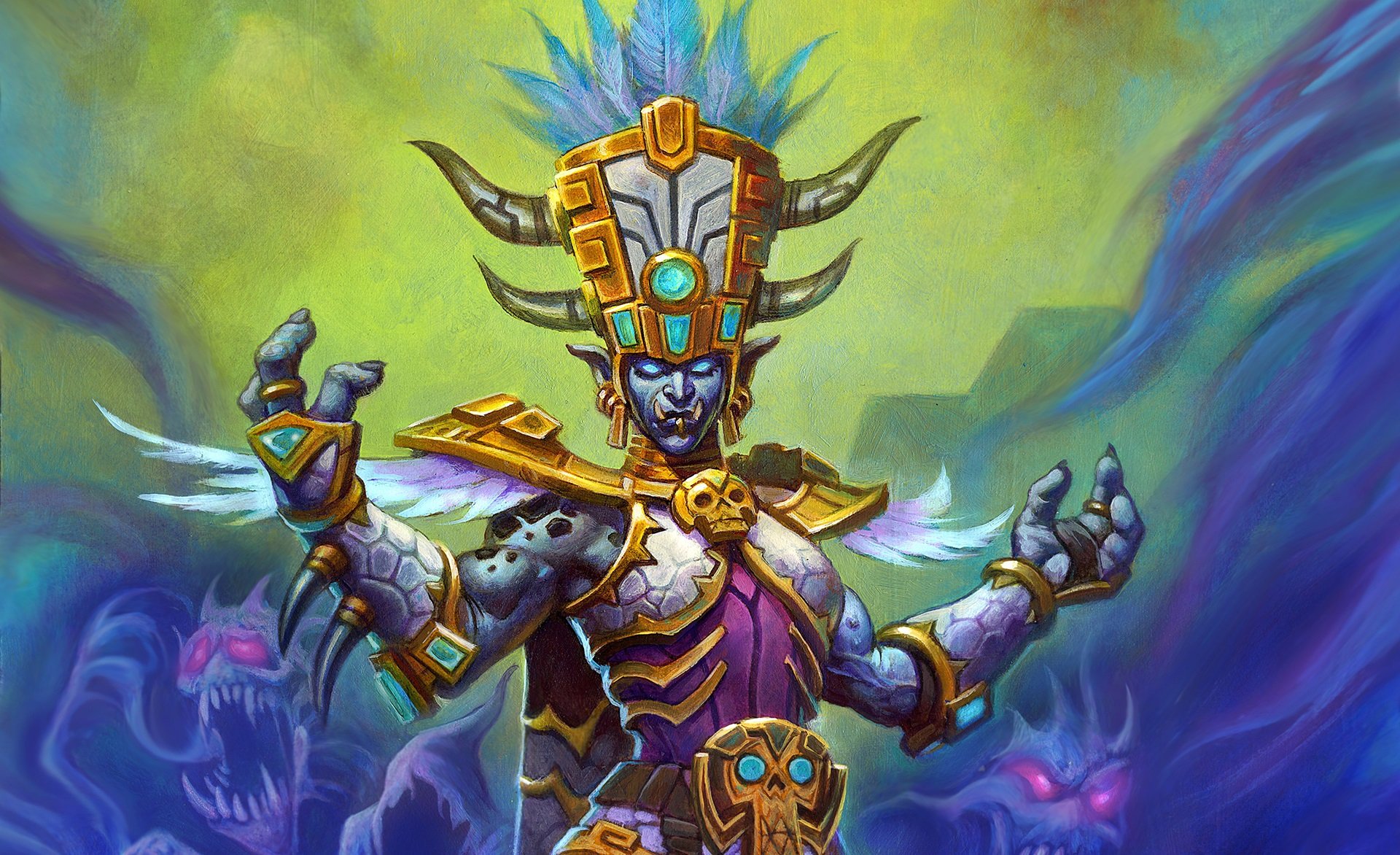 Shacknews has been working on our card breakdowns, as usual. However, we've been saving a special section for the aforementioned Loas, Spirits, and Champions, given their prominent role in the expansion's motif. For today, Shacknews puts this series to bed with the Priest. But first, in case you need to catch up:

With that out of the way, let's wrap this sucker up.

Card Analysis: You can always count on Priests for maximum shenanigans.

Combo Priest players will work overtime figuring out how to get the most aggravating Exodia combo up and running. But when there's language like this, there's definitely a one-turn-kill hiding in there somewhere.

Talanji's effect means that any minion that didn't start in your deck will hit the field. So anything off of Zola the Gorgon or off of various Priest spells like Thoughtsteal or Devour Mind. Oh, did you find a Deathwing? Cool! Now it's on the board on Turn 8.

But that's just the smallest sample of what Princess Talanji is capable of. Have you met her friends?

The Spirit - Spirit of the Dead

(1) Spirit of the Dead (0/3)
Type: Minion
Class: Priest
Rarity: Rare
Stealth for 1 turn. After a friendly minion dies, shuffle a 1-Cost copy of it into your deck.

Hey, are you a Quest Priest? You're going to want to look at this guy. With Spirit of the Dead on the board, it means all of those Deathrattle minions are going to go right back into your deck, discounted to just 1 mana. Yes, that can even include Amara, Warden of Hope, if you can somehow pull that off.

Don't be afraid to use Priest spells for additional shenanigans, either. How about Power Word: Replicate to create a 5/5 copy of Spirit of the Dead to keep the assembly line rolling. And go ahead and use Shadow Essence to call forth a 5/5 copy of one of those minions that found its way back into your deck.

Carnivorous Cube will love this! The Cube will take out any friendly minion and shuffle a 1-Cost copy into the Priest player's deck. Two more of those minions will still come out whenever the Cube gets dispatched. Ideally, it'll get dispatched with the Spirit of the Dead on board, so you can also get a 1-Cost Carnivorous Cube.

The Cube is what offers the greatest potential for Spirit of the Dead to be broken. And if you have card draw tools, you can get to those 1-Cost minions faster.

Oh fine, you still want a shortcut. Then let's take a look at...

The Loa - Bwonsamdi, the Dead

Card Analysis: Now this is a killer play. Bwonsamdi will fill up your hand with 1-Cost minions, which should ideally be any copies created by Spirit of the Dead. If it's done on Turn 8 or later, just play one of those minions so that there's no overdraw on the next turn. Of course, if you're absolutely okay with milling a card, go ahead and use the new Surrender to Madness spell before playing Bwonsamdi. He'll draw those 1-Cost minions with increased +2/+2 stats and their discounted cost will offset the lost Mana Crystals.

Bwonsamdi's 7/7 stats are mildly threatening on their own, but he likely won't be played alone and whatever shows up in the Spirit of the Dead pile is likely to hurt. So don't sleep on the Priest player out-zooing the zoo decks in the late game.

Bwonsamdi plays exceptionally well with his friends, so let's skip right ahead to...

It is highly likely that if you're facing a Priest and you see one of these cards, you'll be dealing with all of these cards. They have arguably the best synergy out of any of these teams, all operating for the greater goal of overwhelming the opponent through sheer numbers.

Spirit of the Dead's role is in getting as many 1-Cost copies into the Priest's deck as possible. That can using one copy early on and trading early-game minions in and using a second copy in the late game and combining with Carnivorous Cube to get bigger fish out there.

Once the Priest deck is filled with 1-Cost minions, Bwonsamdi can draw them into the Priest's hand. Play a few of those minions alongside Bwonsamdi to make a formidable board. If the board gets cleared, play Princess Talanji and get everything on the board.

There's always the chance for board clears, so don't be afraid to use the new Seance spell to make a copy of either of these Legendaries. Or even make a copy of Spirit of the Dead, if you need to get the assembly line rolling again.

The key to success with the Priest deck will be somehow parlaying this into a killer combo. Wild players running Highlander decks can do some heavy damage with a bunch of 1-Cost minions and Shadowreaper Anduin. Meanwhile, the Standard player will continue to look out for the two cogs in any Exodia deck: Prophet Velen and Malygos. If either of them come out and get added to the 1-Cost train, expect to see a Mind Blast that likely blows you away in a single hit.

And that's it! That's all nine classes analyzed! All that's left are the remaining cards from this expansion, so look for us to hit the Lighting Round on Tuesday. Hearthstone: Rastakhan's Rumble is set to release tomorrow, December 4.