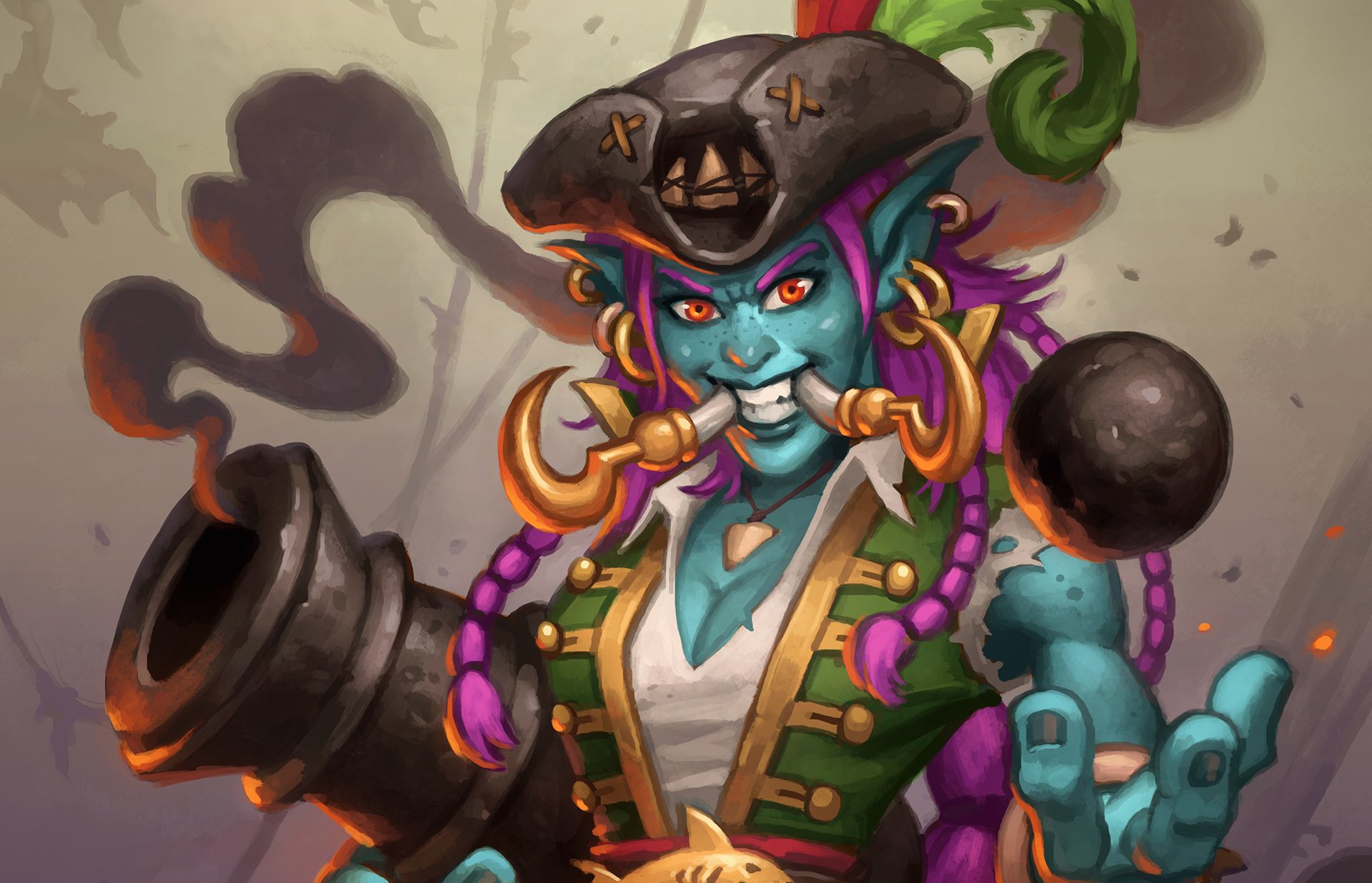 Shacknews has been working on our card breakdowns, as usual. However, we've been saving a special section for the aforementioned Loas, Spirits, and Champions, given their prominent role in the expansion's motif. For today, Shacknews moves on to the next set of gladiators by looking at the Rogue. But first, in case you need to catch up:

Card Analysis: Y'arr! Pirates be back, matey! Captain Hooktusk will take three of the Rogue's Pirates and put them on the board with Rush. This can be incredibly useful for the Rogue player, especially if they're packing Cursed Castaway and Southsea Captain. The new Ticket Scalper will combo with this card nicely, drawing two card with its Overkill effect.

Meanwhile the Wild Rogue player stands to score even more booty from this Legendary, thanks to some of the Pirate and Pirate-adjacent cards that have rotated out. Ship's Cannon is flat-out dangerous with Captain Hooktusk, firing off four times. Meanwhile, if Skycap'n Kragg doesn't get drawn out, it can definitely be played for a lot cheaper with these new Pirates on the board.

The big downside to Captain Hooktusk is her stat line. A 6/3 stat line for 8 mana isn't particularly good, even if it gets boosted by Southsea Captain. This is a Legendary that's being played for its Battlecry, so make the most of it.

The Spirit - Spirit of the Shark

Yeah, this is going to hurt a lot. Blizzard has tried to mitigate the effect of Spirit of the Shark by making it the most expensive of the Spirit cards. It costs a full 4 mana to get on the board. But even on the turn it's summoned, it could be devastating.

Look at it this way. Here's a potential Turn 10 play:

Doing the math, if Battlecries and Combos trigger twice, Southsea Deckhand goes from a 2/1 to a 10/1 Charge minion (assuming the Rogue has its Hero Power active), while Eviscerate strikes for 8 face damage each. Assuming there are no Taunts, that's 26 face damage! That's a potential finisher right there. Between this and Edwin VanCleef, Spirit of the Shark has the potential to be one of the Rogue's most powerful new cards.

Wild Rogues will love this thing, too. Tinker's Sharpsword Oil now grants +6 Attack to a minion. Say hello again, Southsea Deckhand! Jade Rogues have something to rejoice about, too, with Jade Shuriken summoning two Jade Golems.

The Loa - Gral, the Shark

(5) Gral, the Shark (2/2)
Type: Minion - Beast
Class: Rogue
Rarity: Legendary
Battlecry: Eat a minion in your deck and gain its stats. Deathrattle: Add it to your hand.

Card Analysis: Gral is an intriguing Legendary, taking one of the Rogue's minions, eating its heart, and gaining its strength. The idea here is that while it should theoretically be a big blow to the Rogue player to have one of its minions eaten up, they'll get it back whenever Gral dies. That's all well and good, in theory. The trouble is, Silence has been a tech choice for almost any deck worth its weight for the past couple of year. And Silence is brutal here, bringing Gral down to 2/2 and also removing the minion it ate from the game.

Is there a way around this? Sort of. Necrium Vial and Necrium Blade guarantee that the Gral Deathrattle goes off. So even if Silence goes off, at worst, it only reduces Gral to 2/2. The minion it consumes should be safe.

That means Gral could be a tough out, depending on the minion it consumes. Players just need to be careful that it's a minion that's worth its weight. Deathrattle Rogues might want to think twice about packing that Devilsaur Egg.

There's a lot of room for shenanigans with the Rogue's team. Even without a lot of Pirate options, Captain Hooktusk can flood the board fast and go a long way towards clearing the board. If it pulls out Cursed Castaway, it could bring out one of the Rogue's valuable Combo pieces.

That sets the table for Spirit of the Shark and Gral the Shark. With Spirit of the Shark on the board, Gral gets a nice stat buff by eating two minions. And working in conjunction with Necrium Vial or Necrium Blade, those minions still get a nice safety net, just in case of any Silence nonsense.

The Rogue's Sharks won't always work in a cohesive unit. Building a deck around Pirates and Combo pieces doesn't always seem compatible. But this is a fearsome team in its own right and gives the Rogue some key tools to both help it flood the board and also end the game out of nowhere.