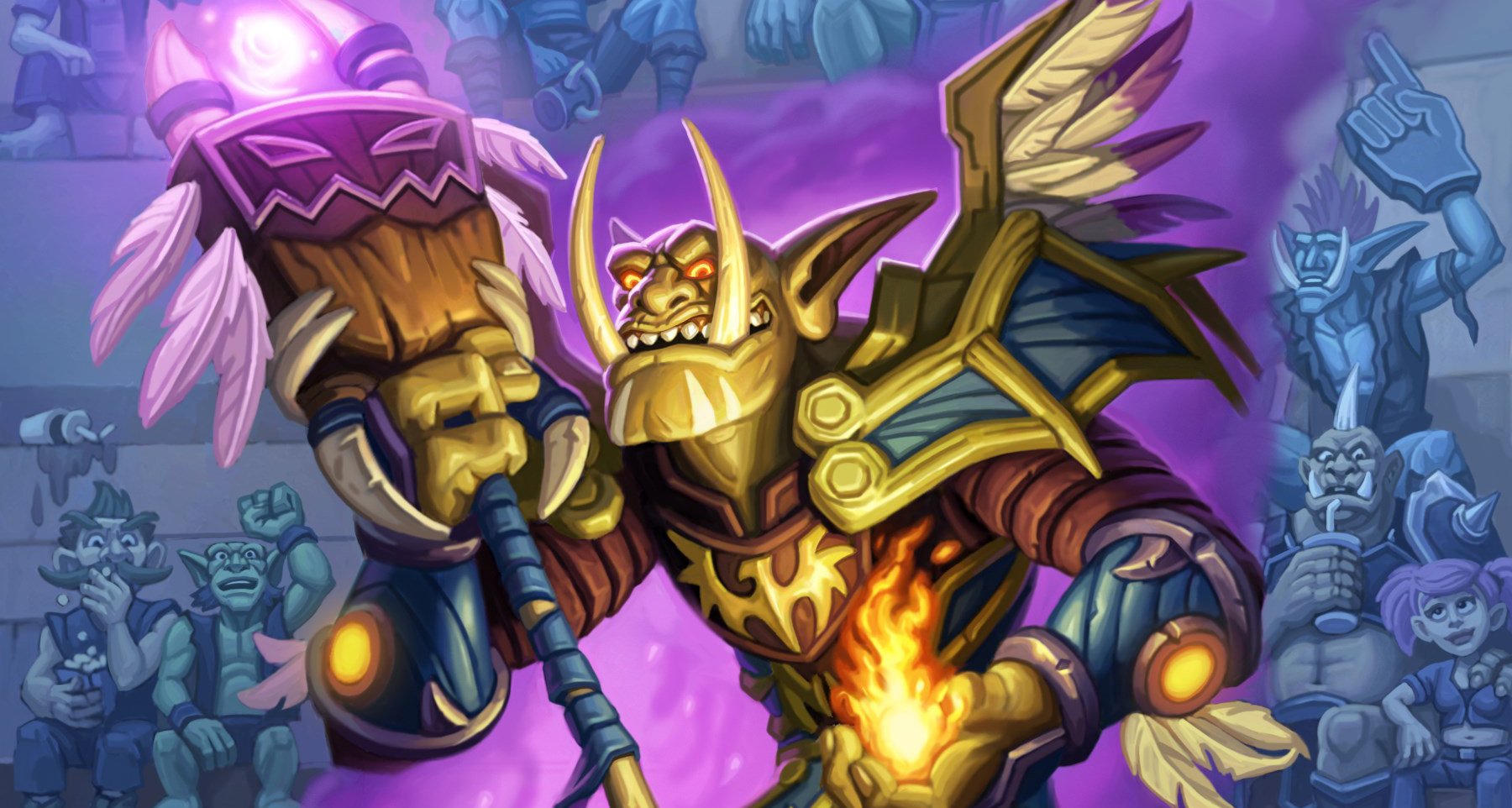 Shacknews has been working on our card breakdowns, as usual. However, we've been saving a special section for the aforementioned Loas, Spirits, and Champions, given their prominent role in the expansion's motif. For today, Shacknews is looking at the first of our gladiator trio for the Mage. Let's begin.

(8) Hex Lord Malacrass (5/5)
Type: Minion
Class: Mage
Rarity: Legendary
Battlecry: Add a copy of your opening hand to your hand (except this card).

Card Analysis: This card is a bit of a thinker, because it's not about to scare anyone with its basic 5/5 stat line. For an 8-Cost card, you had better get your bang for your buck, but whether that happens is ultimately going to depend on what exactly your opening hand looks like.

Big Spell Mage could get a major boost from the Malacrass Battlecry, allowing Mage players to get fresh copies of heavy-hitting area-of-effect spells like Blizzard or Flamestrike. Though that does mean getting off to a bit of a slower start. With that said, the Malacrass Battlecry might be a boon against aggro decks, because it means the Mage player can burn their Arcane Artificer early and start armoring up, knowing it'll be back later down the line.

Wild players can be really annoying here, because any opportunity to get more copies of Ice Block is one a Mage player will happily take. That will make the Mage player that much harder to kill and could lead to some marathon games.

Regardless of the format, be on the lookout for Leyline Manipulator turning those new opening hand copies into potential wombo combo pieces. If the opponent can discount either Archmage Antonidas, Sorcerer's Apprentice, or Molten Reflection, you could be on the wrong end of an Exodia combo.

The Spirit - Spirit of the Dragonhawk

Card Analysis: This minion essentially turns the Mage Hero Power into Shooting Star, hitting any minion on the board for 1 damage. That doesn't sound too bad... until Frost Lich Jaina shows up.

Spirit of the Dragonhawk theoretically makes it so that the Death Knight Mage can wipe out three minions and summon three Water Elementals in a single play. Paired up with Daring Fire-Eater, this has great potential to hurt a lot. Paired up with Ice Walker, this can get very annoying. And with Pyromaniac hanging around as a very solid 3-Cost minion, the Mage player can easily keep their hand refreshed.

The Loa - Jan'alai, the Dragonhawk

Card Analysis: Just when you thought he was gone from Standard forever, here's Ragnaros the Firelord, back with a vengeance.

The unique conditions for bringing Ragnaros to the board leaves room for trickery. First off, forget Jan'alai itself. Those 4/4 stats are exceptionally weak and totally inconsequential. No, the cheese is in the Battlecry, so let's focus on that.

Getting to 8 damage with a Hero Power shouldn't be too difficult. Even without Spirit of the Dragonhawk, Frost Lich Jaina almost assuredly means the Mage player will be using their Hero Power often. Getting Ragnaros on the board should be fairly simple. But to truly style on an opponent, why stop at one Ragnaros?

Wild players are thinking, "Ah, yes. Use Brann Bronzebeard." Sure, you can do that if you want to do this the easy way. The Standard player, however, will have to think a little bit harder.

Earlier, there was some talk about Malacrass and Leyline Manipulator. So what happens when Leyline Manipulator is able to take some opening hand Sorcerer's Apprentices or Molten Reflections and discount them? Or what if there's a discounted Molten Reflection off a Primordial Glyph? It means there's room for multiple Ragnaroses! (Ragnarosises? Ragnarosi?) Jan'alai is just cheap enough at 7 Mana to make deploying multiple Firelords in a single turn a real possibility. Now picture this as an addition to the Open the Waygate Quest. Having Ragnaros attack in back-to-back turns could be a backbreaker and making this happen isn't as hard as it sounds. Experiment with this idea, because you may be pleasantly surprised by what you find.

It doesn't get much better than the aforementioned Ragnaros army. The Spirit of the Dragonhawk can help meet the Hero Power conditions, Malacrass can set the table with fresh copies of the necessary ingredients, and Jan'alai will get the Firelord on the board. Surviving long enough to get this combo rolling could be a challenge, but with enough area-of-effect control spells, it should be do-able.

Ultimately, for those looking to center their deck around Frost Lich Jaina, Malacrass is optional. Those 5/5 stats aren't going to cut it and it's possible to win without that opening hand copy. But Spirit of the Dragonhawk is a major boost to the Frost Lich Jaina Hero Power, while Jan'alai can at least summon one copy of Ragnaros. Remember, Ragnaros is an Elemental, so its attack will heal the Death Knight hero for 8. With that in mind, Big Spell Mage or a strong Elemental deck will probably be the way to go with these cards.