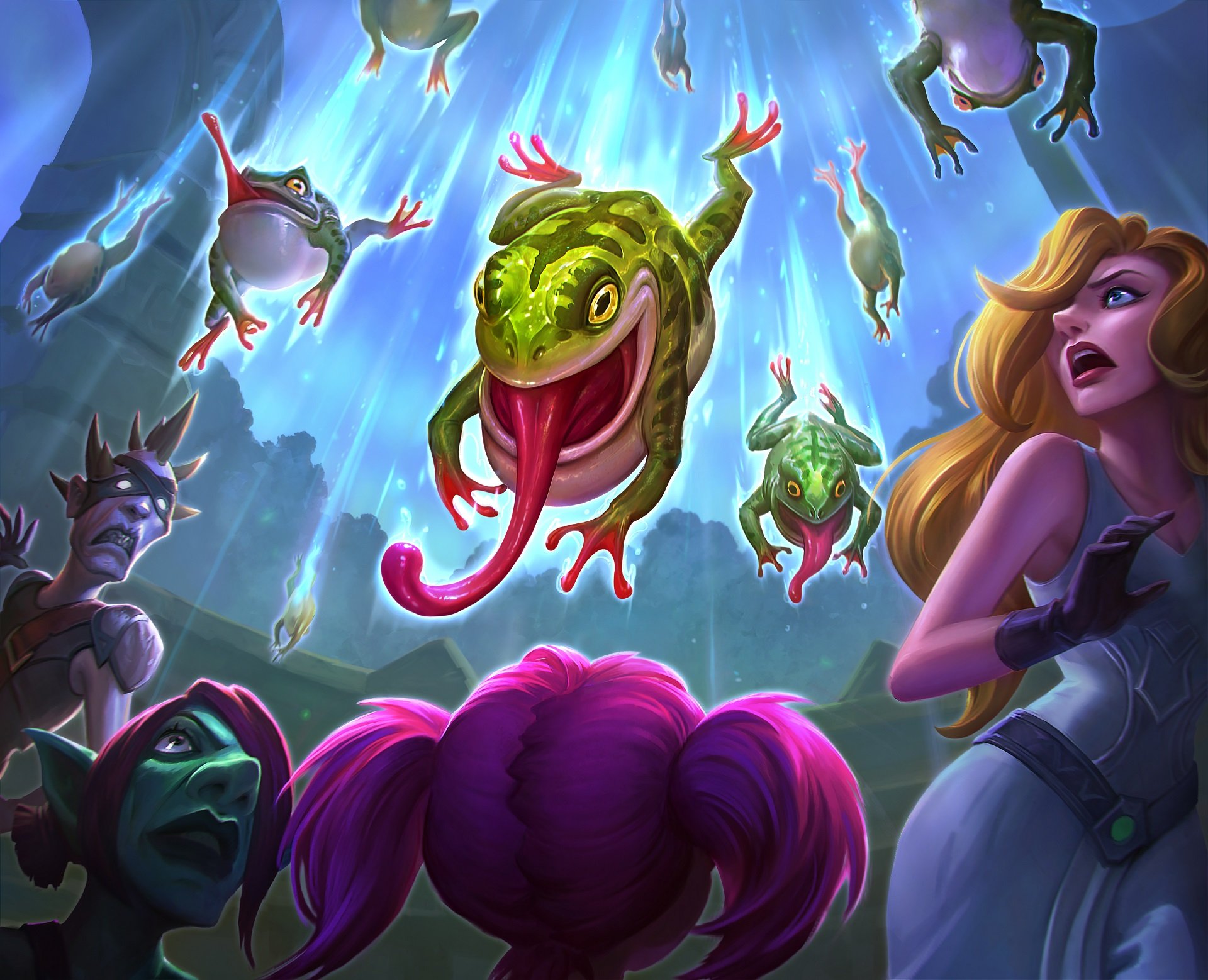 It's almost time to rumble, so let's check out the upcoming cards for the final expansion in the Year of the Raven.

Analysis: Say hello to the new Overkill mechanic, which grants a bonus if you kill a target with room to spare. This is the new Warrior weapon that's tied to this mechanic and it should be fun to see just what this can do. Think of it as a harder-hitting Fool's Bane and one that can go face at the end of the turn.

There's some combo potential here with Heroic Strike, which will up the Attack power to 8. The downside is, the Warrior player will have to watch their health carefully and make sure they don't go overboard with this weapon. Wild players may have an easier time with this if they pack in Violet Illusionist.

There's potential in this card and experimenting with it for the first few days should be interesting.

Analysis: Pirates are looking to make a comeback in this expansion. Sharkfin Fan as a vanilla 2-drop isn't terrible, with respectable 2/2 stats. Its effect is gravy, calling in more Pirates the more the player Hero attacks. Rogues will get good use out of this, with a Hero Power designed to keep them attacking.

Sharkfin Fan may also find a home in Wild decks, giving a boost to old-school Pirate Warriors. Cards like Fiery War Axe and Southsea Captain could make Sharkfin Fan quite a nuisance.

(3) Surrender to Madness
Type: Spell
Class: Priest
Rarity: Epic
Destroy 3 of your Mana Crystals. Give all minions in your deck +2/+2.

Analysis: I've racked my brain over just how effective this card can be. It's a total high-risk, high-reward scenario, because it'll leave you with no Mana Crystals to work with in the early game.

On the other hand, think about the early-game minions that can get a boost from this. Northshire Cleric becomes a 3/5. Or how about Radiant Elemental becoming a much harder to kill 4/5, while also helping overcome your Mana deficiency by discounting your spells?

It's hard to picture Zoo Priest becoming a thing, but watch out for this guy in a Combo Priest deck. Beware of this as a Lyra the Sunshard drop, too, because this might ruin any Arena player's day in the later turns.

Analysis: This is a nice early-game drop for the Paladin and one that can get out of control quickly. It's a much better version of the Druid's Astral Tiger, in terms of cost, stats, and effect. Giving it Blessing of Might on Turn 3 removes a lot of early threats, while also placing a 2-cost 4/3 in your deck.

Clever Paladin players will know just how to keep this minion coming, too. Witchwood Piper is a minion worth keeping around, as it can often put the Immortal Prelate right back in your hand.

It's almost a certainty that if this card sees a lot of play, opponents will start to throw in tech Silence minions. But if you can bait out that Silence minion, it'll leave nothing to stand in the way of Lynessa Sunsorrow. So keep that in mind.

Analysis: Fun fact: After concluding our interviews with Giovanni Scarpati and Stephen Chang, I pulled up Void Contract on my phone as an example of playing around with mechanics. It got a big laugh out of both of them, because they're eager to see the kind of shenanigans it can pull off.

In particular, this could be a nightmare for Shudderwock decks. Even if Void Contract doesn't obliterate the Shudderwock itself, it's likely to blow up at least one of its key pieces, like Grumble, Worldshaker.

This might not even be that much of a high-risk move for the Warlock player, since they'll have drawn most of their deck by the time Turn 8 rolls around. They might sacrifice one of their own win conditions, but when confronted with a Shudderwock Shaman or a Malygos Druid, it's a risk worth taking.

The major downside to this spell is that it essentially means you're passing on Turn 8. And that opens the door for the board state to get out of control.

Analysis: It's hard to imagine this Battlecry doing much damage. It'll be about as effective as Savagery. But as a vanilla 2-drop with 2/3 stats, this isn't bad. It might prove to be a decent choice in Arena.

Analysis: This is a twist on an old Hunter staple. It's a tweaked Alleycat, only there are two tokens and both of them have Rush. It's certainly not a terrible opening gambit for the Hunter player, though constructed Hunters will probably still opt for Dire Mole. I'd actually expect this to find its way into constructed decks more once Dire Mole rotates out.

In the meantime, Springpaw is a solid Arena choice. Try combining this with Crackling Razormaw and high-rolling into Poisonous.

Analysis: Deathrattle Hunters have been a big part of the meta for the past expansion and this is only going to embolden them. Think of this as a much nastier Flanking Strike. To score the Devilsaur, a minion needs to have two or less health remaining, which shouldn't be a problem, thanks to Hunter's Mark.

The trouble with Baited Arrow is that you have to know the Overkill will kick in to maximize its effect. Otherwise, just stick with Flanking Strike.

Analysis: In an Arena scenario, having three 2/4 Toads with Taunt is a nice stall tactic, especially against zoo decks. But it's a costly stall tactic with a whopping 3 Overload. Because of that drawback, it's hard to imagine packing this into any constructed deck. It's most likely to pop up as a random Hagatha or Witch's Cauldron drop. It's also a solid Arena choice, offering a cheaper Phantom Militia.

But as is often the case with minions like this, be wary of the jerk packing the tech Mossy Horror.

Analysis: This certainly isn't the first card to utilize the Mage's Hero Power for an effect and this is a nice one for the early game. It's just hard to find a good place for this in the constructed Mage game.

But expect to see this guy a lot in Arena. Burly 3/4 stats on a 3-drop are hard to come by. That effect is just a nice bonus.

(6) Cannon Barrage
Type: Spell
Class: Rogue
Rarity: Epic
Deal 3 damage to a random enemy. Repeat for each of your Pirates.

Analysis: This is a spell that's entirely dependent on how many Pirates the Rogue can squeeze onto the battlefield. And it's hard to think of a way to get enough Pirates out there to make this spell work, but the expansion is still young and there may be some cards still on the way.

If the board does get flooded with Pirates, this becomes extremely dangerous, particularly when paired with Preparation. One thing to watch out for: Clever Rogues finding ways to squeeze Malygos onto the field to make this hurt a lot more.

That's all for now. Be on the lookout for more card breakdowns, as well as our individual focuses on the class Loas, Spirits, and Champions. Hearthstone: Rastakhan's Rumble is set to release on December 4.