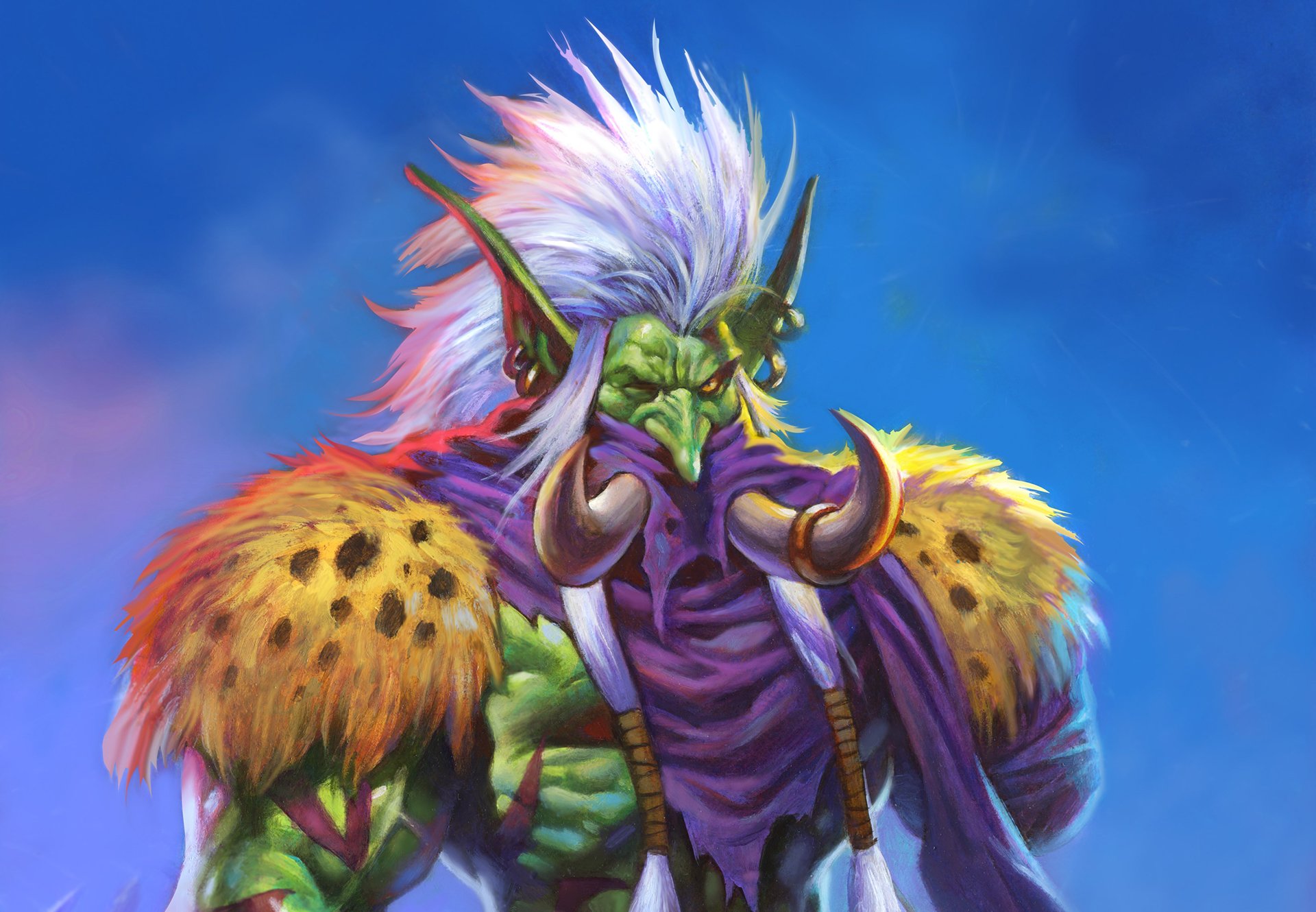 Shacknews has been working on our card breakdowns, as usual. However, we've been saving a special section for the aforementioned Loas, Spirits, and Champions, given their prominent role in the expansion's motif. For today, Shacknews moves on to the next set of gladiators by looking at the Hunter. But first, in case you need to catch up:

Card Analysis: What's better than Yogg-Saron? How about a Yogg-Saron that replays only your spells? Yes, there's still a potential for it all to backfire, but it feels much less likely for players who know what they're doing.

Zul'jin doesn't quite feel like he needs to be a Hero Card, but it does sort of make sense, because with a Battlecry as powerful as this one, why should the player get a big body to go along with it. Then again, the Yogg train stopped as soon as that body was destroyed and there's no such concern about that in this case. So yeah, that makes Zul'jin pretty nifty.

Needless to say, he'll work beautifully in the Spell Hunter deck. Zul'jin can replay all of the Hunter's valuable Secrets, summon spells like Animal Companion, and enemy removal spells like Crushing Walls. If the Spell Hunter's deck is curated carefully, Zul'jin is a potent play, one that could very well put the Hunter in a good position to win.

If by some chance the Hunter doesn't win with this play, that's totally fine. Deathstalker Rexxar is still around for the late game. And you'll probably want to keep one of those handy, because Zul'jin's Hero Power is pretty lame, by comparison. While it's nice to hit any target for 2 damage, it isn't nearly as cool as the Death Knight's Zombeasts.

One wouldn't think that Zul'jin would play too nice with the Hunter's Loa and Spirit, but some careful curation could make this combo work just fine.

The Spirit - Spirit of the Lynx

Card Analysis: Spirit of the Lynx is unique in that its power focuses on powering it specifically. It's a bizarro Scavenging Hyena, powering up for each Beast summoned.

There are a lot of cards to make this work, but Unleash the Hounds should be the first one that comes to everyone's mind. Depending on how many minions are on the opposite side of the board, Spirit of the Lynx could get boosted handily and would be a tough removal, since it has Stealth for its first turn.

Anything that generates multiple beasts should offer Spirit of the Lynx a big boost. Emerald Spellstone is another one that could give the Spirit a big kick. Basically aim for anything that can pop out multiple Beasts in a single turn, whether it's Jeweled Macaw in Standard or Alleycat in Wild.

If the Spirit stays alive in the late game after deploying Unleash the Hounds or any other summon spell, Zul'jin can be played on the next turn and re-summon all of those Beasts. That'll make the Spirit even bigger. But you know what else can help make the Spirit bigger? A lot of 1-Cost minions.

No, not those 1-Cost minions, but those could work, too. Think something else.

The Loa - Halazzi, the Lynx

And that's fair. Nobody is going to die when facing down a hand full of 1/1 Lynxes. But what happens when those Lynxes are combined with the Spirit of the Lynx? Things start to get a little more scary, as the big bad Spirit starts to get bigger and bigger.

There are also some other utility uses for these Rush minions. How about Crackling Razormaw taking any of these 1/1s and making them Poisonous? Toxmonger can do the same thing, much more efficiently. How about giving them Cybertech Chip and potentially turning them all into valuable Mechs? They even play great with Stampede, which turns them all into more valuable Beasts.

Am I forgetting anything?

Oh, right! Quest Hunters, you need 1-drops, right? Use these Lynxes and complete The Marsh Queen Quest with no trouble at all.

The key component here appears to be Spirit of the Lynx, which can be built around Halazzi's Lynxes, Unleash the Hounds, the Quest Hunter 1-drops, and any summon spells re-deployed by Zul'jin. Depending on how much Spirit of the Lynx can get beefed up, it can stand as a potential win condition.

There isn't much more to add that hasn't already been noted, but don't be afraid to experiment with Quest Hunter to make the most of all three of these cards. Zul'jin can even deploy the Quest again and it should be easy to complete with Carnassa's Brood. If the Quest Hunter can strike fast, it should be able to out-zoo any Warlock on the road to victory.