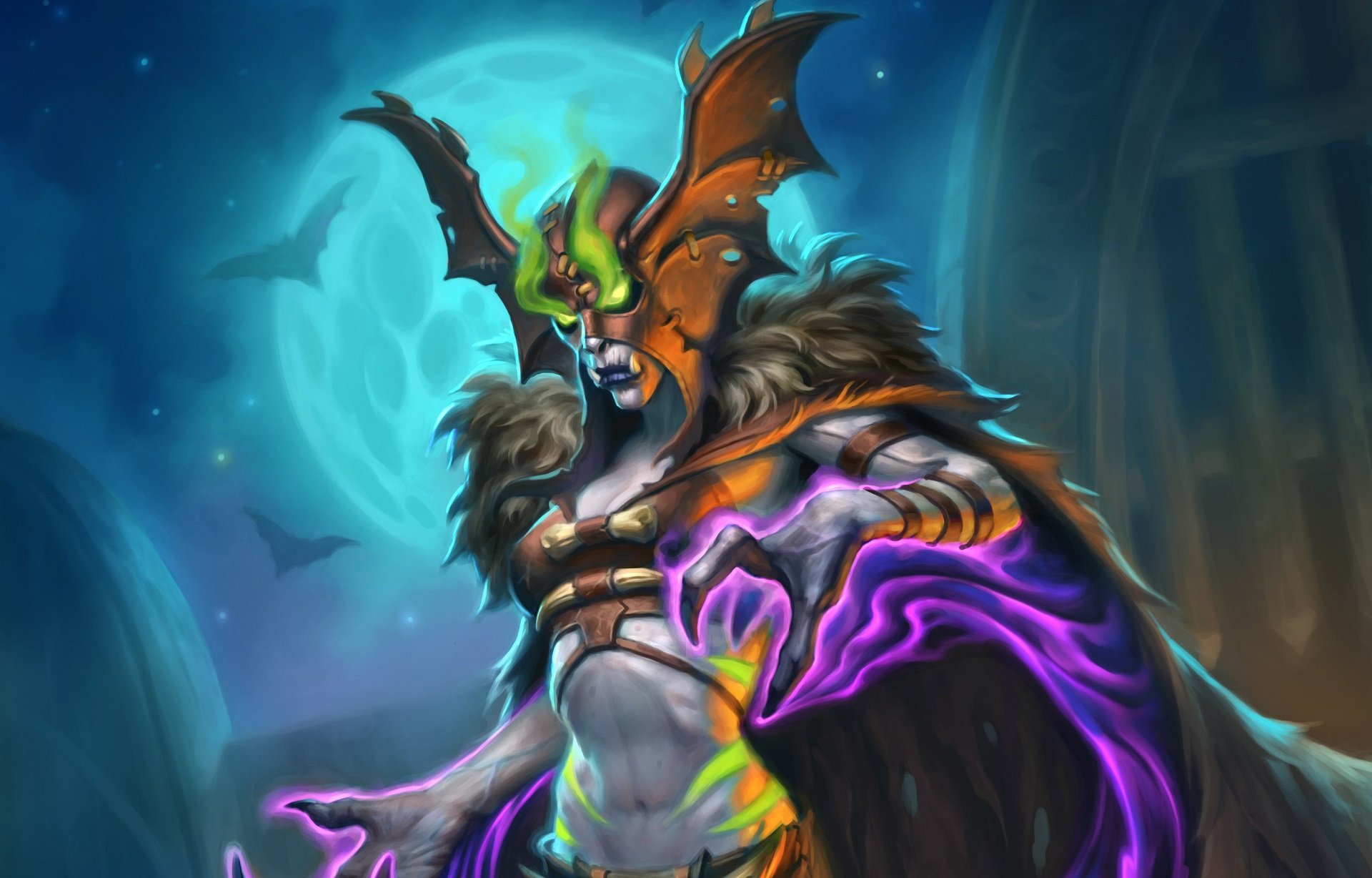 Shacknews has been working on our card breakdowns, as usual. However, we've been saving a special section for the aforementioned Loas, Spirits, and Champions, given their prominent role in the expansion's motif. For today, Shacknews moves on to the next set of gladiators by looking at the Warlock. But first, in case you need to catch up:

(4) High Priestess Jeklik (3/4)
Type: Minion
Class: Warlock
Rarity: Legendary
Taunt, Lifesteal: When you discard this, add 2 copies of it to your hand.

Card Analysis: This is going to be a bit of a tricky one to analyze when the Team Synergies section comes up later. But right now, let's analyze this Legendary in a vacuum.

In a vacuum, High Priestess Jeklik is a solid card for a Discolock deck. There haven't been a lot of viable Warlock Quest decks since the release of Journey to Un'Goro almost two years ago. The High Priestess is another attempt to get this ball rolling by minimizing the risk of discarding cards. It does slightly make the board-clearing Cataclysm spell a little more usable, ensuring that the Warlock player winds up retaining two copies of the High Priestess. If the Quest gets online, the High Priestess' Taunt can help protect the continually-spawning 3/2 Imps, allowing them to wreak havoc.

Zoo Warlock decks might also find a place for this Legendary. Certain variations of the popular zoolock deck currently filling the meta include cards like Soulfire and Doomguard. Up the odds of maintaining a good hand by packing this card and aiming for a discard. Worst case scenario, it's just a standalone 3/4 with Taunt and Lifesteal. There are certainly worse outcomes.

There are some other helpful cards from this expansion that will help make the High Priestess a little more effective, but we'll touch on those in just a bit.

The Spirit - Spirit of the Bat

Card Analysis: The Spirit of the Bat is practically designed with the Zoolock player in mind. And with such a low cost to get on-board, it's bound to boost up the Warlock's hand quickly.

Let's look at some of the cheaper and more valuable minions in the standard Zoolock hand that can get a big boost out of Spirit of the Bat's effect. Doubling Imp will get a big buff out of increased stats. The same goes for Saronite Chain Gang. How about giving a big buff to Happy Ghoul, which will retain its free cost if the Warlock player is healed? And how about gearing up for that finishing play by continually buffing up Leeroy Jenkins until it does well over 10 damage in a single roll?

Rastakhan's Rumble is also adding more cards that are set to buff the Warlock player's hands, which is inevitably going to make Devilsaur Egg a viable addition for zoo decks. So be sure to combine Spirit of the Bat, Devilsaur Egg, and the new Grim Rally card, which will give the Warlock's hand a double buff and also summon a 5/5 Devilsaur.

Of course, you can also use Spirit of the Bat to buff up...

(8) Hir'eek, the Bat (1/1)
Type: Minion - Beast
Class: Warlock
Rarity: Legendary
Battlecry: Fill your board with copies of this minion.

Card Analysis: Handbuff Warlocks were built purely for this Legendary. There's really only one central principle for Hir'eek the Bat. It's to buff it up as much as possible before lowering the boom near the end of the game.

While the idea of playing a board full of 5/5, 8/8, or even 10/10 Bats sounds awesome, Warlock players must not be careless with this Legendary. Let's get this out there out of the gate: Priest players are going to prove to be a hard counter for Hir'eek the Bat plays. Shadowreaper Anduin ends everyone's day, no matter how big those bats are. Meanwhile, Psychic Scream will send everything back into the opposing deck and remove all of their buffs, making them slightly easier to deal with. And while it's not likely to pop up in a constructed deck, Priests can whip out a random Mass Dispel can come out at any time, especially if it comes out of a Lyra the Sunshard.

Another way to look at Hir'eek is less as a finisher and more as a late-game stalling tactic. A board full of bats, no matter what the size, can buy a lot of time to deploy more solid winning strategies, like Rin, the First Disciple or Bloodreaver Gul'dan. If the bats can't put the game to bed, get your backup finishers online.

Making these three Warlock cards work is going to take a little bit of extra thought. Spirit of the Bat and Hir'eek the Bat seem to work great together, but High Priestess Jeklik looks on the surface like it belongs in a completely different type of deck. There doesn't seem to be much point in gambling with random discard effects if it accidentally discards your Spirit of the Bat or your Hir'eek.

Fortunately, the rest of Rastakhan's Rumble Warlock cards are seemingly built for making these three cards work in tandem. That's because they're introducing controlled discards. Shriek and Reckless Diretroll are designed to discard only the lowest-cost card. That means it's possible to build a deck and manipulate the current hand to where High Priestess Jeklik is always the lowest-cost card in-hand. That'll ensure multiple copies of this Legendary and, more importantly, it ensures that Hir'eek stays off the Discard pile.

If, by some chance, Hir'eek does see the Discard pile, that's what Soulwarden is around for. Soulwarden will bring back a whopping three cards that were discarded, which can include those earlier Jekliks that might have been sacrificed.

If Spirit of the Bat does its job, those Jekliks and Hir'eek will all have high stats heading into the late game, giving the opposing player more than a handful of minions to deal with.