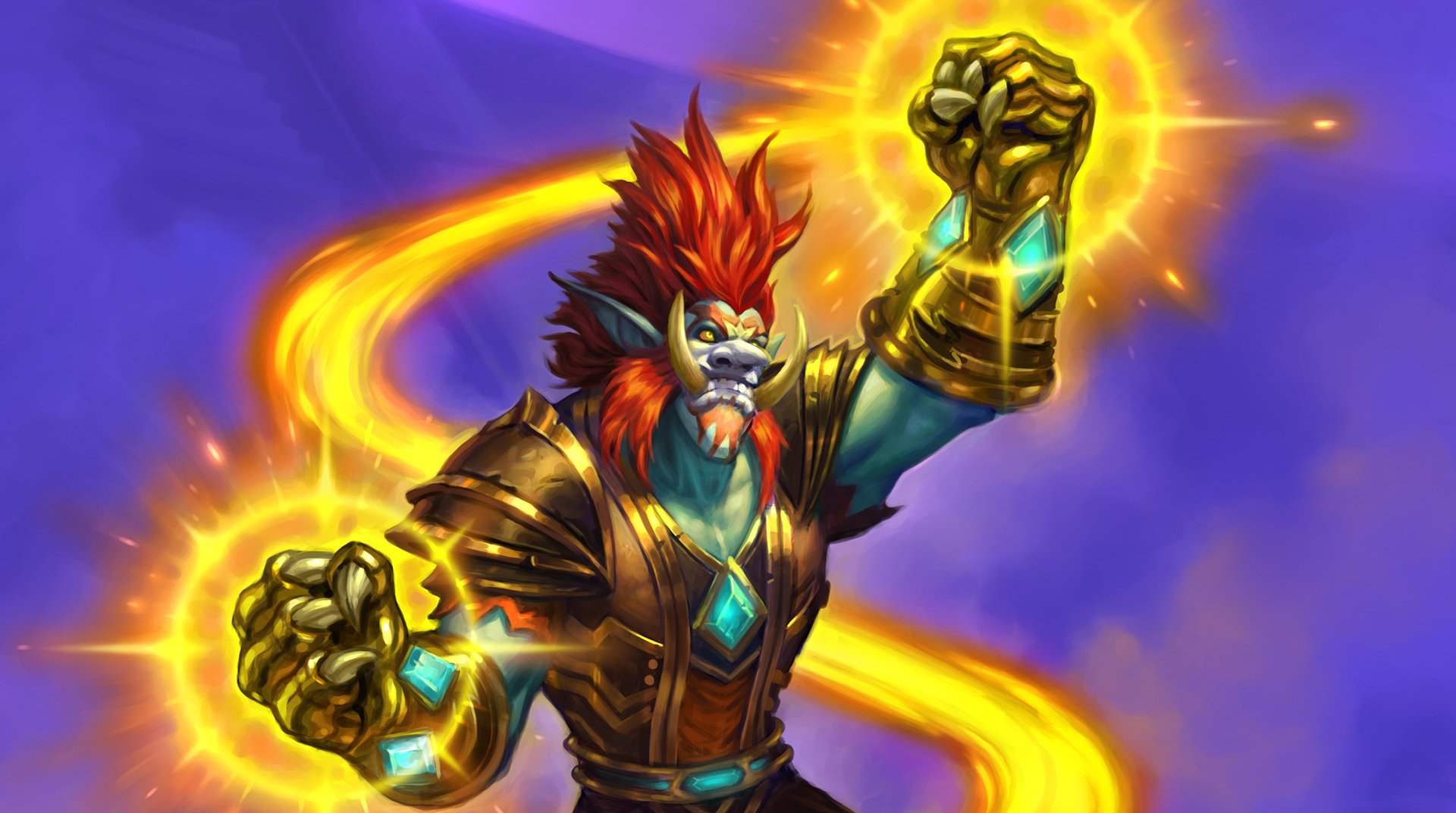 Shacknews has been working on our card breakdowns, as usual. However, we've been saving a special section for the aforementioned Loas, Spirits, and Champions, given their prominent role in the expansion's motif. For today, Shacknews moves on to the next set of gladiators by looking at the Paladin. But first, in case you need to catch up:

So... yeah, about this. This is an incredible card, one that's could very well redefine Paladin decks for this Standard year and next Standard year, too. It is incredibly good and it's hard to think of where to even begin with this one.

Paladins have an abundance of Lifesteal resources, as well as numerous healing spells at the ready. It complements normal constructed staples like Lifedrinker and Rotten Applebaum beautifully. It gives cards like Crystalsmith Kangor, Benevolent Djinn, Chillblade Champion, and even Guardian of Kings a new purpose, giving them chances to help regain that lost health, while the Armor total holds up. How about a reverse Alexstrasza play to bring your own Health total from 1 to 15?

On top of that, it gives Paladin players a chance to bolster up cards that get a boost from healing. Think of Lesser Pearl Spellstone, Lightwarden, Blackguard, or The Glass Knight. Don't forget the new Zandari Templar, which is now suddenly much easier to trigger. And Wild players, how about using this as a partner for Reno Jackson? But make sure to drop your freshly-unnerfed Molten Giants first.

It'd be one thing if High Priest Thekal had a phenomenal effect with bad stats, but 3/4 for a 3-Cost minion is on the higher end of that spectrum, on top of everything else. It means that it has the potential to survive to the next turn, which means creating copies with something like Zola the Gorgon or Baleful Banker?

Be on the lookout for this Legendary, because the Paladin player now has ways to keep games going for the long haul until they get their win condition ready.

The Spirit - Spirit of the Tiger

(4) Spirit of the Tiger (0/3)
Type: Minion
Class: Paladin
Rarity: Rare
Steath for 1 turn. After you cast a spell, summon a Tiger with stats equal to its Cost.

Card Analysis: The Spirit of the Tiger is costly to get on the board, which makes it likely that it'll only see action in the late game. It's hard to imagine anyone laying this down on Turn 4 and passing, unless they're ahead on the board already.

The Tigers themselves are nothing special, but they'll act as fine decoys to divert opponent resources away from the Paladin's other heavy-hitters. Spirit of the Tiger bolstered by a Spikeridged Steed as a Turn 10 play could do some damage.

The trouble here is, many of the effective Paladin spells are cheap. There's Consecration for 4, Divine Favor for 3, and a slew of 1-mana Secrets just waiting to make 1/1 Tigers. Of course, A New Challenger is on its way, which could be a strong complement to Spirit of the Tiger, assuming it survives its turn on board.

It's not going to be the stronger of the Spirits, but something has to balance out that ridiculous High Priest.

The Loa - Shirvallah, the Tiger

Card Analysis: After seeing what the High Priest can do, Shirvallah feels almost underwhelming. That 25 cost is intimidating, much like the nerfed Molten Giant. It doesn't even get those sweet 8/8 stats.

Wild players shouldn't have any trouble getting this big cat discounted to a manageable number. The Murloc Paladin running Anyfin Can Happen, in particular, can get this Tiger down to (0) with no problem.

The Paladin team plays exceptionally well together, led by High Priest Thekal. All three of these cards should find their way into a good Healadin deck. Thekal sets the tone for Paladins to get their healing minions and spells out, while setting up for Spirit of the Tiger to show up in the later game. That's when the more expensive spells will come out, ideally creating larger and larger Tigers.

Ideally, Zola will have created a second copy of Thekal for the late game. By that point, Thekal can re-convert the Paladin's regained health to additional armor, while Shirvallah can be played for cheap to get at least seven of that health back.

Control Paladin hasn't been much of a thing in Hearthstone over the past few years, but with all of the healing tools being handed to the class, the Tigers are making a good case for a Control Healadin deck. It has the potential to run especially rampant in Wild, where Reno Jackson and the un-nerfed Molten Giant will be ready to roll.