Why I Sold Apple Today

I have been an Apple shareholder for nearly two thirds of my life. First as a member of Virtue LLC in the 90s and as CFO of the company for the past 10 years. I have made countless decisions to not sell Apple's stock over that time, but today I decided that a 20,000% gain in 20 years was plenty. I believe the risks to owning the stock outweigh the potential benefits in the near term. I will now provide some reasons that lead me to this decision.

The Board of Directors Keeps Selling Shares 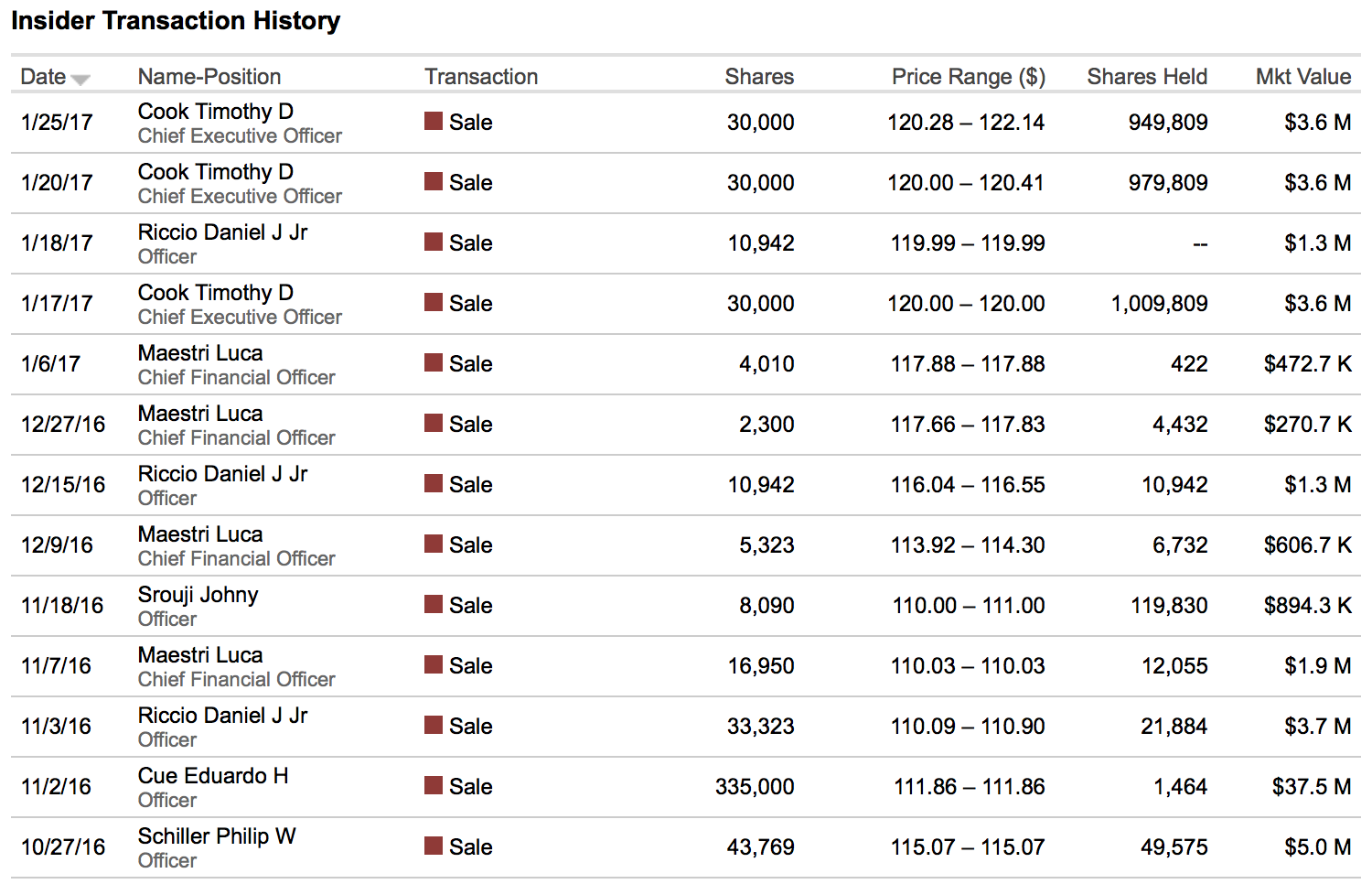 Tim Cook, CEO of Apple, has sold 90.000 shares of Apple Inc.'s stock this year, netting him over $10 million in cash. What's the big deal? He is paid primarily in stock and his bonus was slashed after Apple failed to grow revenues in 2016 for the first time in 13 years. What is concerning about this is how close to the company's earnings release tomorrow that these sales have occurred. This is not a vote of confidence from the head of the company.

Tim's sales still leave him with just under 1 million shares, which is still a large position. What really bothers me is that Luca Maestri, CFO of Apple Inc., only owns 422 shares of the company. Eddy Cue, Apple's senior vice president of Internet Software and Services, only owns 1464 shares. Even Phil Schiller halved his position last year. I woke up this morning owning more shares in Apple than people who have worked there for over 20 years! Why should I have more faith in the company than people who know their product roadmap and potential revenue drivers?

Do They Really Make the "Best Products" Anymore?

Over the past few years, Apple's quality has diminished across their product line. This is most notable in the MacBook Pro line, which solved problems that didn't exist in their 2016 update. The Touchbar replaced the row of function keys (as well as the escape key) with a multitouch display for software keys. The new MacBook Pro also removed the SD card reader and replaced all the ports with USB-C, a decision that has created a plethora of dongles to do anything from connecting the computer to ethernet to connecting iPhones or iPads. The computer costs over $4000 with maximum specifications, but includes hardware inferior to higher-end PC laptops that consumers could purchase for half of the price. 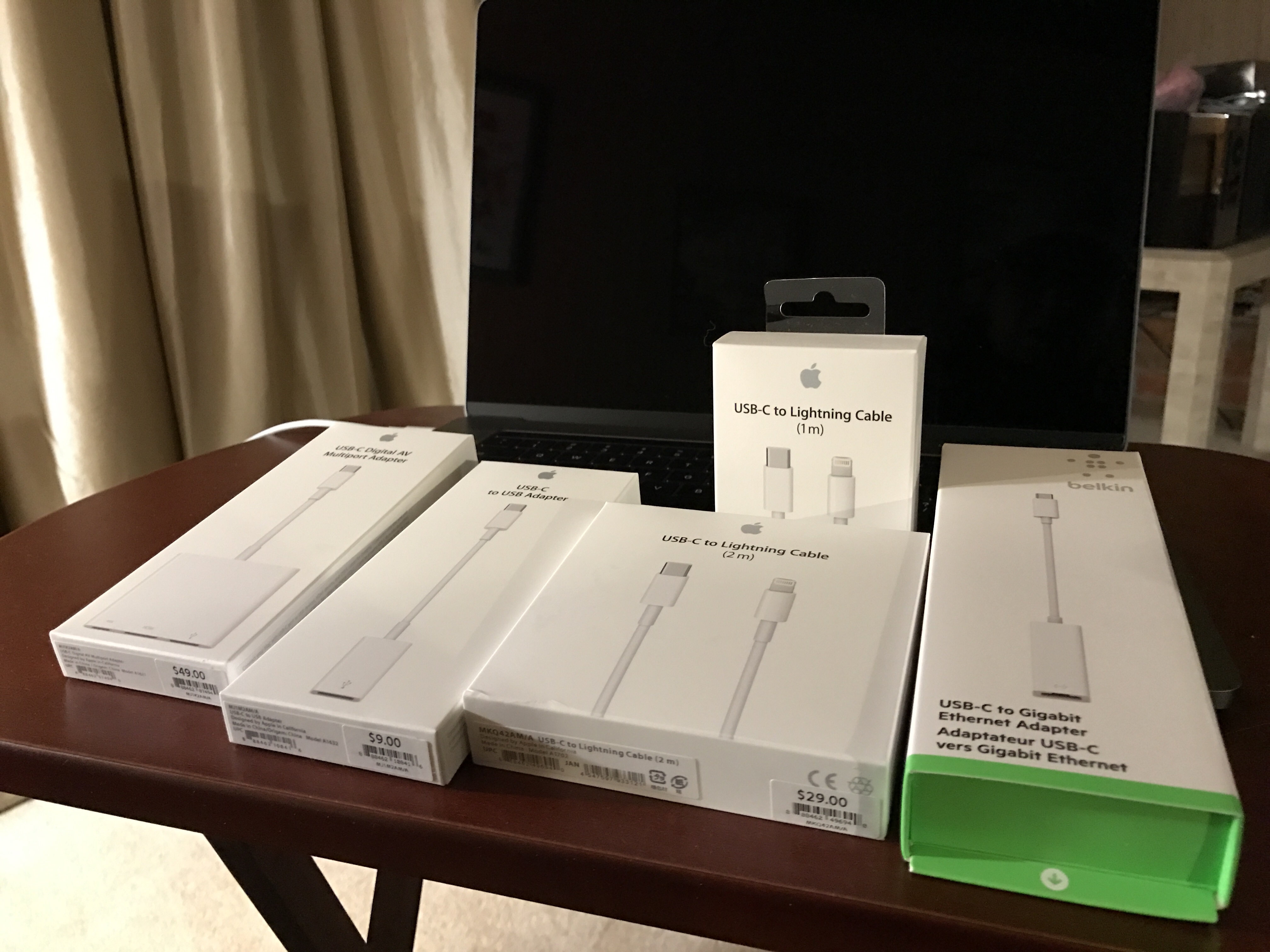 It isn't just the Mac. iPhone has more competition than ever before. iPhone is the largest segment of Apple's revenue, comprising 60% of total annual sales. Sales growth came to a halt in 2016. Another design misstep was the decision to remove the headphone jack in the phone to allow for higher waterproof certifications. No problem on the surface, but the company failed to realize that customers could no longer listen to music while charging their phones using the packed in lightning to headphone adapter. This kind of design oversight is troubling to long-time Apple users. At the iPhone Special Presentation last year, the company bragged about the courage it took to make such a bone-headed design choice.

Apple Inc. seems to be coasting on the legacy of Steve Jobs. This was extremely apparent when they released a book to pat themselves on the back about their insanely great product design. Designed by Apple in California starts at $199 and contains impressive pictures of great Apple products from throughout their history. There is nothing wrong with this book, but it is hard not to look at the company as arrogant when they make two seemingly bad design choices in 2016 and follow them up with a book about how great they are.

Some of Apple's products are still great and they offer an awesome user experience with continuity across their products, but there are better products available for less money in almost every case. This is a problem that can't be ignored any longer.

The Stock Market is Nearing a Meaningful High 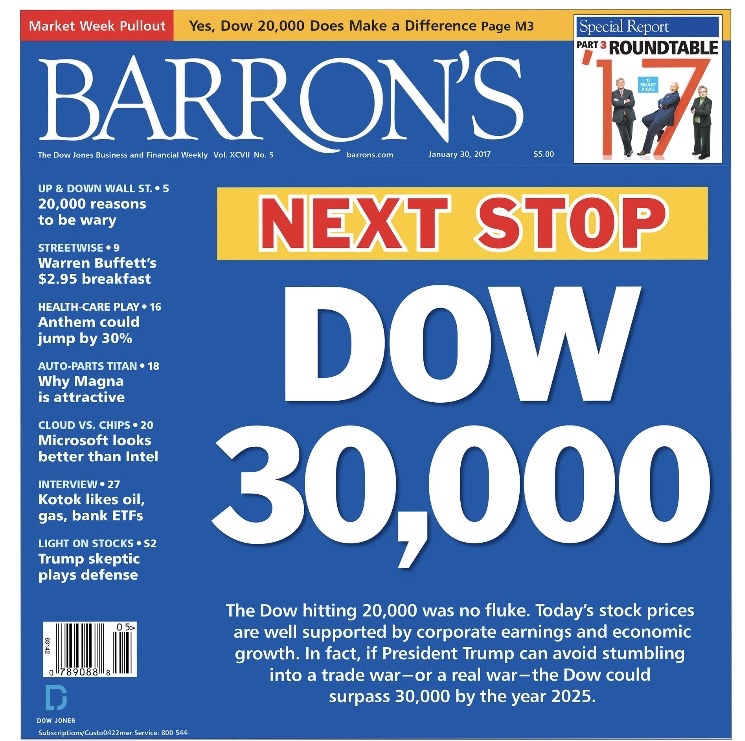 This cover of Barron's that ran over the weekend is reminiscent of past tops of the US stock market. The Dow Jones Industrials Average Index is up nearly 13,000 points (around 200%) from the lows of 2009. We are in the 8th year of the bull market that began in March of 2009. This is not the time to call for another 50% of upside, in my opinion.

Apple is one of the largest stocks in the Dow as well as the largest component of the S&P 500 and NASDAQ Composite indices. No matter how great of a company they are, the stock will be victim to market swings. Much of my decision to sell Apple comes from my strong belief that the US stock market is due for some pain. 50% of a stock's direction is governed by the broader market direction and I believe the business cycle is turning for the worse in the United States. 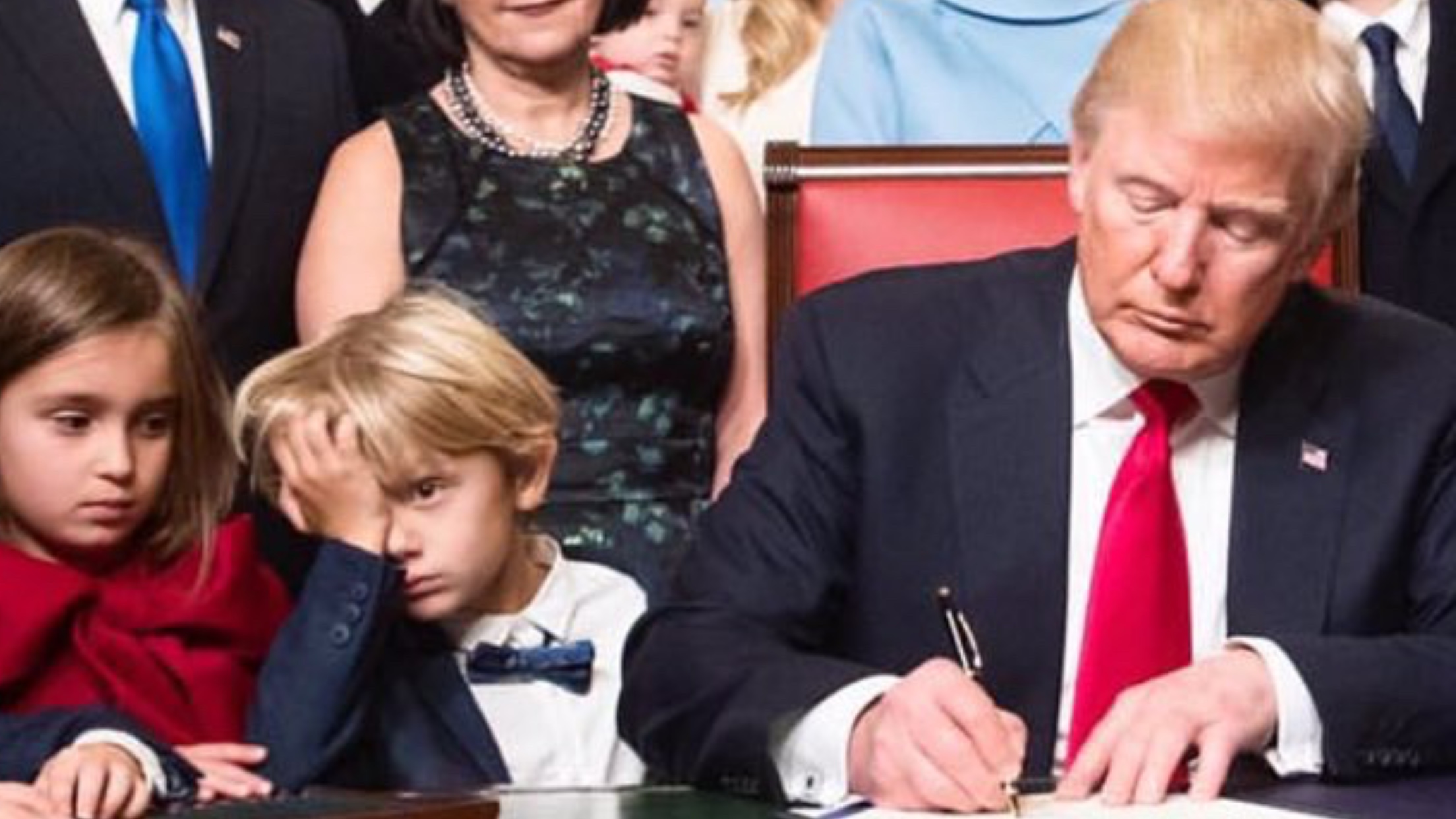 Adding to my concerns is the current administration at the helm of the US government. You have to have a lot of faith to believe that the policies of our current president are going to inspire confidence in markets. Volatility spiked today on the back of the panic and fear caused by President Trump's executive order banning Muslims from certain countries from coming into our country. The President has irresponsibly tweeted about companies and industries and has signaled a desire to create tariffs on foreign trade partners. It is not out of the realm of possibility for President Trump to engage with China in a trade war. Tariffs and taxes on Chinese-made goods would be a huge negative for Apple Inc. and a lot of other US multinational companies.  Nearly 60% of the S&P 500's revenues come from overseas, and an increasingly protectionist trade policy will not be a positive for the markets in the near term. To put it simply, the potential long-term upside to owning stocks is not that compelling when compared to the downside if things continue to worsen in the near term.

The Law of Large Numbers

Apple is a massive company. It is the largest publicly traded company in the world with a market capitalization over $600 billion. The company had $216 billion in sales last year, which is outstanding, but it creates a problem for them going forward. Apple Inc. experienced a decline in sales in 2016 for the first time in 13 years. This is understandable given the meteoric rises of both the iPod and iPhone product lines, but it highlights a huge risk. Let's say Apple can create another amazing product and it generates $20 billion in new sales. That would only give them top line revenue growth of around 10%. It is safe to say that the stock's best days are behind it, unless they can somehow gain market share in product categories that are rapidly being commoditized by other competitors.

What if I am Wrong?

I have been an Apple bull for my entire adult life. I identify as a product evangelist and I wrote this article on my MacBook Pro. I love Apple. I love its products. I love what it stands for. They are truly one of the most innovative tech companies in history and I have been on record as saying that I don't believe we have seen the last of Steve Jobs' inventions.

Right after I sold Apple's stock today, I turned around and bought $120 strike call options expiring in 2019. This is a strategy called "stock replacement." Basically for each 100 shares I sold for around $12,100 today, I bought 1 call option for $1600. This allows me to participate in the upside above where I sold the stock while risking way less capital. I pocketed around $105/share while still participating in the upside. If the stock closes above $136 per share in January of 2019, I will be in the money. If not, at least I didn't risk the other 87% of my previous position. If Apple has not shown any signs of growth by 2019, I won't want to be a shareholder anyway. If they do unveil something amazing and magical, at least I will get to participate in the upside with the same exposure as I had before liquidating my shares.

This was a difficult decision for me to make, but I believe it is a good time to decrease risk. I believe that Apple will still be a fine company for years to come, and maybe I will be able to buy shares back at a lower price when (or if) the stock market takes a turn lower. This was the prudent decision for someone who's wealth was tied to one company. I preach diversification and yet my portfolio was 90% Apple. I am relieved to have finally exited this position with a gain of 20,000% in 20 years and I kept 10 shares at a basis of 60 cents/share for sentimental value. I will forever be grateful to all of the people who have worked at Apple and all of the customers who keep supporting the company by buying their products. I look forward to this next chapter of my life with a feeling of freedom and relief.