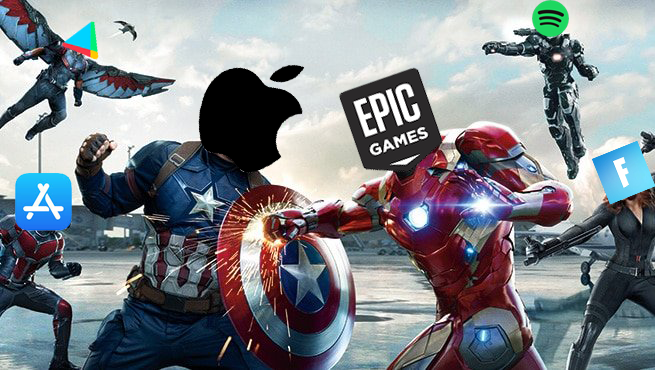 Apple (AAPL) stock down over 3% on App Store injunction

Apple Inc. is the largest company on Earth, and with that massive success has come regulatory scrutiny. Beyond Washington politicians, Epic Games has risen as one of the iPhone maker's largest foes over the past year. Apple was dealt a major setback today in their California court case against Epic Games over App Store payment processing policies. Judge Yvonne Gonzalez Rogers issued a permanent injunction against Apple that could limit the company going forward. Apple's stock is currently trading down more than 3% on the news.

Today's 3% drop in Apple's (AAPL) share price may not sound like a lot, but it has removed over $70 billion of market cap from the company. The issuance of a permanent injunction stating that the company must allow third-party payment services for in-app purchases caps off a bipolar week for Apple's stock, as the company hit an all-time high of $157.26/share when invites for the next special event were sent out on Tuesday. Apple employees also went public with their first #AppleToo blog post that detailed stories of sexual harassment, discrimination, and abuse at the technology giant.

Today's decision out of California was not all bad for company, as the court also threw out Epic Games' claim that Apple is a monopoly. Apple focused on this aspect of the result in their official response to the Epic vs Apple case. Epic Games CEO Tim Sweeney thanked everyone for their support, and did say that "we will fight on."

The majority of Apple's revenues still come from iPhone hardware sales, but the Services segment (which includes App Store sales) is currently the second largest sales driver. Many analysts on Wall Street have focused on the tremendous growth of Apple's Services revenue segment over the past few years as the company's Apple TV+ subscription, iCloud, and advertising services all showed impressive results in 2020. While today's news will likely lead to an appeal, investors and traders are acting first and dumping Apple's stock.

It isn't all puppy paws and kitten farts for Epic Games today. The court also ruled that Apple was within their rights in the company's decision to ban Epic's developer's account. That's definitely bad news for Fortnite fans who were hoping to play the game on iPhone again.