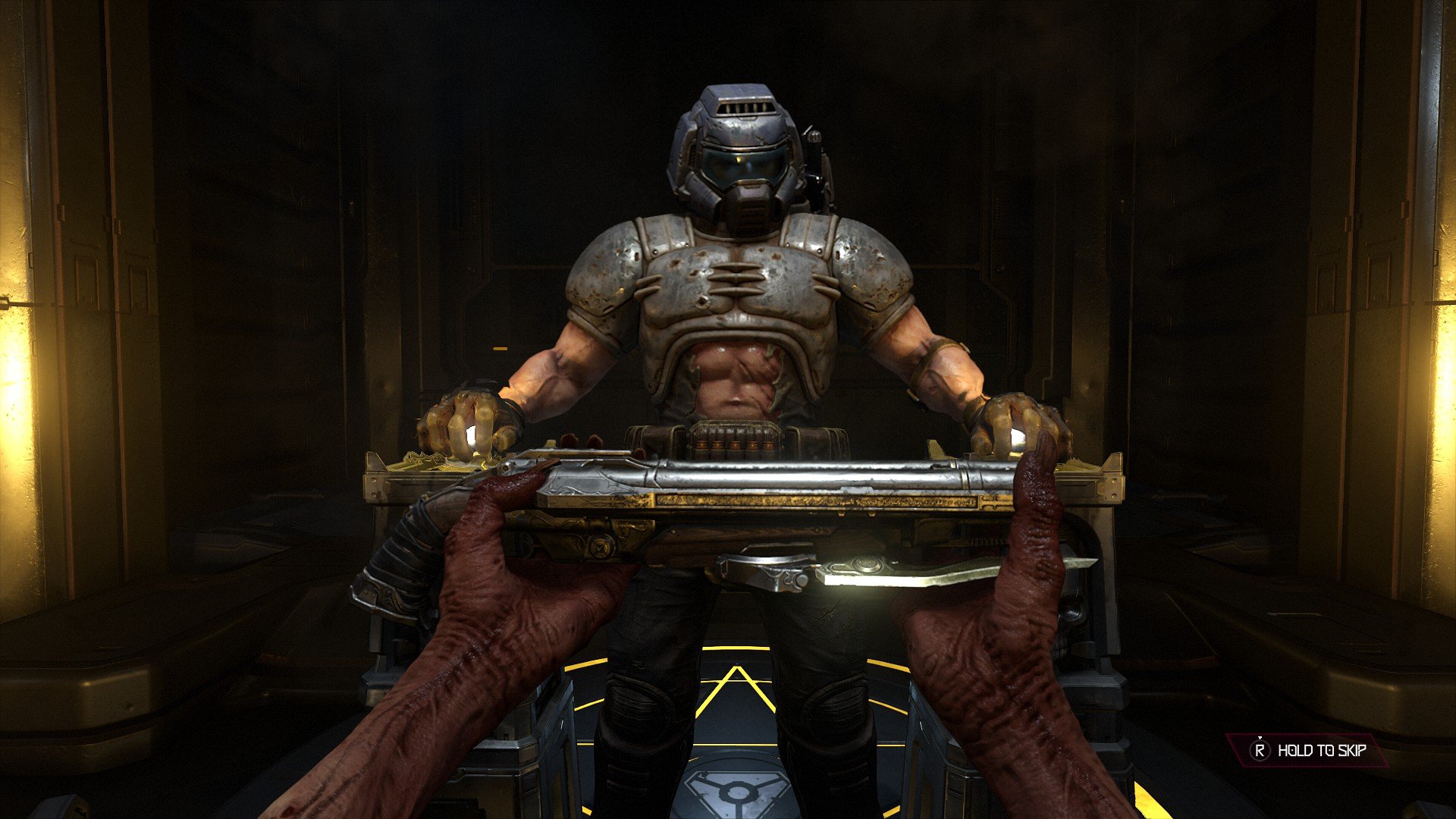 GAME DEVELOPERS LOVE THEIR JARGON. Systems, mechanics, AOE, interactables, shooter-looter, RNG. These and other terms fall within arguably the most important developer jargon of all: Game loop.

A game loop consists of a game's main flow--everything players do while playing. In Pac-Man's loop, players guide the hockey puck-shaped character through mazes as they gobble up pellets and avoid ghosts. In fighting games such as Street Fighter V and Super Smash Bros. Ultimate, players seek out opponents to deal damage and win rounds.

Doom's game loop is one of the most successful ever devised, and it owes that success to simplicity. Step one: Explore. Step two: Shoot. There are sub-steps (search for items while exploring; switch between weapons to exploit enemy weaknesses), but everything in the loop fits neatly into those two objectives.

Metaphors, another tool of the game dev's trade, extend organically from jargon. Martin is a vocal advocate for metaphors, and uses them to break down concepts to his team. In Doom 2016, the player-character, the Doom Slayer, was a race car. The game's levels were analogous to racetracks; a racetrack worked when a designer built it to allow players to "drive" as fast as possible.

The more Martin studied Doom 2016, however, the more flaws he perceived in both its fun zone and its metaphors. He agreed with Marty Stratton that the game's campaign did plateau roughly three-quarters through. But there was a bigger problem.

Most counters could be won by walking up to monsters--known as chess pieces--and blasting them in the face with the super shotgun, a fan-favorite weapon since its introduction in 1994's Doom 2. Once players realized that strategy was virtually foolproof, they could overuse ("spam") it to clear most of the game.

In other words, players blazed through racetracks by shifting into one gear and staying there. Why shift when one gear produced fantastic results?

"If one weapon is unbalanced, that takes away from everything else," Martin said. "You switch weapons because it feels good, but other people don't have to switch weapons as much."

As Martin saw it, id's job on Doom Eternal was to encourage players to see the merits of the game's more complex, more strategic systems.

"We don't want to force people to use every single weapon," Martin continued. "You can have your favorites. If you want to solve every problem with the double-barreled shotgun in Doom Eternal, you can do that. You just have to be clever about how you create openings."

"And how you manage your resources," added executive producer Marty Stratton.

Id's developers picked Doom 2016's arsenal apart to determine how to balance each one so it served a purpose even after players discovered more powerful weapons. Some critics pointed out that Doom 2016's rocket launcher took a backseat to the super shotgun and heavy assault rifle once players had kitted out those weapons. The super shotgun packed a slightly softer punch than the rocket launcher, but came with the advantage of not harming players when they stood too close to a rocket's explosion. The heavy assault rifle fired volleys of mini missiles--again, not as powerful as a single rocket, but effective enough.

Id's developers retooled the rocket launcher by steering into, rather than shying away from, its weaknesses. Rockets fire much more slowly than in the previous game, but deal more damage. There are fewer rockets scattered around levels, but each one counts for more in combat thanks to its greater damage-dealing potential.

"So, it's more useful, but it requires more thought," Martin summarized. "That's pretty much what the original Doom's rocket launcher was."

Id's designers balanced weapons throughout development. Their approach to the rocket launcher influenced every other weapon: Ammo would be scattered around combat arenas, but each weapon would hold considerably less than its counterpart in Doom 2016, compelling players to rely on the chainsaw's ammo-replenishing property.

As Martin and his designers tweaked weapons, they hit on something exciting. The more they balanced one weapon, the more useful the others became. "For example, with the balance we did to the rocket launcher, because rockets move slower, certain AI heavies can dodge rockets," Martin observed.

When an enemy displays a tendency to swat away--literally or figuratively--one weapon's attack, players can rest assured it's vulnerable to another, almost like a game of rock-paper-scissors. For instance, the ballista, the successor to Doom 2016's gauss cannon, fires heavy-duty energy blasts that hit almost instantly, similar to Quake's railgun. "So, for enemies that dodge projectiles, the ballista is a really good option for them," Martin continued. "But on enemies that move fast, I can use the mod for the rocket launcher that allows for remote detonation."

Players can still give the super shotgun preferential treatment in Doom Eternal. However, they have to earn the right to spam. "Many AI have now been tuned to no longer allow you to rush up to them," explained Martin. "You have to create openings to get up and use the double-barreled shotgun."

Doom Eternal's designers reworked the Mancubus, the heavyweight bruiser armed with a flamethrower on each arm, in tandem with the super shotty, and with good reason. The Mancubus was meant to be a threat in Doom 2016, but charging up to him and unloading both barrels in his face neutered him. In Doom Eternal, the Mancubus may pound the ground when players get up close, inflicting major damage. The message is clear: Don't invade the big guy's personal space.

Of course, players can still push the Mancubus around. They just have to figure out a way to get near him. Heavy weapons such as the rocket launcher and ballista stagger enemies, but there are better, custom-made options for knocking a heavy off-balance. Frag grenades instantly kill weaker enemies such as zombies and Imps, but automatically stagger heavies such as the Mancubus and Arachnotron, the plasma-shooting brain saddled in a cyborg spider body that returns from Doom 2.

The blood punch, another new mechanic, is the same melee attack used to perform Glory Kills. Punching an enemy charges players' blood-punch meter. Once it's full, throwing another punch detonates most smaller enemies, and staggers bruisers, leaving them vulnerable to follow-up attacks such as the super shotgun.

Weak spots and skill shots, two new and interconnected mechanics, tie into monster behavior and weapon balancing. Arachnotrons shoot plasma from a turret mounted behind them. Shoot the game, and it explodes with a satisfying plink. Without their primary method of attack, they skitter forward to slash at players with their claws. Targeting one of the Mancubus's flamethrowers causes it to explode, rendering it useless. On top of that, the explosion staggers the monster, so players can plan to target one and then rush forward to attack if they don't have time to aim carefully and take out the second cannon.

Some weak spots do more than knock a monster silly. Let a Pink Demon charge you, then sidestep using the new dash mechanic--or double-jump over its head--then spin around and shoot its tail, killing it instantly if the weapon used (say, the super shotty) is strong enough. Lob a frag grenade or one of the shotgun's sticky grenades at a Cacodemon, and the giant, floating head will swallow it with an audible gulp. An instant later it will begin to flash, inviting players to perform a Glory Kill.

Players might think a weak spot that instantly kills or neuters a monster might make Doom Eternal trivial. Quite the contrary: Exploiting weak spots is practically mandatory as players push deeper into the game and face larger mobs of enemies. So is prioritization.

Doom 2016 encouraged players to prioritize which enemies to kill first according to their weight class. The Baron of Hell was the largest non-boss monster, and one of the most dangerous chess pieces, so it should be removed as soon as possible. In Doom Eternal, players will need to calculate which monsters to kill first based on several factors: weak spots and the tools players have available to destroy them; the weapons players favor; special maneuvers such as Glory Kills, and the flame belch, a new mechanic that sets monsters aflame and causes armor shards to fall from their fiery bodies like leaves from trees in autumn.

One of the most dominant new chess pieces is the Archvile, yet another demon returning from Doom 2. Back in '94, the Archvile was a lanky, gold-skinned killer who darted around resurrecting enemies and roasting players with fiery explosions. In Doom Eternal, the Archvile is larger, and boasts abilities similar but not identical to its original incarnation.

"In Doom Eternal he doesn't resurrect enemies," Marty Stratton explained. "He has similar powers to what he had in Doom 2, but that aspect of it was something we didn't use. You make those decisions. We wanted to bring the Arch-vile forward by having him spawn demons instead of resurrecting dead ones."

Let an Archvile run free, and it will happily summon wave after wave of monsters to drain players of their resources. Killing it ASAP makes any battle that much easier to control using deeper strategies such as targeting weak spots.

Not that Archviles do the courtesy of going down easily. "We give Archviles a teleport, a shield wall--ways to defend themselves, and to make them hard to track, and the whole time they're spawning enemies," Martin said. "We add those risk-reward elements to chess pieces to make even better gameplay. If you're not prioritizing anything on the battlefield and just killing whatever's in front of you, that sucks. You know you've got an encounter dialed in right when the player is running by certain enemies to kill another one. That means we've done our job."

LIKE MOST VIDEO GAMES, PLAYERS SELECT a difficulty level at the outset of Doom Eternal. That difficulty affects monster behavior, damage, and other variables.

On higher settings, enemies will bring their A-game to every combat arena. To survive, players will be expected to make more decisions per second: exploit weak spots, prioritize the right enemies at the right time, master every weapon and its mods so they'll know the right tool for each job, leave weaker enemies such as zombies and Imps alive to restock supplies via Glory Kills, flame belches, or the chainsaw.

Whereas Doom 2016's difficulty ramped up over the first three to four levels, Doom Eternal throws more and more powerful enemies at players right out of the gate. Marty Stratton recommends players start on Hurt Me Plenty, the base difficulty, until they get a feel for new mechanics and how to combine them with old favorites. Doom fans who haven't played since 2016 will be able to refamiliarize themselves with what's returned and learn what's new, while mainstream players who have never played a Doom game before will feel challenged just enough to become invested in the game rather than turned off by it.

Soon enough, though, players will reach a point where no setting below Ultra-Violence or Nightmare, two of the toughest difficulties, will satisfy their need for more rewarding push-forward combat. That, Stratton believes, is a testament to the dev team's willingness to reconsider Doom's fun zone, and bring its chess pieces and race car back up to speed.

"As a developer, you hope to get to these moments where you have a team that is functioning so well because they now work together through a pretty challenging experience, working on Doom 2016," said Stratton. "Now, everybody knows their roles. Everybody makes decisions quicker. There's a level of trust and collaboration that gives you a freedom to push even harder. Every time we talk about how epic the game is, how massive the levels are, how refined the combat loop is--that's a direct reflection of the way the team functions, because we went through all that together."

The Path to Success