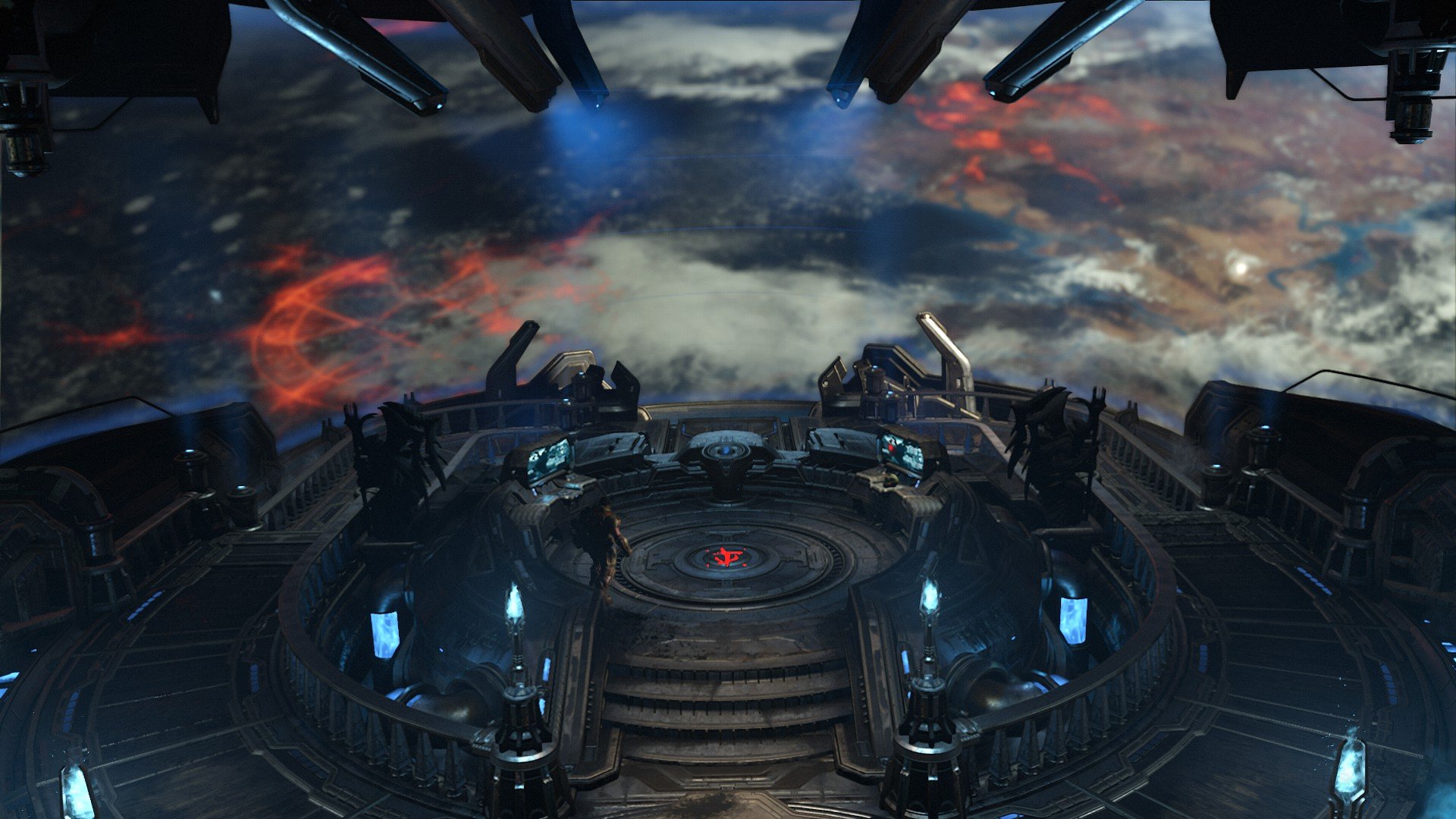 DOOM 2016 CAME TO MARKET mired in doubt. Perhaps setting the bar low made Doom 2016's exemplary combat and level design that much more exciting: All concerns evaporated once players got their hands on the game's campaign and sampled its expansive levels, worthwhile exploration, and thrilling push-forward combat.

The biggest surprise of all, however, was Doom 2016's story. It was good. Shockingly good. On a list of the top 100 innovations made by id Software in the FPS and gaming tech spaces, storytelling would have ranked somewhere in the 900s. Before Doom 3, id Software relegated narrative to one-paragraph blurbs in instruction manuals and over-the-top descriptions of victory at the end of Doom's and Quake's episodes. Even Doom 3 offloaded most of its storytelling to audio logs, emails, and the occasional cutscene.

Co-founder John Carmack famously compared storytelling in video games to pornography: Nice, but hardly essential. (He's since amended his stance, admitting that story-driven experiences are an exception to the rule that most games should prioritize gameplay first and narrative second.)

And that was fine. John Carmack, John Romero, and the other founding fathers of id knew that the real story of their games was the thrill of indulging in a fast and violent power fantasy. What more did anyone need?

Quite a bit, though players didn't realize it until they found themselves pausing to read Doom 2016's lore every time they stumbled across a codex entry, or deciphered one of the stone tablets, called Slayer Testaments, in the bowels of hell. Carmack would have appreciated Doom 2016's approach to narrative. Players who just want to rip and tear can ignore it, but those who want to dive deep into it have plenty to enjoy. They found themselves ruminating over questions the game posed. Was the Doom Slayer a new character? Was he the "Doomguy" from Doom and Doom 2?

The Doom Slayer was perhaps the most intriguing element of Doom 2016's story. When he awakened from death, a faceless entity exhorted him to Rip and tear… until it is done. Doom Slayer responded with aplomb. Demons, doors, computer terminals, drones--he kicked, punched, and destroyed everything he encountered. That habit infused one occasion with great significance.

Near the end of Doom 2016's story, Vega, the Doom Slayer's electronic assistant, needs to be destroyed in order to… something or other. The Doom Slayer doesn't care. Knowing his personality, one would assume he'd destroy Vega like he'd destroyed everything else, and get on with his work.

But he doesn't. He hesitates, then secretly pockets Vega's central processing unit. Neither he nor Dr. Samuel Hayden, a robot with the doctor's brain implanted within its chassis that guides players through the game, explains this. Hayden can't, because he appears ignorant of the Doom Slayer's choice. Maybe the Doom Slayer himself didn't expect to exercise self-control. Maybe it was his plan all along.

Players didn't know, and that added an unprecedented layer of anticipation to Doom Eternal's release. For the first time in the history of the Doom franchise, and likely in the history of id Software, fans wanted a sequel as much to continue its story as they did to revel in its whizbang graphics and polished shooting.

That was by design. "I think the Slayer Testaments is some of the coolest writing in games. To be able to read through them and put pieces together, figure out what it means in the grander scheme--that's the beginning of what we talk about as the Doom universe," explained Marty Stratton, executive producer. "Hugo leads creative on all that, and you can see it when he talks and in how he thinks."

Hugo Martin's development of the Doom universe started small. One of the goals of Doom 2016 was to give players a taste of a larger universe. As important as Doom Eternal's developers consider narrative now, however, it's one of the last pieces to slide into place.

"Narrative drove the mission design doc in the beginning, and it comes back at the end because we have to sew it into the level," said Martin, creative director at id.

Along with considerations such as the gameplay tools at players' disposal at the outset of a given mission, id's level designers need a frame of reference for the story beats they'll be working with: where the plot should be at the start of a mission; what players should learn along the way, ether through scripted events, cutscenes, or divulged from hidden collectibles; and where the plot should finish off at the end of the level, at which point that baton is handed off to the level designer in charge of the next area.

"And along the way, things change," Martin continued. "You have to be open to change, to do what's best for the game. Let the game tell you what it wants. A lot of ideas in mission design docs work out. Some don't. You just have to change them."

While the narrative's particulars fluctuate throughout development, the team's stance on character development does not. All characters, including the Doom Slayer and Samuel Hayden, at odds at the conclusion of Doom 2016, must exist in a gray area. Even demons have nuance. They're evil, of course, but they show emotion. In Doom 2016, hell mounted a resistance based on abject fear of the Doom Slayer. His return, and the inevitability of his storming a path of destruction through hell, was their worst nightmare. Perform a Glory Kill in Doom Eternal, and players will often see terror painted on the visages of demons before the Doom Slayer rips and tears.

The Union Aerospace Corporation (UAC), part of Doom lore since 1993, exists in that same gray area. Opening a portal to hell seems objectively wicked. The way earth harnesses Argent Energy through that portal is not so clear cut. Over the course of Doom 2016, Hayden asked the Doom Slayer to preserve cannisters of Argent Energy, a renewable resource derived from hell. The Doom Slayer responded by smashing them.

But why did Doom Slayer destroy such a powerful resource? Perhaps he believed hell should never be trusted. He never spoke a word, and he never needed to. Marty Stratton and Hugo Martin knew actions spoke louder than words, especially in a game like Doom. The Doom Slayer cared not a whit for Argent Energy, or Samuel Hayden, or earth, or even his past. Or maybe he cared deeply about those things.

Maybe there was more than one side to the story. There usually is.

Questions concerning Dr. Hayden arose during Doom 2016. "Samuel Hayden is an interesting character," Martin said. "On one hand, he's this evil, greedy, corporate leader. But really, you can relate to his motivations. He's trying to provide the world with a reliable energy source, and he knows that shutting that down would be a massive problem. He's not incorrect. Is he a bad guy? I don't know."

Hayden's motivations can be considered a lens through which to view the Doom Slayer's actions. In the far-flung future of Doom, earth ran on Argent Energy the way it runs on electricity today. The abrupt loss of that energy source threw the planet into full-on crisis mode.

Destroying the planet's supply of Argent Energy may have been the right thing to do for the Doom Slayer, who refused to give quarter to hell. If hell wanted a thing, or produced it, he opposed it. Maybe he was in the right. Maybe he was wrong. Maybe he was a little of both.

"The Doom Slayer, the way he goes about doing things, is it the right way?" Martin asked. "It's entertaining, but he caused major problems on earth when he cut off its energy source."

Hell and Doom go together like Quake and rocket jumps. In Doom Eternal, heaven gets involved--or is forced to get involved--for the first time in the franchise's history. Like everyone else in the Doom universe, the forces of heaven are a far cry from the age-old iconography of angels fighting to uphold purity and righteousness and all things good.

"Doom Slayer also has a history," Stratton pointed out. "That's part of it: He's not new to this fight. He's seen this dynamic, this heaven-hell dynamic. He's been around, and is very single-minded in what he thinks the solution is."

Martin cited numerous sources of inspiration for Doom 2016, and not just in the medium of video games. The silhouettes of characters in Batman: The Animated Series; the expanded universe of Star Wars; the eye-popping colors and designs of comic books. For the Doom universe, he looked to more modern superhero stories such as Spider-Man: Into the Spider-Verse, the critically acclaimed and commercial blockbuster animated film that explored the lives of Spider-Men from throughout Marvel's multiverse.

In the film, heavyweight crime lord Kingpin hatches a plan to bring his family back from the dead. When Peter Parker's Spider-Man informs him it's destined to fail, Fisk snaps, and kills him.

Martin viewed the scene as far more complex than a supervillain killing a hero. Was Fisk in the wrong? Yes. But audiences still understood, and even sympathized with, his motivations. "He would stop at nothing to see his family again. Is he really a bad guy? I think that's how heaven will be represented in our game."

Martin and Stratton remained tight-lipped on specifics such as what role heaven would play in Doom Eternal. Players can make educated guesses, however. Doom Eternal takes place on an earth infested with demons, like Doom 2, which carried the subtitle Hell on Earth. The Archvile, Pain Elemental, and Arachnotron have returned from Doom 2. Could Doom Eternal share even more in common with Doom's first sequel than?

"Being able to expand that even further, and answer some of those questions that linger from Doom 2016 or even back to the original games, is super-exciting," Stratton said. "So is bringing in elements like heaven and hell. When you're engaged from a gameplay perspective while also getting background, and to see the gameplay reinforcing the narrative being told--it really enhances it all. Everything feels bigger and more worth your time."