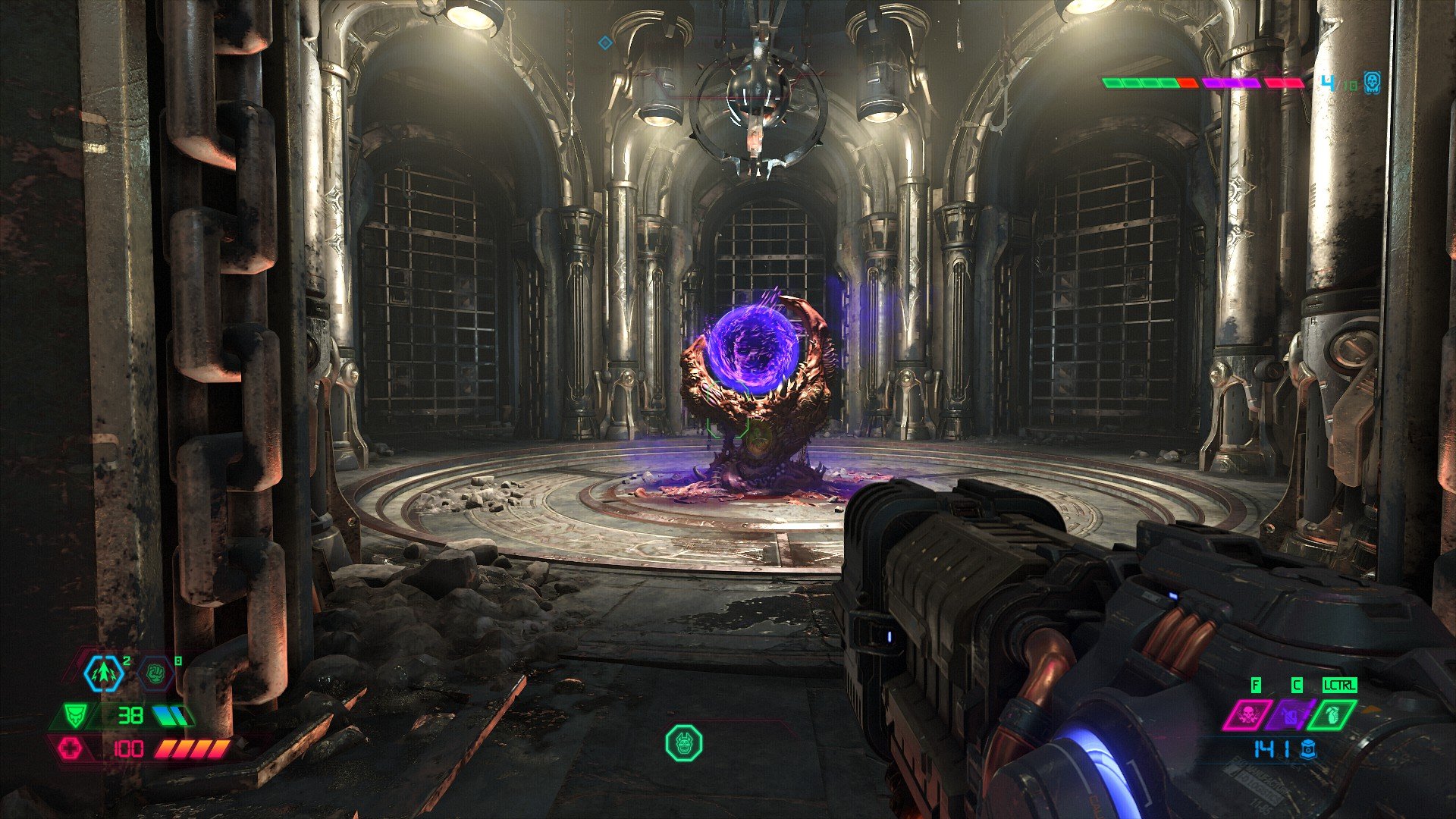 AS A MAN WHO SPENDS an alarming amount of his time in hell, Hugo Martin knows a thing or two about sinning. To Martin, no sin in game development is more damning than producing a boring video game.

Reviews of Doom 2016 that wrote off the gameplay as "boring" got under Martin's skin. His team's primary objective in reworking Doom Eternal was to engage players at every turn. Push-forward combat remains at the center of id's renovation. This time around, however, there's a right way to approach it.

"If the AI and weapons are balanced, and there is a right way to play it, there is a path to success," said Martin, Doom Eternal's creative director.

The right way to play Doom Eternal is the way Hugo played for the reveal at QuakeCon 2018. Switching weapons and modifications; meat-hooking over to enemies; firing up Flame Belch when players need armor; performing Glory Kills rather than hunting for med kits to regenerate health; prioritizing enemies in combat; learning and targeting their weak spots.

Using a phrase like the right way can be off-putting. Some players will want to use the super shotgun as their weapon of choice through the game, the same way they played Doom 2 in 1994. And they can; it just won't be as simple as sauntering up to a demon and pulling the trigger. Martin's right way is open-ended. Players don't have to use a certain weapon in a specific situation. They simply need to learn how to use all the tools at their disposal to set themselves up for success.

"There is a path to success, and it's a pretty simple one," he said. "Be aggressive, manage your resources, be mindful of the guns you use. Every time you die, you know what you did wrong; that motivates you to want to go back in and do things right. That's really what we're striving for: How did it feel when you died? Were you pissed because it felt like the game screwed you? Or did you screw up?"

Doom Eternal's pacing is a masterful balance of throwing players into the deep end, and teaching them how to extend their own lifelines. In the first level, they'll encounter mobs of Imps, zombies, Arachnotrons, and Cacodemons. On higher difficulties such as Ultra-Violence, those mobs pose a challenge. Players who learn the value of switching weapons early will find themselves moving in lockstep with the game's pacing, turning combat arenas into symphonies of violence with themselves as conductor.

At the start of the campaign, players possess the shotgun, Doom players' trusted sidekick. By the time they find the heavy cannon, a semi-automatic rifle, they've been using the shotgun long enough that they're eager to try something new. The heavy cannon complements the shotgun perfectly. Where the shotgun is slow but powerful, the cannon fires a stream of bullets perfect for cutting an escape path through a demon horde.

Soon or later, players will try switching between the heavy cannon and the shotgun. By this time, they've already acquired a feel for both guns. They are also likely to have encountered a weapon drone and acquired a mod for one of their weapons, such as the sticky grenade for auto-fire mode for the shotgun. Maybe they test out their mod by lobbing a sticky grenade into a crowd. A few monsters may survive the blast; to polish them off, players can switch to the heavy cannon, creating their own one-two punch.

Doom Eternal's designers purposefully tie pacing to content. Martin believes power fantasies in first-person shooters oscillate between extremes: absurdly difficult encounters, or yawn-inducing mild ones. When challenge ebbs, players should discover more content to keep them interested until the next encounter. When they discover new content, they must be given opportunities to test it.

"I'll kill thousands of guys in Destiny because I'm at the right level, but you'd better be giving me a constant drip of new guns because that's why I'm there," Martin explained. "Plus it's a different kind of difficulty. You have to put in so many hours to level yourself up to play certain sections of the game. Our studio doesn't make a hundred guns, a thousand guns. The content goes down, so the challenge has to go up."

To Martin, combat is another type of puzzle. Players must determine which weapons and modifications to use in an encounter. They also must take stock of the environment: where are the ammo packs? Are there weaker enemies shambling around that can be chainsawed when players need ammo right away? What about jump pads to reach higher ground? How far apart are ledges, walkways, and platforms? Is there a vantage point where players can snipe weak spots--say, with the heavy cannon's scope mod, giving them a sniper rifle-like view--to give themselves an advantage before they throw themselves into the fray?

Every encounter pushes players to go beyond their comfort zone and play the right way--with an assortment of weapons, ideally ones designed as the rock to an enemy's scissors. Snipe the Mancubus's arm cannons with the heavy cannon first, then wade up and unload both barrels of the super shotty.

Slayer Gates are the most explicit test in Doom Eternal. In most levels, players will come across a purple key that opens a purple gate somewhere on the map. Through the gate, they'll find beating hearts on pedestals modeled after Gore Nests in Doom 2016. Ripping out the heart transports them into a large-scale arena designed to be a notch or two higher in difficulty than any other encounters in their current level. Emerging victorious awards them with an artifact. Collect all the artifacts, and players can build the Unmaykr, a powerful laser reappearing in the franchise for the first time since Doom 64.

Overcoming a Slayer Gate is no easy task. Monsters, both individually and in mobs, tend to be a notch or two above the current level's usual fare in terms of numbers. If players survive, the game doesn't refill their armor, health, and ammo, potentially leaving them to limp back into a level still bursting with more combat arenas. But the Unmaykr is only one reward.

Slayer Gates are baptisms in fire. Players who attempt them will face Doom Eternal's most difficult challenges. That, Martin explained, is the point. Slayer Gates are designed to push players to their limit and force them to learn the ins and outs of every weapon, traversal mechanic, and power-up. Like defeating a boss in Dark Souls, finishing a Slayer Gate comes with a rush of pride and satisfaction in victory. Some players may be able to take down a Gate or two; they are optional, after all. Forcing players into them is a right way too far.

But Doom Eternal's loop, its fun zone, is constructed in such a way that most players will enter them to feast on the thrill of victory that comes from solving a puzzle, or cracking a code--or cracking monster skulls efficiently and intelligently.

That rush of satisfaction is a short-term gain. In the long term, every time players emerge victorious from a Slayer Gate, no matter how banged up and depleted, they will find themselves carrying what they learned about decimating enemies forward by performing better in subsequent fights.

"If we just hand you the power fantasy--'Just run down the hall and shoot everything; don't worry about it, because no one's going to touch you'--you're not going to feel powerful at all. You're going to feel like the monsters are weak, and you'll stop playing. A hero is only as strong as the adversary they have to overcome."