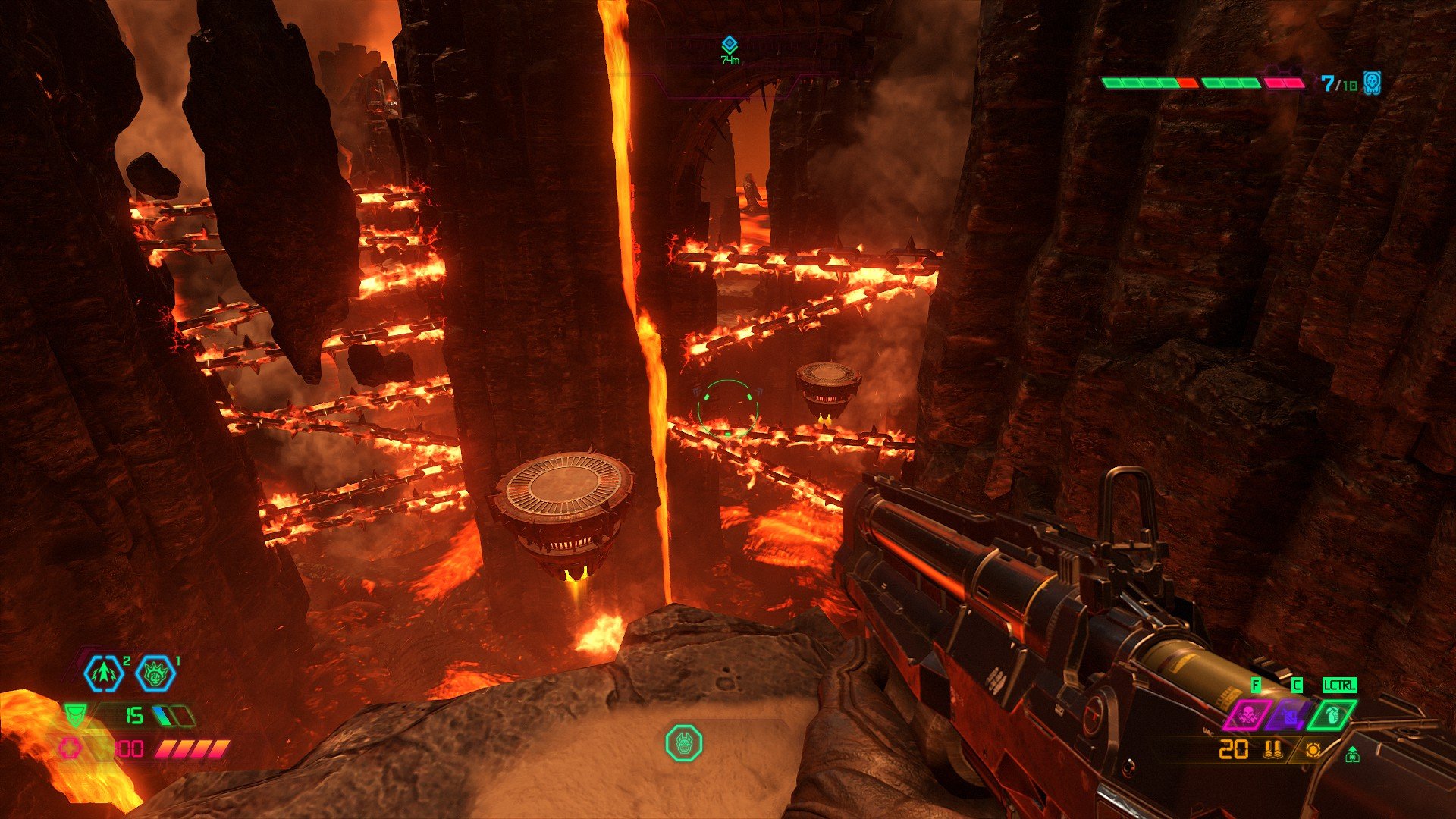 COMMUNICATION FLOWS THROUGH DOOM ETERNAL, connecting its many systems, monsters, weapons, and environments like a string through beads. Arguably no aspect of the sequel demanded precise, quick communication more than environments--the levels, or racetracks, through which players would rip and tear to satisfy the Doom Slayer's unquenchable blood lust.

Every level began development at id Software by posing and answering fundamental questions. What is this area? Why is the Doom Slayer there? Once they team arrived at answers, they brainstormed the overall thrust of the level, or mission, and codify it in a mission design document. Those documents were passed to level designers who collaborated with artists and game designers to make them real, while maintaining Doom Eternal's "contrivances of video game" approach.

Doom Eternal's mission design documents never spelled out every step players would take through an area. Although Hugo Martin is the game's director, he left plenty of room for his developers to do their thing. "We wouldn't want to deprive anybody of doing anything that will make the product better. One person can't come up with every idea. Mission design docs are a collaborative effort. It's cool to hand the baton to a designer. They take the doc, read it, and say, 'Oh, dude,' and they have a lot of ideas."

Doom Eternal's opening level is a prime example of id's design philosophy and process at work. Named "Hell on Earth" after Doom 2's subtitle, it opens with players in possession of the Doom Slayer, who's answered an SOS from earth. Hell has invaded. Time to go to work.

Doom 2's earth-themed levels looked as realistic as they could given the technology of the era. In Doom Eternal, earth is much more recognizable as our planet: skyscrapers, streets, retail stores, restaurants, subway stations. Unfortunately, the demons have done more damage than sports fans after their hometown team has lost (or won) The Big Game. Buildings are derelict and missing chunks of their exteriors. Roads have been smashed and pitted. Players must navigate through these environments, fighting demons and searching for secrets.

Indeed, levels in Doom Eternal are considerably larger than Doom 2016's. In just one level, players will explore several areas and complete numerous objectives. By the time they reach the end, they'll feel like they finished a separate story within the larger narrative.

"We try to emphasis the three-act structure," Martin elaborated. "See something cool in the beginning, something new in the middle, and something fantastic at the end. Players feel like they went on a journey."

Designers block out environments in graybox, a development term that means nondescript assets often colored gray, arranged into what will someday be a playable level. All that geometry--roads, buildings, caves, pits of slime, and any other real estate a mission design doc calls for--won't be colored in until later in the process, when artists have finalized their assets.

Level designers must consider what abilities players have at their disposal in the mission being created. "That means, what [monsters] we have available, what ambient AI we have available, puzzle mechanics--do I have double-jump yet?" Martin said.

This phase is perhaps where id's level designers (or LDs, as Martin referred to them) have the most fun. With art and game systems still in flux, graybox environments can be treated like Lego sets, moved and reconfigured until LDs arrive at an arrangement that works. Lego blocks can take forms besides geometry. Combat arenas, traversal puzzles such as climbable walls and monkey bars, hazards such as slime that prevents players from jumping and turrets that blast fireballs down hallways at different intervals, and interactables--components that can be shot, punched, or otherwise interacted with--are available to LDs as well.

Unlike Doom 2016, Doom Eternal's levels place a greater emphasis on combat in interstitial areas. Players will encounter enemies throughout levels, as in the classic games, rather than only in arenas. "I think we've really excelled at that in this game," Martin said. "The combat between arenas is awesome; it's as good as the arenas in my opinion, if not better. A fair amount of time was spent making sure that's really good."

Classic Doom relied on a mixture of combat and exploration to engage players. Combat was simple but addictive: find weapons, point them at demons, and pull triggers. Exploration took an even simpler form: run around hallways and mash the use/open button to find secret passages. Doom Eternal's environments spice up combat by placing enemies outside of arenas, and bring exploration up to snuff through a core set of puzzle mechanics.

Players will find three types of puzzle mechanics in each mission. Punching blocks with glowing runes slides them from one spot to another, so players can, for instance, punch a block across a room and climb atop it to reach a higher platform. Activators are items that respond to attacks, such as a lever that opens a gate for a limited team, challenging players to see what the activator triggers and think through how to navigate it. Finally, shootables are objects that players shoot to interact with, such as switches and explosive barrels.

"Doom comes down to two things: combat, and level design," said Martin. "Lore is a new thing, and our lore is awesome, but the game is really all about combat and level design. Levels should challenge me, and be just as engaging to solve, as combat. We had to give levels some tools to engage the player."

Doom Eternal's trifecta of puzzle mechanics give players more to do in levels than run and shoot. Yet no level, or part of a level, can be too complex. This is Doom, after all. Players should never have to slow down because they need to find a spade key to unlock the spade door, or solve brainteasers straight out of a point-and-click adventure. Punch a block, and it slides right to where it needs to be to climb atop it and progress. Fire a rocket at a wall, and delight as stone flies apart and clouds of dust billow forth.

Execution is simple, the result expected. But the mere act of these interactions engages players as they explore and fight. "As time goes on, the way you combine them together, and sprinkle in some combat and different things here and there--that's what makes moving through spaces in Doom Eternal far more entertaining than it was before."

In the spirit of embracing the contrivances of video games, Martin and his team bridged Doom and Super Mario's Mushroom Kingdom by introducing platforming mechanics beyond jumping and climbing. Players acquire the double-jump move earlier than in Doom 2016, and combine it with new techniques such as the dash, a midair lunge; monkey bar-like poles that let players swing forward; and walls covered in a rough material perfect for climbing. Each traversal mechanic is introduced one at a time so players have time to learn how it works apart from the others. As the game goes on, LDs combine them to challenge players' mastery over their navigational tools.

Every mechanic related to traversal went through numerous rounds of testing and polish. Wall-climbing worked poorly at first. The idea was that players should have to jump, or dash, or a combination of both to reach far-off walls. "Early in development you had to get it at just the right angle, and sometimes it would reject me," Martin recalled. "That felt like the game was screwing me, like, 'I hit the button at the right time, but it didn't work. What do you want me to do?' It wasn't balanced well enough, to be just user-friendly enough, to easily attach to walls."

At first blush, platforming may seem out of place in a Doom game. Martin asserted that or traversal puzzles, as the team referred to platforming, was just as fun, if not more so, than combat.

"They're skill-based traversal puzzles, so it's something that you master over time," he said. "We have straight puzzles, too, that aren't necessarily about skill; they're more about figuring them out. But the majority of our puzzles are skill-based, and that means the replayability of those is very high. It's kind of like a Tony Hawk game: what was hard the first time, you could pull off really fast the second and third time."

Still, traversal gave developers headaches throughout Doom Eternal's development. Shoddy wall-climbing plagued the game during its first year. Something about it, and dashing, and everything else, felt off. The solution, Martin explained, was to couch everything from puzzle mechanics to traversal systems, in aggression.

To find secrets, for example, players punch through walls rather than slide them up like a garage shutter. Indeed, the Doom Slayer rips, punches, and kicks his way through doors this time around. It's a small touch, but adds to the power fantasy of being the Doom Slayer, and infuses otherwise mundane actions with a shot of adrenaline.

Every mechanic went through rounds of testing and polish so that it exuded the right amount of aggression. The Meat Hook is a chain connected to a hook, much like Scorpion's spear in Mortal Kombat. Early in development, hooking onto an enemy dragged them to the Doom Slayer's position. That meant standing still while waiting for an enemy to slide over. Scorpion had the right of it: The empowerment MK fans experienced when their spear sank into an opponent's flesh and Scorpion bellowed "Get over here!" as he reeled them was undeniable.

It was also wrong for Doom Eternal's model of aggression. It would be better, some designers argued, for the Doom Slayer to pull himself over to the demons. That gives players another type of movement to utilize, as well as opportunities to decide what to do next. Unload with an assortment weapons, or pummel monsters with melee attacks for a Glory Kill, or perhaps double-jump and dash away.

Doom Eternal's team agreed that the Meat Hook should pull players over to enemies rather than vice versa. But another argument arose when some designers campaigned for players to latch on to any surface with the Meat Hook--not just monsters, but walls, ceilings, any geometry in sight. An opposing group pushed back, reasoning that that would oversimplify navigation. Why bother double-jumping or dashing when players could swing around like Simon Belmont from Super Castlevania IV?

"From a 'that sounds fun perspective,' yeah, we should work that in," said Marty Stratton of hooking onto architecture. "But the fact that the Meat Hook only latches on to demons and pulls you across the world, that narrowing of the item, makes it clearer in the player's mind how they can use it. There is nuance to it. Being able to get into a situation like this with our designers and our whole team, saying, 'We should be able to grapple everywhere,' and the answer being no, and having some people say, 'Okay. I don't agree, but let's make this awesome.' The fact that we can do that, and do it relatively quickly, it makes everything easier, and our decisions make the game tighter as a result."

"We have this saying," Martin added. "'Don't do more. Do better.' When you play through a level, it's been through years, in some cases, of iteration: change, balance, polish. It's fascinating and so rewarding to get to these moments where we get to the point where people can play a demo and you can explain the process. But it's a long process, getting there and reaching the point where it's consistent, polished, and fun."

"The last three levels of the game are like nothing you've ever seen before, and each is a completely unique environment," added Stratton. "It feels, more than anything we've ever made, like a really epic journey. I think fans are going to love that aspect of it."