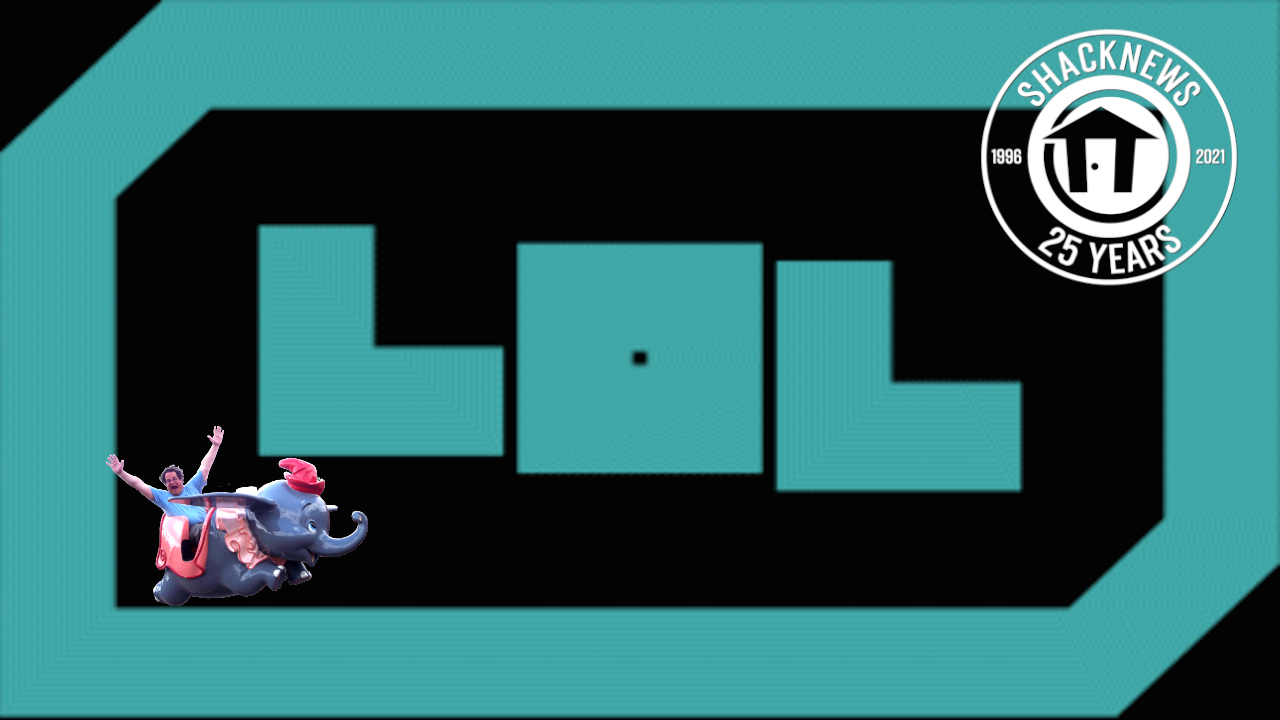 After 25 long years of remarks, repartees, and retorts, the Shacknews community has created some truly persistent memes and in-jokes that uniquely highlight some of the creativity and humor that has made the Shacknews Chatty a special place. It’s never been difficult to spot when a particular post or comment would be considered funny enough to bear repeating, as it would be reposted ad nauseum within days, sometimes hours. Some memes are too good for Shacknews to contain them and find themselves spread to the internet at large, to live in infamy forever. Most, however, stay within our community to burn brightly and fade away or linger on as stubborn puns. I’ll highlight some of the memes and inside jokes that remain favorites to generations of users spanning thousands of conversations.

I also can’t talk about being funny on Shacknews and ignore the elephant in the room, the Shack [lol] script. Now a sitewide feature taken for granted by users, the Shack [lol] script has been instrumental in changing the way we post and interact with humorous content on Shacknews Chatty. There’s a lot to look back on and with countless amusing moments, it’s impossible to cover them all. There are some that are so ridiculous, it’s hard to imagine them ever being taken seriously, but one Shacknews meme has been shared as real imagery so much outside of our influence, that it has taken on a life of its own.

The hands that keep on giving

When I started thinking about the most iconic and viral contribution Shacknews has given to the internet, Edgewise’s “Hands of God” image has to be the most omnipresent. According to my research, the Hands started to stretch around the internet in August 2004. This infamous image references one of the early internet’s less tasteful trends of shock websites designed to trick users into seeing grotesque real-life pictures. The most notorious of these being goatse.cx, Edgewise took a photo found online of a giant hole in the clouds and decided it would look better with giant hands ostensibly creating a massive orifice in the sky.

Edgewise claims the quick Paint Shop Pro clone tool job took no more than a few minutes and the quality of the mid ‘00s image manipulation shows. This didn’t stop people around the world from hastily radiating the Hands of God to other communities. Edgewise remembers seeing word of the picture being hosted on a Japanese imageboard the very next day after sharing it with Shacknews. The original posting was disastrously lost as part of the Shacknews Chatty database crash of 2004, but posts referencing Christian communities and their sharing of the doctored photo can be found in early September of that year.

The Hands of God was picked up by various fact-checking sites like Snopes, Urban Legends, and Hoax Slayer, but only Snopes would get the real scoop on its creation. Edgewise mentions in his post that Snopes updated its page on the Hands of God to include his message about his slapdash masterstroke soon after receiving his evidence of creating it for the Shacknews community. The reach of Edgewise’s Hands of God has only widened over the several years since it was just a joke on the Chatty. Posts about seeing it on meme pages still pop up and you can find people using it for quick laughs on Reddit as recently as the beginning of the year. Once given to the internet, an idea can never be taken back, and the Hands of God are proof that a good meme will never be lost.

The memes powered by Greasemonkey

Coming up with my favorite Shacknews Chatty posts, jokes, and memes throughout the last 25 years is a daunting task, even with my comparatively meager 16 years of posting. There are simply too many to remember at this point, but I wanted to touch on a couple that I’ll never forget. Around two years after porting the Shack [lol] script to the 2007 “New Shack” site-wide update, ThomW graced us with a couple of scripts that changed two particular users’ posts into webcomics, which were the style at the time.

Boring Gegtik’s penchant for posting the Qwantz.com Dinosaur Comics became a script that would turn all the user’s posts into the same panels on May 19th, 2009. Maybe this was in-part for his influence on the Shack [lol] script but that’s getting ahead of myself. Not even a month afterwards on June 10th, ThomW also posted a script that would turn one of Chatty's most prolific photog’s musings into a four-panel-style comic featuring some of his expressive selfies. I reached out to the man behind the camera, Sparkly, for his take on being turned into a Greasemonkey script and he replied:

That meme started with some self portraits I took in college for my graduation announcement. I think I posted them on Shacknews for people to get a laugh and I think it was ThomW that turned them into a Dino comic style meme. Every single reply to my posts after the sparkly script came out was “LOL sparkly comic” and I have to agree it was pretty hilarious. And then I learned that my emoticons changed the panels and I started to use it for the lols. I eventually got tired of it, those photos are so old and so dumb haha. Even to this day people still bring it up in replies to my posts. It’s amazing it has lasted so long! I don’t even know how to install it anymore.

The scripts can still be downloaded from Thom’s GitHub Greasemonkey project page today, but I couldn’t get them working with Firefox and the current version of Chatty to relive the late ‘00s Shacknews. Unfortunately for these Shack memes, they will only live on as references and memories, but you can still experience OverloadUT’s joke version of Mikecyb’s "Sparkly comic generator" that was another catalyst for ThomW’s scripts. With so many emergent moments of hilarity being generated by our community, the ability to easily tag posts became a key component in how Shackers interacted with each other and shared their humor.

The story behind the [lol]s

Once just another Greasemonkey script and now a vital part of Shacknews, the Shack [lol] script has made tagging posts a part of our everyday discourse and I couldn’t imagine Shacknews without it. I was honored to interview ThomW at length again, this time about his creation of the tagging system and his thoughts about its lasting influence on Shacknews Chatty posting. Thom Wetzel is a familiar and friendly face among veteran Shackers with numerous contributions to our community.

No contribution is perhaps as important, indelible, and influential for everyday Chatty usage than the Shack [lol] script. What started as a way for ThomW to make his own Shacknews experience a little less depressing by filtering out particularly dreadful discussions found new insight from a suggestion from the previously mentioned boring gegtik in early 2007. There is a source of contention to this claim, however, with esteemed Shacker and artist voodooraze proposing the idea in late 2006. Gegtik even replied in that same thread, so there is merit to the accusation. Perhaps this article and embedded interview will help bring this mystery to a close.

Despite the ambiguity surrounding the exact source of inspiration, the Shack [lol] script was embraced immediately by the community when it was updated and posted to the Chatty in mid 2007. Years before social media platforms like Facebook would add ‘reactions’ to increase the range of interactions with posts, Shacknews Chatty was paving the way with convenient tags for users to applaud or admonish messages in our community. Combined with the Shack [lol] webpage, Shackers could check out the funniest or most informative posts of the day or reminisce with some all-time priceless memories.

The Shack [lol] script is now a scrap of obsolete code since its inclusion into the feature set of Shacknews. Newer users might not realize the history behind those innocuous little acronyms that adorn the Chatty, but they have been fundamental in how users interact and share content. Mostly for the better, sometimes for more passive-aggressive uses, Shack [lol] tags have undeniably provided a way for users to preserve the posts they want to remember. That fact alone is a vital and instrumental tool for any online community.

The most difficult part of any project like this is excluding so many years of memorable mistakes, jokes, and stories. We all have our favorite memes and unforgettable posts that pop into our heads every now and then. I’ll always remember phrases like “I was my car” or “there’s no way a dog, even a pit could take me down.” It’s hard to forget them though with ex-staffer and current Valve employee, Chris Remo, crafting excellent parody songs to celebrate their incredulity. It’s these types of spontaneous interpretations of the absurd that help form a picture of the vast Shacknews culture formed from two and half decades of interaction.

Another long-running gag based in the nonsensical was the transformation of one user’s posts into a picture of a person wearing a horse mask, quickly dubbed “WTFHorse”. This was a way to jokingly protect others from the introspection of jcutner, at the time one of our younger members among an aging crowd. One could easily take offense to their messages being censored in such a crass manner, but jcutner was amiable and gracious throughout years of the association. I reached out to jcutner to talk about the topic and was met with the same friendly enthusiasm that came across in all of his posts as the WTFHorse. Time Zone differences kept us from successfully speaking directly, but I got the impression that it’s a fond memory.

The culture of Shacknews Chatty is one that can’t be defined with a single post or joke and it’s still changing to this day. As our community has matured, so have our tastes and senses of humor. There is a lot of legacy in the annals of the Chatty that might best be forgotten in this time, but it serves as a witness to our growth and ever-evolving exchange of ideas. Few online communities can boast of having such a storied and saturated past of community involvement. I’m proud to have been part of developing the culture of Shacknews Chatty and to have been there for the [lol]s. I can only hope for 25 more years of solid gold posts to provide a hearty laugh from time to time.