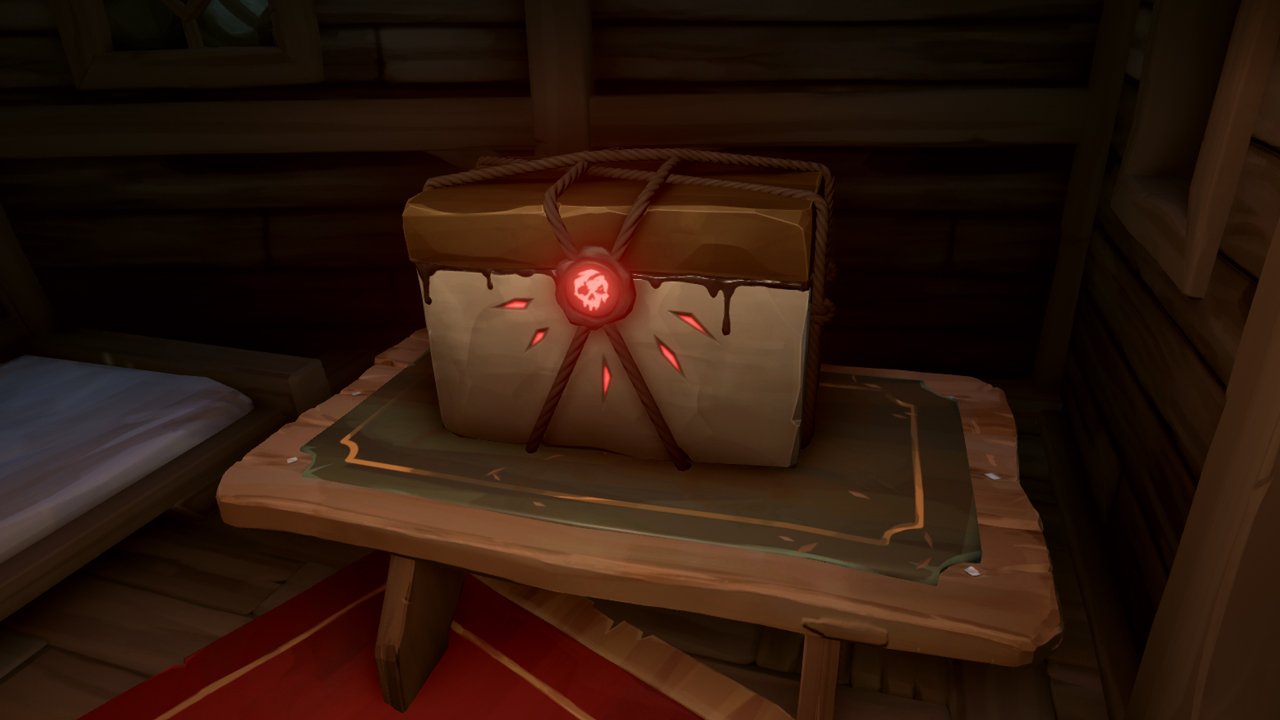 A Reaper’s Chest is a relatively new item in Sea of Thieves. This gray box with a black or gold lid is secured with a thick black rope, which is good because whatever’s inside is red and trying to seep out. One problem some players might encounter is knowing where to take a Reaper’s Chest (or Reaper’s Bounty). This becomes all the more problematic when you realize other players can see your location when you’ve got one aboard!

The Reaper’s Chests were added to Sea of Thieves only recently and have undergone a few changes. Originally, players were directed to take these to Duke in the Outpost taverns, but not anymore. If players want to sell a Reaper’s Chest now, they must take it to the Masked Stranger on The Reaper’s Hideout located at I12.

A Reaper’s Chest looks like a big block of stone. It has a gray container and a black lid, and it seeps red mist. On the front is a red skull, which looks like the red skulls on the map you might see from time to time. This is because the location of a Reaper’s Chest is marked on the map of all players on the server.

If you do manage to take a Reaper’s Chest to the Masked Stranger and sell it, you will receive 30 doubloons for your trouble. This is one of the best ways to get more doubloons in Sea of Thieves.

When you’re looking at the horizon, if you see colored fireworks, a Reaper’s Chest has spawned at that location. As the chest is picked up, the fireworks will disappear but the red skull will stay on the map.

And again, much like the other chest, the Reaper’s Bounty will be marked on all player’s maps with a red skull. As soon as you pick one up, expect to be attacked by other players or have people waiting for you at The Reaper’s Hideout.

Take a look at the horizon and if you see golden fireworks, set sail immediately! Below those fireworks is a Reaper’s Bounty. As soon as someone grabs the chest, the fireworks will disappear but the skull will stay on the map. Keep this in mind when on approach.

Reaper’s Chests and Reaper’s Bounty are some of the most valuable items in Sea of Thieves. Always expect a fight when you go hunting down one of these. Be sure to set sail to the Shacknews Sea of Thieves guide and walkthrough for more tips and tricks!

Where was the 'world premiere' voice over guy at E3 2021?
Login / Register