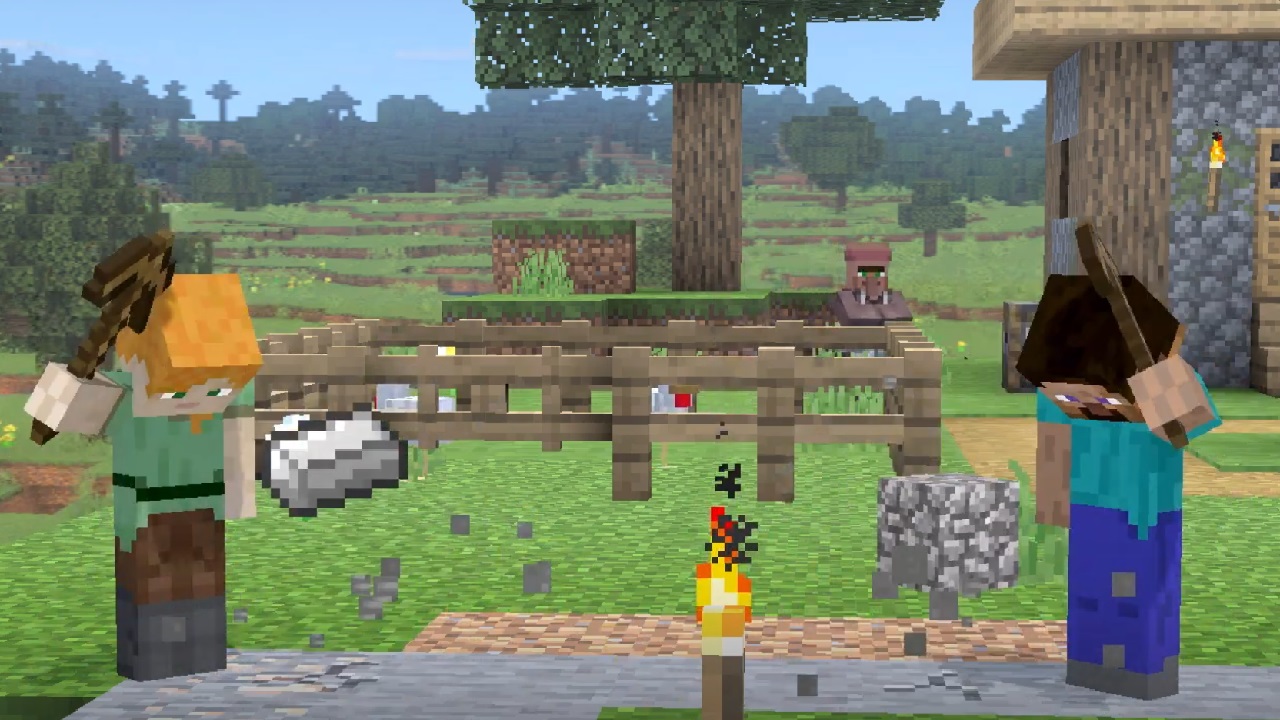 With the addition of Minecraft’s Steve and Alex to Super Smash Bros. Ultimate comes all of the fun and unique mechanics associated with them, translated to fighting game form! That’s includes one of the core elements of Minecraft, mining and crafting. During the recent Minecraft presentation, Director Masahiro Sakurai took us deep into the mechanics of Steve and Alex, showing off a bit of how their mining and crafting abilities work.

Playing as Steve, Alex, Zombie, or Enderman in Super Smash Bros. Ultimate, players will be able to mine by using their Neutral Special. The characters will pull out their pickaxe and start mining the ground. Wood, stone, sand, iron, gold, red stone, and diamond can be farmed and the ratio of any of them will depend on where you use the Mine ability in the stage, with iron, gold, red stone, and diamond being special resources that will appear at certain intervals. The materials you can carry will be limited and can be used to craft blocks via a jumping Neutral Special or create weapons at the Crafting Station. Rather interesting is that Sakurai mentioned the team reworked every single Smash Bros. Ultimate stage to take the Crafting ability into account. Sounds like a lot of work.

It’s worth noting that Omega and Battlefield forms of stages will be different in that they’ll all offer the same type of mining ratios regardless of the actual material of the stage. That’s because Sakurai and the team wanted to add some semblance of fairness and standard quality to Steve and Alex when it comes to competitive scenarios. It would, after all, be frustrating if you were on a stage where Iron was in short supply and difficult to get. The Omega and Battlefield stages ensure that Steve/Alex/Zombie/Enderman will always have a supply of all of the resources available to them.

The other end of the Minecraft equation for Steve and Alex in Super Smash Bros. Ultimate is crafting. You got some materials. You’ll want to use them. This can be done in variety of ways. For each character, a crafting station exists somewhere in the stage and can be used when you have the materials to craft Steve/Alex/Zombie/Enderman’s gear. You can also summon the crafting station to you by pressing down and shield at the same time. You’ll start with wooden tools (you always have a sword, pickaxe, and shovel), and if you use the crafting station, these tools will be upgraded to the highest quality resource you have, including categories of Wood, Stone, Iron, Gold, and Diamond, with wood weapons obviously being weakest and Diamond being strongest. Interestingly enough, Gold actually has the quality of being weak and fragile, but you’ll swing quite a bit faster with it, making it an opportunistic tool to consider.

Tools aren’t the only thing you can craft. Mining materials also offers blocks of various form, ranging from wood, sand, stone, and iron. When you jump, you can use Neutral Special to place a block that will shortly disintegrate after being placed. The block placed depends on the materials you collected and stronger materials like iron will disintegrate faster than weaker materials like sand and wood. You can use these blocks to avoid your opponents, block their projectiles, or even edge guard them. Enemy trying to recover? A crafty Steve could quickly build a small wall of blocks right off the edge of the stage to keep them from making it back to the platform.

Ultimately, it looks like Sakurai and his team got Minecraft’s core mechanics done with an impressive level of detail in Super Smash Bros. Ultimate. Outside of what we explained above, you can use materials for a number of Steve and Alex’s other moves, like TNT or minecarts and tracks. Be sure to check out our look at everything we know about Minecraft’s Steve and Alex in Smash Bros Ultimate for details on their moves and more, and get ready for them when they release this October.