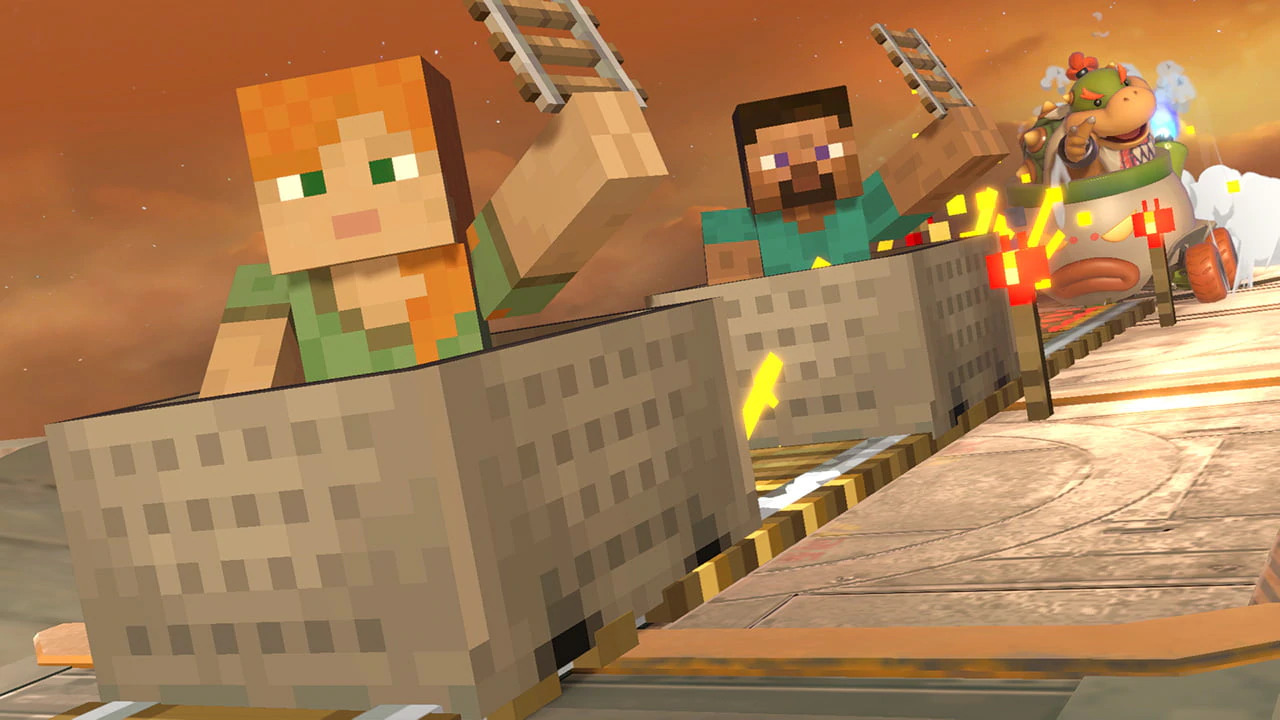 Nintendo and Super Smash Bros. series lead Masahiro Sakurai shocked the gaming world on Thursday when they revealed the next Super Smash Bros. Ultimate DLC character. It's Steve from Minecraft. It's also Alex, Zombie, and Enderman from Minecraft. There have been a lot of questions (questions besides "Why?") that have surfaced since that initial reveal and Sakurai looked to answer them during Saturday morning's Mr. Sakurai Presents 45-minute showcase. Shacknews watched the whole thing and here's everything we learned about Steve and Alex.

To add to the sense that the Minecraft characters had been in the works for a while, Sakurai began his presentation by noting that it was recorded in mid-August. He does note that Steve and Alex may look different at final release, citing continuing development.

Steve and Alex retain their movements from Minecraft, including the manner in which they look up and down. They have a lower jump than most characters, unable to even reach the lowest Battlefield platform. The characters will need to use their blocks to help them reach greater heights.

What are Steve's moves? Sakurai revealed those, too. He attacks with his sword, which he can use to hit his opponent repeatedly. He doesn't have a long reach, but if he manages to get to you, he can chain together hits or whack his opponent with a smash attack. He can also use his axe, which attacks slightly slower, but can juggle opponents. The pickaxe can be used to mine for items, but also makes for a good dash attack and also has a meteor attack. The Craft function can strengthen each weapon all the way up to Diamond. Weapons will break after extended use, so be careful.

Steve's down tilt will create flint and steel to ignite his opponents. It can also be used to block projectiles and edge guard. The up smash is magma block, which can be used to break opponent falls the hard way or act as a finisher for a juggling axe combo. The down smash attack is the lava bucket, which can send opponents flying. Steve's down-air is the anvil, which can act similar to Kirby's Stone attack and send players flying. Steve's grab is the fishing rod, which can not only lure in opponents, but can also fence them in briefly.

As for special moves, here's what those look like:

The Minecraft World stage brings together six biomes and will be determined at random. In the Plains biome, onsters will come out at sunset, so watch out for skeletons and zombies. At dawn, the monsters all burn up and the villagers come back. The Birch Forest is filled with trees and platforms, all of which are destructible. The Savanna has its own trees and platforms. The Taiga biome places trees in a different location, while also adding mossy stones. The Snowy Tundra is filled with snow and has an igloo in the center. Finally, the Stone Shore biome has a stone structure along the center of the map that players can either climb or destroy. The Minecraft World stage has a day/night cycle across all biomes and retains this element in its Omega and Battlefield variants.

The special Minecraft Spirit Board will feature a number of Minecraft-themed spirits, including Zombie, Creeper, Skeleton, Enderman, Villager & Iron Golem, Ghast, and Piglin. A Steve route is also available in Classic Mode.

While Super Smash Bros. celebrates original songs from gaming soundtracks, all of the Minecraft tracks will either be remixes or pulled from spin-offs, like Minecraft Earth and Minecraft Dungeons. There will be seven tracks total.

New Amiibo are also on the way. The Banjo-Kazooie, Byleth, and Terry Bogard Amiibo were unveiled for the first time. They're set to release in 2021 will round out the Amiibo line for Super Smash Bros. Ultimate's Fighters Pass 1.

Finally, Steve and Alex's release date is much closer than players may think. They'll be available on October 13 for $5.99 USD or as part of the Fighters Pass Vol. 2.