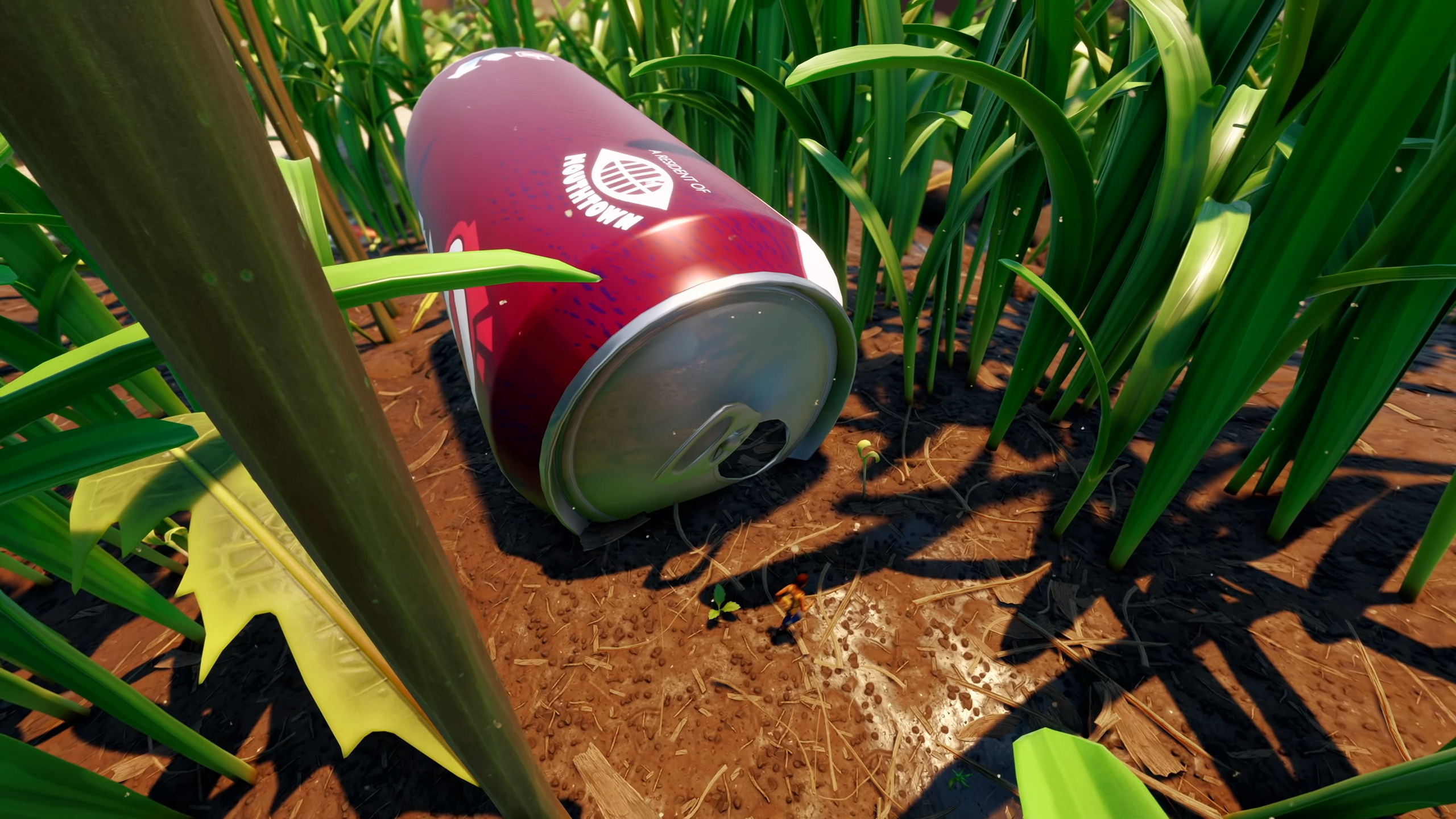 There are dozens of SCA.Bs tucked away in secret locations in Grounded. By finding all of these SCA.Bs, players can unlock special color schemes and themes for their own personal SCA.B. A few of these take a lot of effort to find, so be prepared for some exploring and building.

A SCA.B is a special wrist-mounted device that lets players manage gear, craft items, and check out the map. The color theme of the SCA.B can be customized via the OS section of the menu. This lets players choose a theme for the day time and the night time (the time of day will cause the SCA.B theme to change to the one you set). There are a lot of SCA.B schemes to find, and there’s sure to be one that is the perfect fit. Players also begin the game with four SCA.B schemes already unlocked:

Some content updates may change the exact location of a SCA.B and add new ones. New SCA.Bs are added to the top of the list.

The Syndrome SCA.B is found to the southwest of the yard, near the rake. There is a little hole below the rock the rake is resting on. This tunnel contains at least one wolf spider and an orb weaver. You can either fight through the tunnel or drop down the hole near the white stones. The SCA.B is in the little water catchment at the end of this cave, right before the bones.

For solo players, it may be easier to drop down using the hole in the white stones to the left of the cave. This will get them straight to the SCA.B without having to fight spiders. There's also a Raw Science here, perfect for purchasing some of BURG.L's wares.

The Miterider SCA.B is below the southwest laser and in the cave. Follow the power cable down the tunnel and go to the very end. The SCA.B will on the ground near a wall with slime mold on it (there may be raw science here, too).

The Hot Dog Horror SCA.B is north of the oak tree, in the Calvo Can that’s in the water. Jump into the can and go up the back, the SCA.B is underwater.

The Panfish SCA.B is north of the oak tree, on a branch in the water. Swim up to the branch and climb it. The SCA.B is just sitting on top.

The Punch-O SCA.B scheme is on top of the Tropicop Punch-O juice box, to the northeast of the mysterious machine. Build up to it by making some stairs (or a roof) near the lowest side. The SCA.B is at the top of the container, on the little fold. You may be able to climb up using nearby grass.

The Gunmetal SCA.B schematic is found in an underwater cave in the east of the map, past the eastern-most laser. The entrance to the cave is found by a spade, in a gully – there is also a leaf covering the valley. Go down into the cave to find a field station. A nearby tunnel will lead down to some water. Swim through the water to find another underwater station. The SCA.B is next to a computer monitor at the back

The Neomauve SCA.B is found in the anthill in the west of the map. This anthill is northwest of the baseball at the start of the game or found by following the rake’s handle in a straight line.

Enter the anthill and always go left, keeping your character along the left wall. This will ensure you take every single left tunnel. You will come across some water, swim through the water and go up the tunnel to find a cavern with some soldier ants (there is also a hole in the floor). Choose the left path, it will wind downwards to a quartzite rock, the SCA.B is on the ground. The anthill also contains the bee armor and a BURG.L chip.

The Bugged SCA.B is in the abandoned anthill near the oak lab. Enter the anthill and stick to the right-hand side. You will enter a small dead-end room with a high ledge that you can’t reach. The SCA.B is to the left of the room. Oddly enough, this SCA.B is actually bugged, and appears as SCA.B LCD in the OS screen. Make sure to wear ant armor so the soldier ants don’t attack you.

The Greystone SCA.B is on top of the north laser. This one is extremely difficult to reach, as it requires you to build from the ground up. Use the roof building item as it requires the least amount of resources (1x Weed Stem and 4x Clover Leaf). Build up to the first circular metal platform. The SCA.B is on a bolt on the north side.

Ther Hyperblaster SCA.B scheme is on top of the eastern laser. You will need to build up to the main platform by whatever means necessary (stairs, roof tiles, etc). When you get to the platform, use the copper wire to climb up higher. Jump up onto the panel and look in the groove to find the SCA.B.

The Sewage SCA.B is in the west of the yard, past the wooden logs near the water’s edge. Follow the rock wall until you reach the stone that’s leaning on an angle (there might be a wolf spider sleeping under it) then go south until you reach the water. Go into the water to find a sewage grate. Swim through it to come up into a cave, the SCA.B is right at the back near a skeleton.

This SCA.B is in between some flat pavers in the west, before you reach the picnic table. If you follow the northern stone wall along to the west, you will come across a stone that’s leaning up on an angle (there may be a wolf spider hiding beneath). Go through (or over) this stone and then turn south and walk between the stones. The SCA.B is on a little sprig.

The Sad Stab SCA.B is found to the west of the yard under an audio cassette tape. This is near a stone wall before the picnic table.

The Girthscape SCA.B is in a cave under the Yoked Girth Head landmark. The SCA.B is on the left-hand side, a few paces into the cave.

The Chubbs Series SCA.B is in the eastern side of the yard, northeast of the branch, in an underwater cave. This cave leads to the four-leaf clover, which unlocks a mutation. To find the entrance, walk along the side of water and look for a dead leaf. Below the dead leaf is a well-hidden cave. You will need to swim through the tunnel to reach the other end of the cave without stopping, as you only have just enough breath. When you get to the other side, turn around and swim back to spot the SCA.B glowing in the tunnel.

The Flying-V SCA.B is in the south on top of the stone that the rake is leaning on.

The Lasercorp SCA.B is to the south, near the fallen paint bucket. Go around the back of the paint can so you’re between it and the deck. Look up to see the SCA.B floating in the air.

SCA.B v1.02 is to the south, near the wooden wall near the house. Go into the back corner to find it behind a mushroom.

The Cyberstrike SCA.B is on top of the electrical outlet near the berry bush to the north of the yard. Follow the cable down to the ground, then climb up it too the outlet. Jump from the cable onto the angled flap, then walk up to the top. The SCA.B is at the back.

The Supreme SCA.B is found on top of the Frisbee in the hedge. There’s no simple way to reach this, you can either build up from below or explore the hedge thoroughly. Basically, you will want to climb through the hedge, keeping to the right (not going toward the bird bath). There is a spider boss fight on the Flingman Flying Disc, so prepare for a fight or just do a snatch and run.

SCA.B v2.11 is in a little lookout station in the hedge. This is up high in the branches, past the bird bath and the habitat. You can either build up to it or work your way through the branches. Basically, the station is looking out over the garden, so you will need to climb along the edge of the bush.

Another way to reach it is to start on the ground near the tubular habitat – you may need to build up to this higher area of the hedge underbrush. There are fungal growths on the tree that you can climb, and then you can sprint-jump onto the habitat. From here, it might be easier to reach the outlook station.

There are a ton of SCA.B schemes to find in Grounded. Each one can be used to change the color theme of your own SCA.B under the OS settings. Make sure you check out the Shacknews Grounded page for more helpful guides.