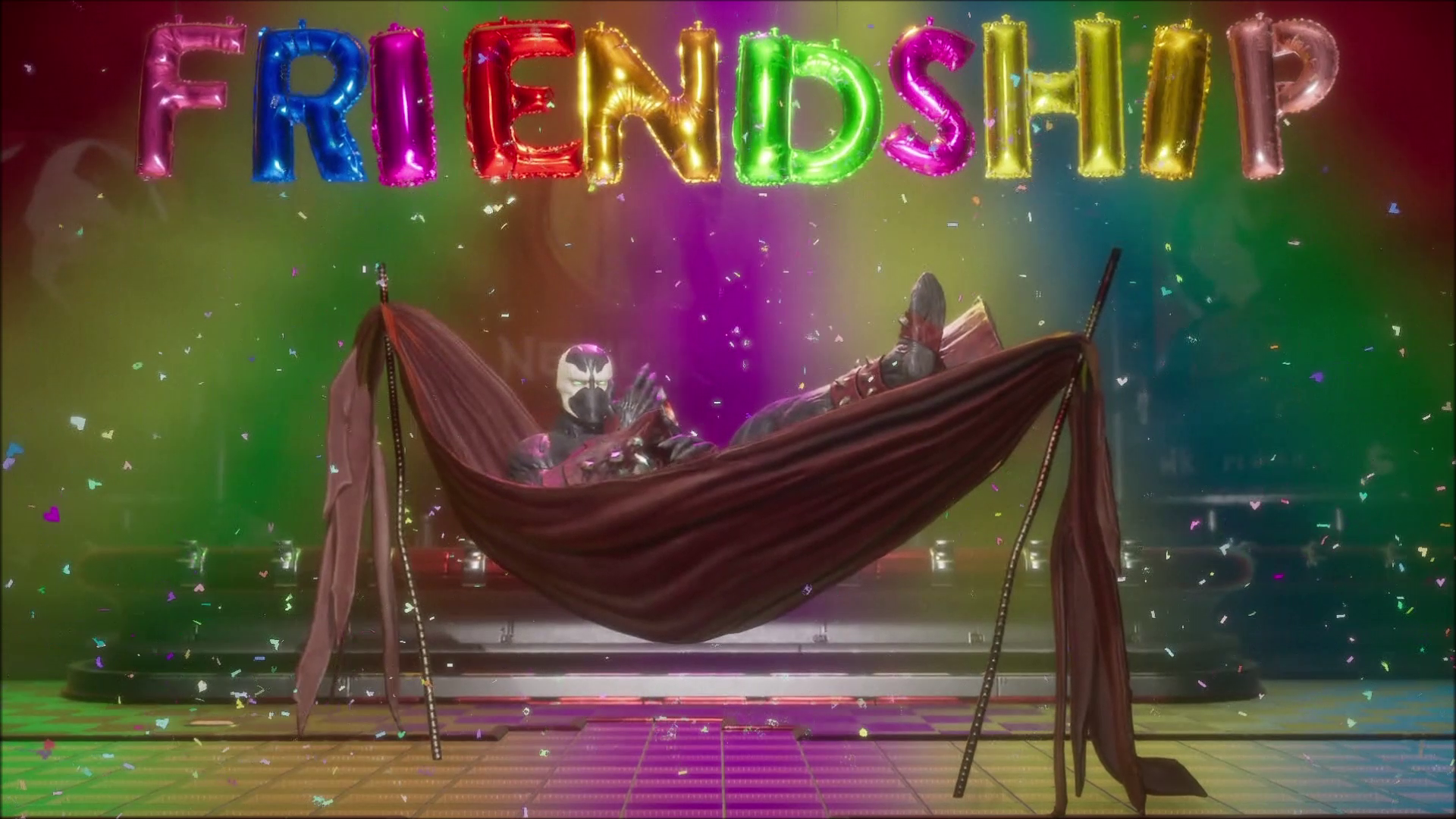 There's been a lot of talk about Mortal Kombat 11 today. That's because NetherRealm has released its big Aftermath expansion, but beyond that, they've also released a massive free update for the base game. That update features the long-awaited return of Friendships, giving players a new family-friendly alternative way to finish off their opponents.

Many of these Friendships have proven to be creative and inventive, playing on character traits and personalities. And of course, some of them are better than others. So Shacknews is taking today to list the 10 best ones. But if you want to look at all of the Friendships and judge for yourself, check out the video below.

So I'm starting this off by cheating right off the bat. The more musical Friendships are the ones that truly stand out and I ultimately had a hard time deciding between Kabal and Sheeva, so I picked both. First off, here's Kabal playing the xylophone at super warp speed. The xylophone is just a fun instrument. It's the music you hear when skeletons are dancing!

I'm also a sucker for musical glasses, so this Sheeva Friendship hit all the right notes. Watch as she puts on a veritable symphony with all four of her Shokan hands.

Geras moving around at hyperspeed and building a sand castle out of the sands of time is just hilarious. It's especially fun because it plays so much against his stone-faced persona, yet he comes across as a total perfectionist. Everything has to be in just the right place.

And that's why the kicker to this Friendship lands it on this list. Watch at the end as he makes sure to plant that flag just right. Look at how pleased that man looks with himself! That's the expression of a guy who takes pride in his work.

Jade's so used to hitting opponents over the head with her staff. Naturally, it also makes for a great piñata-breaking stick. But the shower of candy isn't the only thing that puts Jade's Friendship on this list. It's Jade stopping to then eat the candy, topped off by the nonchalant candy toss. It's such a playful visual that it's hard not to sit there and laugh.

Nightwolf is aided in battle by the great animal spirits. But when the battle is over, it's play time. So for Nightwolf's Friendship, he has the great wolf spirit jump through a flaming hoop. That's good enough on its own, but even after Nightwolf is declared the winner, here comes the big bear spirit to balance on a giant beach ball and slowly roll across the screen. That's an awesome kicker and a strong exclamation point to a pretty good Friendship.

Mortal Kombat II players will always have a soft spot for Kidd Thunder. Raiden's Friendship was among the best of the original set, so it's exciting to see Kidd Thunder make a big comeback.

And what a comeback! Raiden and Kidd Thunder go with a neon aesthetic, running with some cool lighting effects (and lightning effects) to make this look like one of the slicker Friendships of the bunch.

Sonya's drones have served her well in battle, but they aren't all killing machines, as it turns out. Some of them just want to play. So here's Sonya playing fetch with one her little robots. But it doesn't bring back a stick, but rather a dead Tarkatan. Whoops!

So it doesn't quite have the hang of this fetch thing, but that's what makes this Friendship so much fun.

The best Friendships are the ones that either break character to an absurd degree or the ones that totally fit in with a fighter's personality. This is a case of the latter, as Fujin grabs a kite and uses his Wind God powers to give it a little boost.

Fujin skipping around like a little child makes this so much better. It's the picture of joy and whimsy. It's a total contrast to the Fujin that rips his opponents to shreds with the winds.

Every good actor needs a stuntman. Mortal Kombat 11 may not necessarily have Arnold Schwarzenegger, but it has his likeness and NetherRealm knows how to use it. So here's the T-800 hopping on his signature motorcycle and doing some neat tricks.

It's the silly visual of the T-800 riding back and forth across the screen and doing a variety of different poses that really makes this. All while sporting that laugh-inducing grin and giving a very human thumbs up. Not sure who put this in the T-800's protocol, but we love it.

Not everything needs to be overly complicated. Sometimes, the simplest ideas are the best ones. And does it get any easier than having Robocop do the robot?

But the law enforcement cyborg's sleek moves aren't the only thing that make this Friendship look like a million bucks. NetherRealm went the extra mile and added a VHS tracking effect to give this a vintage look right out of the 1980s where Robocop was first born. Plus, look at him sport that giant chain! That's outstanding attention to detail and the sort of effort that puts this Friendship above all the rest. All except...

Jax has been the picture of coolness through many of these Mortal Kombat games, most recently as a Carl Weathers stand-in back in Mortal Kombat X. But Jax has never looked cooler than he has here, playing some smooth jazz for his opponent and players at home. He even gets a snazzier rendition of the new Friendship jingle. I admit, I might have some bias here, because lord knows that as a Hearthstone player, I have a certain affinity for the Epic Sax Guy.

And like the Robocop Friendship, this gets a sweet-looking visual effect to go alongside it. There's so much detail here that I can't help but put this on top.

If you have any Friendships you'd like to recognize, join the conversation and let us know in the comments. Remember that you don't need the Aftermath DLC to play with Friendships, so be sure to read up on today's free update. We'll have more Aftermath coverage in the days ahead, so keep an eye on our Mortal Kombat 11 guide hub and FAQ for continuing coverage.