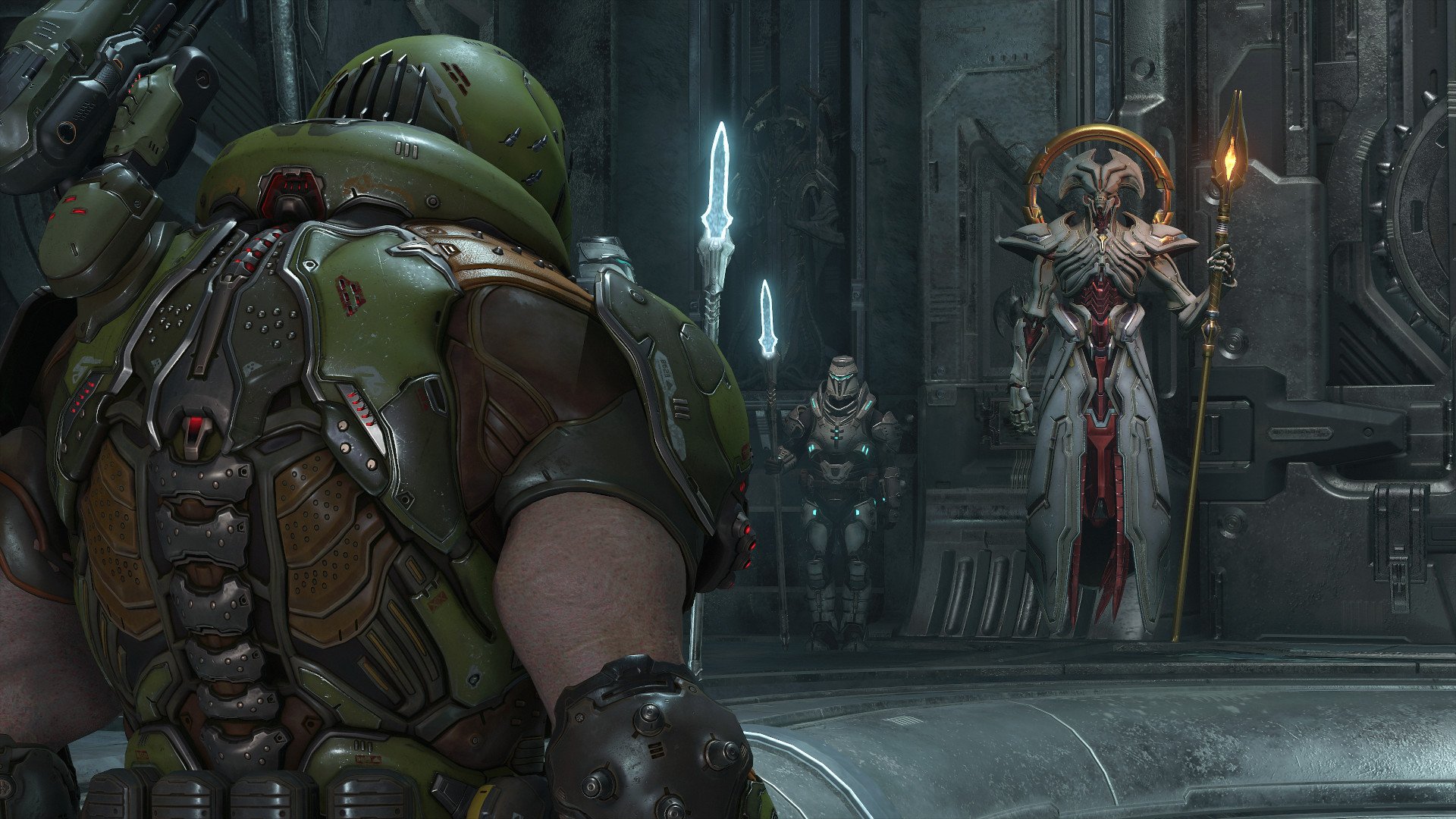 Doom Eternal review: One hell of a party

Doom Eternal is by far one of the most anticipated games of the year. Following id Software’s huge success with Doom 2016, many old and new fans alike are looking forward to diving into the Doom Slayer’s next chapter. There’s a lot to digest with the latest entry in the series – from new mechanics and weapons to the return of some iconic demon classes – and Doom Eternal is one hell of a good time.

Editors note: This review only covers the singleplayer campaign. We'll have an official piece on the Battlemode multiplayer soon.

Back in the saddle

Doom Eternal wastes no time thrusting players back into the action. The world is on fire – quite literally – and demons are piling in from Hell. The earth’s population is falling drastically and it’s clear that there is only one man who can stop it all from happening. Enter the Doom Slayer with a flourish of the series’ iconic heavy metal music. There’s no extended build-up here. No slow-motion entry point like we had in Doom 2016. Gone are the days of the pistol; Long live the Combat Shotgun.

This is one of the first big changes players will recognize between Doom 2016 and Doom Eternal. The infinite ammo pistol, which could come in handy during those dry spells when ammo was a bit tough to find, is gone. The Combat Shotgun is your basic weapon this time around, and you’ll find yourself coming back to it again and again throughout your playthrough.

Other weapons unlock at standard progression points, with the Assault Rifle, Plasma Rifle, and even the BFG-9000 joining your arsenal as you make your way through the campaign. As always, you’ll find yourself equipped with more than enough to take down the demons in your way. Unlike previous Doom games, which allowed you to pick and choose your weapons a bit more, ammo does get a bit scarce at times in Doom Eternal, forcing you to move through your weapon wheel in ways you might not have before. Enemies now feature defined weakspots, which when utilized can completely turn the tide of battle in your favor.

As someone who enjoys using the Combat Shotgun, and the explosive rounds that come with it, I often found myself having to move through the other weapons that I had available to me, as ammo can get pretty tough to find during intense fights. Still, the new platforming abilities, and the new dash mechanic made for a nice change of pace, giving you new avenues to get away from danger quickly if you found yourself struggling to stay alive.

And behold a pale horse

As far as FPS games go, Doom has one of the richest histories, with over 25 years across the series. Despite the success of Doom 2016, id Software needed to follow it up with something even bigger. To do this, new mechanics and even new enemies were added to the lineup to help freshen things up and throw some wrenches into the well-oiled cogs that made Doom 2016’s gameplay feel so good.

The game still feels great with the new mechanics. Platforming works out well for the most part and adds some nice touches to combat – allowing you to swoop away using well-placed bars around the various combat arenas. These new mechanics also open up new areas of exploration, allowing you to move up and through levels much more efficiently. Unfortunately, Doom Eternal falls into the very pitfalls that most linear shooters do, where players are forced to learn to play the game the way that the developers intended.

This isn’t a game that allows you to pick and choose where you want to go or how you want to approach situations. You are a murdering machine, armed to the teeth with weaponry, and you’re going to have to make use of it if you want to stay alive.

Platforming isn’t the only new device you have at your disposal, though. The Meat Hook – which is attached to the Super Shotty – allows you to grapple onto enemies, pulling you directly to them. This is handy during some fights, however I found it pretty useless the majority of the playthrough, as I was much more efficient at disposing demon hordes while moving around constantly. Of course, players more well-versed in the dance of Doom might find more use out of it in their own playthroughs.

The Flame Belch also adds a nice dynamic, allowing you to light enemies on fire as you battle around them. This creates little chunks of armor that fall off of them, allowing you to add some additional defense to your dance of death. I will admit that I wasn’t very good about making the most of this new device, but it did come in handy during tough fights with lots of enemies.

And his name that sat on him was Death

Doom Eternal does a really good job of building off of the god-like view that has come to surround the Doom Slayer throughout the series. In fact, as you explore the world, you’ll find various audio logs and broadcasts that seem to correlate with this thought – that the Doom Slayer is some holy avenger sent to protect humanity. It’s a novel idea that works well, and as you dive deeper into the narrative that id Software has woven here, it all really comes together.

I won’t spoil the exact nature of the narrative, as it’s something best experienced by Doom fans, but I was happy with the way that id Software brought everything between Doom Eternal and Doom 2016 together into a cohesive story. If you enjoyed digging deeper into the story behind the violence in the reboot of the series, then you’ll probably really enjoy the narrative direction that Eternal has taken.

What makes Doom so special for me, is the game’s ability to just make you feel like an absolute badass. While other games have tried to capture that same feeling, none have ever done it as well as id Software has with Doom. Unfortunately, there are a couple of points in Doom Eternal where this feeling is ripped from you. In fact, one of the later boss fights of the game takes away that feeling entirely, as you’re left to scrounge around the map for ammo drops, all while dealing with enemies that take multiple shots to kill. It’s a huge takeaway from the mainstay of the series, and it made the entire fight feel like a chore instead of a challenge.

Aside from that particular boss fight, though, the game does a very good job of making you feel like a force to be reckoned with. It’s a feeling that still feels great despite the 4 years that have passed since Doom 2016 revived the series.

Round and ‘round we go

It’s very clear playing through Doom Eternal that the developers have designed it to be replayed again and again. While the normal battle encounters won’t change, the way that the levels are designed opens up a load of exploration once you’ve become more accustomed to the different mechanics.

Slayer Gates and other secrets are littered throughout the world. These secrets include everything from Extra Lives to Cheat Codes that can be activated in Mission Select. There’s also the new Fast Travel function, which unlocks at the end of a level, allowing you to teleport back to key areas of the level to explore more. This all helps to encourage exploration and replaying of levels. If you were a fan of 2016's classic Doom levels, then you'll be disappointed to learn that I didn't come across any during my time with the game. They might be out there somewhere, but at the time of this writing I haven't come across any. All around, though, the exploration options in Doom Eternal are much greater than in 2016, with much larger levels and areas just waiting to be found.

Furthermore, the game has taken a heavy approach to challenges. Not only will you find the level-wide challenges for weapon points, but you’ll also find weekly challenges that all count towards an overall season experience level. It's unclear how the developers plan to extend the content beyond this first season, but it does at least leave a road for Doom Eternal to grow much larger after release. The game also features a slew of skins that you can unlock to change how the Doom Slayer looks in the singleplayer and multiplayer modes, so if you're someone who enjoys loads of visual variation, you'll find plenty on tap in Doom Eternal.

Not all Doom and gloom

While Doom Eternal does a good job of building off of 2016’s success, the game isn’t without its missteps. The lack of any form of deathmatch feels weird – especially when you consider the part that the Doom series played in the birth of the game mode. The lack of any form of Battlemode access during the review process is also somewhat troubling, but we’ll have more on that particular mode after it becomes available at the game’s launch.

As a whole, Doom Eternal is a solid game, and a great sequel. Unfortunately, it never goes beyond the scope that Doom 2016 set. While there are new mechanics and weapons, it just doesn’t offer that same sense of freshness that the reboot did. Platforming – while a strong addition to many parts of the game’s exploration – often feels heavy handed and forced. Some encounters require you to time dashes and jumps together.

Sure, I appreciated the puzzle-like nature of some of these instances, but others left me slowly losing armor or health as I plummeted to my death because it wasn’t very clear which direction the developers wanted me to go. I often found myself wondering ‘can I make that jump?’ only to discover that I couldn’t because it wasn’t how I was intended to proceed.

It’s very clear from playing through the entirety of the campaign that id Software has designed every encounter with a “right way” to play it, and going outside of the lines that have been drawn will cost you – whether it costs you a death, or just some health and armor, is all dependent on how quickly you learn to pull your crayon back inside the lines where it belongs.

This review is based upon a PC review copy of Doom Eternal provided by the publisher. Doom Eternal will be available on Xbox One, PlayStation 4, and PC on March 20, 2020.