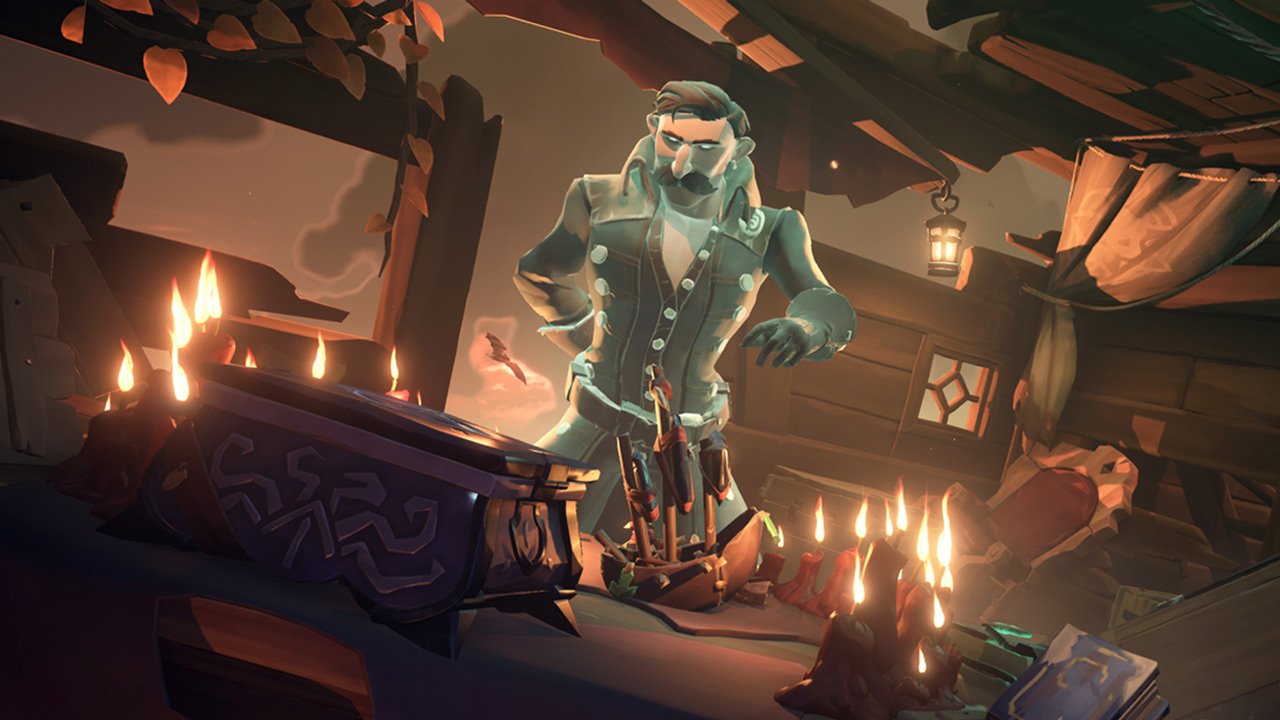 The Seabound Soul is Sea of Thieves’ latest Tall Tale campaign. This story introduces players to Sir Arthur Pendragon, the captain of the Blackwyche, and his journey to free the souls of his former crewmates.

How to start the Seabound Soul

To start the Seabound Soul Tall Tale, set sail to Shipwreck Bay at coordinates M-10 in the Wilds. Look for the shipwreck of the Blackwyche on the south side of the island. Climb the ladder into what was the captain’s quarters and then vote on the Seabound Soul book.

When the majority of your crew votes on the Seabound Soul, the Tall Tale will begin. Stay and listen to Sir Arthur Pendragon’s speech and then prepare for the adventure!

After starting the Seabound Soul Tall Tale, stand by Sir Arthur Pendragon and listen to his whole speech. You will receive a journal and a special lantern, both of these can be found in the quest radial.

Weigh anchor at the ghostly shipwreck and use the lantern to uncover the ghostly form of the rest of the ship. You are searching for a dead pirate, Captain Martha Jane. Find her apparition near the ground, along with her skull. Take the skull to the beach and give it to Pendragon.

After Pendragon’s speech, read the journal to discover where you must go next. The clue changes each time. You could be sent to Kraken's Fall, Fetcher's Rest, or somewhere else entirely.

When you reach the right island, look along the horizon for the next ghostly ship and set sail after it. Chase it down until, as before, you come across the scene where a ghost ship has sunk.

Unlike the previous ghost vignette, this one requires you to go to shore with your lantern. Raise the lantern to reveal the ghosts. Search for and then follow the footprints to a scene of a skeleton shooting Captain Randal Stone. Dig in the spot where Captain Stone died to retrieve his skull. Give the skull to Pendragon and then look in the journal for the next clue.

You will need to look at the picture of the island in the journal to work out where to go. The island will likely be in the Devil’s Roar. Sail close to the island and search the horizon for the next ghost ship. When you find them, give chase!

This last one is a little tricky. You will encounter the ghost ship in the middle of the sea and then it will disappear. Continue sailing straight, as the ship is actually hidden on the other side of Flintlock Peninsula.

Make landfall on the island and use the spectral lantern to find a funeral procession. Use the lantern and follow the procession into the heart of Flintlock Peninsula. Pendragon will meet you at the stone door. Pass through the door and continue around the corner to find a sarcophagus. Crack it open and take the skull.

Use the lever beside the door to exit. Fight your way past the skeleton captain and bring the skull to Pendragon, who waits just outside. After Pendragon frees the last soul, the Seabound Soul is finished! You will unlock the Sword of Souls for one completion and the Dragon Sails for getting all the commendations, which includes finding all the Seabound Soul journals.

There are five journals to find as part of the Seabound Soul Tall Tale. These journals are hidden across five different islands and only appear when the Tall Tale is active. You only need to find the journals once in order to unlock the commendation, The Ashen Journals.

The first journal is found in the Blackwyche, right behind the Seabound Soul Tale Tall journal. Find it on a crate in front of a chair.

The second journal is found on the north side of Shiver Retreat. It will be on some resource barrels below a rocky formation.

The third journal is found on Liar’s Backbone, up by the dead tree at the top of the island.

The second-last journal is on the eastern side of Scorched Pass, on a rock among the trees.

The last journal is on Flintlock Peninsula, on the north side of the island. Approach the top of the island where a little brazier is lit beside a seat. Further along are two resource barrels tucked between rocks. The journal is sitting on a little stool beside these barrels.

The Seabound Soul is one of Sea of Thieves shorter Tall Tales, but it’s rich with lore and untold consequences. Check out the Shacknews Shores of Gold Tall Tale guide as well as the Sea of Thieves guide and walkthrough for even more helpful content.