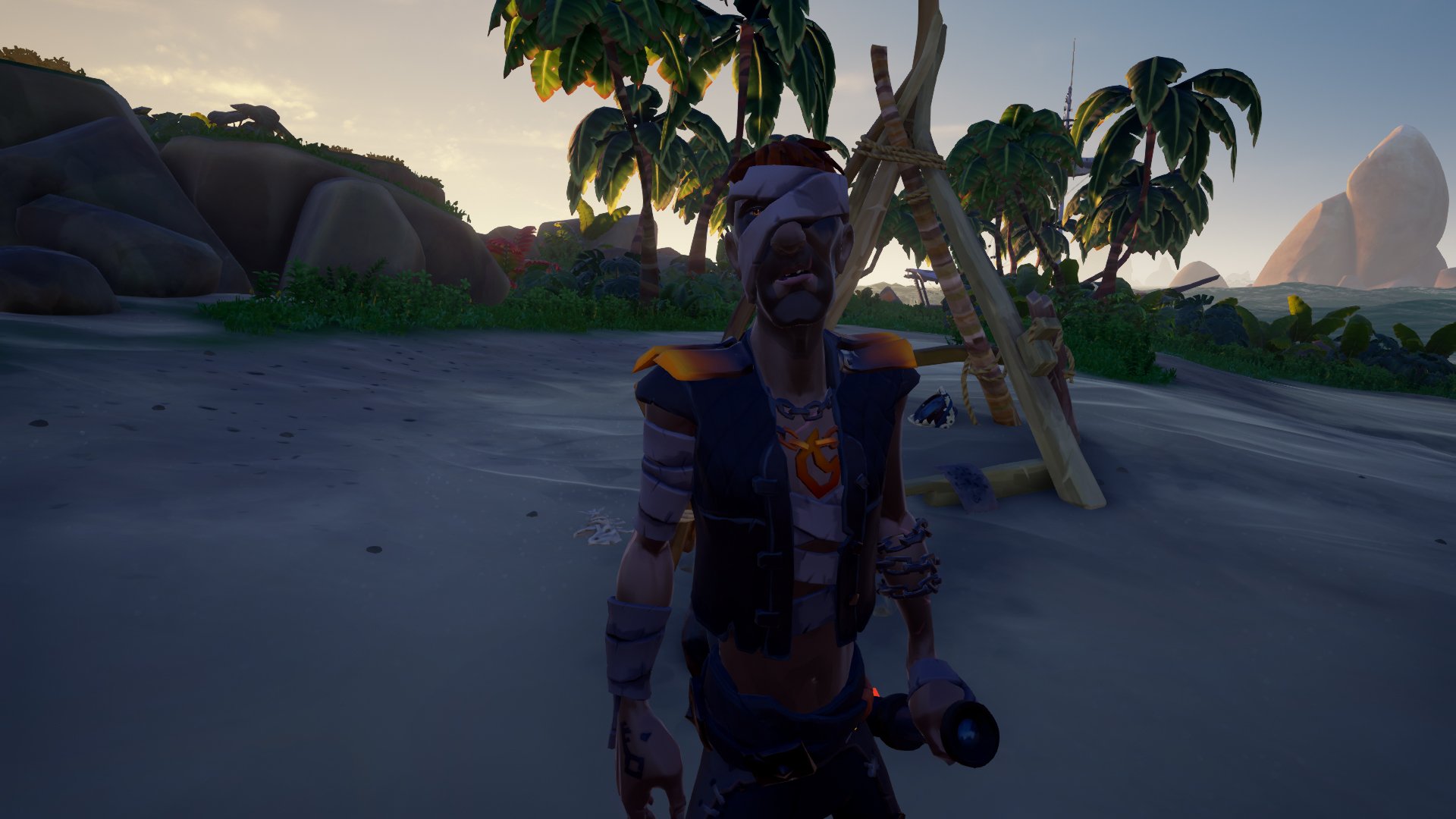 Where to find Stitcher Jim in Sea of Thieves

Finding Stitcher Jim is a little tricky in Sea of Thieves. This scallywag was hanging about certain areas of the world for a while when Forsaken Shores first launched, but since then has disappeared. Now, Stitcher Jim is back and he’s found a new island to call home.

Where to find Stitcher Jim

This landmass is split into a few distinct sections. Stitcher Jim can be found on the northwest side of the island, standing beside a tepee that contains a photo of Merrick and Derrick, and a drum. Stitcher Jim is dressed is in his iconic raggedy clothing and head bandage, and also holds a Devil’s Roar-themed spyglass.

Approach Stitcher Jim and talk to him to find a few dialogue options:

Hmm? Yes, I’m Stitcher Jim. Sorry, I don’t remember you. So much has happened since the Shroud opened. I just want to be useful, along with my beloved.

Didn’t you betray your Alliance and pin it all on Captain Morrow?!

Ah, I can’t tell you how much it stings to hear it aloud… but yes, you’re right. I was weak and foolish. Maybe I still am. I regret it every day. My master had his gilded claws in me… I became blinded by greed. I stole a Box of Wondrous Secrets and peered inside! And you know what I saw?  Myself. That… was… painful, to put it lightly. I almost lost my mind. Would’ve died of thirst in The Devil’s Roar if not for my beloved! It took a long time to claw my way back here and regain my senses. Now, my guilt stabs at me every day like a lance. I’ve wasted so much time… But this is the Sea of Thieves! Misfits of all kinds can find a place here. Duke gave me a second chance – to prove my worth and join the Bilge Rats!

What are you doing out here?

I don’t think I should show my ugly mug on the Outposts until after I’ve earned Duke’s trust, do you? It won’t take long, though. I helped him broker deals to sell those nasty old Rag and Bone Crates to the Seaposts. I’m good at bargaining! Some are just disposing of them, some are turning them to soap, plant food, amulets… maybe old rubbish really can become something good?

My beloved! The flame in my heart, the stars in my sky! No, she doesn’t say much. She likes her privacy. Please don’t disturb her. She found me, broken and dying in the Devil’s Roar. She rescued me, literally gave me a second chance at life. I’d do anything for her!

Speaking with Stitcher Jim unlocks the commendation, Lost and Scoundrel, which rewards 5 doubloons. There is another commendation that can be unlocked while on the island by collecting the drawings made by Stitcher Jim’s beloved. Completing these two is a great way to earn more doubloons is Sea of Thieves.

Once you find Stitcher Jim, you can get back to completing the Rag and Bone Crate deliveries for the Seaposts as part of the Smuggler’s Fortune update. Sail by the Sea of Thieves guide and walkthrough for even more helpful guides and event coverage!