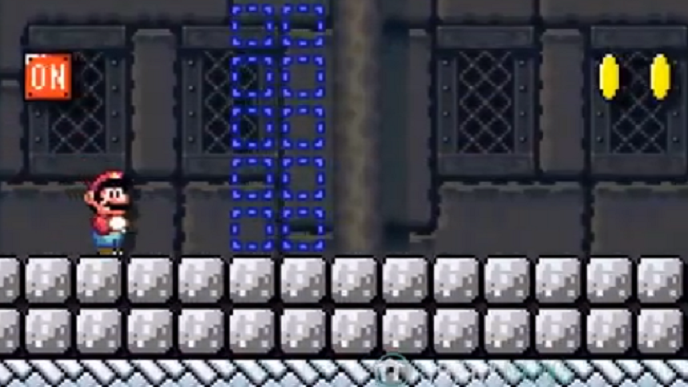 Super Mario Maker 2 hasn't even been out for one week, but there is one style of course that seems to be really popular on Nintendo Switch. That's right, levels featuring the ON/OFF Switch. While this seems totally innocuous on the surface, this is a new ON/OFF Switch item for course makers to get their hands on for the first time on Nintendo Switch. Nintendo, I know what you're doing and I love you for it.

The original Super Mario Maker on Nintendo Wii U was released in 2015. At the time, Nintendo was likely already working on their next generation console, Codename NX at the time. Super Mario Maker 2 has brought tons of new items, features, and gameplay mechanics to players for the first time, but it can't be a coincidence that the Big N didn't ship the original on Wii U with the ON/OFF Switch. Either way, we are seeing tons of creative takes on how to implement the ON/OFF Switch in Super Mario Maker 2 on the Nintendo Switch. Sigh, Nintendo. One such level that has been played tens of thousands of times is Switch x Switch by Maker Nore139 of Japan. Please take a look at his level (Course ID: DRC-388-TDF).

Maybe this is just a coincidence, but it just seems too perfect for the Nintendads over there in Redmond and Kyoto to come up with this silly joke that was four years in the making. The ON/OFF Switch could have been added with DLC to Super Mario Maker on Wii U, and it isn't like there was some sort of technology limitation. What do you think? Let us know in the comments section below.

In case you are just getting started with the game, be sure to check out our Super Mario Maker 2 wiki and FAQ. The game is out now on Nintendo Switch eShop but there is a Limited Edition that comes with Switch Online service.