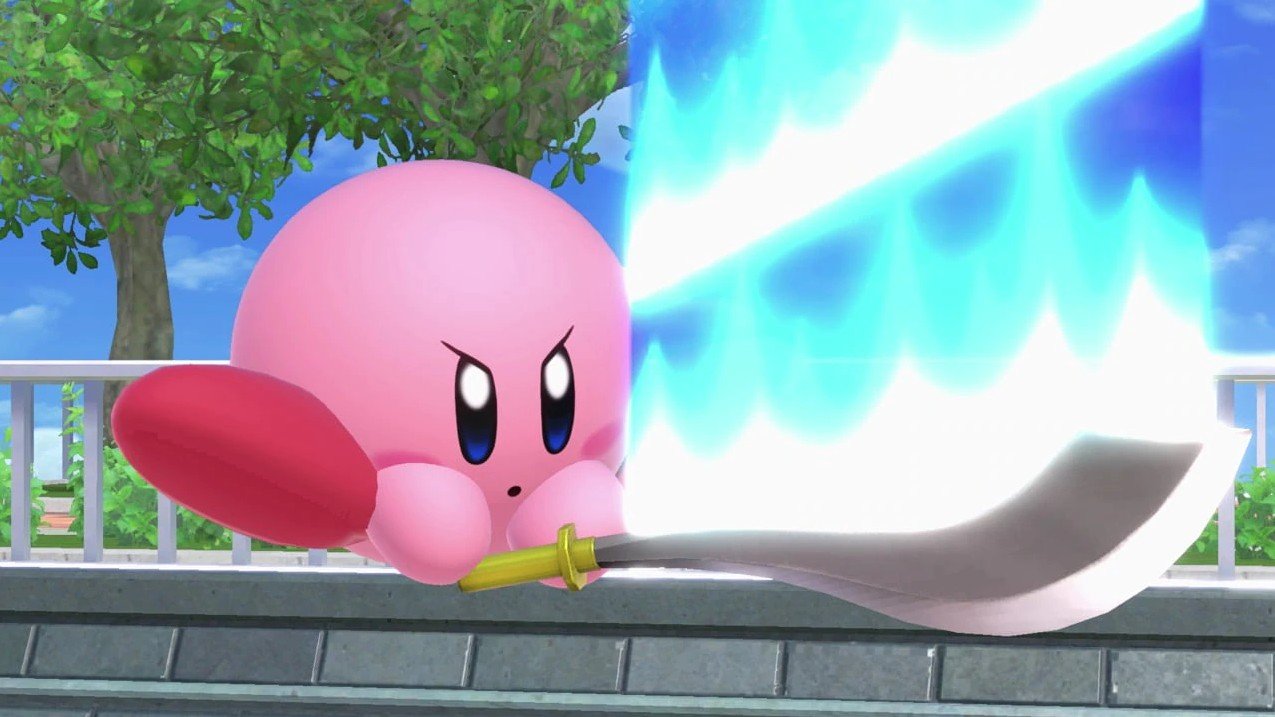 Today, we look back at one of the key members of the Super Smash Bros. roster..

Kirby is the pink puffball from Dream Land, one who is near and dear to the Super Smash Bros. series. After all, he was first created by series mastermind Masahiro Sakurai.

Hailing from Pop Star, Kirby stands out among the various Nintendo mascots. He's round, cheerful, playfully innocent, and he also has a bottomless appetite. He eats a lot, sucking in any food with a cartoon-like vacuum cleaner effect. He also swallows a lot of his enemies, using them to steal his powers. You won't see Mega Man doing that, will you?

Kirby isn't a traditional hardened warrior, but he won't hesitate to do battle with outside enemies like Nightmare and his rivals, like King Dedede. And contrary to the video above, King Dedede does not always sound like Foghorn Leghorn.

With Sakurai having worked with Kirby both in his core series and in Smash Bros., it stands to reason that their movement should be similar. Kirby is among the floatiest fighters in the Smash, with the ability to jump multiple times. His jumps won't get a lot of distance, but his recovery is among the best in the series. Just be aware that he's also one of the lightest characters in the series, which means he can get bullied by bigger guys like Bowser, Donkey Kong, and, yes, King Dedede.

Kirby's moves are mainly unchanged from past Smash Bros. games, but a handful of those moves come with some noteworthy improvements. The biggest change is that Inhale can now suck up certain projectiles, which can then be fired back at attackers as a star. Trying to use the copy function will dispose of the projectile and heal Kirby for a small percentage. And speaking of the copy ability, Ultimate introduces taunt cancelling, which means that if you Swallow an opponent, you can now get right back into the mix faster, instead of waiting out Kirby's taunt and watching helplessly as your opponents bash you.

Don't be afraid to mix it up with your opponents, either. Long-time Kirby followers will note that Kirby does a brief fireball morph with his dash attack. This is a returning feature from Super Smash Bros. Melee and makes it much safer for Kirby to try and kick off some up-close combos. As a bonus, the dash attack's momentum will no longer sling Kirby off the edge of the stage, meaning it's unlikely to backfire.

While casual players will likely still stand by Stone, the key to victory is knowing when to bring out Kirby's Hammer. Hammer can be fully charged, while allowing Kirby full freedom of movement. If an opponent is at a high percentage, try and catch them off-guard with a fully-charged Hammer. This will obviously be tougher in one-on-one scenarios, but in four-player free-for-alls, the Hammer can be king.

Kelsy "Supergirl Kels" Medeiros is mainly known for in-your-face Sonic play, but she'll still play Kirby regularly as her backup main. She was among the pros most excited to see the pink puffball in action and she's put together a solid analysis video. Among the primary points is that Kirby is much faster this time around, with a quicker dash and boosted aerial speed. She also points out some noticeable buffs and nerfs to some of his Smash attacks.

Chris "Falln" Rugg is among the pros that has been impressed with Kirby's Ultimate layout. In addition to airing his thoughts on Twitter, Falln has gone hands-on with the character quite a bit, going all the way back to E3.

I just realized for kirby in smash ultimate, tilts out of dash is important because it lets him go from dash to a crouching state. The dtilt itself is secondary, but low profiling out of dash can potentially be huge

And if you're looking for combo potential, Kirby looks to have that, too. Even with some added lag to his Up-Tilt, the net result looks to turn out positive.

DID ANYONE SEE KIRBY'S UP TILT WAS STILL COMBO'ING AT LIKE 70%?!

Lastly, let's check in with Samuel "Dabuz" Buzby, who has done some painstaking analysis on each of the Smash Bros. Ultimate characters so far. His analysis of Kirby appears favorable, as he notes the character's newfound potential to get right in the fray.

Days after this feature went live, Victoria "VikkiKitty" Perez got some valuable time with Kirby at DreamHack Montreal and noticed some new combo potential.

So after doing it a few times, I’m pretty sure Kirby’s dair actually combos into rock. Worked at higher percents too. This could also mean that dair in smash atks can actually be a confirm in this game since it isn’t in Smash 4 pic.twitter.com/7QLwmIPwWD

Super Smash Bros. Ultimate is set to arrive in December on Nintendo Switch. Shacknews will continue looking into each of the game's characters from now through the big day, so be sure to come back for more breakdowns over the coming weeks. For more in-depth information including character and Spirit unlock guides, be sure to head over to Shacknews' Super Smash Bros. Ultimate walkthrough and guide.