Today, we look back at a long-awaited return to the Super Smash Bros. roster.

Who are Ice Climbers?

Back when they were first announced for Super Smash Bros. Melee, the Ice Climbers felt like an unorthodox pick for a couple of reasons. The first reason being that they were a fairly obscure selection from a classic NES game of the same name. The other reason is that Popo & Nana were a tandem fighter, with players primarily controlling Popo and Nana playing backup. Little did anyone know that the Ice Climbers were ahead of their time. Smash fighters would get more obscure and would get more gimmicky as time went on.

So who are Popo & Nana? They're intrepid mountain climbers in parkas who encounter a variety of dangers along their path to the summit. Those dangers include evil furballs, birds, and a white polar bear sporting summer shorts and sunglasses. (It was the 8-bit era, things got a little weird.) Dodging falling icicles, Popo & Nana use their trusty mallets to climb to the top of each mountain and win the day.

The Ice Climbers are an admitted deep cut, but nobody is going to argue their effectiveness in the Super Smash Bros. world, where they quickly became favorites right up until they were left off the Smash 4 roster. 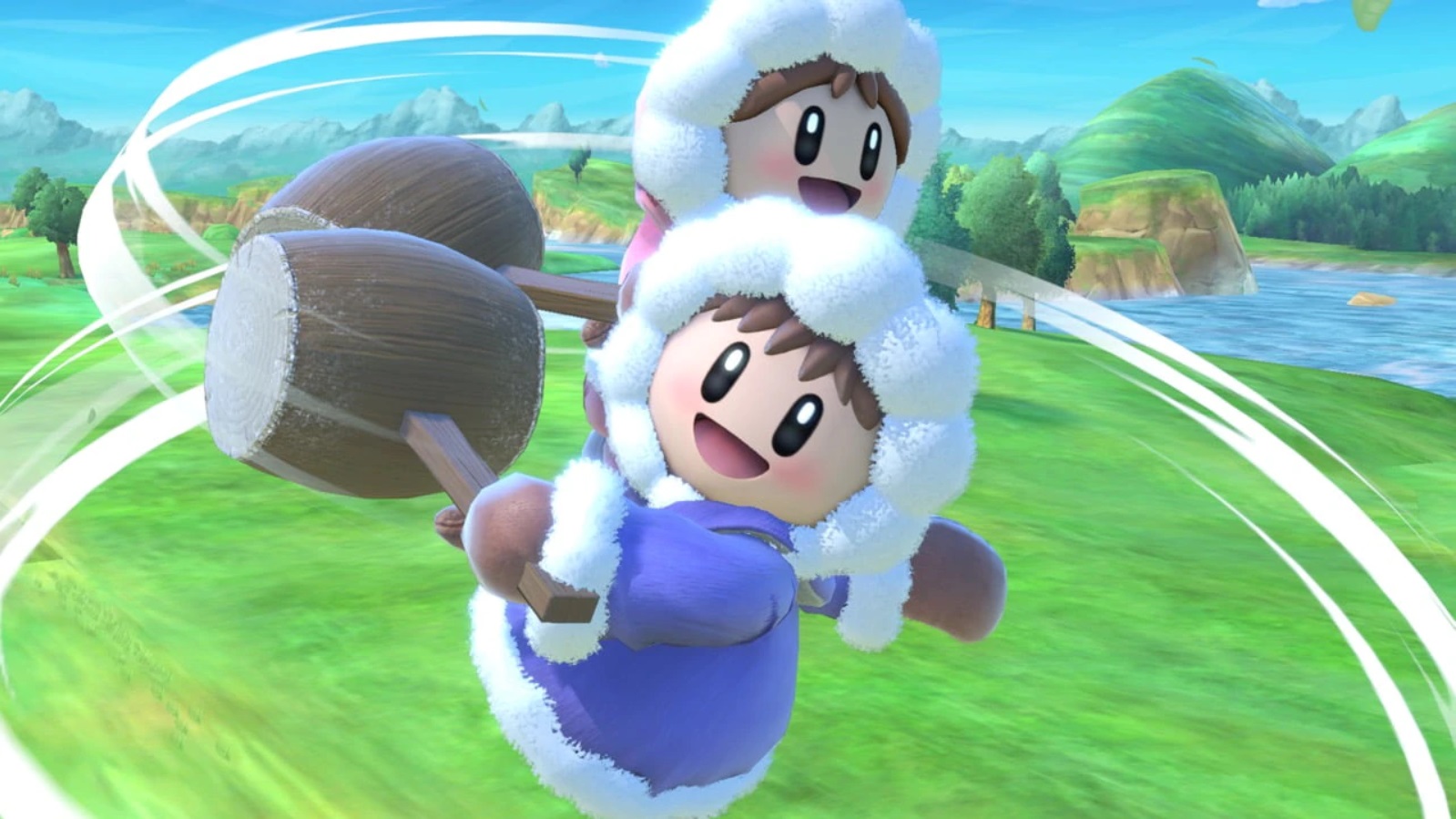 The Ice Climbers are interesting, in that they're the only tandem fighter in the game. And one of the peskiest things about them in Melee was their ability to "wobble," or perform an inescapable chain grab that would kill almost every time. But rejoice (or despair, if you're one of those wobblers) because the wobble is gone forever!

Yes, only Popo will perform a grab now, as Nana stands in the background. That means Ice Climber players can grab and throw or grab and bash for a limited window, just like every other character in the game. The playing field has been leveled.

The Ice Climbers are much more honest this time around. It isn't just that Nana won't help when Popo reaches for a grab, but when Popo is grabbed himself, she won't help anymore. She'll just stand there and watch. Some help she is, right?

Fortunately, the Ice Climbers are a tough out, hitting very hard and dealing heavy damage… when they're together! Moves like the Squall Hammer will hit for heavy damage, as will their Down-Smash. Their mallets get some great range, but if any opposition gets close, freeze them up with Blizzard. Blizzard is noticeably more effective than it was in the Melee days, despite it no longer being multi-directional, and can freeze opponents for longer periods. Take advantage of this and set them up for a big knockdown.

Whatever happens, though, keep Nana alive. More than ever, Popo is severely handicapped without Nana around and is easily dispatched without her. 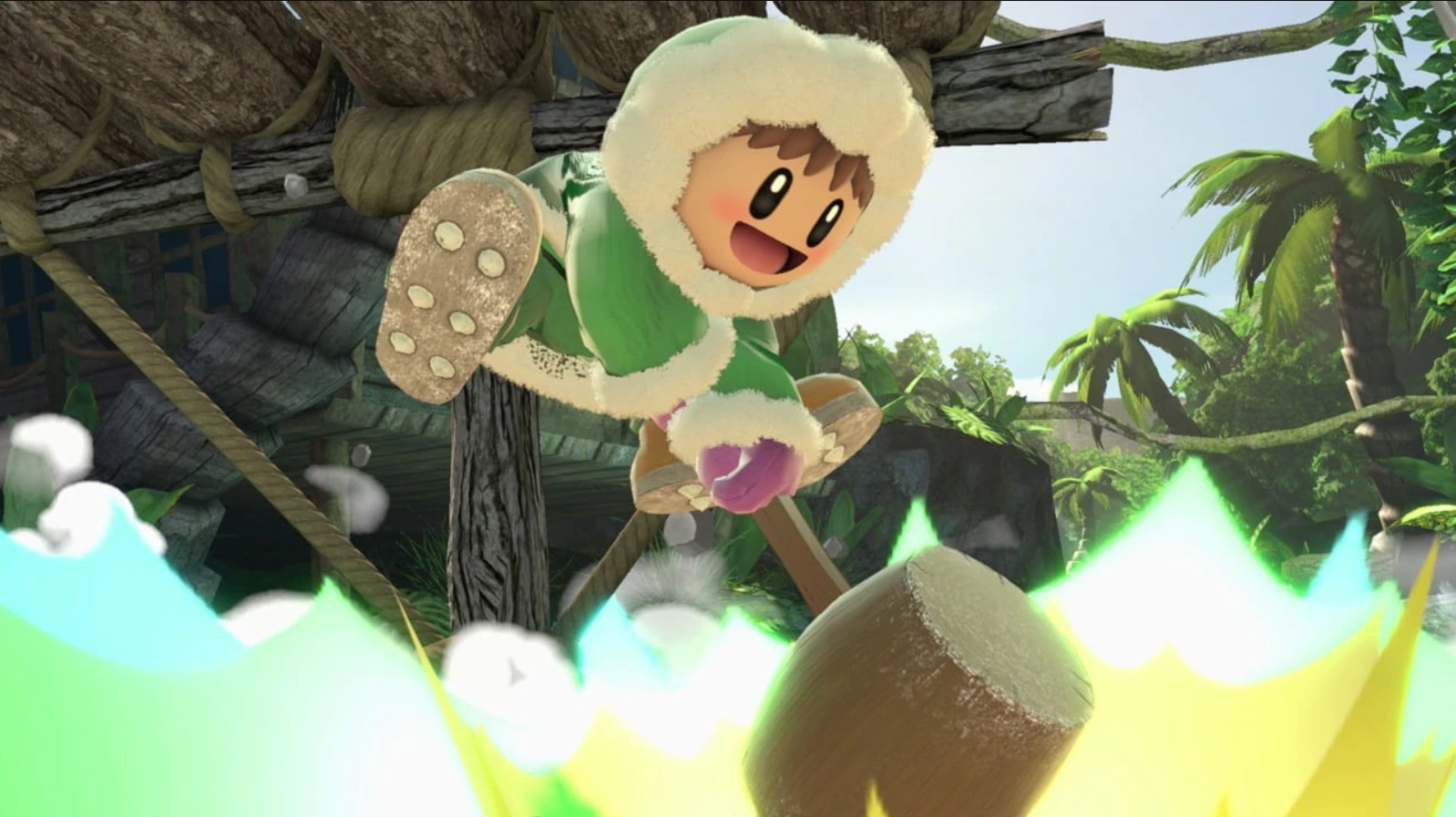 There seems to be some positive buzz for Ice Climbers so far, particularly from the Smash 4 community. Tyrell "NAKAT" Coleman is especially high on the mountain-climbing duo, noting their high damage potential.

Crazy kill potential
Strong damage output
Dsyncs are still possible
Chaingrabs impossible
Uair has a diff animation and is a kill setup out of dthrow...like a hooh hah
Very fun still!
I think they are solid!!!

But let's address the elephant in the room. What's everyone's reaction to the wobble fix? Let's start with Michael "Nintendude" Brancato, noting the benefit of the Ice Climbers' aerials:

ICs can't roll or spot dodge desync, but I can desync out of pivot forward smash. Also, their aerials have almost no landing lag. Uair is changed to an upwards hammer swing.

And the man who invented the wobble in the first place? What does Robert "Wobbles" Wright think? The jury's out, but look for a verdict after EVO.

gonna be ICs at Evo by the way, we'll see what happens

The wobble fix is about more than just removing an infinite grab, though. It's about making Nana overall less useful in certain situations. That's something Ice Climbers players will have to account for going forward.

Griffin "Fatality" Miller is certainly looking forward to a more even playing field.

So, with techable footstools, regrab timers still applicable, and SDI, we may finally have an Ice Climbers without an infinite, which honestly sounds really interesting to watch/play against. Here's hoping!

Without wobbling, moves like Blizzard are more vital than ever. But also, there's taking advantage of the potential of desyncing the two characters to attack separately. Here's Julian "Jtails" Martinez to explain.

And lastly, on the lighter end, there is one final thing to note about the Ice Climbers, this observation from Chris "falln" Rugg.

Super Smash Bros. Ultimate is set to arrive in December on Nintendo Switch. Shacknews will continue looking into each of the game's characters from now through the big day, so be sure to come back for more breakdowns over the coming weeks. Need impressions on the game as a whole? Check out our recent hands-on from San Diego Comic-Con. Beyond that, find more information concerning Big N's latest brawler by headiung over to Shacknews' Super Smash Bros. Ultimate walkthrough and guide.