For many, Street Fighter V represents the latest installment of a celebrated fighting game franchise. However, it's easy to forget that there's a substantial amount of story and narrative placed into the game's mythos and each of its characters. After all, one of the most intriguing things about Capcom's initial reveal was Charlie Nash's return from the dead. The Street Fighter world has been deep enough that several movies have been based on its characters and story. No, I'm not just talking about the "so bad, it's good" 1994 live-action film. There have been anime adaptations, television shows (with Bison making "YES!" into a meme far earlier than WWE's Daniel Bryan ever did), and a Machinima-produced web series with a sequel currently in the works.

Capcom has paid reverence to Street Fighter's narrative in a number of ways throughout the years and now it's looking to go all in with an in-depth story that's so intricate, it won't be ready until this summer. So while fans of the story wait for this tale to be told, they can play through individual characters' Story Mode. As noted in our review, these tales are very short. In fact, a character's Story often times won't run any longer than ten minutes. But that doesn't mean there aren't questions worth asking leading up to the big Cinematic Story expansion later this year. Today, Shacknews is going to ask a couple of these questions. 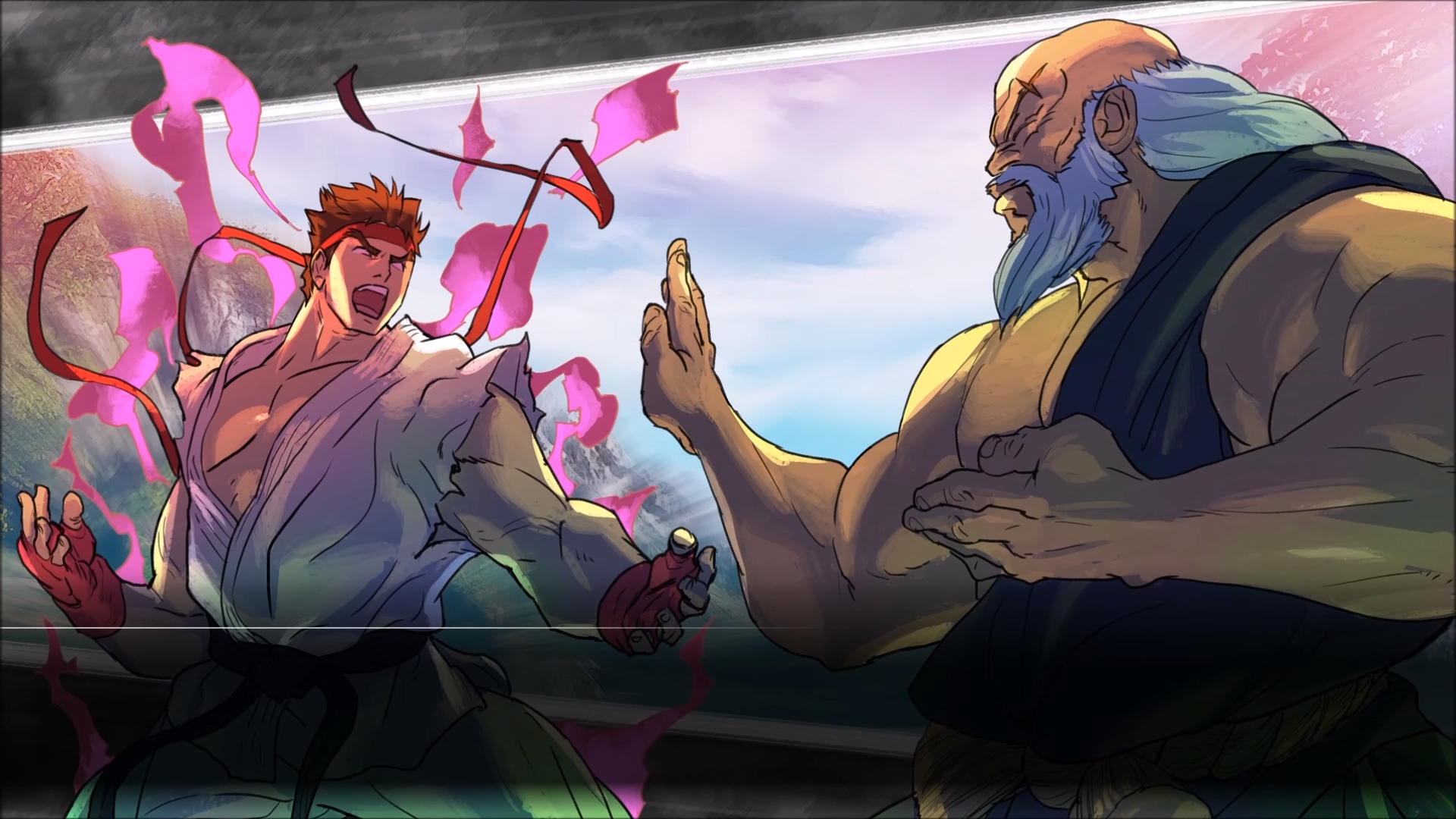 Can Ryu keep the murderous urges of the Satsui no Hado in check?

One of the central struggles that Ryu has faced over the years has involved keeping the dark energy known as the Satsui no Hado suppressed. It's an inner conflict he's faced since the very first World Warrior tournament when he unleashed it against Sagat. In Street Fighter V, that struggle has become greater than Ryu could handle, as he almost unleashed it during a training session on his master, Gouken.

In terms of motivation, this Ryu is different from other games in the series. He's not searching for a challenge or looking to be the best. He's questing for an alternate path in his journey and a way to suppress the darkness, once and for all. It won't be easy. Ken has wondered aloud in his story whether the Satsui no Hado even can be suppressed, while Ryu nearly gave into the urge again while sparring with Laura during her story.

What's interesting is that Ryu's journey briefly intersects with Nash's, with both observing their dark power tied to one another. While Nash seeks to embrace this power as the key to defeating Bison for good, Ryu knows that he can't allow himself to surrender to that level of darkness. He's foreseen the power of Evil Ryu and realizes he cannot unleash that on the world. 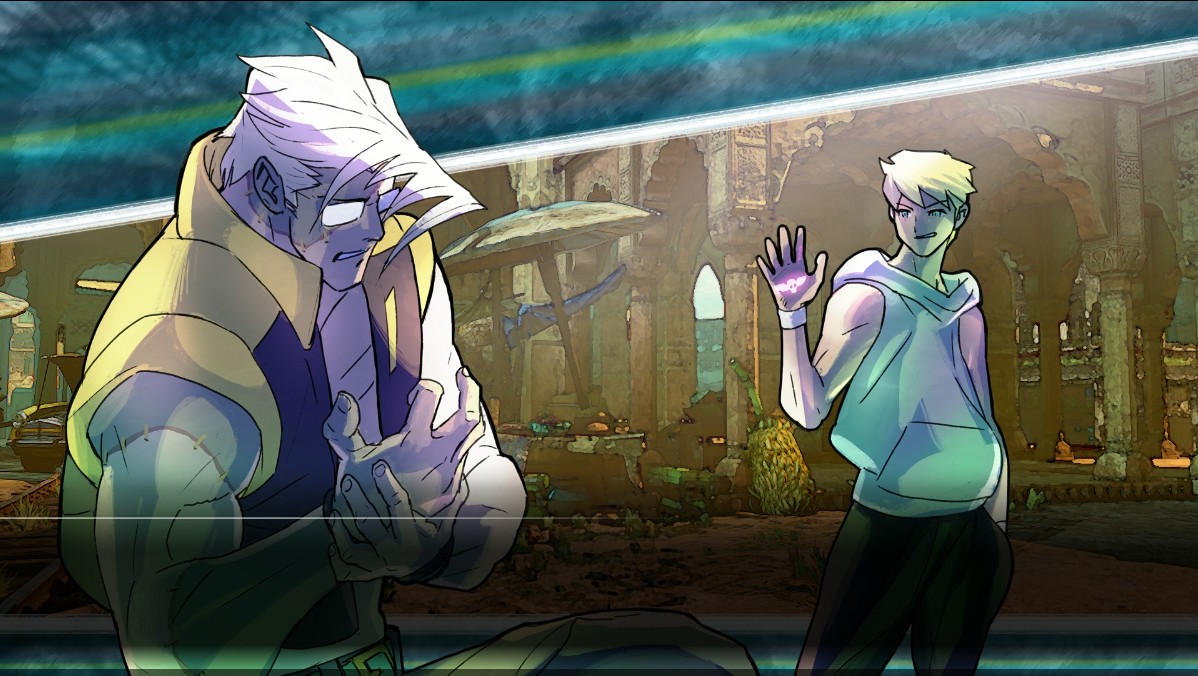 Who is Ed and how did he acquire Psycho Power?

As mentioned, there's a mysterious force that has brought Charlie Nash back to the realm of the living. What exactly is this power? Nash's story centers around this mystery, but along his way, he runs into a strange young street urchin named Ed. When the unhinged Nash tries to interrogate him, Ed wards him off with a blast of Psycho energy, the same force that powers Bison.

So who exactly is this guy? How did come to acquire this Psycho Power? Is he working for Shadaloo alongside Bison and his cronies? Is he another result of the organization's experiments, similar to the Dolls? Is he an apprentice or something else entirely? His all-too-brief altercation with F.A.N.G. seems to indicate a less-than-amicable relationship with the evil organization. But more importantly than all of that, how does he know that Nash returned from the dead… and how does he know how long Nash has left to live?

Whoever Ed is, it's certain he'll play a large role in the upcoming Cinematic story, especially given what he seems to know about Nash. 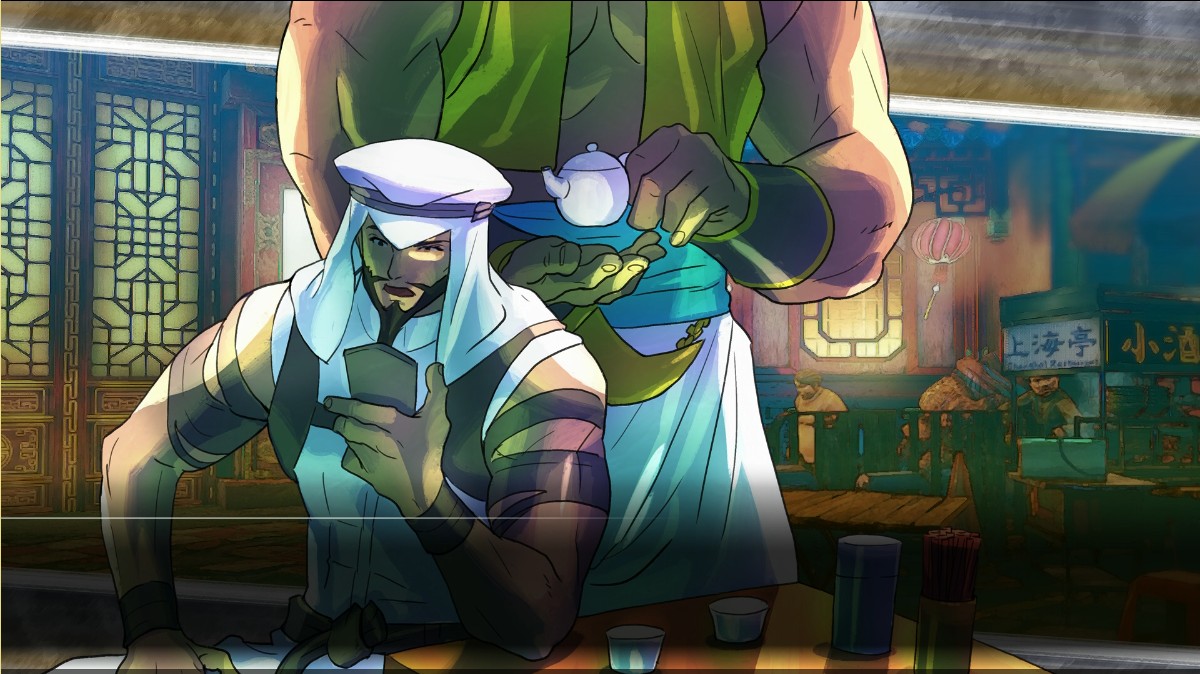 Who is the friend that Rashid is searching for and how did they get mixed up with Shadaloo?

One character trait that's been hammered home with newcomer Rashid is that he's something of a social media-savvy, internet surfing millennial. It's how he's learned about masters like Ryu and Dhalsim, but it's also how he's stayed connected to his friends. One of those friends appears to have gotten in over their head with Shadaloo. Once a frequent contact, this person has fallen off the grid and hasn't communicated with Rashid in weeks.

This spells out Rashid's motivation for competing against Street Fighter's best, as he's looking to improve his own skills so that he can eventually infiltrate Shadaloo's base. The Cinematic expansion will go further into this, as we learn more about Rashid's mysterious friend and how that person got mixed up with S.I.N. and Shadaloo in the first place. 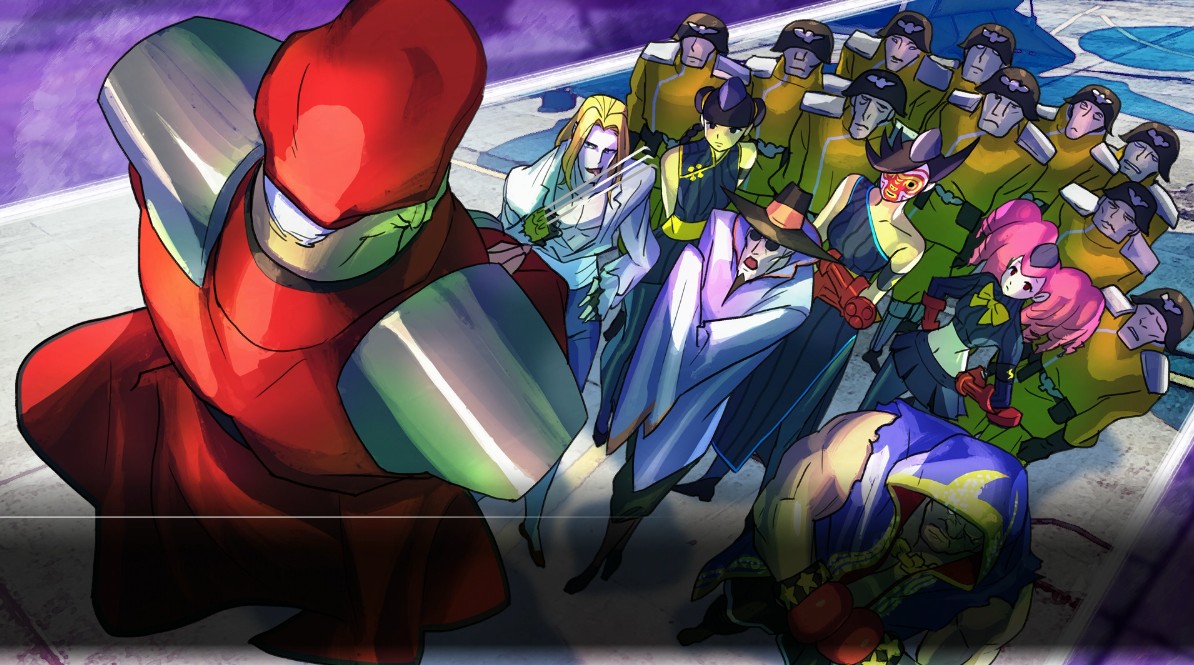 What is Operation C.H.A.I.N.S. and what role do the Dolls play?

Following her harrowing encounter in Ultra Street Fighter IV with Decapre, Cammy has made it her mission to liberate all of Bison's Dolls from his control. However, it looks like the Dolls are being prepared for another mission. After quickly dispatching Birdie, Cammy is confronted by new Shadaloo lieutenant F.A.N.G., who reveals the existence of a secret plan called Operation C.H.A.I.N.S.

Not much is known about exactly what this evil undertaking entails, but whatever it is, the Dolls appear to play a key role in it. Former Doll Juni, fresh out of her coma that she suffered prior to the events of Ultra Street Fighter IV, was targeted by Shadaloo henchmen, including Vega. Birdie has also hinted that Decapre is still alive and is undergoing reprogramming for the battle ahead. The operation may also have to do with F.A.N.G.'s former cartel, which specialized on creating warriors immune to the world's most powerful poisons. Bison exterminated that cartel, but left the highly-immune F.A.N.G. alive. It may also have something to do with this: 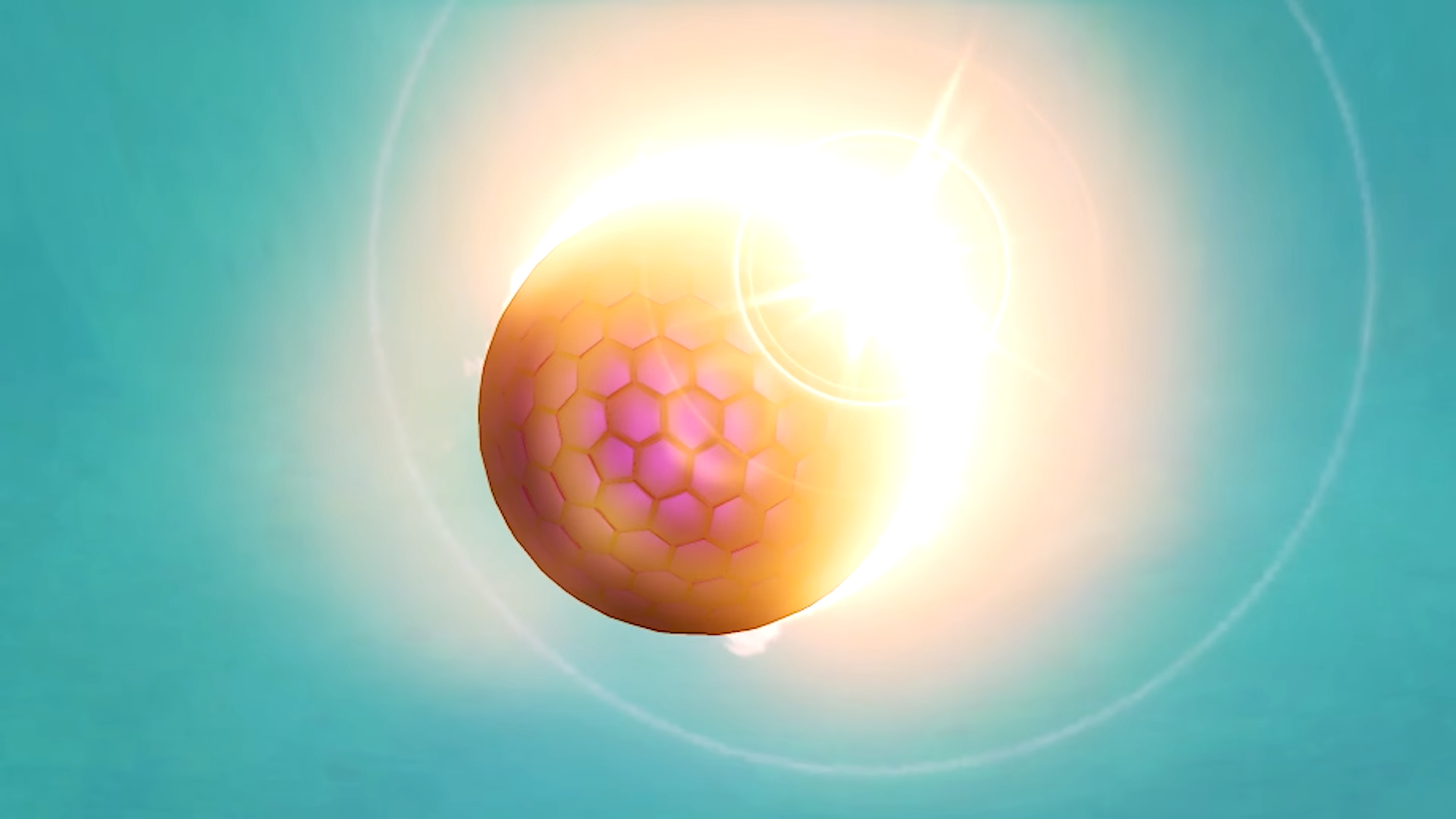 Remember that the Cinematic expansion trailer showed a massive Shadaloo satellite taking to the skies before plummeting to Earth. Expect this to contain something very similar to the poison that F.A.N.G. is immune to, but something that could kill everyone else on the planet.

Cammy's role in the Cinematic expansion appears to be getting to the bottom of whatever Operation C.H.A.I.N.S. is, but her mission won't go without resistance. Her story ended with the ominous appearance of Ultra Street Fighter IV's Juri, who may be ready to return as a playable character around the time of the expansion's release. 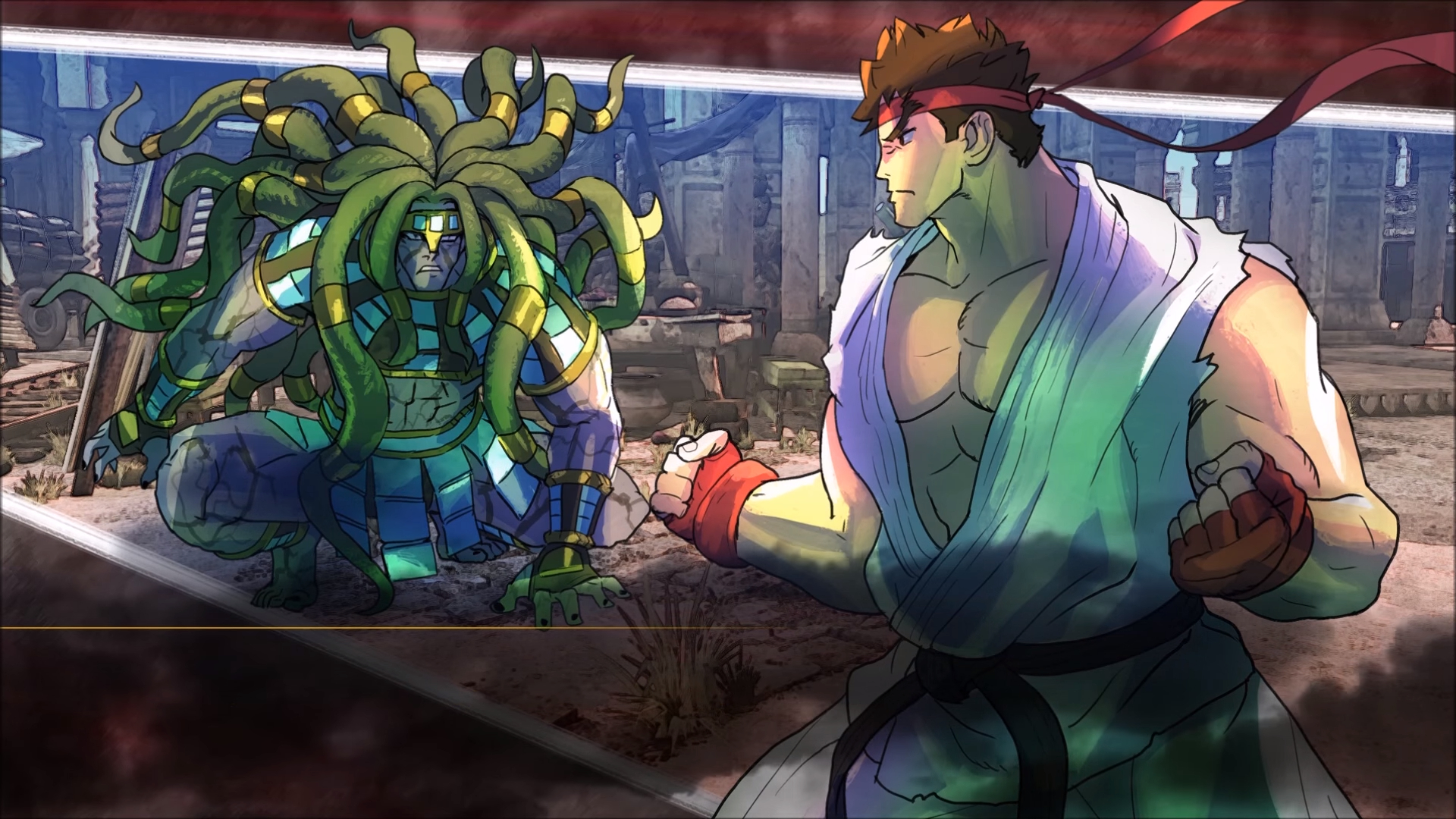 Can Necalli be contained?

There's a new evil force out there, which is nothing new in the world of Street Fighter. However, antagonists like Bison or Akuma have always been focused with goals fit for men. Necalli is decidedly different. He appears to be an agnostic force of nature.

"Devour" is no mere catchphrase. Necalli looks to be a parasitic organism, feeding off the very essence of powerful warriors. His arrival into Street Fighter V coincides with an ancient prophecy, in which he wanders the earthly plane in search of souls. The more powerful the soul, the more Necalli is sustained, which doesn't bode well for the likes of Ryu, Dhalsim, or Bison.

Street Fighter has dealt with its share of combatants, each with goals that range across the spectrum of good and evil. But Necalli is one of the first to serve a natural chaos. He stands to be a major wild card in the upcoming Cinematic expansion. Can anything stand against him? Can his hunger possibly be satisfied? And will any of Street Fighter's mainstays fall in battle trying to stand against him?

For those that have played through Street Fighter V, are there any other observations about the characters' story arcs you might have made? Anything we may have glossed over when playing through as Zangief, Birdie, R. Mika, Laura, and others? Join the conversation and let us know in the comments.