EA and Visceral Games are taking the Battlefield series in a new direction with Battlefield Hardline. Rather than focus on military options, this is all about cops and robbers, attempting to put a gritty crime drama spin on a tried-and-true FPS formula. It's a great idea in theory and one that works in places, but it ultimately feels underutilized and ends up being something of a disappointment. 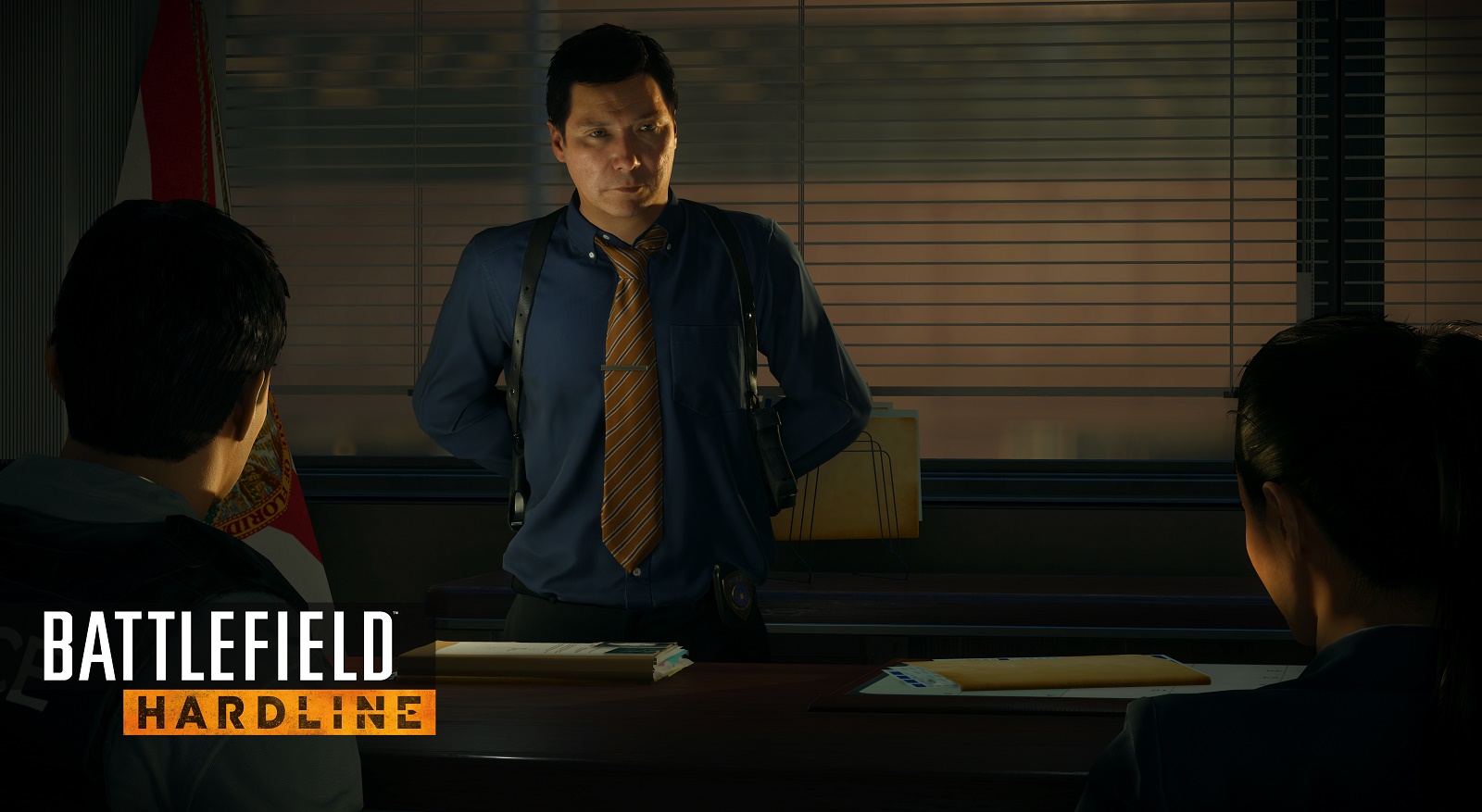 The Battlefield Hardline campaign shows the potential to be something gritty and engaging. The story sees players control a Miami detective named Nicholas Mendoza, who's simply trying to make the streets a better place by putting away drug dealers, traffickers, and other hardened criminals. He's quickly caught in a major scandal involving corrupt cops and winds up doing some hard time himself, before preparing to dispense true justice to his crooked colleagues.

EA and Visceral brought together writers from some of the best television shows of the genre, so it comes as a disappointment that the final product wound up being an unremarkable plot filled with convoluted plot points, cop cliches, and some cringe-worthy dialogue in the wake of recent events. It certainly didn't help that some of the writing was hindered by some ill-timed gameplay sequences. One example comes early with Mendoza in a car chase, talking about the chase protocol until his partner tells him to basically just forget it and hit the gas. All that was missing was for him to say, "This is a video game! Just punch it!" The story becomes less of a cop trying to do things by the book and mostly devolves into a shooting gallery. Visceral went out of its way to create a crime drama atmosphere, complete with beginning and ending episode montages. But at those points, I felt more like a military soldier and less like a police officer.

There are several open levels in Hardline that allow players to proceed at their own pace and use their choice of tactics. By far, this when the campaign is at its best. There are numerous stealth options to take beyond simply sneaking around a complex. Players can utilize their gadgets in effective ways, like using a grappling hook to climb to a roof and pick off targets with a sniper rifle or zipline across the stage. Gadgets are put into good use in these wide open spaces. Unfortunately, there aren't enough of these sequences in the campaign.

Many sequences feel too linear and constricted, forcing more direct approaches. In fact, some sequences will put players directly in the line of fire without stealth or non-lethal options. These sequences don't offer much opportunity to use the police gadgets or alternate tactics. They end up as overly simplistic stealth sequences that often turn into shootouts. The upside, however, is that the mechanic that has Mendoza flash his badge to keep suspects in place is an enjoyable one. This is where I felt like a cop, holding a perp in place until moving in for the arrest. No-kill playthroughs of certain stretches are entirely possible and a legitimate challenge, one that's far more fun than simply gunning guys down.

One of the other major issues with Hardline, which extends into multiplayer, is hit detection. Hit detection gets awfully wonky at times, but it goes beyond leaving aggressors in front of a sniper rifle unharmed. It also gets in the way of stealth sequences, especially when trying to distract enemies. There's a mechanic that has players toss a shell in the distance to attract attention in that direction. This mechanic is a complete crap shoot, with many perps not hearing the shell, the shell bouncing off the ceiling in front of you, or even getting caught in a stuck spot and hanging in mid-air. Regardless, this mechanic does more harm than good and often brings bad guys your way. Worse yet, collision detection issues will sometimes get in the way of trying to make an arrest. If a perp is clipping through the wall, you'll accidentally melee strike the bad guy, blowing your cover. This is a major problem with assigning the arrest and melee functions to the same button. I've had to restart from checkpoints several times because a hit didn't register or a suspect saw me through a wall that he shouldn't have. 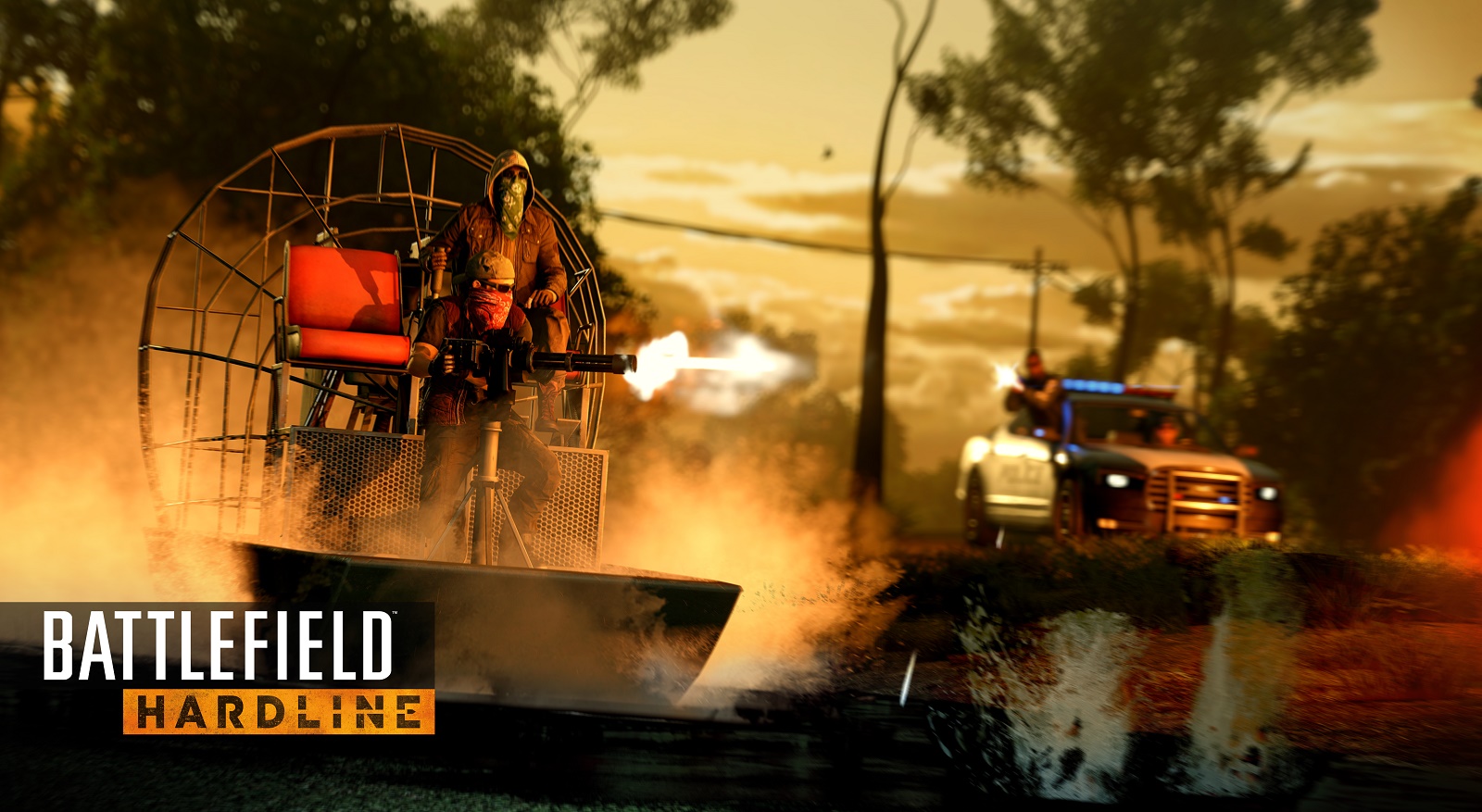 Battlefield Hardline's multiplayer likewise saw the transition to the cops and robbers theme and when it sticks to that idea, it works. Hotwire, in particular, is the most entertaining addition to the playlist. Rather than seize control of assigned points, as in Conquest mode, teams must take control of vehicles and stay in control of them for victory. It's absolute chaos in the best way, only held back by the relatively small size of the maps that makes it all too easy to exit their borders. A chase can be stopped dead in its tracks when a car leaves the map, which takes players out of the moment.

Hardline's 5v5 modes, Rescue and Crosshair, do the best to take advantage of the game's theme. When coordinated, teams can come up with creative ways to get across the map, using the gadgets at their disposal. Cool toys like the grappling hook and zipline go a long way towards making these game modes feel fresh and add a good degree of strategy.

Unfortunately, Hardline's other game modes do little to take advantage of the theme. Aside from Heist, which sees teams of criminals busting into a bank vault to escape with loot, most of Hardline's multiplayer modes feel like they don't fit with the cops and robbers theme. Team Deathmatch and Conquest definitely feel out of place and don't mesh well with the concept at all. Visceral does its best to sprinkle in a few ideas that support it, though, like melee takedowns that lead to on-the-spot interrogations, which reveal enemy locations on the radar. And while toned down somewhat, the "levelution" elements are still a great source of spontaneous chaos. It's especially welcome in 5v5 affairs, where a piece of the level can come crashing down and alter the playing field, requiring a sudden change in strategy for subsequent rounds.

At the very least, the aforementioned Heist and Blood Money do offer some exciting moments. Heist gets tense when criminals are trying to take loot bags to the extraction point, even if they simply turn into a shooting gallery and throw any pretense of strategy out the window. Meanwhile, Blood Money is a fun, mindless romp, with teams grabbing money from a central point and bringing it back to their vault. Those sessions will eventually devolve into teams trying to invade each other's vaults to try and steal from them, which often leads to some crazy shootouts.

Battlefield Hardline feels like a valiant attempt from Visceral and EA, but the gritty crime drama that they're aiming for comes out as an underwhelming effort. Multiplayer offers some fun moments, but it doesn't do enough with the concept to feel like a major leap in the world of first-person shooters. Meanwhile, the campaign feels bogged down under the weight of silly cliches and doesn't offer enough of a tactical, strategic cop experience.

Hardline does show occasional flashes of brilliance, though, so there's definitely something worth pursuing here. With a stronger emphasis on open area stages and multiplayer modes that utilize the police arsenal, Visceral could craft something much stronger in the future. Further investigation is required.

This review is based on an Xbox One download code provided by the publisher. Battlefield Hardline will be available in retail stores and on Origin, the Xbox Store, and PlayStation Store on March 17. The game is rated M.