The zombie plague has spread to PC today with the arrival of Dead Rising 3: Apocalypse Edition. Our review for that is up now, but now it's time to take a look at the history of the Dead Rising series and how it's progressed from a simple movie homage to a vast open world crawling with the undead.

The story begins in 2006 and the inspirations are exactly what you'd expect them to be. 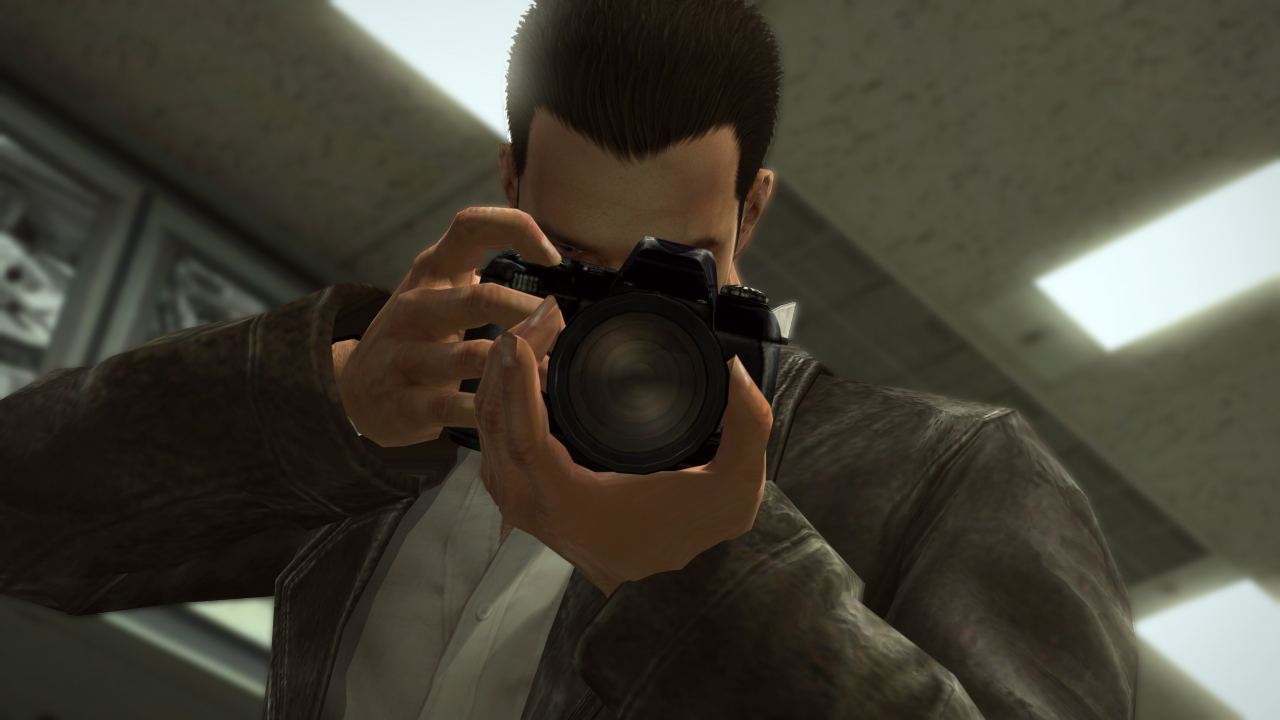 With 2006's Dead Rising, Capcom didn't simply create a zombie survival game, it created a new hero in the form of reporter Frank West. West wasn't a "dudebro" with heavy weaponry. He was simply a reported looking for the truth, as he not only took down zombies by the dozens, but worked to get to the bottom of what caused the outbreak in the first place. Frank's classic quote of "I've covered wars, you know," firmly entrenched him as one of Capcom's most beloved characters and his actions cemented this reporter's badass reputation.

Though Dead Rising relied on what would become the tired trope of zombies in video games, it managed to innovate in many ways. Time would become meaningful, as Frank would only have 72 hours to complete his tasks in the Willamette Parkview Mall before his helicopter would swing around for pickup. Once time expired, the game would end in one of multiple ways, either granting resolution or encouraging the player to try again.

Aside from the 72-hour mode, Dead Rising would establish itself as the go-to franchise for zombie-killing weaponry. This would prove to be the series' calling card, offering deadly killing machines, as well as sources of levity. For every serious weapon, like the chainsaw, there was a zany item, like the shopping cart. There were also several opportunities for novelty wardrobe changes, which gave Frank the chance to dress up in Servbot helmets or tennis gear. This went a long way towards keeping Dead Rising fun and not letting it take itself too seriously. It also led to some neat photo opportunities, giving players a chance to take advantage of the game's photography feature.

If the premise of survivors in a shopping mall filled with zombies sounds familiar, that's because Dead Rising was fully inspired by George A. Romero's classic 1978 film, Dawn of the Dead. Of course, it might have taken a little too much inspiration, according to the film's creators. In 2008, the MKR Group filed a lawsuit against Capcom, accusing the publisher of directly ripping off the Dawn of the Dead concept. Later that year, a U.S. judge threw the suit out and ruled in favor of Capcom, citing that the broad concept of humans surviving against zombies in a shopping mall is unprotectable. 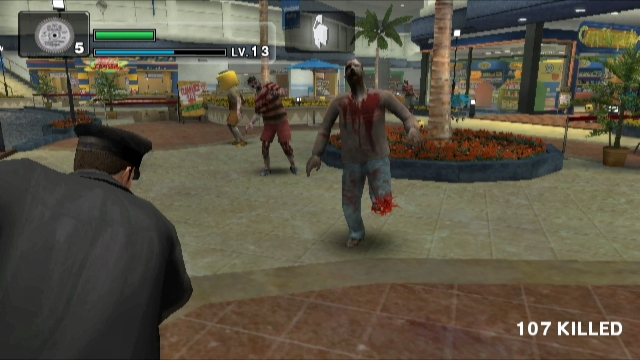 It feels like a lifetime ago when Nintendo had the best-selling console in the world, but that was the case when the Wii debuted shortly after Dead Rising's arrival. To take advantage of Nintendo's juggernaut, Capcom created a port called Dead Rising: Chop 'Til You Drop.

"Take advantage" is a strong term, though, and it's one that doesn't really apply here. The Wii's significant technical shortcomings meant that it couldn't come close to filling the screen with zombies, thus defeating much of Dead Rising's initial appeal. Capcom was only able to fill the screen with a couple of zombies and attempted to fill the void with "exclusive" enemies, like deadly zombie parrots. The result was abysmal and it would be the one and only time a Dead Rising title would land on a Nintendo platform. 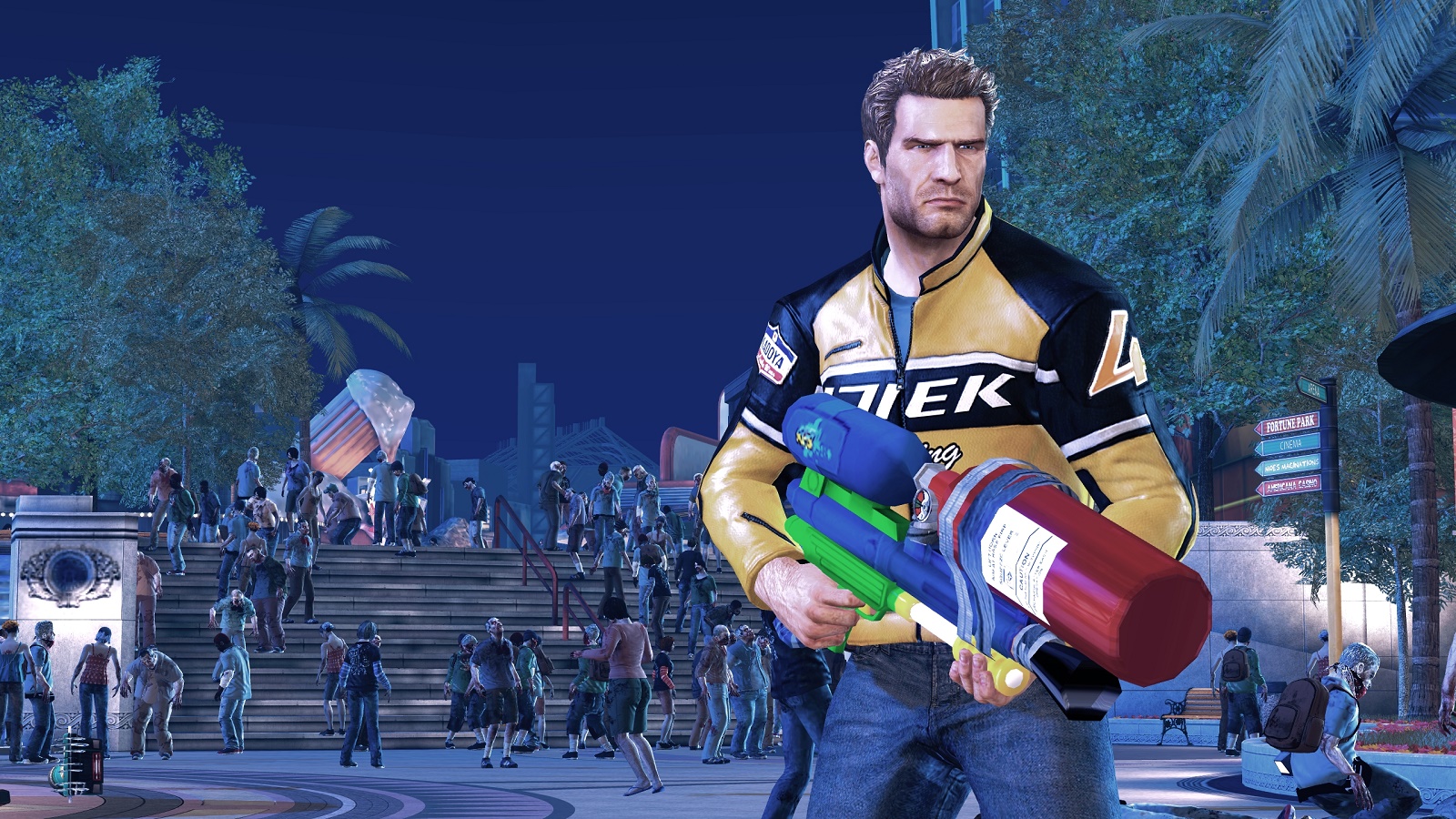 Capcom released the official sequel to Dead Rising in 2010, passing the series along to Capcom Vancouver. Dead Rising 2 was met with simultaneous dread and anticipation. While fans were eager to go back to the zombie-slaying fun of the first game, they were disappointed to hear that beloved frontman Frank West would not make the trip. Instead, Capcom Vancouver would introduce Chuck Greene, who would go from a shopping mall in a small Colorado town to the big casinos of Fortune City.

Taking place five years after the events of the first game, there is now zombie vaccine medication called Zombrex, which prevents a zombie victim from turning for a 24-hour period. Chuck has to track down Zombrex for his daughter, but he quickly learns that he's been framed for the zombie outbreak in Fortune City. That gives him 72 hours to find the evidence he needs to clear his name before the military arrives to clean up the undead mess.

One of Dead Rising 2's major contributions to the series was the addition of Combo Weapons. By picking up Combo Cards, Chuck could create playful combinations of weapons, leading to new and creative ways of dispatching zombies. While Frank West and his trusty shopping cart were fun, Dead Rising 2 opened a whole new world of destructive potential with MacGuyver-style contraptions like combining a gas canister and a water gun to make a flamethrowr or a robot bear with an LMG to create a gun-toting Freedom Bear. The list of combo weapons was vast and inventive, truly marking a step forward for the series' second installment.

Of course, there's only so much fun to be had alone. The other big addition to Dead Rising 2 was online co-op, in which two Chucks could gang up and complete the story or simply cause general mayhem. Players could level up as normal and revive one another if someone goes down. However, co-op had its limits, namely that only the host player could save their story progress. 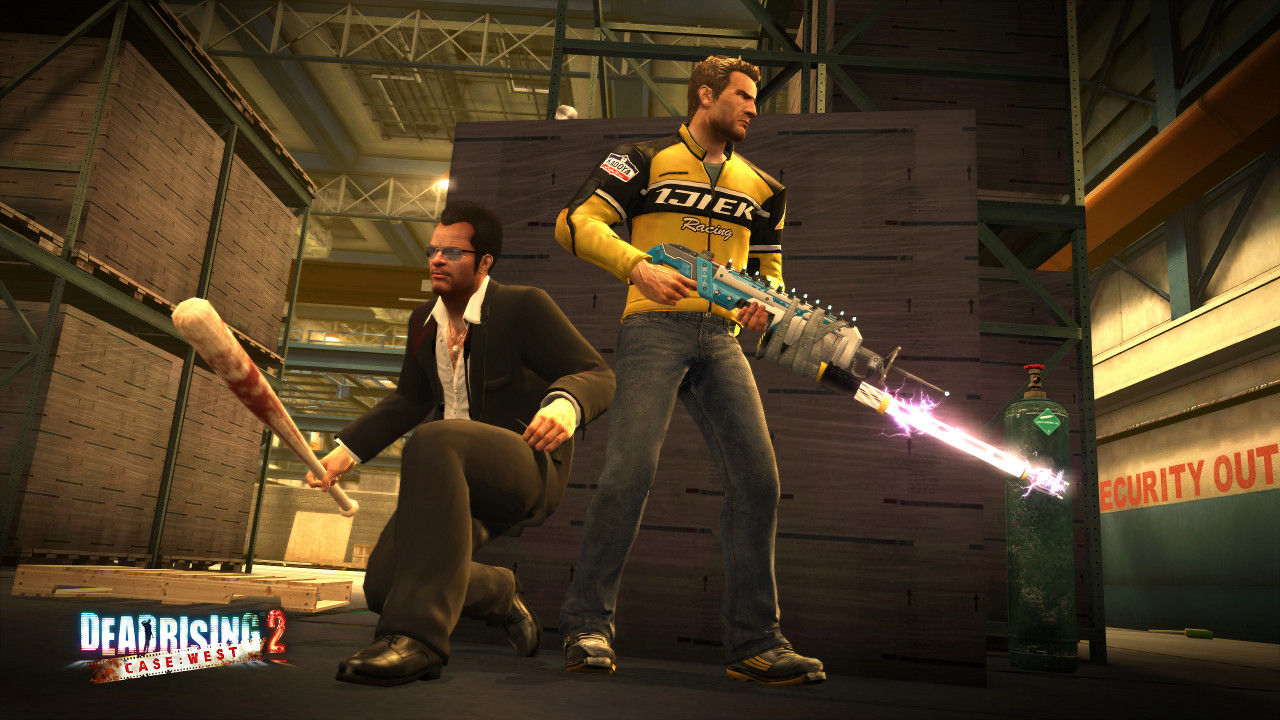 A beginning and an end

Not everyone was ready to invest in a second Dead Rising, which is part of the reason that Capcom went with a unique strategy of bookending its game with standalone downloadable chapters, both exclusive to Xbox 360.

Dead Rising 2: Case Zero focused purely on a 12-hour story, meant to introduce audiences to Chuck Greene and the new cast of Fortune City before the events of the second game. It's a mere taste of what the main game offers, only allowing Chuck to level up to 5 and offering a limited number of combo weapons. While users could unlock content for Dead Rising 2 and get some valuable backstory, it also served as a nice standalone story for anyone not ready to make the full commitment to Dead Rising 2.

Dead Rising 2: Case West offered up some fan service by bringing back Frank West and having him cross paths with Chuck. The duo investigate a facility out west, continuing to investigate the zombie outbreaks. While the game itself is unremarkable, aside from the only chance to play co-op as Chuck and Frank, it does continue the Dead Rising narrative and offers a very early glimpse into some of the events of the game's eventual third chapter.

The downloadable games are somewhat controversial, in that a sector of fans felt alienated by having to pony up $5 for Case Zero and $10 for Case West. It's an interesting model, though, simply because it offered up an option to anyone that was willing to skip the full retail release or wait for a price drop. 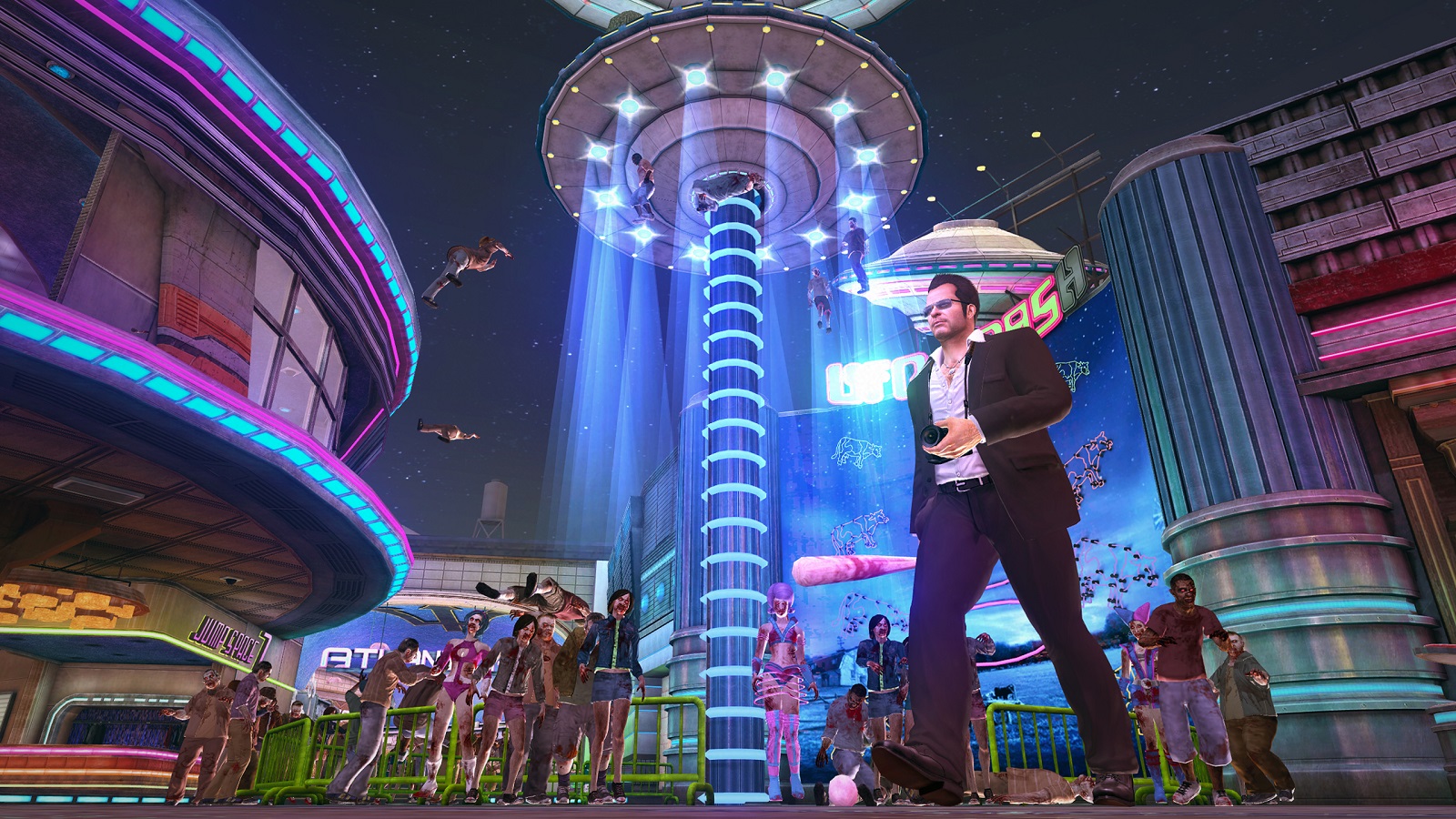 Even with Dead Rising 2 holding up solidly as its own tale and capably carrying the series narrative forward, there was still a large group of fans that wanted Frank West to be the guy that got to the bottom of Fortune City. A year after DR2's release, Capcom decided to cater to this crowd with Dead Rising 2: Off the Record, a non-canonical take on the Fortune City outbreak with the heroic West as the star.

Off the Record comes across as a more polished Dead Rising 2, feeling like an overall smoother experience. Combo Weapons remain in place, but there are a couple of additions that make OtR a bit of a novelty. The photography feature makes its return from the original game, while a Sandbox Mode also provided an opportunity to simply play around in the Fortune City world without the pressure objectives, while also earning some precious experience to level up Frank for the main story mode.

What's notable about the Dead Rising 2: Off the Record story is that it comes across as a very plausible "What if?" story. Character personalities are drastically different than the ones from DR2 and that includes some huge changes to the main characters. Of course, given that it's ultimately Frank's story, none of it feels wildly out-of-place and it presents itself as one of the many possible directions that Capcom could have gone with the story. At the end of the day, though, it's ultimately just Frank fan service.

To catch up with the rest of the Dead Rising series, including the shift to Los Perdidos, as well as the series cameos, and the rumored Hollywood film, come back later today for Part 2 of our Dead Rising timeline.