When the newest batch of iOS games release later tonight, there may be one game of interest to members of the Shacknews community. One of the games listed will be from among their fraternity. Trent Polack of developer Team Chaos, better known to Chatty as mittense, recently embarked on a pet project called Space Colors. After several months of solo work, Polack's game is ready to hit the App Store.

To learn more about Space Colors, Shacknews reached out to Polack to discuss the game that was months in the making and also learn some more about his relationship with Chatty. 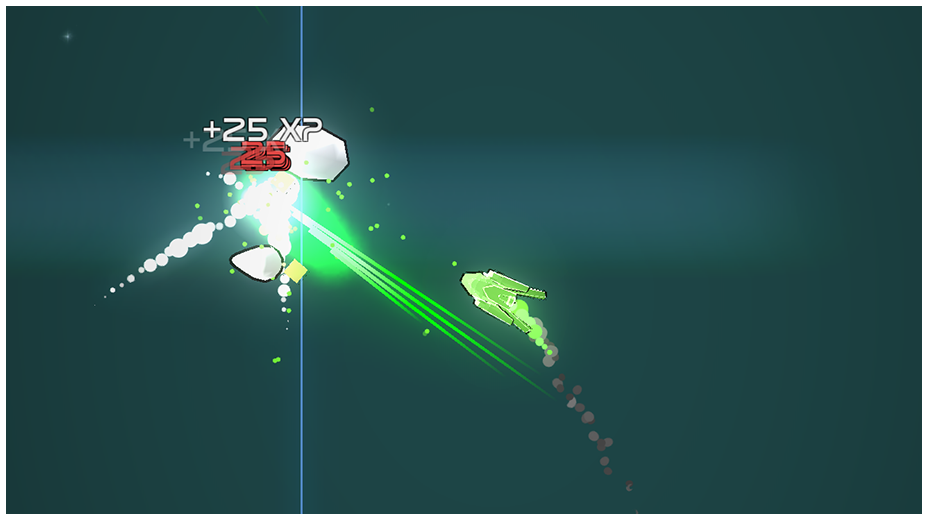 Shacknews: How would you describe Space Colors? What's the game about and how long has it been in the works?

Team Chaos Creative Director Trent Polack: I'd describe Space Colors as an action/adventure/shmup. I like to say it has roguelike elements as well, despite not being at all like Rogue in any obvious way. Basically, you start out at Level 1 every single time you play and you only have one life to make it as far into the game's procedurally-generated galaxy as you possibly can. If you die, you lose all of your power-ups and experience and are forced back to Level 1 in an entirely new galaxy.

The one exception to the whole "lose all progress" thing came from a game I absolutely adore: Rogue Legacy. I love the idea of progressively being able to build up your character from playthrough-to-playthrough even if the upgrades are incredibly incremental and take a long time to make any substantial gameplay difference. I didn't go nearly as far with this concept as Rogue Legacy did, but basically all of the credits that you accumulate in the game never disappear from playthrough-to-playthrough, so you can eventually use the credits to purchase new ships, permanent health upgrades, and better starting weapons.

One thing I wanted to maintain in Space Colors is a degree of accessibility and streamlining. I don't think mobile games have to be accessible or streamlined, but I do think that design worked best for Space Colors. I wanted a core game that was fun, and I didn't want to muck it up with inventory management, a combinatorial nightmare of upgrades, or complex mechanics because, at some point, you just start to run into the limitations of the touch interface. I wanted to keep the controls easy, simple, and powerful, and not require any crazy gestures or anything, and that desire motivated a lot of the simplicity of the game as a whole.

Basically, the goal of the game is just to make as many things explode in as glorious a manner as possible. I started it for the Space Cowboy Game Jam and worked on a still-publicly-available prototype for that game jam. And I just dug the style and feel of the game so much that I wanted to take an additional couple of months to polish the game, add the galaxy/upgrade metagame, and add some additional features. And, of that time, I'd say about a week was spent on just nailing the input response alone.

Shacknews: How did you come up with the game's art style and what tools did you use to help bring it to life?

Polack: Honestly, it wasn't too complicated. For the objects, all of them are basically just a bunch of rim-lit, completely untextured objects with a black outline. Then I applied a vignette filter to give the composition a bit of sense of the "unknown" (even though it doesn't really obscure gameplay), and then I went absolutely crazy with the bloom and lens flares. That's about all there is to the overall composition.

The explosions, though, were what I spent most of my time on perfecting the visual style for. I basically just completely hacked apart Unity's particle system to accomplish the dynamic, fluid, and over-the-top explosion style that I use throughout the game. My base influence was Chase Ace 2, which had some of the best explosions I've ever seen in any game, and I wanted to try to one-up the explosions in that game. There are three base explosions used in the game (small, medium, and large) and I think I spent more time revising each of these to feel completely unique, dynamic, and appropriately over-the-top than I did any other aspect of the game.

Shacknews: What's been your experience working with Unity? Has development been easier, compared to other engines?

Polack: I love Unity; I've been using it for about six years now, and the rapidity with which I can develop games is so far beyond what I've experienced with any other engine that it's really hard for me to even think about trying anything else. I have an Unreal Engine 4 license that I maintain monthly, but every time I load it up and start doing work with it, I just end up going back to Unity and accomplishing more in five minutes than an hour or two with UE4. A lot of that has to do with my familiarity with Unity's workflow but, especially since Unity added its Asset Store, there's so much more room for expansion of Unity's core feature-set that there just isn't much of a reason for me to even think about switching to another engine at the moment.

I think if I was going to switch to anything, it'd be some kind of HTML 5 solution, just for the ease of access for distributing the game. But I'm not quite ready to even try that yet.

Shacknews: How instrumental have your fellow Chatty posters been in regards to game development? Have they been able to assist at all, through feedback or otherwise?

Polack: When I was working on the prototype, Chatty posters were incredibly helpful in providing feedback about the game. I posted, I think, two or three separate builds of the game and each time got a lot of great feedback from the community that helped me balance the game, track down bugs, and just get general feedback that people other than me found the game fun (which is, by far, the hardest part about developing a game).

Shacknews: How long have you been a part of the Chatty community and what has made it a place that you like coming back to?

Polack: Man. I think I've been part of Shacknews since 2003 or 2004? I've been a bit more of a lurker as of late since becoming a Creative Director at my current company has resulted in way less downtime than I've had during college or at some other jobs.

I've always come back to Shacknews for a variety of reasons. Back in 2005-2007, I became good friends with Chris Faylor and, at the time, we'd spend most of our days just b*tching to each other about absurd things in the game industry. That was always good fun. Some time in 2007, I started getting into level design using the Unreal Tournament 3 engine and a fellow Shacker, kungfusquirrel, offered to help me and provide feedback on the level I was working on. His advice was invaluable and really helped me build out a bit of the portfolio that I was trying to build up to make the transition from Game Programmer to Game Designer. This eventually worked and, as it turns out, we ended up hiring that same guy to help us work on Starhawk at LightBox Interactive a few months later.

But, in general, I've always just found the Shacknews community to be one of the best gaming (and general) communities on the internet. The Shackmeets in Michigan and Texas that I've gone to have always been a lot of fun, and the community is interesting and filled with a diverse group of people. It's pretty literally one of the only sites where reading the comments isn't something you do to torture yourself.

Shacknews: You've part of a larger development team and you mentioned that you have other projects in the works. What else can we look forward to from Team Chaos and what's next on the docket?

Polack: We just launched Dragon Raiders a couple of weeks ago, which is a level-based runner aimed at a slightly younger crowd. We've got a game called Loot Raiders in soft launch in Canada right now which aims to provide the essential loot-gathering and min/maxing gameplay experience of an MMORPG/Diablo (the worldwide launch of the game isn't too far out). And we're just starting a project that I think will fill a pretty huge genre/gameplay gap in the iOS marketplace that I'm super, super excited about.

Look for Space Colors to release on the App Store alongside the other new releases of the week at 11PM EDT tonight.

Roughly 95% of US Apple users opted out of App Tracking in iOS 14.5