If you missed the first part of today's timeline, be sure to check it out here.

Earlier today, we began a look back at the history of Team Fortress 2 and how it's changed over the years. We've also looked at the ways in which its changed the first-person multiplayer shooter genre and video games, in general. And while most games would check out after the first couple of years on the market, Valve's shooter never waned. If anything, it became even more of a presence, further cementing itself as one of the most influential video games of this generation.

Valve officially brings Team Fortress 2 to Mac and, by extension, brings its Steam platform to Apple's OS. Mac users are now able to get into the class-based mayhem that PC users enjoyed since The Orange Box's arrival in 2007. Not only that, but they would all be allowed to play together.

The occasion would be celebrated with Mac users being given free in-game earbuds to place on their characters. It seemed like a harmless promotion, but little did anyone know that it would balloon into something much bigger and begin to feed the beast that is now TF2's economic system. Earbuds would soon hit trade servers with such outrageous prices that they would quickly become currency unto themselves. Rare items would no longer be measured in Refined Metal, but in "buds" instead.

Crafting had only proved to be a minor bandage to the growing problem of too many new hats and weapons, with fewer means to get the ones desired. With that in mind, Valve went ahead and addressed the problem... while also adding to it, at the same time.

The Mann-Conomy Update allowed users to officially purchase the item they were looking for outright through the use of the newly-introduced Steam Wallet. Are hundreds of hours of gameplay not enough to pick up that one specific hat? Simply buy it up front from the new Mann Co. Store. Indeed, this update introduced microtransactions for the first time and pioneered the controversial business model (most popular on mobile devices) as we know it today.

Valve certainly didn't help impulsive types with this update, because they also unleashed 65 new items. However, many of those items were created by the folks at Polycount, marking one of the first community contributions to the then-three-year-old game. It would pave the way for a much larger community initiative that Valve would kick off in a future update.

The Steam Wallet also proved to be a major addition for PC gamers, in general. This currency system is still in use to this day, allowing Steam users to store increments of money to purchase any game on Valve's service.

With almost four years under its belt, Valve took the next step in growing Team Fortress 2's user base. With TF2 now able to fully sustain itself, thanks to the Mann Co Store, there was no longer a need for an entry fee. So Team Fortress 2 went free-to-play.

For those that hadn't gotten into the shooter, it was a momentous occasion. It was an opportunity to jump into a beloved game with an established user base and join in the fun. Unfortunately, the transition wasn't entirely smooth.

A sector of TF2 players saw the move as a betrayal, seeing the influx of new players as invaders. While a portion of the fanbase voiced legitimate concerns about the influx of hackers, there was also a segment of players that greeted free-to-play users with outright nastiness, sometimes kicking them from games or throwing out other kinds of hostility. Some players were even demanding refunds. It was an ugly period and one that thankfully didn't last very long, as the loud voices were gradually squelched over time. Those concerned with hackers were also relieved to see Valve diligently dealing with cheaters through VAC bans.

The Polycount Pack that released a year earlier would only be the beginning for Valve's community outreach. As mentioned before, TF2's economy was now self-sustaining and its sales numbers were booming, thanks to the Mann-conomy. That allowed the developers to try a bold new initiative, one that would potentially allow Valve to freshen up their game while outsourcing some of their work.

Thus, Steam Workshop was born. Debuting in the Manniversary Update, Steam Workshop allowed TF2 users to submit their own ideas for weapons, hats, or other items. The best ones would be accepted and placed into the game, as well as the Mann Co. Store.

While some lucky users were able to see their creations in-game and claim some bragging rights (along with a few bucks), other creators were able to make a full-on living off of their work. In fact, Gabe Newell even stated that some users had earned as much as $500,000 from the Mann Co. Store's revenue sharing system. It was a banner day for modders and custom content creators.

Meanwhile, Steam Workshop remains a pivotal part of Valve's Steam service. Hundreds of Steam titles now utilize the service to open the door for modders and other content makers to create levels, game modes, and other bells and whistles for a number of existing games, like the The Elder Scrolls V: Skyrim and the Total War series.

As much fun as Team Fortress 2 has been as a game, it's just as widely-known for its one-of-a-kind cinematics and trailers. Even non-TF2 fans are familiar with the "Meet the" series of videos, which had been received with near universal praise. But all good things must come to an end, so the time soon came for Valve to release the final video in the "Meet the" series and the TF2 makers planned to go out with a major bang.

Meet the Pyro illustrated just how far the series had come since its humble class introductions, making it the perfect swansong. But Valve had one more parting gift to loyal viewers: the tools to make their own movie with Source Filmmaker. This tool would allow creators to make their own Source-based movies using the Team Fortress characters or anything else at the engine's disposal. Users could record into uncompressed AVI files, TGA files, and WAV files and insert choreography scenes and modified character movement. The results could be published directly to Steam or YouTube.

The result has been some truly glorious machinima films with the promise of many more to come, so long as there remains a spark of creativity in the gaming world.

As Team Fortress 2 neared its 5th anniversary, it appeared that Valve was ready to take a drastic step forward. While competitive multiplayer would continue at its usual pace, the developers decided to further emphasize the "Team" in "Team Fortress 2" by adding an all-new cooperative mode that would pit long-time rivals against a common threat: machines.

Mann vs. Machine took the Payload concept and extended into the realm of tower defense. Robotic versions of each of the classes would all swarm out in waves in an effort to push their bomb forward. The idea was to prepare for each wave and try like crazy to keep the robots from advancing. While different class bots would all act as different dopplegangers of the human classes, the game would occasionally toss in a monkey wrench in the form of larger "boss" bots, which would require a more coordinated attack to defeat.

With only six available player slots, teams needed to strategize and figure out which classes would make the trip and which would prove expendable. The meta-game was just as fascinating as the actual game and the eventual battles would prove to be joyously chaotic. I originally raved about Mann vs. Machine back when it first released and even got some good games in with several Chatty posters. You can check out one of those games in the video below. 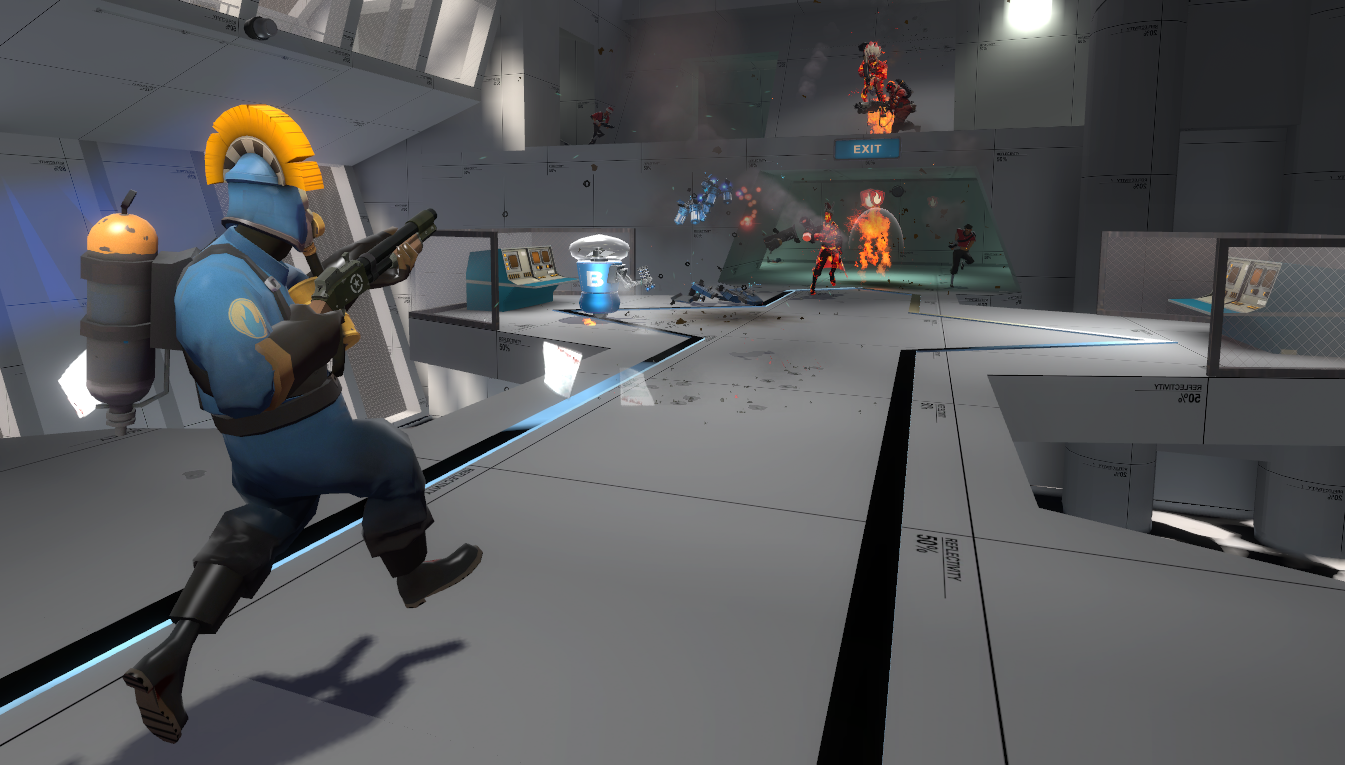 Believe it or not, there's still plenty of room for Team Fortress 2 to grow. Valve is still looking into some whole new game modes for their shooter, but they're not quite ready to go just yet. So earlier this month, the developer announced that they would open up special Early Access servers that would offer a look at the new content, while also giving users a chance to submit bug reports.

The result has been a new Robot Destruction mode, which tasks teams with taking out the opposite side's civilian robots. Not only that, but the whole thing takes place aboard a space station, taking the TF2 cast into the cosmos for the first time.

Even seven years later, Team Fortress 2 is still finding new horizons to explore. And if those past few years are any indication, Valve is far from finished.