Opinion: How far has Assassin's Creed come and how can it improve?

When the very first Assassin’s Creed game was released in 2007, I doubt anyone, even its developer Ubisoft, realized just how much the franchise would expand in the years to come. Since the first game’s release, the Assassin’s Creed series has produced six major console and PC titles with another slated for release this fall. That’s not counting spin-off games such as Assassin’s Creed III: Liberation, the Freedom Cry DLC for ACIV: Black Flag, which was later released as a standalone game, or the large myriad of other handheld and mobile games. Despite its obvious popularity, concerns of franchise fatigue and a lack of gameplay innovation have dogged the Assassin’s Creed series for quite some time, but what can Ubisoft do to reignite the spark of interest for fatigued critics without pushing core fans away? Let’s take a look at past games and see where the series made the right moves… or took a wrong turn.

Outdated out of the box

The first Assassin’s Creed game is likely remembered with some degree of fondness by more devoted Assassin’s Creed fans but I don’t think said fondness would hold up if they were to go back and play it today. At its time, the original Assassin’s Creed brought a lot of innovation to the table with a large open world; exploration that spanned multiple planes of elevation thanks to the game’s unique climbing/parkour system; counter-based combat that allowed players to take on multiple assailants with ease, and an engaging story that mixed real historic events with a fictional secret war between two powerful factions. However, other elements of the game weren’t quite as innovative 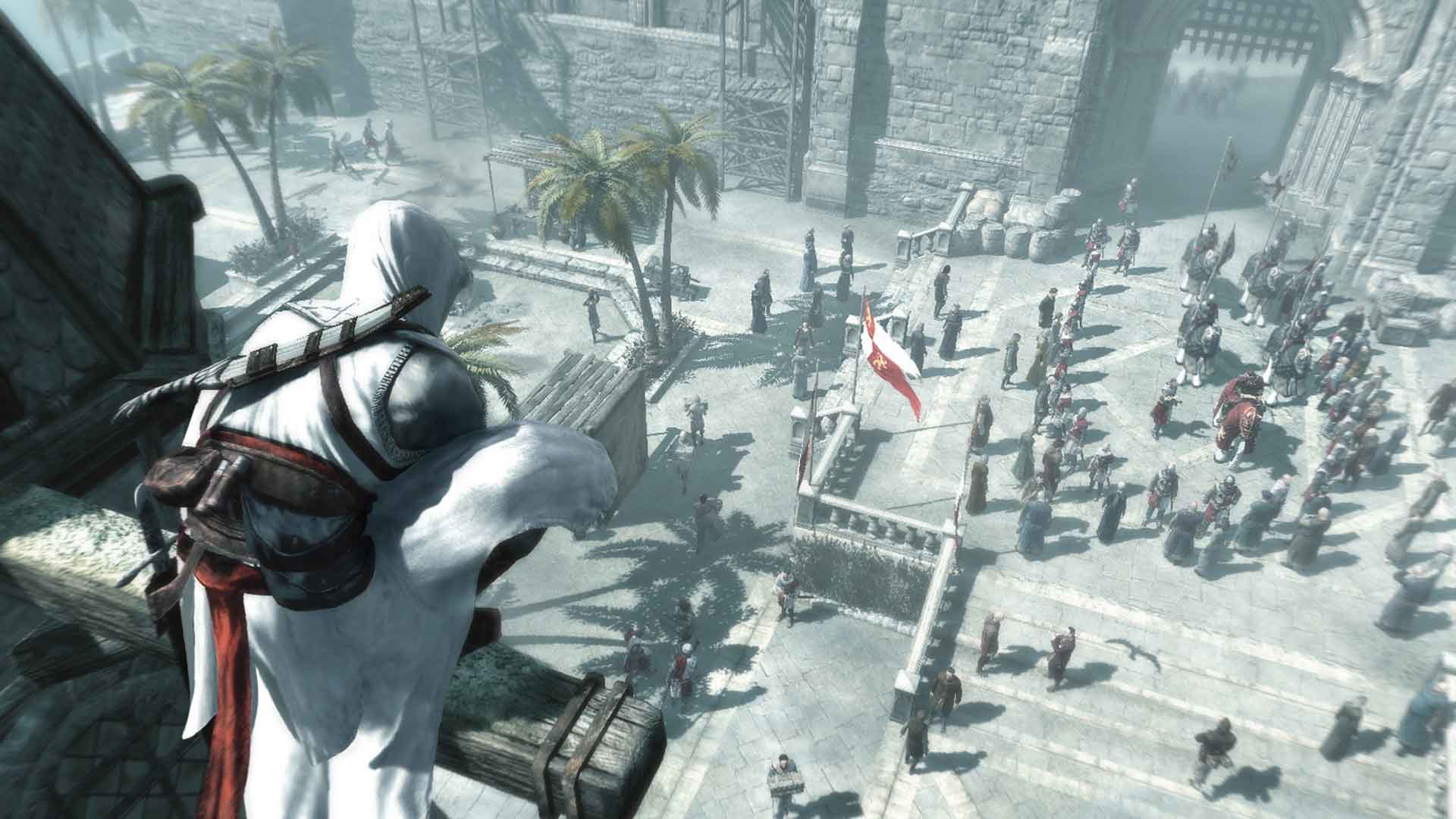 The first Assassin’s Creed game utilized a mechanic which was fairly popular at the time amongst developers but which I, as a gamer, was never a big fan of. During the game’s opening moments, players could experience the game as it was intended, with protagonist Altair equipped with all of his weapons and tools and utilizing all of his Assassin skills. Then, about twenty minutes in, the game took most of that power away. Using a plot device in which Altair had to “redeem his worth” to the Assassin’s Guild, players were forced to slowly reacquire most of Altair’s armaments. This forced them to play at a disadvantage for most of the game and never really gave them any meaningful rewards to look forward to.

Even this wouldn’t have been so bad if there weren’t important skills attached to most of the gear. I’m not sure how losing a piece of armor would suddenly rob a trained combatant of the ability to perform a counter, but such were the limits by which the game’s character progression was confined. This slow, staggered drip of rewards that weren’t really rewards wasn’t the game’s only shortcoming. Bland, boring side content, predictable enemy A.I., the inability to swim due to technical limitations, and an over-reliance on collectibles-hunting overshadowed much of the innovation that Assassin’s Creed brought to the table. Fortunately, Ubisoft made a stronger showing in subsequent entries.

Assassin’s Creed II, released two years later in 2009, was a major improvement over the first game and is regarded by many fans as the best of all of the core Assassin’s Creed titles. Featuring a new historic setting, a new protagonist, new and improved gameplay mechanics (finally I can swim!), and a continuation of the enigmatic Templars vs. Assassins story, Assassin’s Creed II managed to set a new and much higher benchmark for the series, both in terms of gameplay and story. Considering how popular Assassin’s Creed II ended up being, it’s little wonder that Ubisoft decided to stick with the Renaissance Italy setting and protagonist Ezio Auditore for two more games. 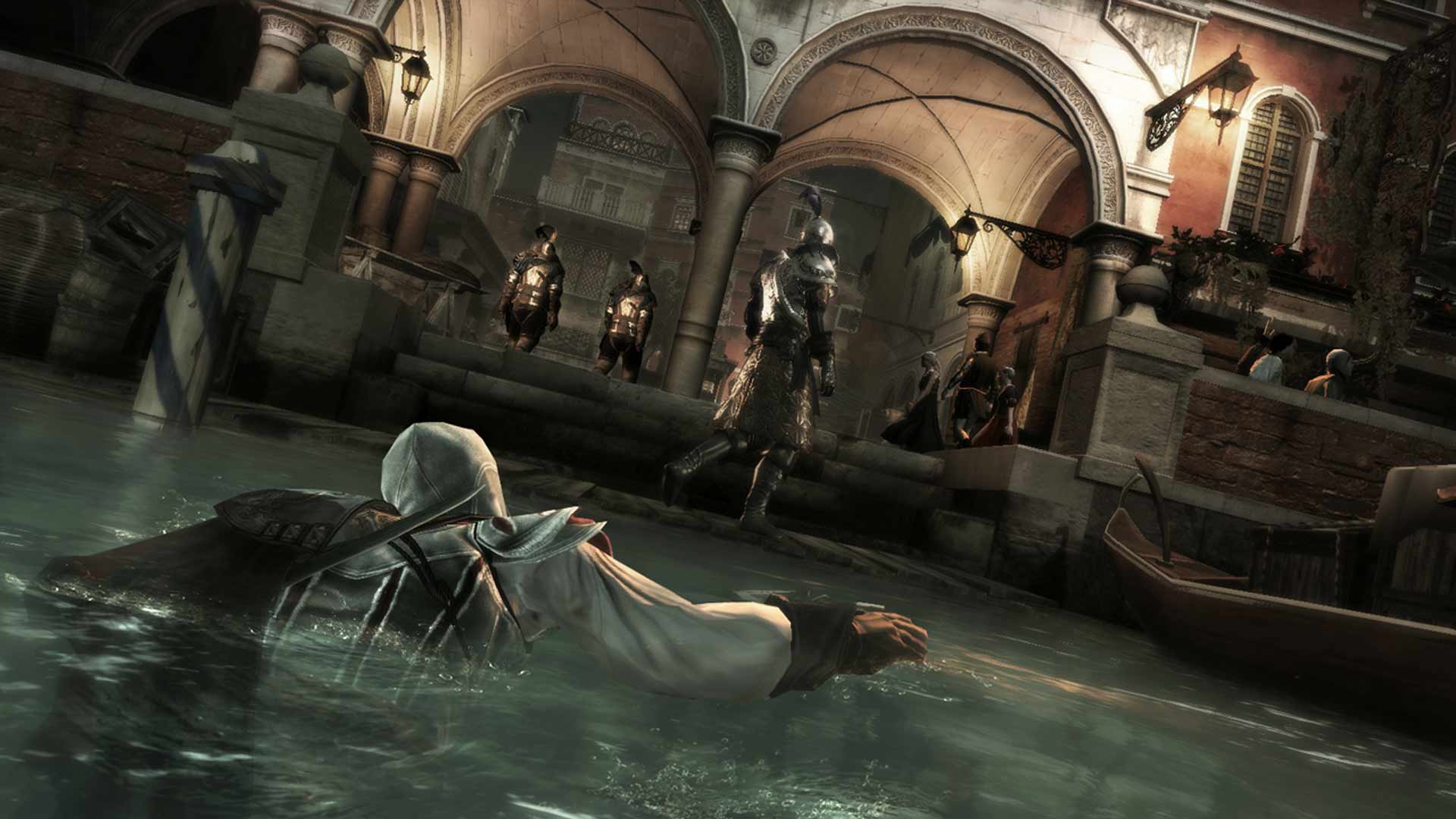 Assassin’s Creed: Brotherhood (2010) and Assassin’s Creed: Revelations (2011) didn’t really expand too much on core mechanics like combat or navigation (both of which were starting to show their age) but they did bring their own innovations such as the Recruitment system (first introduced in Brotherhood) which allows players to command a squad of NPC Assassins. An “Assassin’s Den Defense” mini-game was introduced in Revelations, in which players direct varying squads of Assassins against Templar forces from on high. Lastly, there was the inclusion of competitive multiplayer (included in both games) that featured its own story of players training as Templar recruits.

While the Recruitment system and multiplayer were both met with praise from fans, the poorly-implemented Assassin’s Den Defense mini-game combined with a lack of meaningful innovation in other gameplay areas (oh boy, more collectible hunting and frustrating chase/stealth sequences, yay….) left many who played Revelations feeling more fatigued and bored than excited. Ubisoft knew it had to really shake things up and that meant leaving Renaissance Italy behind and venturing into newer, more iconic frontiers.
Indians, Redcoats, and Pirates

Ramping the excitement back up was exactly what Ubisoft managed to do when it announced Assassin’s Creed III; an all new Assassin’s Creed adventure set during the tumultuous period of the American Revolutionary War. With Native American protagonist Conner Kenway at the helm, Assassin’s Creed III rushed into 2012 with a revamped offense-oriented combat system (to help quell complaints of the slower, more reactionary system of past games), a large world featuring both woodland and urban environments, the addition of cooperative multiplayer, and a story that featured many iconic American heroes such as Benjamin Franklin, Sam Adams, and George Washington. 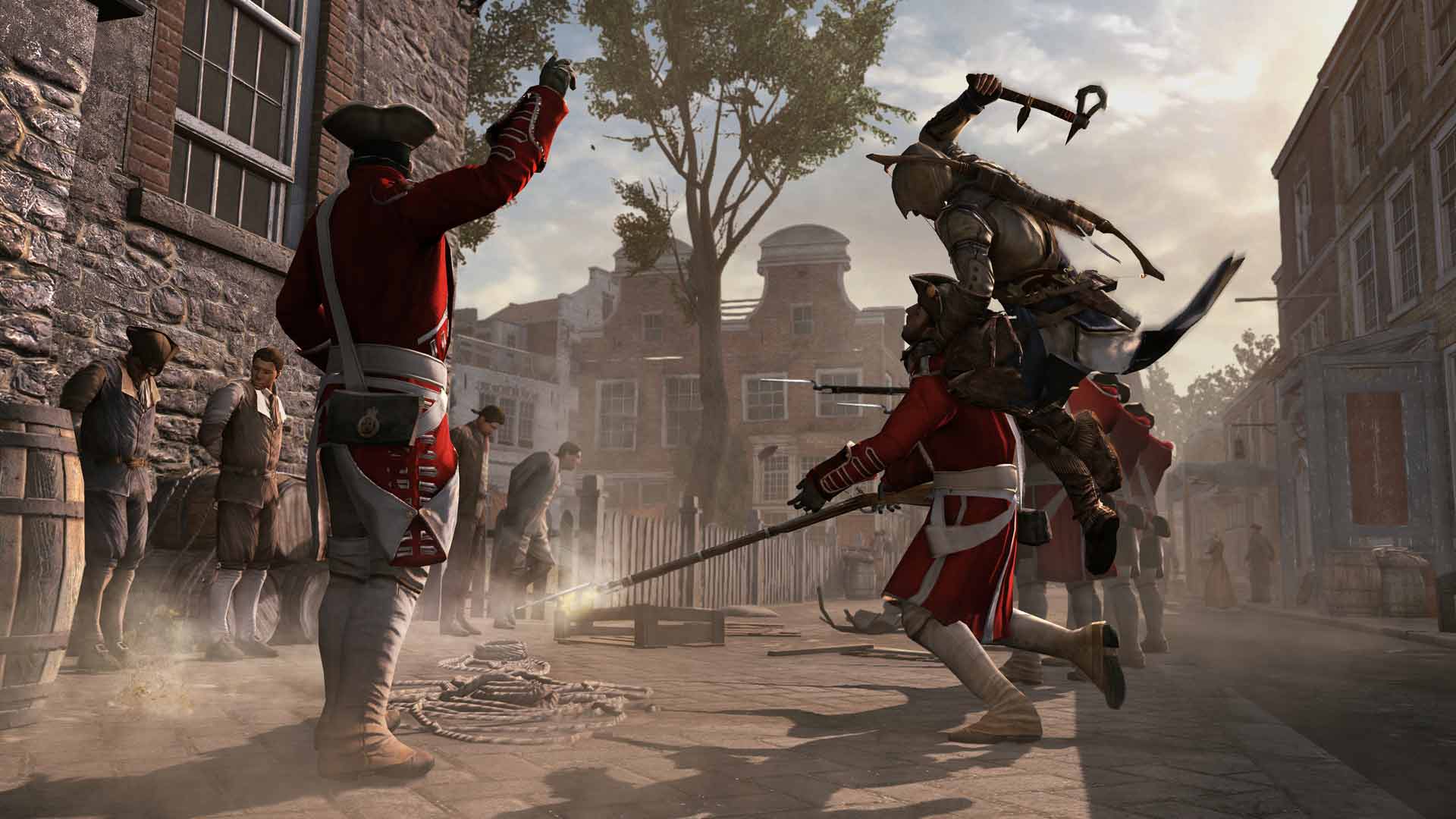 Sadly, Assassin’s Creed III also charged in with a fair amount of bugs and glitches and Connor’s more stoic, pensive demeanor combined with Ubisoft’s habit of “Forrest Gumping” him into virtually every major event of the war didn’t gel well with fans who had gotten used to Ezio’s charm and swagger. Despite its many innovations and iconic American Revolution setting, Assassin’s Creed III is often branded as the weakest entries in the franchise. The PlayStation Vita spin-off game, Assassin’s Creed III: Liberation, didn’t fare much better despite being set in its own original setting of French and Indian War-era New Orleans and featuring a playable female Assassin. While Assassin’s Creed III’s problems stemmed from a dearth of bugs and a boring protagonist, Liberation’s faults revolved around poor attempts at gameplay variety and an overall lack of polish. 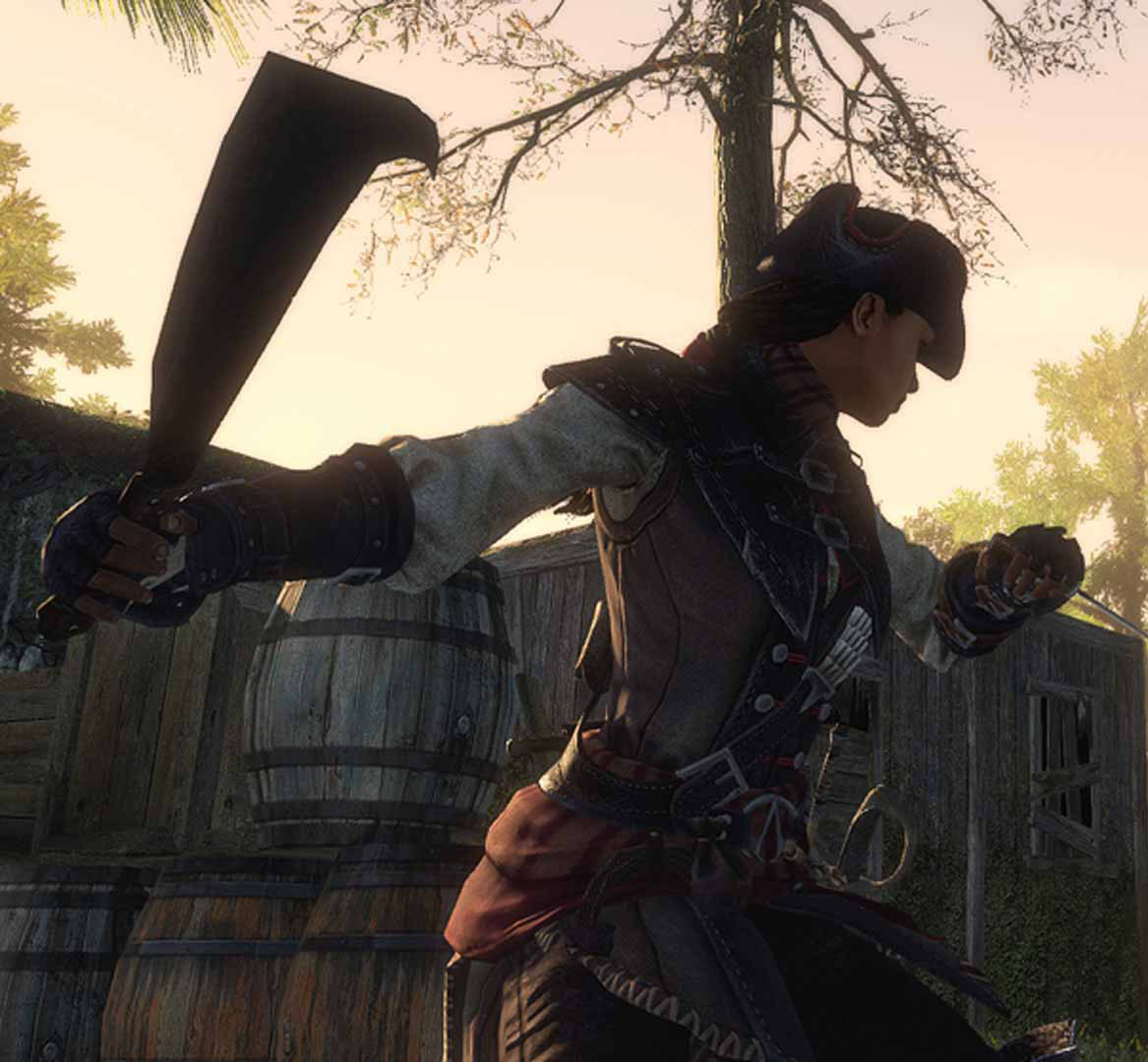 Assassin’s Creed IV: Black Flag, released in 2013, managed to wipe away some of the tarnish left over from Assassin’s Creed III mainly by building upon one of the more well-received elements from its predecessor; ship exploration and combat. Casting players into the role of Pirate-turned-Assassin Edward Kenway (Connor Kenway’s grandfather) during the Golden Age of Piracy, Black Flag featured the most expansive and open world of any Assassin’s Creed game to date, mainly because most of it was ocean water. Edward’s devil-may-care swashbuckling demeanor helped to draw Ezio fans back into the fold and new elements such as fleet-building, underwater exploration, revamped multiplayer, and a story rife with pirate legends such as Blackbeard and Charles Vane gave Black Flag an even stronger showing.

However, Black Flag also highlighted, in uncomfortable detail, the areas in which the series still remained stubbornly rooted in the past. Mandatory stealth sequences (a core staple of the series ever since the first game) popped up fairly frequently, but were poorly implemented, and they ended up being frustrating rather than engaging . Once the main story campaign was complete, there was little else to do other than go out and find the game’s staggering amount of collectibles, some of which did nothing else other than pad the player’s total game completion score. While Black Flag was the biggest effort by Ubisoft to push the series forward, it also offered the most glaring look at how backwards-thinking many of its gameplay elements remained. 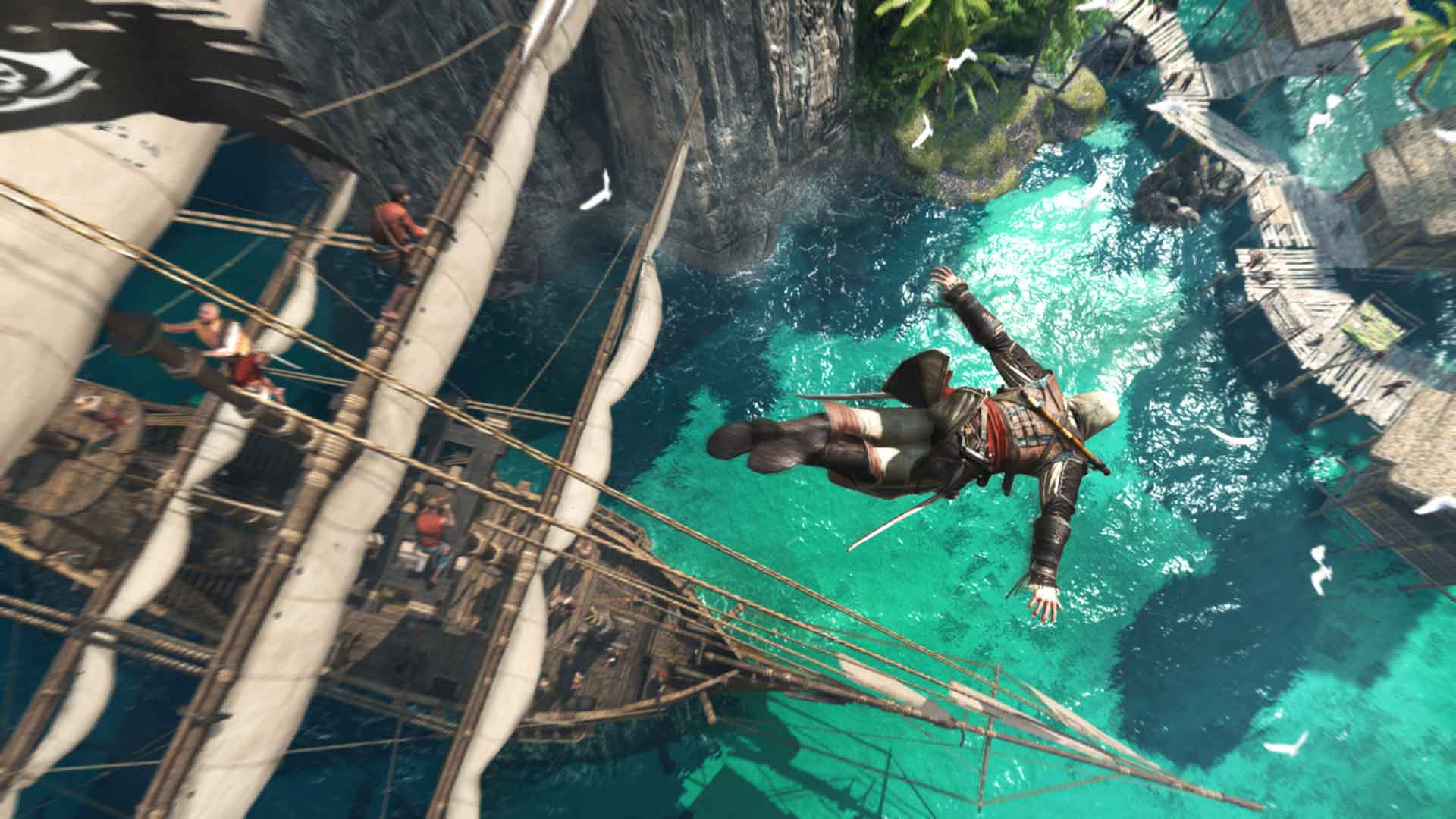 To Unity and beyond

With the upcoming release of Assassin’s Creed Unity, Ubisoft is once again attempting to push the envelope with a new story set during the French Revolution and the introduction cooperative gameplay. We’ll see if the game falls back into its old ways of mandatory stealth sequences and collectable-hunting that feels more monotonous now than fun. But I’m willing to hope the developer has heard the cries of its fans. I’m also curious to hear more about the rumored last-gen Assassin’s Creed game, codenamed Comet, that is also in the works and whether Ubisoft is planning to make some sort of last-gen/current-gen interconnected experience.

Ubisoft has already made a few significant stumbles by first confirming there would be no female Assassin options for Unity’s cooperative mode and then trying to justify the decision with a flimsy “it would take up too much additional time and resources” excuse. Still, I’m willing to give Unity a shot as long as it attempts to shake up not only the cooperative story multiplayer but also the more traditional standalone multiplayer experience. Hopefully the standard multiplayer won’t suffer from the same lack of diversity as the story multiplayer. I also wouldn’t be adverse to seeing a gameplay experience that focused more on traversal and combat and less on stealth and mindless collecting (unless said stealth was implemented in a non-frustrating manner and said collecting contributed something meaningful to the game’s narrative and wasn’t overdone).