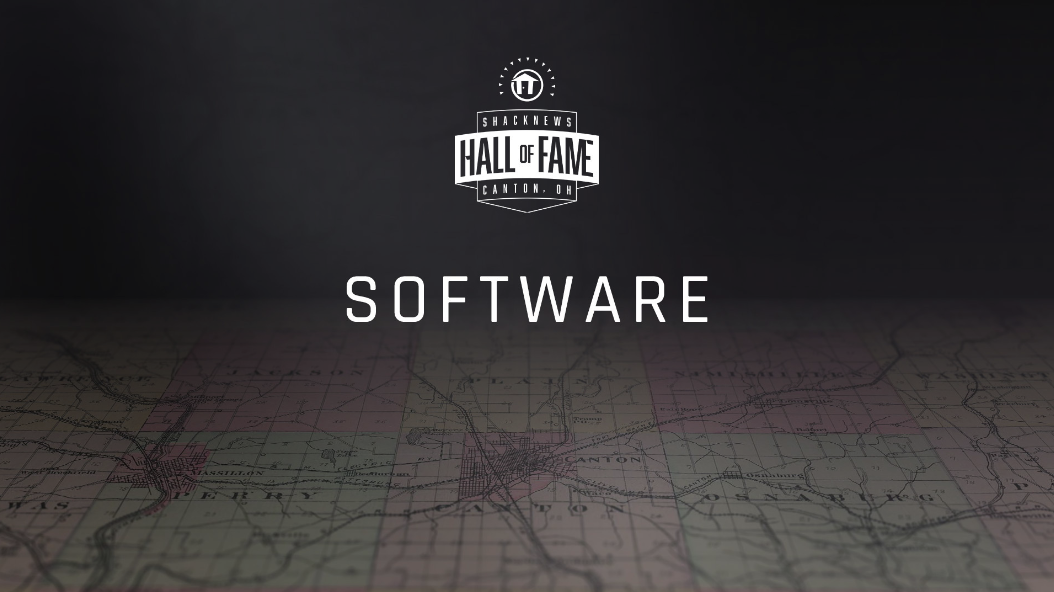 Welcome to the Software wing of the 2022 Shacknews Hall of Fame class. This category recognizes programs that contributed to gaming in some way, and in some cases, made it possible. Some entries include Further Reading sections where you'll find features and other stories that further illuminate this year's inductees.

When you're finished, use the Table of Contents links below to visit other areas of the Shacknews Hall of Fame Class of 2022.

AOL Instant Messenger, also known as AIM, was one of the most popular instant messaging services on offer in the late 90s and early 2000s. Originally launched back in May of 1997, AIM was offered as a free standalone app for Microsoft Windows and at one point boasted the largest share of the North American instant messaging market with 52 percent of the total reported in 2006.

During the height of the 2000s, AIM’s user base included a whopping 61+ million users. Competitors to AIM during the peak of its usage included the similarly popular apps Yahoo! Messenger (YIM) which launched in 1998 and MSN Messenger released in 1999.

Anyone growing up in the late 90s and early 2000s will undoubtedly remember AIM for features like being able to instantly send messages back and forth with friends on your Buddy List, and of course, being able to set custom Away messages.

While AOL Instant Messenger officially shut down in 2017, many of the features that apps like AIM helped popularize continue to be used to this day in other messenger services like Discord, Slack, Skype, Snapchat, and Facebook Messenger. Speaking of Facebook Messenger, Facebook parent company Meta now sits as the patent holder for AOL’s innovative Buddy List.

Shacknews would not exist without the Quake franchise, and the same can be said for GameSpy. Finding a Quake server was not easy in 1996, leading to the creation of websites like PlanetQuake and software like QSpy. Joe Powell, Tim Cook, and Jack Matthews formed Spy Software in 1996. QSpy was renamed to QuakeSpy and was even packaged with QuakeWorld. QuakeSpy ultimately pivoted the service to finding more game servers with a rebranding called GameSpy 3D.

GameSpy was merged into IGN in 2007, and was later shuttered entirely in 2013. The software’s trajectory of success and failure was truly tied to the early days of online gaming, and while many of the app’s best practices can be seen inside of plenty of multiplayer games today, We are honored that GameSpy’s influence on the game industry will continue to be felt at the Shacknews Hall of Fame until the end of time.

The Multiple Arcade Machine Emulator, better known by its acronym MAME can be a divisive piece of software. Created by Nicola Salmoria and launched in February of 1997. This emulation software was originally made to help preserve the Pac-Man family of games, but soon found purpose beyond that. Many fans of classic arcade games as well as archivists use MAME to play some of their favorite games on their PC or perhaps a homebrew arcade cabinet for a number of reasons including nostalgia or archival research. While many see it as a way to preserve software and arcade technology, others see MAME as nothing more than a tool for piracy, which is unfortunate. As we get further and further away from the origins of video games. Being able to archive titles from yesteryear will become more difficult and some true gems could be lost to the ages if not for MAME.

Educational games can be a hard sell. Kids are savvy and they know when you’re trying to disguise fun time with learning time. But some educational titles happen to be sincerely enjoyable, especially when you throw in a familiar face. Take for example Mario Teaches Typing. The game teaches players how to properly type as you might have gleaned from the name. It teaches proper hand placement and gets you used to the keyboard layout then challenges you to type sentences to save Mario, Luigi, and the Princess from peril with your mad typing skills. The clever mix of classic Mario gaming with a smart, easy to use interface has made this title a staple for decades. Heck, I myself learned how to type thanks to Mario Teaches Typing!

Players have been accustomed to the idea of the “console” war between rival manufacturers such as Sony, Nintendo, and Sega. But during the 1990s, Microsoft had two conflicting products devouring each other’s mindshare. Microsoft Works and Microsoft Office were suites comprising word processors, spreadsheets, and similar applications. Microsoft Office 1997, which gave users Word, Excel, Outlook, and PowerPoint, was arguably the most popular version of the software yet. The introduction of the Command Bar grouped similar options together, removing some of the guesswork from searching for formatting options and other necessities.

Every piece of software was polished, and to help users take advantage of all those shiny features, Microsoft gave them Clippy. While Clippy is known more as a meme today, the built-in assistant was (in)famous for helping users find what they needed during the ‘90s and 2000s. No longer did you have to browse a labyrinthine Help menu to search in vain for what you needed. Clippy was surprisingly adroit at deciphering your input and pointing you in the direction of the feature or menu for which you were searching.

And, since Shacknews is a video game website, we’d be remiss not to point out the pinball and flight sim games embedded as Easter eggs inside Word and Excel, respectively.

Nesticle—stylized NESticle to emphasize its emulation capability—was the first free emulator for Nintendo’s NES console. Emerging in 1997 and able to play NES ROMs under MS-DOS and Windows, Nesticle added support for games gradually until it rose to prominence as the NES emulator of choice in the 1990s.

The emulator owes its rise due to more than the ability to play classic video games. It pioneered recorded playthroughs, giving users a way to easily share speedrun attempts, and included tools to create custom hacks; in that way, it contributed to the popularity of ROM hacks, a subset of emulation that is thriving as of 2022.

Before the advent of Firefox and Chrome, Netscape Navigator was the most common alternative to Microsoft’s pernicious Internet Explorer Web browser. It was also the shot heard ‘round the business world. A faster and sleeker option than Internet Explorer, Navigator innovated Web usage. It was the first browser to display a webpage’s text and graphics as the page downloaded, rather than making users wait until every byte and pixel had been gathered. It was also the first to incorporate cookies, frames, and JavaScript.

Navigator was the dominant browser on PCs. In the early 2000s, it began a steep decline precipitated by Microsoft embedding Internet Explorer into Windows 98, making it the OS’s default Web-browsing tool, and entering into an agreement with Apple that saw the Mac company make Internet Explorer the default browser in Mac OS.

Although Navigator has been defunct since the late 2000s, we have it to thank for competing browsers such as Chrome and Firefox. The decline of Navigator was at the heart of Microsoft’s antitrust trial, during which the United States District Court for the District of Columbia ruled that Microsoft entrenching Internet Explorer in Windows was a monopolistic practice.

The MP3 craze that hit the Internet in the mid 1990s was truly a sight to behold. The wild west of FTP servers, IRC channels, and trading of music files was a disruptive precursor to the modern-day online music streaming and store experience. At the center of one of the most chaotic eras in the history of music sat Winamp. The PC music player was originally released in 1997, making this its first year of eligibility for induction into the Shacknews Hall of Fame. That year, Winamp version 1 was downloaded over 3 million times. By 2001, there were over 60 million Winamp users.

While the app’s popularity has dwindled in the recent decade, Winamp actually just released a version 5.9 update in September 2022. Winamp’s impact on the world of technology is still being felt to this day, and we are honored to have this iconic piece of software join us in Canton, Ohio to be showered with praise while whipping the llama’s ass for eternity.

WinZIP was released in 1991, and provided users with a way to compress and uncompress files at a time long before 1 terabyte solid state drives were even a pipe dream. The application really just applied a graphical user interface for the existing PKZIP DOS program. While the ZIP format had been around for a few years, WinZIP really introduced a whole new set of users to the wonders of file compression. We are honored to have the iconic apps join our Shacknews Hall of Fame’s illustrious group of legendary software programs.

It would not be right to induct WinZIP without WinRAR, so we are pleased to also announce the induction of WinRAR into the Shacknews Hall of Fame. The compression software was developed by Eugene Roshal and provided a similar GUI experience for the existing RAR and UNRAR DOS utilities. WinRAR had a robust set of formats that could be unpacked using the utility and also allowed users to create both RAR and ZIP files with the click of a button.

While there have been tons of interactions of both WinZIP and WinRAR since their 1990s debuts, Shacknews is honored to induct both applications to our Hall of Fame. As the saying goes, only the best file compression software ends up in Canton, Ohio.