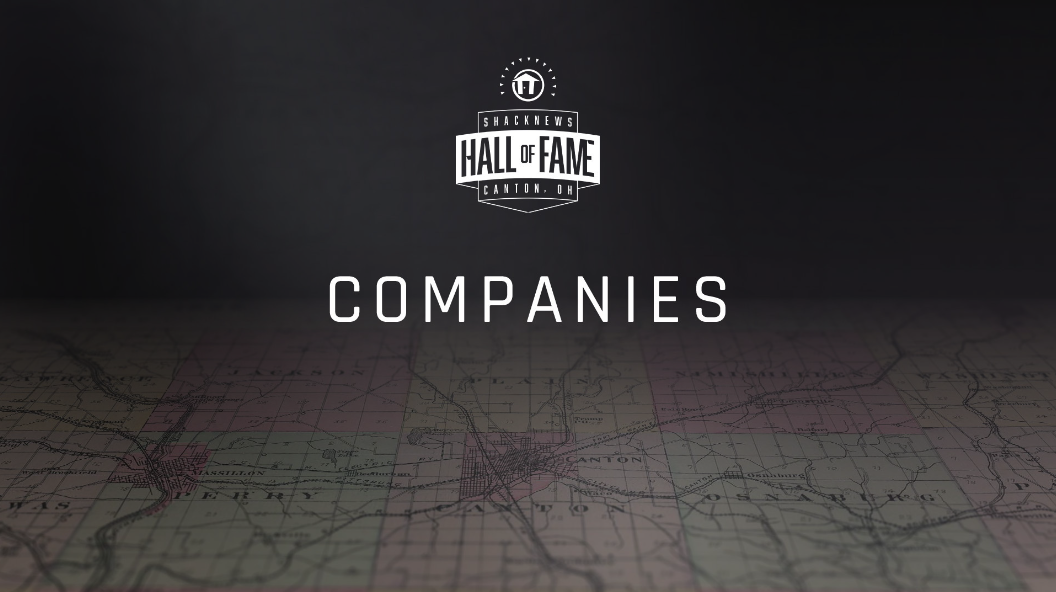 Welcome to the Companies wing of the Shacknews 2022 Hall of Fame class. This category celebrates the publishers, developers, and other entities that have influenced the direction of the industry and brought joy to millions of players.

When you're finished, use the Table of Contents at the bottom of the page to visit other areas of the Shacknews Hall of Fame Class of 2022.

Blockbuster LLC, formerly known as Blockbuster Video was a US-based that provided video game and home video rental. The services were offered mainly at retail shops, but the company did attempt to pivot to DVD-by-mail, video on demand, streaming, and even in movie theaters. At the peak of the company's existence in 2004, there were over 9,000 stores employing over 84,000 workers. The company filed for bankruptcy protection six years later, and the next decade saw a slow bleed of total store count. Some locations were acquired by Dish Network, but after a series of closures in 2019, only one Blockbuster remains in Bend, Oregon.

Blockbuster was a go-to location for video game fans. NES and SNES games cost a pretty penny in the 1990s and Blockbuster gave players and opportunity to try before they buy. In many cases, players would rush to beat games over the weekend, so as not to incur further rental costs. While the era of physical video rental stores has been made obsolete by the likes of Netflix and other streaming services, Blockbuster provided a crucial service to many gamers in the 1990s and early 2000s. The company's left an undeniable mark on video game history, and will now sit among the tremendously influential inductees here at the Shacknews Hall of Fame.

Headquartered in Iceland, CCP Games was founded in 1997 to make MMORPGs. Short for “Crowd Control Productions,” the company secured initial financing for EVE Online, the MMO that became its opus, by developing and publishing Hættuspil, Icelandic for “Danger Game,” selling over 10,000 copies.

Although CCP has developed other titles such as arcade shooter Gunjack and VR sports title Sparc, EVE Online is its most well-known title, and a major influence in the industry. Events in the persistent online world are driven almost entirely by the actions of its players, who engage in warfare, mining, and trading activities. In January 2014, players in the Russian alliances and the Clusterfuck Coalition entered into a large-scale battle that unfolded over 21 hours and involved over 7,000 player-characters. CCP’s world continues to thrive as of the company’s induction into the Shacknews Hall of Fame in 2022.

Founded in 1995 in the heart of Silicon Valley, eBay started inadvertently with an auction for a broken laser pointer on Pierre Omidyar’s personal website but it has gone on to be most people’s go-to place for online auctions. Trying to find a rare comic book? Collect antiques? Trying to sell off some of your old junk? eBay is probably where you’re looking to do all of those things. They’re also the reason we have PayPal (although eBay no longer owns the company.) Heck, Weird Al even did a parody song about buying stuff on eBay!

If you collect older video game hardware, software, or memorabilia you’ve probably used them as a reference as well, or perhaps won an auction for that rare gem missing from your collection. It’s undeniable that eBay changed the digital landscape of online auctioning and collecting and helped usher in the concept of shopping on the internet.

Before GameStop subsumed every other major gaming retailer, FuncoLand stood as a bastion of excellent deals on trade-ins and purchases. The company’s catalog, kept at the front counter and treated with the reverence of a lost Shakespeare manuscript, listed trade-in and purchase values for every game dating back to Atari 2600 and NES cartridges. Whereas GameStop boxed up older media and stored it in warehouses, FuncoLand’s shelves held copies of nearly every game listed in its vaunted catalog. The atmosphere was loose and carefree, the clerks willing to talk to customers about games without spouting programmed lines about membership cards and pre-orders.

At its height, FuncoLand set a single-day sales record on the Sega Dreamcast’s 9/9/99 release and operated over 400 stores across the United States. Barnes & Noble acquired the chain in 2000 and merged FuncoLand with Babbage’s to form GameStop.

NetEase is a Chinese Internet company that was founded in 1997, but has expanded beyond providing news and search services into a force in the video game industry. Present day NetEase owns Suda51’s Grasshopper Manufacture, GungHo Online Entertainment, and Quantic Dream. The company opened its first US studio in Austin, Texas in 2022.

NetEase has partnered with many devs from across the globe to bring games to the Chinese market over the years, and the company remains a force in console, PC, and mobile gaming. We are honored to induct the company in its first year of eligibility. Welcome to Canton, NetEase.

Following the studio’s strong start in the late 90s, Activision went on to acquire Neversoft in October of 1999 with the developer going on to work on other assorted Tony Hawk’s Pro Skater titles and sequels like Tony Hawk’s Underground, as well as a Spider-Man game in 2000 and a Western-themed action-adventure called Gun in 2005.

The studio’s acquisition by Activision and work on Call of Duty eventually led to it being merged into another Call of Duty development studio, Infinity Ward, in 2014. While the studio no longer exists as Neversoft, its legacy lives on in previously mentioned past entries including the Tony Hawk’s Pro Skater series, and in Call of Duty including recent Infinity Ward-developed titles, Call of Duty: Warzone and Call of Duty: Modern Warfare II.

While Sucker Punch may be more well known for their modern franchises like inFAMOUS and Ghost of Tsushima now, they’ve actually been making quality games since 1997. Their first title, a platformer where you played a robot with a unicycle for legs was aptly titled Rocket: Robot on Wheels. It was critically lauded, but failed to get traction. Their next title, however, would put them on the map.

For Sly Cooper and the Thievius Raccoonus the team at Sucker Punch partnered with Sony for publishing. This action platformer starring a sneaky raccoon and his band of thieves had a Saturday morning cartoon meets crime noir flair to it Sucker Punch and Sony would partner up for two more Sly Cooper titles before heading on to make their open-world smash hit inFAMOUS. After the launch of inFAMOUS 2, Sony decided to put a ring on it and purchased Sucker Punch outright, bringing them into the company’s fold. Their latest title at the time of induction is Ghost of Tsushima an open world samurai epic that has tinges of Kurosawa’s classic films mixed with stealth action and an impressive combat system. Sucker Punch just seems to get better with age and we can’t wait to see what the team comes up with in their next 25 years and beyond.

Tiger Electronics are probably associated the most with their line of LCD hand–held games from the 80s and 90s. They had a number of very simple sports titles along with a plethora of licensed video game and film/TV franchises that they turned into an affordable hand-held. Were they basic and somewhat rudimentary with their visually limited LCD screens and inexpensive plastic controls? Sure, but they’d keep a kid entertained through at least a few car rides.

However, their line of LCD games wasn’t the only thing Tiger had up its sleeve. They’ve been responsible for a number of popular electronic toys over the years. Ever heard of the Bop-It or the Skip-It? Those were both Tiger. The TalkBoy from Home Alone 2 was them also. Probably their most notable contribution to the lexicon of toy makers though was the Furby. These odd, interactive, little beaked furballs were the must-have holiday toy the year they came out and have somehow managed to stick around after all these years as a fairly popular brand. Tiger Electronics was purchased by Hasbro in the late 90s and the brand is still around today. Just recently a number of their classic hand-held LCD games were released for a new generation to enjoy.

Contrary to popular belief, Westwood did not invent the real-time strategy genre with Dune II. The game’s developers did something better: They codified the RTS by culling elements from games such as Herzog Zwei (a strategy game for the Sega Genesis/Mega Drive) and Populous, and pieces of the Mac’s user interface. Brett Sperry, who co-founded Westwood with Louis Castle, coined “real-time strategy” as a marketing term to give gaming journalists and fans something to latch on to when the game released, much in the same way that Resident Evil director Shinji Mikami coined “survival horror”— the genre existed before Capcom’s classic, but the term codified its constituent parts.

Before Dune II, Westwood was known for 1991’s Eye of the Beholder, a computer RPG buoyed by the Dungeons & Dragons License. But it was Dune II that propelled the Las Vegas, Nevada-based developer to superstar status. Blizzard Entertainment’s co-founders have cited Westwood as a major influence on the WarCraft franchise; Westwood responded with Command & Conquer, arguably the studio’s most well-known franchise and a popular alternative to Blizzard’s sword-and-sorcery-themed RTS. Virgin Games acquired Westwood in 1992, only for Virgin Interactive to sell the studio to Electronic Arts in 1998.

In the early 1990s, PC developers were chasing the success of Doom creator id Software and publisher Apogee, whose shareware model was the id crew’s springboard to gaming notoriety. “Doom clones” flooded MS-DOS and competed for space in shareware catalogs and on store shelves. Bungie was the exception. Targeting Macintosh computers, the Marathon series of first-person shooters invited Mac players into a first-person world that emphasized story as much as action.

After Marathon, Bungie went on to develop the Myth series of strategy games and Oni, a third-person action game. Those titles caught the attention of Microsoft and triggered a series of events that positioned Halo as the original Xbox’s first system seller and gave Bungie the pedigree its team needed to create Destiny and Destiny 2, comprising one of the most successful gaming universes in the industry.

NeXT was founded in 1986 by Steve Jobs after his unceremonious exit from Apple Computer. The technology entrepreneur set out to finish what he started with the Macintosh line of computers. NeXT computers would feature innovations in graphical user interfaces, and plenty of networked computing features. Id Software’s John Carmack even experimented with the NeXT computers during development of early titles like Doom.

After two failed attempts at making computer products, NeXT pivoted to being a software company. The resulting NeXTSTEP operating system would end up laying the groundwork for the future of the Macintosh, when Apple acquired NeXT in 1996. Steve Jobs’ return to Apple lead to the greatest corporate turnaround of all-time, and many of the innovations at NeXT can still be seen today on iPhone, iPad, and the Mac line of computers.

US Robotics produced many of the computer modems of the 1990s era. Before cable Internet was widely available, users needed to plug a modem into their phone line to access the early Internet portals like AOL and Prodigy. Many Internet enthusiasts in the 90s owned a version of the Sporster low-end modem. The company’s High-Speed Transfer technology was featured in the 14.4 kbps, 16.8 kbps, 21 kbps, and many more models.

Modern-day US Robotics has been acquired, spun off, and reacquired over the years since its founding in 1976, and if you never heard one of these modems connect to the Internet via a phone line, you are missing out. We are honored to induct the company into the Shacknews Hall of Fame in its second year of eligibility.

Explore the Shacknews Hall of Fame Class of 2022 using the navigational menus at the bottom of each page. Share your memories and other thoughts on our inductees by leaving a comment in the Shacknews Chatty.