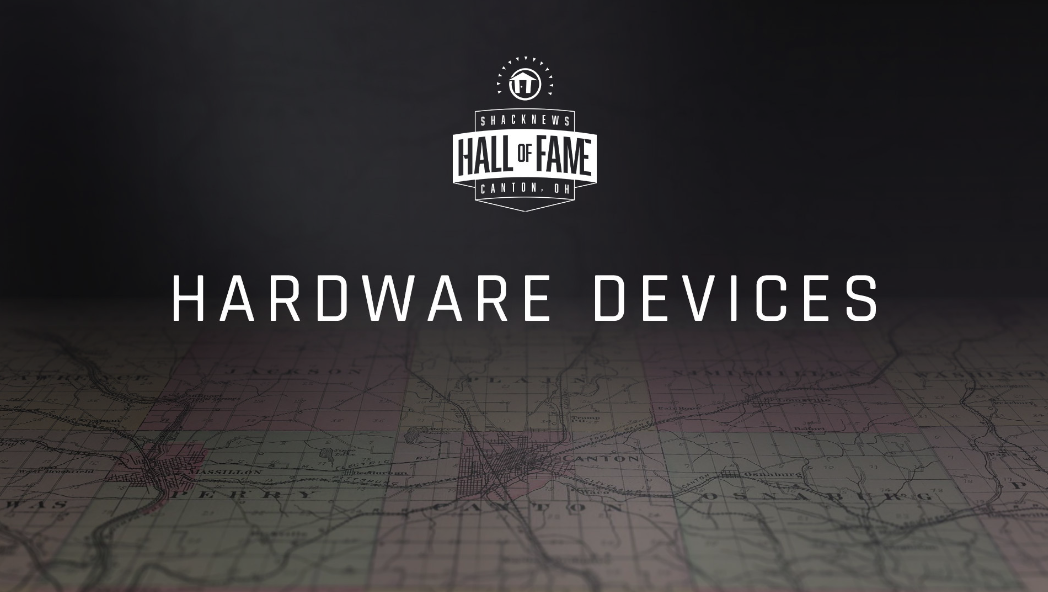 Welcome to the Hardware Devices wing of the 2022 Shacknews Hall of Fame class. This category celebrates platforms, computers, and other devices that have influenced the course of video games.

When you're finished, use the Table of Contents links below to visit other areas of the Shacknews Hall of Fame Class of 2022.

The mid 90s saw the explosion of MP3 technologies, and recordable CDs helped the proliferation of music sharing. Who doesn’t remember the first time they installed a Plextor CD recorder in their PC tower? The advent of re-recordable CDs lead to CDRWs being released and ultimately all of the technology still exists in DVD and Blu-ray burners. Sony, Zen Technology, and Plextor were in a true arms race in the 1990s and early 2000s. Better buffering, RPMs, and data interfaces were also huge drivers of the competition and innovation in the space.

Some hardware devices are forgotten over time, but Shacknews will never forget just how truly disruptive the advent of CD burners was for personal computer enthusiasts, the video game industry, and the future of music.

Debuting in 1997, the Rumble Pak was an optional peripheral for the Nintendo 64 controller that added force feedback to supported games. Its uses were varied and nuanced, from near-constant quivering in fighting games such as Mortal Kombat 4 and Super Smash Bros. to subtle vibrations that triggered when you drew near secret areas in The Legend of Zelda: Ocarina of Time.

Haptic feedback is widespread in 2022, as evidenced by its usage in the Xbox Series X and PlayStation 5 controllers. That ubiquity traces back to the popularization of force feedback by Nintendo and the Rumble Pak.

Nintendo has been accused of trailing behind Sony, Microsoft, and even Sega in the arena of online gaming. That was true in the 2000s and beyond, but Nintendo was one of the first to dip its toes in Internet-enabled video games by way of the Satellaview. Developed for the Super Famicom, the Satellaview was a satellite modem peripheral through which players could download games and other media such as magazines. Although the peripheral was never released in the U.S., it received support from heavy hitters in Japan such as Squaresoft, Capcom, and Konami, among others.

The Satellaview received a strong library of games during its years of support. BS Zelda (“BS” short for “broadcast satellite) was a 16-bit remake of the original NES game, bringing the graphics and audio in line with Zelda: A Link to the Past. Some games were only available for a limited time, a practice Nintendo has repeated in years since with titles such as Super Mario Bros. 99 and the exclusivity window of Super Mario 3D All-Stars.

New, more advanced consoles such as the Sega Saturn and Sony PlayStation put a dent in Satellaview’s adoption, but the satellite modem peripheral remains an example of Nintendo’s willingness to experiment with technology.

In a lot of ways the Super Game Boy foreshadowed Nintendo’s hybrid hand-held/dockable console the Switch. The device allowed you to insert just about any original Game Boy game you wanted to and make it playable on the Super Nintendo. It would even add color to them in many cases and several games had augmentations when using the Super Game Boy such as enhanced audio or the ability to play multiplayer games on one screen as opposed to connecting two hand-held devices. Games that can be played on the go or docked on the go? It feels like Nintendo may have been ahead of its time with the Super Game Boy.

If you’re ever wondering what the embodiment of the Japanese term “Kawaii” is, just check out a Tamagotchi. These tiny, egg-shaped digital pets hit the scene in the US in 1997, but they had become a massive trend in Japan before then. The concept is simple enough: You hatch your pixelated pet then feed it, clean it and keep it happy the same way you would any other pet. Only just hitting a few buttons is much easier than raising the real thing without the dire consequences that could come from owning an actual pet. Even so, your Tamagotchi could still die if you weren’t around to attend to it, much to many a teacher’s chagrin. Though the Tamagotchi may not be the hot new thing at this, the toy has remained popular over the years and now comes in a few different models as well as licensed versions, such as Hello Kitty, Evangelion and Star Wars R2-D2 pets. As of March 2021, there have been 83 million of these tiny toys sold.

While PC gamers were dialing into modems to compete in games of Doom, WarCraft II, and Command & Conquer during the mid-‘90s, consoles players seemed marooned on console islands with no way to connect to anyone beyond their living rooms. The XBAND changed that perception for the Super Nintendo and Sega Genesis. By inserting the cartridge-shaped modem into their consoles and slotting cartridges into the tops of modems, players could subscribe to the XBAND service and compete online in popular titles such as NBA Jam, Mortal Kombat II, and Super Mario Kart.

XBAND exhibited some of the features that contemporary services such as Xbox Live popularized. Players had friend lists, access to email, player profiles, and avatars. There was even a website where players could check their statistics as well as those of other players.

At its zenith, XBAND attracted over 15,000 subscribers. That may seem paltry relative to how many players engage in co-op and competitive online games in 2022, but for the mid-‘90s, when Internet connectivity on consoles was barely in extant, XBAND was a trendsetter.

Explore the Shacknews Hall of Fame Class of 2022 using the navigational menus at the bottom of each page. Share your memories and other thoughts on our inductees by leaving a comment in the Shacknews Chatty.