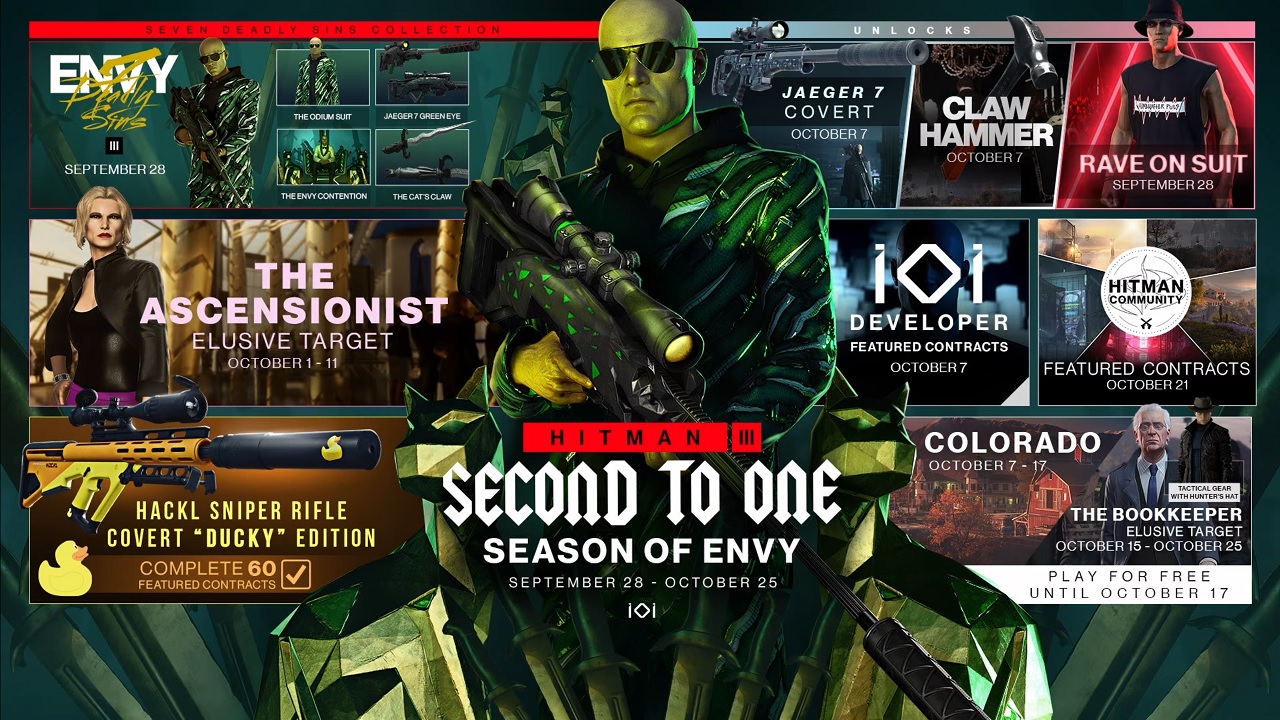 It’s another month and the Hitman 3 Seven Deadly Sins Envy DLC has launched, which means it’s about time for another roadmap from IO Interacive. Sure enough, that roadmap is here, bringing us a new Dubai Elusive Target, gear unlocks, Featured Contracts, and plenty more. We’ve got all of the details right here for you, as well as the dates you’ll be able to engage in the Season of Envy’s content.

IO Interactive released the Season of Envy roadmap with a new trailer on the Hitman YouTube channel on September 28, 2021. This month has a lovely number of unlocks starting today. For one, the Hackl Sniper Rifle Covert “Ducky” Edition (just as silly as it sounds) is yours to claim if you finish 60 Featured Contracts. Meanwhile, the Jaeger 7 Covert and Claw Hammer will be unlockable in new challenges on October 7. Perhaps most importantly, there’s an all-new featured contract this month. The Ascentionist is a con artist lurking in lavish Dubai. She has killed and lied her way to the top and ruffled more than a few feathers along the way. From October 1 to October 11, it’s time for you to pluck hers.

In addition to the new Elusive Target, there will be a returning Elusive Target alongside the Hitman 3 content this coming month. From October 7 to October 17, players can visit the Colorado location from Hitman 2016 with the Hitman Free Starter Pack and from October 15 to October 25, the Bookkeeper Elusive Target will be in play there. Finally, on October 7, IO Interactive will release its own Featured Contracts and share a new collection of community Featured Contracts on October 21.

The Hitman 3 Seven Deadly Sins Envy DLC is already available as of today. Whether you want to go after the paid DLC or wait for much of the free content through this coming month, Hitman 3 has plenty to offer through October. Stay tuned for more details on that content and more from Hitman right here at Shacknews.