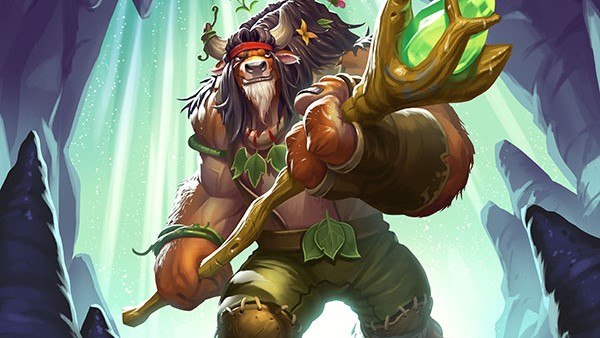 This coming Thursday will introduce some big changes to Hearthstone with the introduction of the Wailing Caverns mini-set. However, that won't be all that players should expect to see. Hearthstone Battlegrounds is getting some major additions, while Standard and Wild will see some nerfs to a few Paladin and Shaman cards.

Hearthstone Battlegrounds has had some fun with Quilboar over the past few weeks. Quilboars will now be subject to the same rotation as every other tribe starting on Thursday. On top of that, Maiev Shadowsong is stepping away from the hero rotation for the time being and will be replaced by two new entrants: The lovable oaf, Guff Runetotem, and the fearsome new Murloc fighter, Mutanus the Devourer. Guff's Hero Power is the 1-Cost Natural Balance, which gives a friendly minion of each Tavern Tier +2/+1. Mutanus' Hero Power looks significantly more broken, as Devour will sell a minion and pour its stats into another friendly minion. Did I mention Devour costs nothing and gives the player an extra Gold?

In terms of minions, the Siegebreaker is going away. He'll be replaced by the new Battlegrounds-exclusive Demon, Hexruin Marauder. He'll gain +3/+3 at the end of every turn, but only if you have six or fewer minions at the end of your turn.

Going back to Standard play, three cards are getting some adjustments and it sounds like bad news for Paladin players. Here are the changes coming this Thursday:

The Arena season will change and feature the Core set, along with the following sets:

Are you more of a solo player? Boy, is June the month for you! Three different batches of single-player content are coming this month. The Book of Mercenaries: Xyrella will be playable with Thursday's patch. The Book of Mercenaries: Guff will be available on Tuesday, June 15. A week later, the Book of Heroes: Malfurion will playable. Completing Xyrella's story will reward a Priest pack, while finishing Guff and Malfurion's books will reward one Druid pack each.

Of course, this update features a slew of bug fixes. Here they are, according to the Hearthstone website:

Hearthstone's 20.4 patch will be deployed on Thursday, June 3. That'll be the same day that the Wailing Caverns mini-set will be available for purchase. Brush up on our guide from earlier today to see all 35 cards.