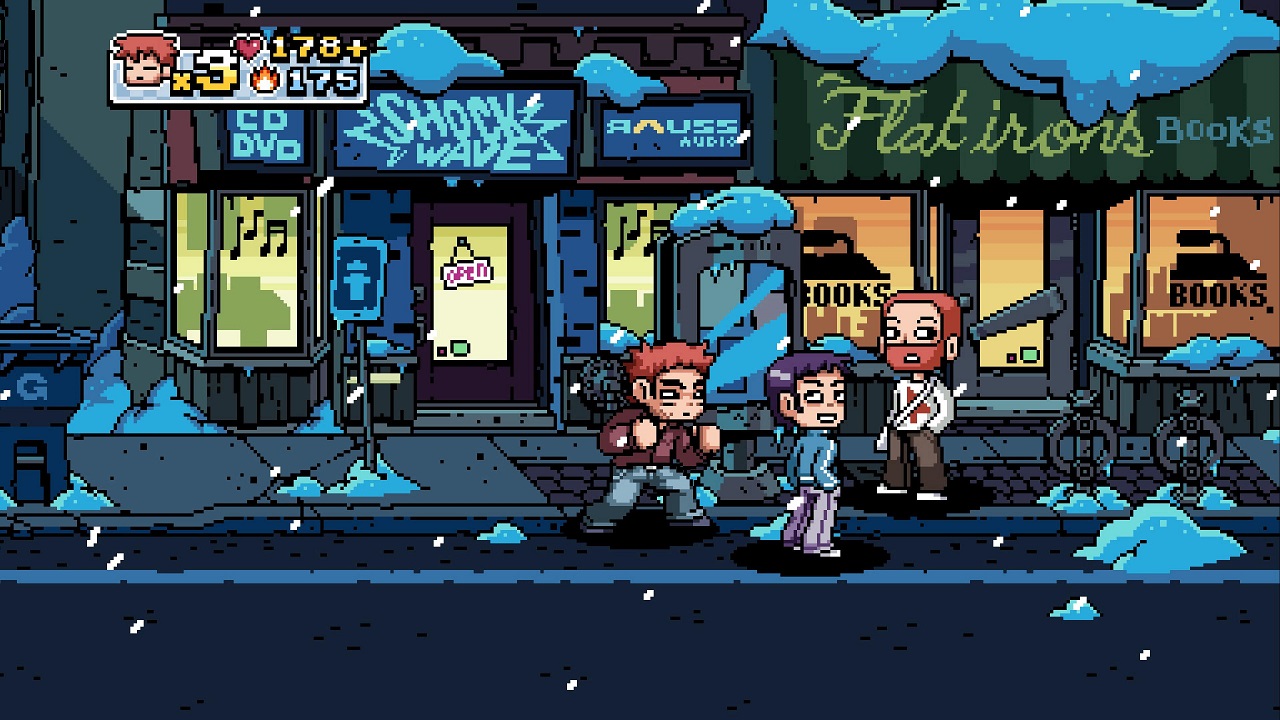 Scott Pilgrim vs. The World: The Game - Complete Edition is out and with returns all of the brawling fun of defeating each of Ramona’s 7 evil exes. For all of the fun that entails, it also means getting a handsome supply of money to buy items to increase your stats throughout the game and make sure you’re in solid fighting form for all of the challenges ahead. Unfortunately, the shops in Scott Pilgrim: The Game don’t tell you what their items will do before you buy them. But that’s why we’re here! With this guide, you’ll be able to find each shop throughout the game and see what the items they sell will do for you.

Scott Pilgrim vs. The World: The Game shop locations & items

Below you will find each shop in Scott Pilgrim vs. The World: The Game by level, where they are located, what they sell, and what each item does. Enjoy!

Most of the shops in the game can be found in the Shopping District, which is conveniently the halfway point of the first level. You can return here at any point once you’ve completed the level the first time to check out the shops and find the items you need. You’ll find them below in the order you’ll come across them from left to right.

The first shop you’ll find is a video store with an exorbitant cost for Scott Pilgrim’s late fees. There’s no way you’ll pay this off on your first run, but keep it in mind for later because once you do, it provides some of the cheapest and best stat boosts in the whole game.

A hot drink shop. This place is okay as far as minor stat boosts go and you can take the items to go, but really, you’d probably best safe your money for other shops that will boost your stats further or give you better health restoring items to keep on you in case of emergency.

This is the first shop you’ll find that focuses more on stat building. That said, like Delicious Cup, this place isn’t really the most efficient place for your stat gain or your wallet, and you can’t take any of it with you. The nachos or tacos are probably best for giving you a good health boost on the relative cheap. Otherwise, save your C$.

This shop is well worth your time. Everything here can be taken to-go, but the one you’ll want to keep with you nearly all the time in the early running of the game is the Energy Drink. It’s cheap, gives you a good health and guts boost, and will make you hyper once you consume it.

The Sushi Bar is great and should probably be your go-to for a lot of the early game in terms of health, guts, XP, and stat gain, all in the same sitting. You can focus up on one stat or spread them easily for relatively low prices.

This is the music store and it’s all about stat and XP gain. If you’re not short on health, this might be a better place to spend your money as you get a lot of stats quickly from most of the purchases here, even if it is a little pricier.

Similar to the Shock Wave Records store, Flatiron Books is all about stat gain, but the books also provide a lot of XP in a hurry. This can be good for leveling up fast even as you’re gaining your stats: a winning proposition if you haven’t maxed out your character yet.

Wallace’s Mystery Shop is a hidden place past the Shopping District. Once you pass the bus and head into the underground tunnel, there’s a panel with a star on it on the wall. Approach and it will slide away to reveal the entrance to this shop. Everything here is ridiculously priced, but it has some of the highest stat boosts in the game. Additionally, Tialoc’s Feast allows you to buy 1UPs and Ambrosia is the best to-go item in the game. Personally, we’d suggest saving your money for the video store, but it couldn’t hurt to keep some Ambrosia on you in the later levels.

Found shortly after the first fight in World 2, you should keep an eye out for the trailer eatery. At the far right of it is a door leading into this shop. The items here focus mostly on health and guts gain with very small stat boosts. It’s good for recovery after finishing World 1, but not much more. You can’t even take anything to-go here.

Unlike the Chip Wagon in World 2, Leo’s Place Stand is actually pretty useful. It comes about half-way through the level, which makes it great for getting your health back with items like the Carbonated Water (which you can also take to-go) and the band merchandise items all provide increasing levels of defense boost. Both of these will probably come in handy for the final gauntlet to the boss following immediately after this shop.

Once you get to the Asian restaurant/training dojo full of ninjas, it’s a long way to shop. You’ll find The Frying Tengu pretty shortly after completing a bonus challenge in which you destroy training dummies and fight some ninjas shortly after. The shop entrance is covered in all sorts of decorations and very hard to miss. It also has a lot of recovery food that will probably be very helpful to you after the gauntlet you’ve been through to get there.

Despite the curious spelling of this shop’s name, it does not serve BBQ’d dads. After battling your way through the Halloween Party section, you’ll find yourself on the balcony in the Fire Escape area. Just before you get to the actual Fire Escape, you’ll find a welcome mat with a door behind it. That’s the shop entrance. The biggest thing here will definitely be topping off your health for the battles and boss fights ahead, but you can also get a few stat boosts from the food here.

One of the most important shops in the game. To get to this one, you need to locate the place in the park where four people including Wallace are standing around. In between the trees, you’ll be able to enter a secret location which leads down to Mobile’s Secret Shop. The Special Training is the most important thing here as it unlocks your character’s most powerful attack (Tech Attack 2), but the Ginko Biloba is also pretty great as a to-go item.

This is the last stop before the final battle with Gideon. The most important thing to do with this shop is max out your health and guts, buy an Energy Tank as to-go item for emergency health, and then use anything you have left for some last stat boosts if you can via the Fighting Software. After that, it’s time for a final throwdown with G-Man Graves.

And that wraps up all of the items in the game. With this guide, you’ll take care of the guess work associated with one of the most annoying parts of Scott Pilgrim vs. the World. Want to know more? Be sure to check out our full Scott Pilgrim vs. The World: The Game - Complete Edition review.