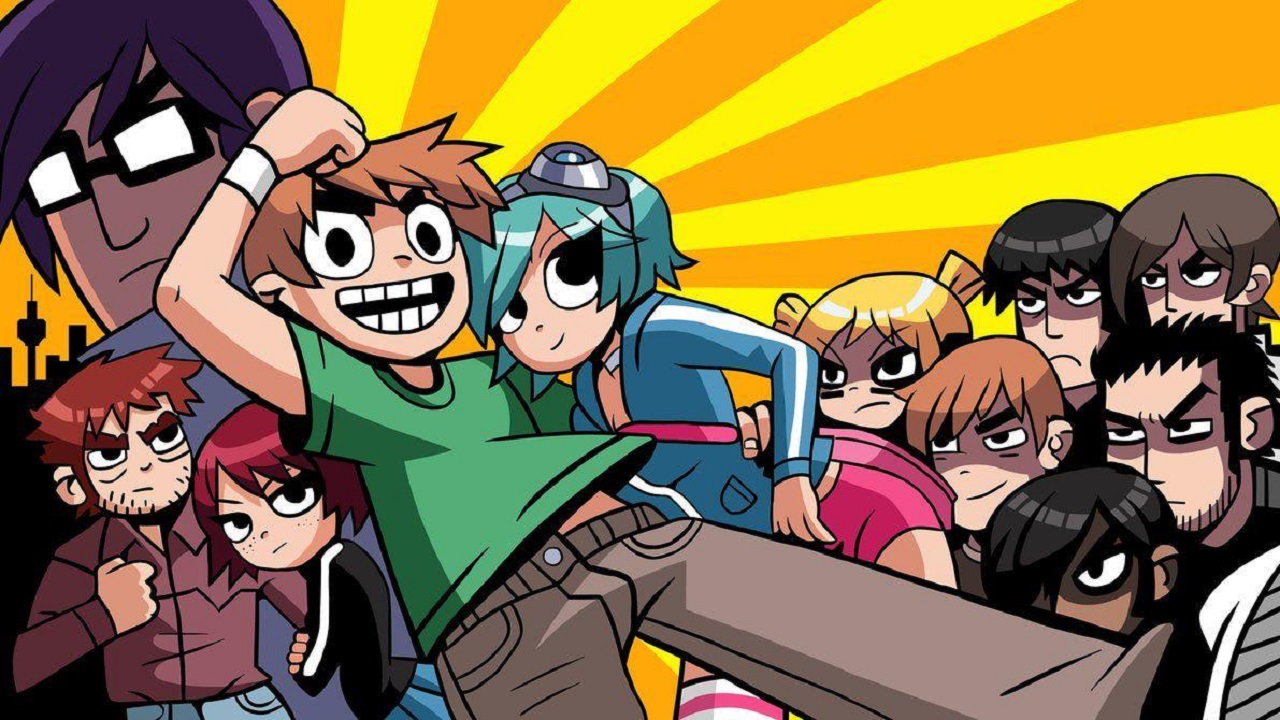 Scott Pilgrim vs. The World: The Game is a River City Ransom-style co-op beat’em-up that came out alongside the launch of the 2010 Edgar Wright-directed film of the same name (all based on comics of the same name). Unfortunately, the game was only released digitally and in 2014 (likely due to expiring licenses), the game was pulled from online marketplaces. Ten years after that initial launch on the anniversary of the film, wishes were granted. After years of begging from fans, Scott Pilgrim Creator Bryan Lee O'Malley got back together with developer and publisher Ubisoft for a remastered release of the game. But 10 years after, and with just a few more bells and whistles, does the Scott Pilgrim game hold up without the movie to carry it? Yes. So much so, yes.

For the uninitiated, Scott Pilgrim’s premise is pretty easy to follow. It even spells it out for you in the opening animation. In the far away and mysterious land of Toronto, Canada, pretty okay musician Scott Pilgrim meets and falls in love with the mysterious Ramona Flowers. However, if he wants to pursue his heart, he’ll have to defeat her seven evil ex-lovers in combat. Thankfully, Scott’s not alone. He’s got grit, determination, the aid of his bandmates, Kim Pine and Stephen Stills, and even Ramona herself to help him. There’s a lot of details that are lost in the translation from comics to movie to game such as his love tryst with Knives Chau and the sage wisdom of his gay mentor and best friend Wallace Wells, but Scott Pilgrim: The Game’s central premise remains plain: Beat up the bosses (and pretty much any of the trendy Toronto population that dares cross your path) and secure Scott and Ramona’s relationship once and for all.

This whole thing is presented at its core as stat-based beat'em-up, most recently such as River City Girls. You and up to three friends fight your way through various levels, earning XP for level-ups and money from defeating enemies so you can enter shops, buy items, and raise your stats. Each level up brings a new fighting technique that expands your combo and battle potential and with friends you can really turn the screen into a maelstrom of flying hipsters as you and your pals bash your way through the streets, dojos, and clubs of O'Malley's stylized Toronto.

Meanwhile, the world is awash in a dazzling display of references to all kinds of gaming lore. Bryan Lee O'Malley was unabashed in his absolute love of games and injected that love into Scott Pilgrim throughout. Bosses explode into coins, there are hidden rainbow highways full of bonuses, and there’s a Guitar Hero battle that devolves into slugging your foe with the instrument when your note is up, just to name a few. It was arguably doing what Ready Player One did before Ready Player One did it, and was far less pretentious or overly referential about it. Scott Pilgrim doesn’t take itself seriously at all, nor does it ask the player to, and that’s kind of always what’s made the game, movie, and comics so charming.

It’s not just visuals and narrative either. Scott Pilgrim’s journey and gameplay is aided by the stellar chiptune soundtrack provided by Anamanaguchi. Even after years of listening to it, most of the songs in this game hold up. Heck, I was still listening to this music during my regular work days even before the re-release of Scott Pilgrim: The Game was ever close to being a thing. From the World 1 theme Another Winter all the to the last credits theme in This is the End, Scott Pilgrim: The Game’s soundtrack is just a fantastic cornucopia of rock and chiptune sound to accompany the colorful adventure. Tracks like Just Like in the Movies and Party Stronger are still certified bangers, and thankfully there’s a few ways to experience the soundtrack by itself thanks to Spotify and Limited Run Games.

I think one of my biggest fears coming back to Scott Pilgrim vs. The World: The Game was that perhaps some of my love was lingering under the shade of rose-colored glasses, and yeah, I’ll admit this game isn’t without problems. The issues mostly lay in the grind that often comes with doing a River City Ransom-style game. As you get to later levels, some foes will just annihilate you in a few hits if your stats aren’t boosted. You can play any level again at your leisure, but that means going back to previous levels to grind coinage, buy items, and get your stats up where they need to be. Add to this the fact that items don’t outright tell you what stats they increase without first buying them and it’s admittedly a lot of trial-and-error thrown on top of a grind.

All of this is to say Scott Pilgrim: The Game always remained so faithful to that particular stat-based style style that it unfortunately brought some of the baggage of that style with it. I think the levels, art, music, and gameplay are so charming that I can play over and over again without issue. You might not and it will probably be annoying when you realize how much effort the game is asking of you.

What “completes” a Scott Pilgrim game in 2020

After all is said and done, what makes Scott Pilgrim vs. The World: The Game - Complete Edition “complete”? Well for one, you can play it. That can’t be said of the previous versions anymore. But there are some decent additions as well. The biggest is definitely online play. I’m happy to say you can buddy up with your friends to throw down on Toronto’s mean streets in local or online co-op. It’s a delightful addition that I don’t think this re-release could have possibly gone without.

Moreover, the Complete Edition comes with all of the DLC that was added after the original edition came out back in the day, that means additional playable characters Knives Chau and Wallace Wells, as well as Boss Rush, Dodge Ball, Zombies, and Battle Royale modes. I’m not wild about the extra modes. Boss Rush is fine, but you can only play local in any of these modes, which is kind of nonsensical. Regardless, they're pretty short and hollow time wasters and don't do much for me.

What is good is the HD widescreen support. It’s not that Scott Pilgrim: The Game’s pixels aren't already pretty, but the visual update makes everything look bright, colorful, and smoother than ever. And so the “Complete” features of Scott Pilgrim vs. The World are a little hit or miss, but online play alone is an addition I’m so happy to see, especially in times where I still can’t get together with friends so easily.

Step up your game and break out the L-word

I’ll say it plainly. I love Scott Pilgrim vs. The World: The Game. I loved it 10 years ago and I’ve only come to appreciate it more since. I identify with Stephen Stills as talented, but also very sleepy, so I delight in being able to play as him in a game again. Yet for all of my love, it definitely has a tedious grind that might annoy people that aren’t into River City Ransom-style beat’em-ups. That said, with or without the movie or comics it’s based off of, I’d still consider it one of the best-in-class of side-scrolling co-op brawlers. Good fighting? Check. Catchy soundtrack? Check. Easy to access co-op? Heck yeah. Get together with your friends online or off and play this one over and over again. Scott Pilgrim vs. The World: The Game has finally returned. Welcome back, Scott. We’re here to watch you kick Gideon’s teeth in.

This review is based on a PlayStation 4 review copy provided by the publisher. Scott Pilgrim vs. The World: The Game - Complete Edition comes out on January 14, 2021 on PS4, Xbox One, Nintendo Switch, PC, and Google Stadia.