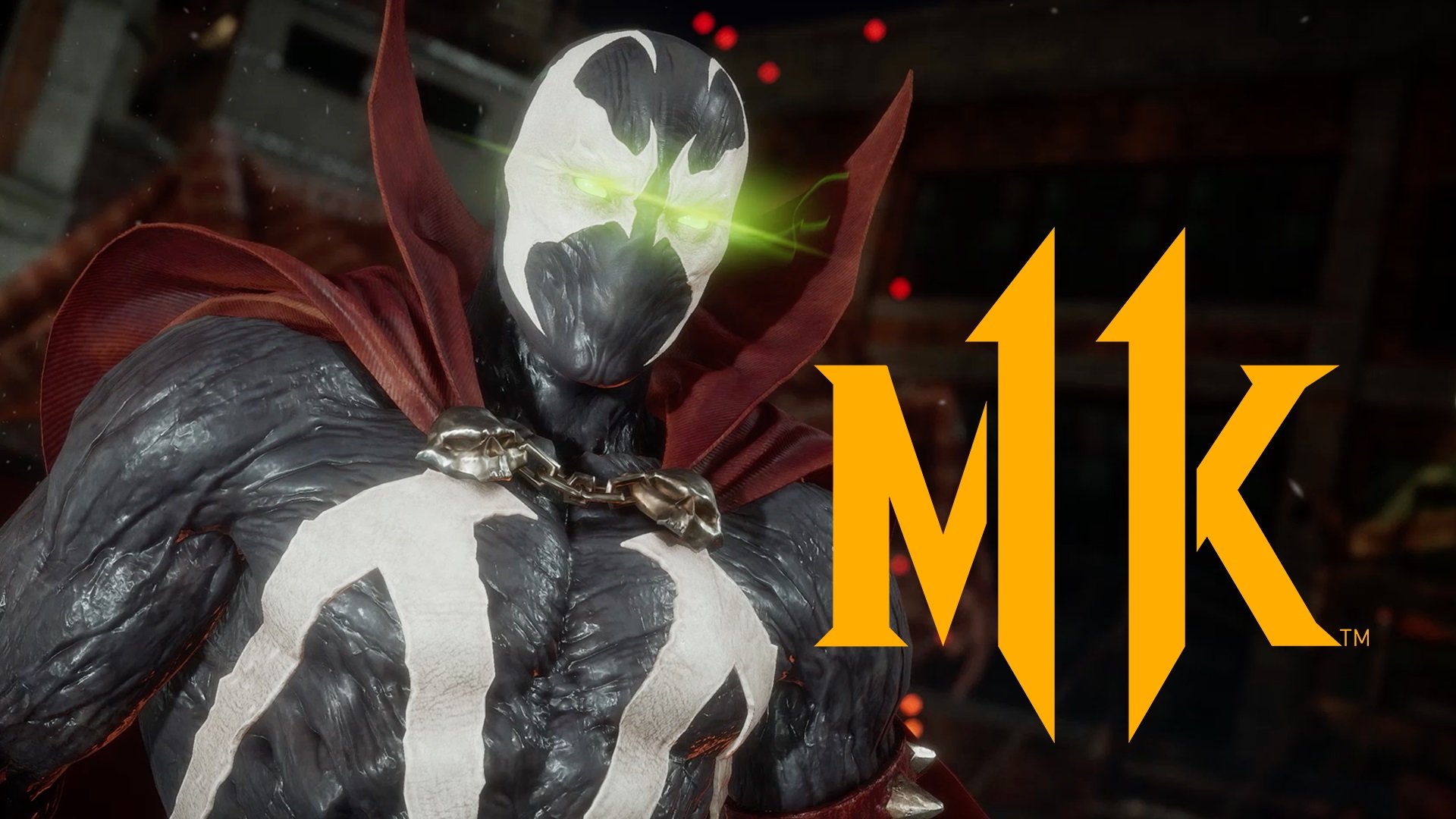 The Mortal Kombat series has been home to a number of guest fighters over the past three games. Arguably none of those guest characters have been more anticipated than Spawn, the Image Comics icon. That was largely evidenced by the positive reception to his reveal trailer from last weekend's Final Kombat.

Among those ecstatic to see Spawn clashing with Sub-Zero, Scorpion, and the rest of the cast is Spawn creator Todd McFarlane. Shacknews recently had the opportunity to speak to the comic book legend about the process in bringing Spawn to the long-running fighting game series, his design, fan reaction, long-time vocie actor Keith David, and Spawn's potential future in video games.

Shacknews: How did this collaboration come about? Who approached who?

Todd McFarlane, Spawn creator/writer/artist: You know what? It's always weird that years later I forget who asked who out for the date first, right? Because what happens is, you just run into common people at different places. I'm sure happens with you and your business all the time, you bump into people and have these sorts of conversations and these "What if?" conversations.

Possibly, my guess is since we were chasing down the toy rights, both parties were having a conversation and the conversation starts, "Wouldn't it be cool if...?" And then things sort of spiral out from there. That's my best guess for how we eventually got there.

Shacknews: Spawn and Mortal Kombat were both created in 1992...

Shacknews: Exactly. As the years went on, did you ever imagine that Spawn would be a part of a Mortal Kombat game?

McFarlane: Yeah, it's cool! I hadn't thought that we both gave birth to these ideas at the same time. So it's kinda cool that we're the same age and still hanging out with the newer, faster athletes out there. I've always admired anybody that can go into any medium and survive for decades. Because, again, there are so many forces and people move to the new shiny thing. For a bad example, I've always been an admirer of the band KISS, because we can argue about how good their music is, but they're living in an industry that turns over talent at a fast rate and they're still doing their thing literally 40 years later. As somebody who knows how hard it is to survive, anybody who hangs out 20 to 30 years later, I admire their tenacity for being able to do that. Not only has Mortal Kombat survived, they've got 11 iterations of that survival and each one of those seems to be sexier than the previous one because of technology and their knowledge.

It was a fun thing to say, "I'm in Mortal Kombat!" Because you know, I've got a young son, he's 20 and his group, they don't really collect comic books or whatever. They play video games. So all of a sudden, they were excited, because they're coming up to me and saying, "Oh my God, Mr. McFarlane, we hear Spawn's going to be in Mortal Kombat! That's cool! Why didn't you tell us?" Because they don't care what's happening with my toys, comics, or movies. They're just like, "We're video game guys! Why didn't you break the news to us before anybody else?"

Shacknews: What level of input did you have in Spawn's design for MK11?

McFarlane: Well, ultimately, I had to sign off on everything. So just like when I'm making toys, the people at the other end who give me the contract have final authority. So I had to give the thumbs up on all of it. What I was hoping for and what I got in spades was, "Let's have a creative conversation at the beginning and then I'm going to hope that you guys know your game and your fans and what people are expecting way more than I am. I'm just bringing a brand, you know your game and your audience."

So I gave them as wide a berth creatively as I could, because I knew they weren't going to reinvent anything and throw everything out, but I also didn't want them to be so loyal to what had gone in the past that they were forgetting what made Mortal Kombat and the fans enjoy that game. I needed the Mortal Kombat part of it.

Shacknews: The idea of the creative talks interests me. How big a fans of Spawn was the team at NetherRealm?

McFarlane: There was a couple of them that were super geeky, because when they gave the list of what Spawn would say and some of the visuals, when I looked at it, I had to re-jog my memory that, "Oh yeah, not only did that happen, I actually wrote or drew that!" There was a couple of them where I'll have to meet them face-fo-face and go "Wow!" They were literally more fluent in Spawn's 30 years than I was, because I've been busy baking the cakes every month that I lose track of it.

So I knew at that point that they weren't going to go off the rails, because they had too much knowledge. The only piece of the equation then that I needed to temper was that they weren't so knowledgeable, and so up-to-speed, and so loyal to it that they weren't doing the coolest character in the Mortal Kombat mythology, which is all I wanted. My task to them was, create a character, assume that the player knows nothing about me personally or my character personally. This is the first time they're going to be introduced to this character, while they're playing this game. And their comment back is going to be, "Oh my gosh, he's my favorite Mortal Kombat character. Why didn't you invent him 20 years earlier?" That's the home run to me. That was the goal. So the question is for me to get that person who knows nothing about Spawn to say it's their favorite character, "What do you have to put into my character to make that person say that. Do that! That's what I want you to do. Don't worry about anything else. Get the fans to say it's their favorite character and they know nothing else about the character."

Shacknews: Can you tell me about the alternate costumes? And I ask this knowing that NetherRealm loves fan service when it comes to using characters outside of their own mythology. So which ones will Spawn fans be especially happy with?

McFarlane: That's a big one, because ultimately, I try to spend my life not telling the consumer or fan what they should or shouldn't like. What my goal has always been and what NetherRealm is going to offer in spades is, "Here are all these possibilities. You pick the one you like the best!" If you ask me, "Todd, pick the three you think are cool," I could do it. But that doesn't mean they're any more than your Top 3 or anybody else's Top 3. Ultimately, the best Spawn look is the one that the player enjoys the most. So whatever that skin and/or color combo happens to be, God bless it.

Actually, I thought it was actually super cool that some of the colors were... I've never seen my character in those colors. They showed me some samples and they were doing what I wanted them to do, which was, "Hey, this is what people like about playing video games and playing Mortal Kombat." They just like to be able to customize the characters they like the best, especially for somebody who doesn't know who Spawn is! So somebody who doesn't know who Spawn is, they're not going to care if they make him all pink! If they like pink, God bless them! Play the pink one!

Shacknews: How happy are you to see Keith David doing the voice of Spawn again?

McFarlane: Obviously, I have a giant bias to Mr. David, because he was our guy for three years when were putting the HBO show together. So he just cemented his voice as being Spawn in my head. When I hear his voice, I hear Spawn, even when he does his other voice acting in other animation! I sit there and every time I hear it on another cartoon, I go, "Oh my God, it's Spawn!" To me, when he opens his mouth, he's just Spawn.

Shacknews: I also want to ask about the new Spawn action figure. Have you had a lot of input with its creation? Describe the process of bringing it to life.

McFarlane: Well, yes and no, because number one, it looks like the character in the game, which is the character I created, so there's a consistency there. We just got it as accurate as possible. And as I mentioned to someone earlier today, NetherRealm gave us the files, that were spectacular... and I don't mean from an artistic point-of-view, I'm saying on a high-def version, when we convert... I've been making toys for a long time, I've gotten a lot of files from people, in-game files. Some of them are a mess! They work for video games, not for toy conversion. [NetherRealm] gave us these files, they must also be toy geeks, because they were almost flawless. All I had to do was just cut them up and make sure I didn't ruin the silhouette too much when were batting the articulation. They made our job pretty easy.

Shacknews: We touched on it throughout this interview, how excited everyone is to see Spawn in Mortal Kombat. People are excited to see Spawn in Mortal Kombat! So I want to go out on this, has the positive reception to Spawn, has that excitement for the character made you hungry to go a little farther? Is there any part of Todd McFarlane that would like to create a modern Spawn video game?

McFarlane: Sure! Everyday! What are you talking about! Everyday! And as the technology gets better, then the possibilities just grow. So if you're asking me, "Would it be cool to have a Spawn game?" Absolutely! And in that game that I have in my head, are there things that have yet to be seen on the screen? Uhhh... yep! I've got lots of crazy ideas in my head as to what he could do on the screen. They may tell me technically he can't do that or it would take too much time or it would be too expensive to do it, but you just start with your wishlist and go from there.

For those who own the Mortal Kombat 11 Kombat Pack, Spawn is playable right now as MK11's latest DLC character. For everyone else, Spawn will be available on Tuesday, March 24. And if you're looking for more on Spawn, be sure to read up on our recent hands-on preview from Final Kombat.