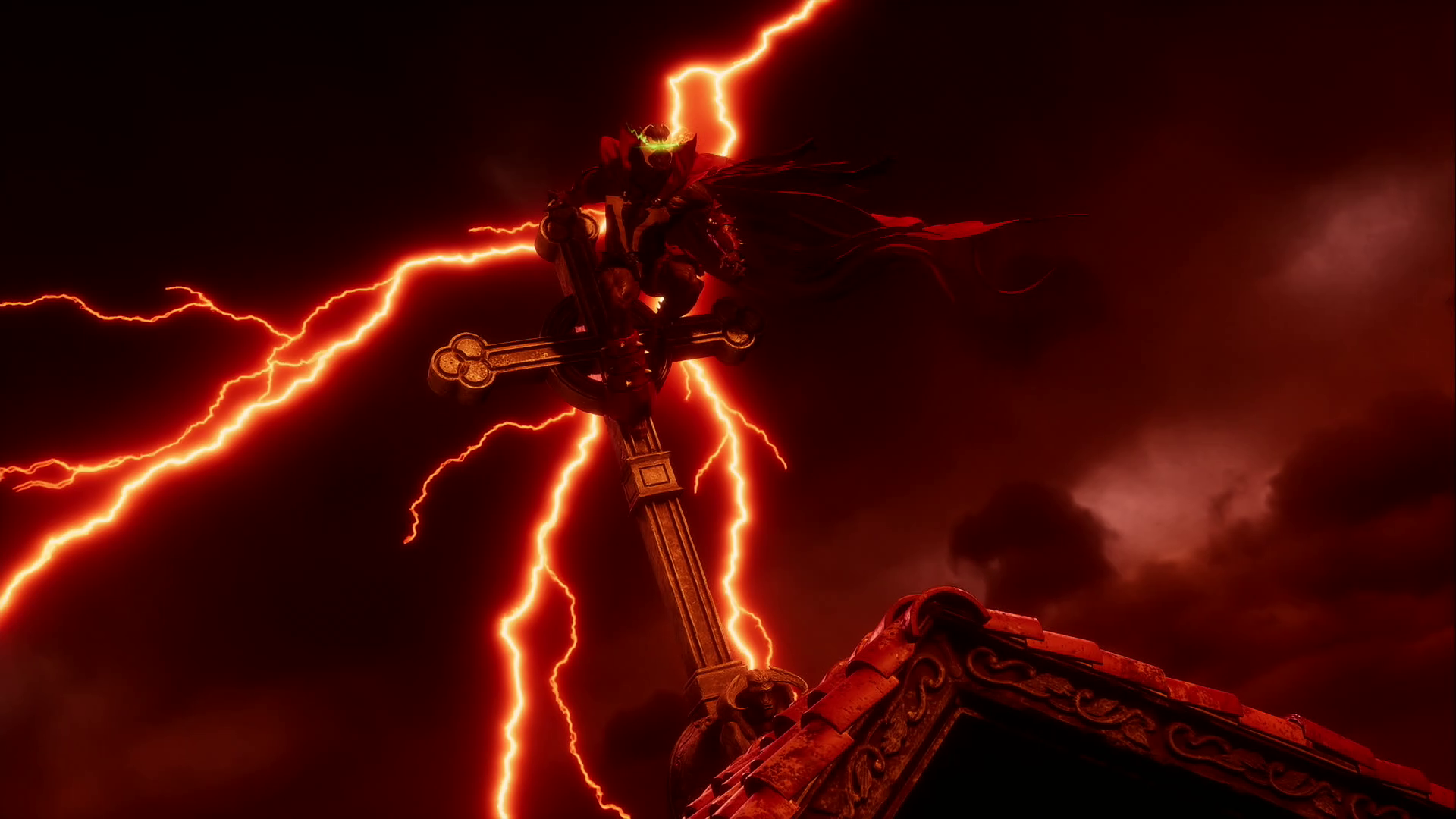 Al Simmons was once a decorated covert assassin within the shadows of the United States government. After a betrayal from within his department, Simmons is murdered on a mission and sent to Hell. But after making a deal with the demon Malebolgia, Simmons returned to Earth as the anti-hero Spawn. With the power of Hell at his disposal, Spawn now enters the Mortal Kombat 11 arena as its newest DLC character. Shacknews recently went to Chicago in hopes of attending Final Kombat, but when the event was closed off to live audiences, we simply settled for a chance to go hands-on with MK11's all-new DLC fighter instead.

Of course, we'd be remiss if we didn't immediately comment on just how visually cool Spawn looks. NetherRealm has nailed the look of Todd McFarlane's iconic character, capturing his costume, his cape, and his movements. While we didn't get to see his alternate costumes, we did dig the red outfit on his second variant, though the resemblance to a certain Merc With A Mouth cannot be unseen.

What's interesting about Spawn is that he comes across as a versatile fighter. If you saw his Final Kombat trailer, you saw him going to town with SMGs, which would imply that he's more of a zoner. However, that's not how I approached him. Instead, I looked for openings to use Unholy Veil, a dashing command grab that sees Spawn rush his opponent and dunk them on the ground like a basketball. This is a fun move to keep opponents off-balance, especially since it can counter projectiles. In fact, if it parries a projectile, it becomes a Krushing Blow. It takes a little bit for this move to get going and, in fact, can be delayed by holding the Back Punch button down. Its long startup does mean it can be cancelled at the cost of one Defensive Gauge bar.

Spawn's other moves both look cool and have practical uses. Fatal Phantasm allows him to literally fry the flesh off his opponent's bodies. It doesn't knock them down, allowing for follow-up hits, though the Amplified version will knock down and also inflict much greater damage. Soul Shattering War Club works as an overhead blow, but the Amplified version will have Spawn pound the ground and knock his opponent down. Necro Blast is Spawn's projectile, firing off a single blast at his opponent to keep them at range. It can be Amplified to hit multiple times. If that's not to your liking, there's a custom move called Gun Blazin that replaces this move with an angled barrage of bullets from Spawn's SMG.

Things change up a bit depending on Spawn's variation. His first one, Inner Hellraiser, gives Spawn some aerial maneuvers. Leetha Glide lets him coast through the air with his cape, while Fallen Angel is essentially a divekick that can be followed by a quick combo. His other variation is Inner Demon. This also gives him Leetha Glide, but replaces his Soul Shattering War Club with Charging Hellspawn. Charging Hellspawn is a hard-hitting tackle, which can be amplified to launch your opponent towards you, setting them up for a juggling blow.

The other thing to note about Spawn is that he's a bit of a gimmick fighter, in that some of his specials are less "moves" and more "trade-offs." In keeping with the character's source material, players can make their own deals with the devil through the use of certain moves. Soul Forfeit, tied to Spawn's first variant, grants players easier Krushing Blows. In exchange, not only will the Krushing Blow deal slightly less damage, but it also permanently destroys one Offensive Gauge bar for the rest of the game.

The other trade-off is far more tantalizing. Those creating a custom Spawn variant can find a special move called Invoking The Legion. This allows Spawn to use his Fatal Blow anytime. Yes, you can open a round with your Fatal Blow! If you use this move and still opt to use your Fatal Blow with less than 30 percent health remaining, it will do even greater damage. Just keep in mind that the Fatal Blow rules still apply and it can only be used once per game.

Spawn is fan service in the best way, from the design of his character to the use of original HBO series actor Keith David, to the dialogue he shares with other characters (he and Raiden sharing a Batman anecdote is a hoot), to the moves that make him feel faithful to his comic book source. As a fighter, it's hard to gauge whether he'll be successful in online and competitive circles the way Joker has proven to be. But if you're just playing for fun and really like the character, then you'll love Spawn.

Those looking to try out Spawn won't have to wait long. Those who own the Kombat Pack can pick him up this Tuesday, March 17. Everyone else can pick him up a la carte one week later. And as has been the case with all DLC fighters to this point, you can sample Spawn in the MK11 Towers of Time mode for a limited time after his release.