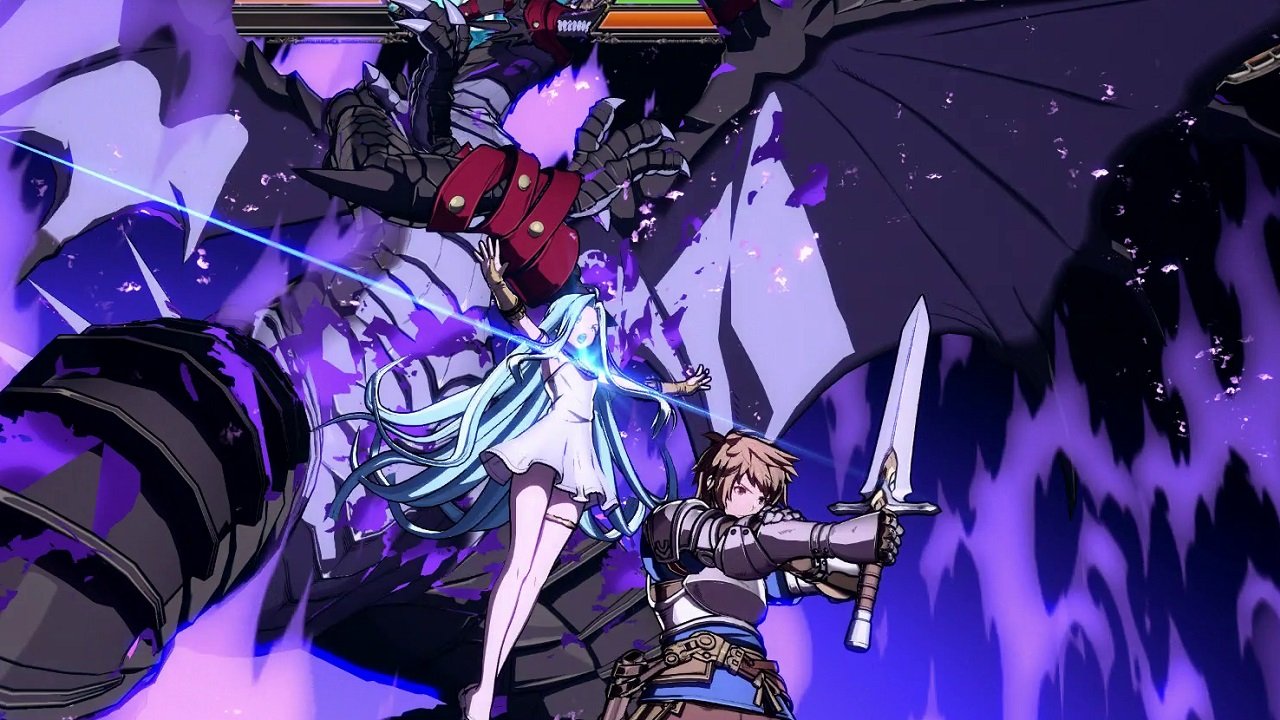 Granblue Fantasy Versus review - Opening the skies with beauty in simplicity

At this point, Arc System Works is being handed nearly every nearly every popular license under the anime sun to inject their trademark fighting flair into new and interesting games. For their latest trick, they got together with Cygames, taking the super popular mobile JRPG Granblue Fantasy and converting it into a fighting game: Granblue Fantasy Versus. GBVS takes the Granblue Fantasy universe, gives it a splash of Arc System Works style, and converts many of the universe’s popular characters in a proper fighting roster. The whole experience ends up being both inviting to new fighters, respectful of the original game’s RPG sensibilities, and rewarding to competitors who master its tricks.

Getting a little Guilty Gear in your Granblue

The surface design of Granblue Fantasy Versus utilizes the 2.5D cel-shaded style that Arc System Works has been using on games like Guilty Gear Xrd and Dragon Ball FighterZ and applies that style to a roster of Granblue Fantasy Characters. Many of the archetypes are here. You’ve got your rush-down characters in Gran and Katalina, your long-range zoners in Ferry and Metera, your speed demons with Lancelot, your big-body heavy hitters in Ladiva/Fastiva and Vaseraga, and even some oddities like Lowain.

The Granblue Fantasy cast is ultra-vast with nearly six years worth of characters to choose from and its wild to me that they managed to whittle it down to the 11 they chose for launch, but there’s a lot of demographics represented here. Lowain is comedic, but he has a lot of trickery with his dudebro friends and a machine to provide distraction. Meanwhile, Ladiva is the resident grappler, but she also has a strong brawler style and can beat the holy heck out of unprepared opponents in no time. Characters like Gran, Zeta, and Katalina provide utility, while Lancelot overcomes with speed, and Perceival features a ton of pressure and aggression. It’s a pretty well-rounded cast and it will only get better with the already confirmed waves of DLC characters coming to the game that pluck even more characters out of the Granblue universe.

What’s more, the characters, their moves, and the battle stages are just plain gorgeous. Arc System Works most certainly knows how to stylize their characters and environment, and even though Granblue Fantasy had its own distinct style already, Arc has proven that they know how to honor the source material while making it functional in fighting. When Gran summons a giant death ray-spewing dragon in his super move, it’s just amazing to watch every time.

The old fighting game tricks, but with some new shortcuts

The tough sell on a lot of fighting games is that they can be hard to get into if you haven’t played much of them. Arc System Works is no stranger to bizarre inputs necessary to pull off its characters’ best moves in games like Blazblue, and their games have long been considered to be some of the most technical out there with a high barrier of entry. Even so, they’ve also explored simplicity and accessibility with the likes of Dragon Ball FighterZ and Blazblue Cross Tag Battle, and they’ve gone for an interesting wrinkle in Granblue Fantasy Versus.

In consideration of Granblue Fantasy’s background as an RPG, character moves are “skills.” In addition to their normal attacks, each character has four main skills (some with sub skills), at least one regular Skybound Art, and a Super Skybound Art that can be used when your health bar is low. There are technical inputs for each skill that are similar to the quarter circle fireballs, forward-down-diagonal jumping uppercuts, and many other fighting game inputs we’re used to, but there’s also a skill button to which each of the four main skills and subskills are mapped, as well as a more simplistic way of inputting super moves. If you can’t do the input for a skill, you could always just use the skill button to perform that move with a single press.

There’s a bit of a catch to the skills. They also work like in an RPG in that they have cooldowns once used. The cool down is dependent upon if you used a light, medium, or heavy version of the skill, or if you utilized the skill button to cast the skill. Inputting the technical command for the skill offers a faster cooldown, but sometimes when you’re doing a combo, it’s just easier to use that skill button. In this way, even if the game makes you wait a bit longer to be able to use a skill again, it keeps all of your character’s moves within a single button’s reach if you need it. There’s even a block button in case you’re no good at guarding against people who switch sides on you to go for cross-ups.

Granblue Fantasy Versus has plenty of options that will allow the well-versed technical player to become a powerhouse, but its numerous accessible inputs make it one of the most inviting and easy-to-pick-up fighters I’ve seen in years. The only real input issue for me was in the roll and dodge commands that are linked to the block button as their input seemed to linger just a bit for me even after I’d let go of the block button to move again, sometimes putting me in harm’s way with an unfortunate and unplanned roll.

Some light RPG with your fights?

We all should have known that where Granblue Fantasy Versus went, its more popular RPG mechanics wouldn’t be far behind. The game features an RPG story mode in which you play through the story of the collected GBVS characters and their battle against a new evil. These battles amount to multiple scenarios of brawler antics against some pretty garden variety enemies. Each chapter usually ends with either battling a roster character to earn them for play in RPG Mode or battling a bigger story boss with some unique method to successfully attacking them. Nothing in the RPG Mode feels all that threatening or compelling. There really wasn’t any battle where I felt like I was really in danger of losing, and S ranks for quests and missions seemed to come with ease as well.

Even so, Granblue Fantasy Versus features a sort of gacha element popular to the nature of the Granblue Fantasy RPG. For each quest you finish, you can collect weapons, or get premium draw tickets that allow you to draw for more gear. This gear allows you to power up your characters in RPG Mode and further trivialize any challenge you run into, but more importantly, you can sometimes draw a weapon that is an actual skin for a character’s gear in the fighting game.

For instance, Lowain starts with regular-serrated butterfly knives, but collect the Emotion Splosion weapon and you can equip him with pink crystal knives that are quite a bit flashier than his regular knives. You can even equip the unique weapon skins in Arcade or Online matches. It’s a neat thing that almost makes the otherwise humdrum grind of RPG Mode kind of worth it to get cool trinkets for your favorite characters.

Fighting against the countless denizens of the sky

If you think yourself worth your fighting mettle, you’ll probably go into Online matches at some point. To this end, Granblue Fantasy Versus offers both extensive player lobbies and ranked matchmaking. Lobbies are fun, with each taking place on a sky ship full of arcade machines. Just step up to a machine, have a seat, and wait for another player to play. Ranked is also interesting as you rank up by collecting crystals to fill a bar and then go for a 3 out of five set of them to successfully raise your rank.

With good internet, both forms of matchmaking are fairly enjoyable, and I rarely ever noticed a hitch in graphics. However, it is worth noting that Granblue Fantasy Versus still uses Arc System Works’ dated Delay netcode, meaning the overall state of the connection delays the game by a few frames from your button presses to try to compensate. Sometimes this creates infuriating lag with bad connections. It’s been a problem of Arc System Works for years as they refuse to move towards what many (myself included) would consider a better rollback netcode option. Alas, it is what it is.

When connections were good, matches were clean and crisp, and I played a lot more clean and crisp matches than bad ones for my experience, so I can’t complain too much about my overall online experience. That said, where you can see conneciton qualities and use filters to limit your experience in ranked, those options don't exist in player lobbies, and there's no reason they shouldn't.

I can however complain about the loading times in this game. Granblue Fantasy Versus has a loading screen for just about anything. From entering training mode, to leaving a match, to going into the RPG Mode, to going into the quest menu in RPG mode, nearly everything has a loading screen... and they're too long. It's fun enough when you're in there, but the loads between just about everything you do in Granblue Fantasy Versus are just kind of absurd.

A beautiful Fantasy… Versus

Granblue Fantasy Versus is a fantasy blend of both Granblue Fantasy RPG sensibilities and Arc System Works fighting and visual pedigree. The use of RPG systems to offer simplified character move inputs with the addition of cooldowns on moves is a great marriage of style and functionality, and the characters and their moves are just gorgeous, offering a great and satisfying set of archetypes that will only grow with more additions from the vast Granblue Fantasy roster. The RPG Mode can be boring and grindy, but the unique weapon skins for characters almost make up for it, and while the netcode isn’t where many would like it to be, online play isn't entirely broken either. The only thing that really breaks up the fun is numerous loading times for every transition in the game.

Even with its issues, Granblue Fantasy Versus is still hands-down one of the most beautiful and accessible fighters I’ve played in years, and with its prominent place on the mainstage at EVO 2020 and other major fighting game tournaments, I can’t wait to see how Cygames and Arc System Works support it throughout the year.

This review is based on a PlayStation 4 digital copy provided by the publisher. Granblue Fantasy Versus is set to release in the US for PlayStation 4 on March 3, 2020, and on Steam on March 13, 2020.