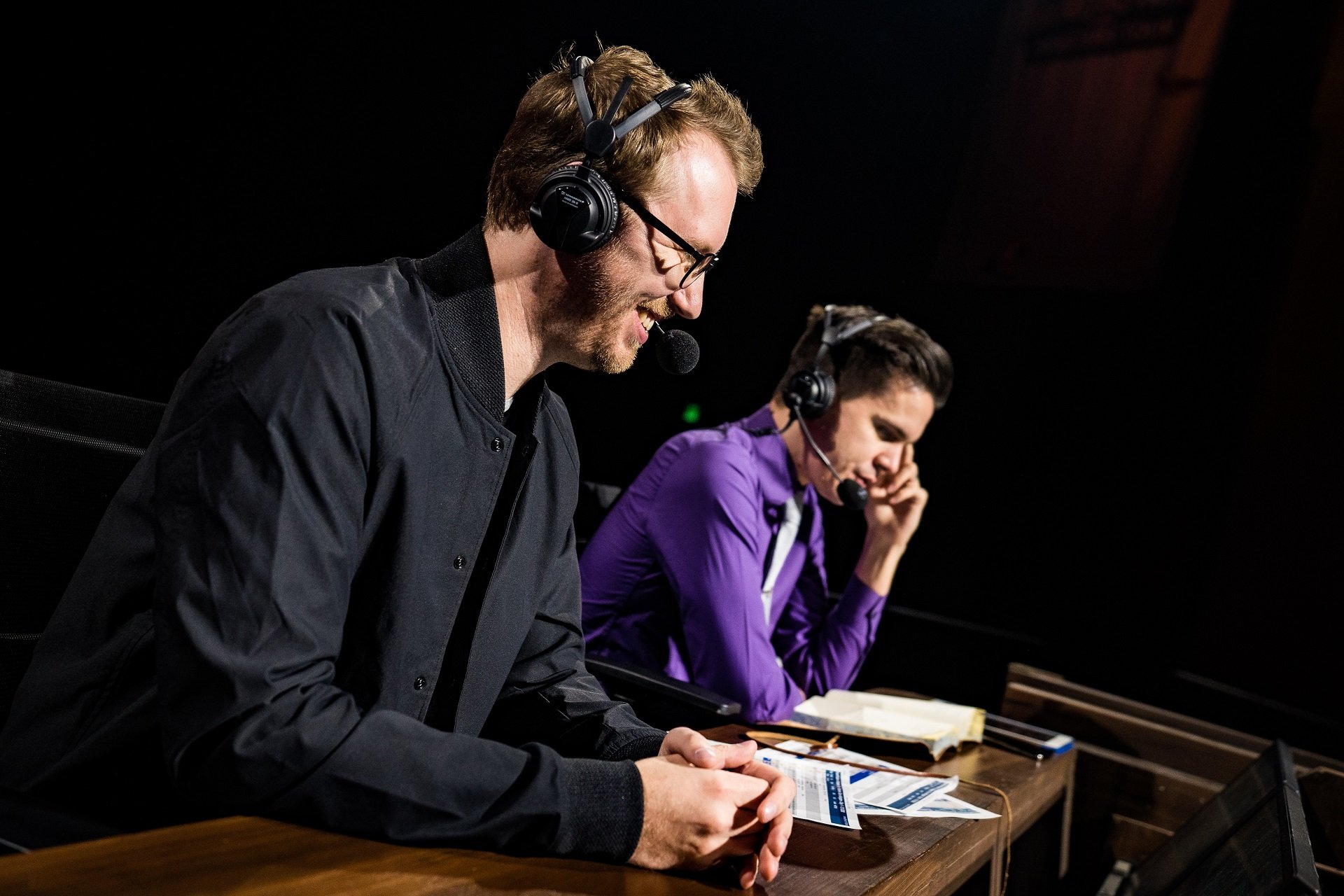 DoA on returning to Hearthstone casting: 'I was in cram school'

Esports followers recognize DoA from his days as a caster for League of Legends and later as one of the voices of the Overwatch League. However, some might not be aware of his card gaming background and his enthusiasm for games like Hearthstone. With that resume in mind, Blizzard happily brought DoA into the fold this weekend to join seasoned veterans Dan "Frodan" Chou, Simon "Sottle" Welch, and TJ Sanders on the call. And in-between caster banter and T-Mobile sponsor reads, DoA took a moment to talk to Shacknews about the transition back into Hearthstone, his current thoughts on the game, the competitive scene, and whether anybody in other games should similarly consider taking a sideways step into casting a different game.

Shacknews: DoA, you've been away from Hearthstone casting for a long time. What does it mean to you to be back?

Erik "DoA" Lonnquist: It's just really fun. I've played card games since the mid-90s with Magic: The Gathering. Played a whole bunch of ones competitively in tournaments and things like that. So when Hearthstone came out, it was exciting for me to finally get to incorporate my little card games with the esports career that I've begun to build. So when I had to leave that behind for Overwatch League, it was bittersweet, because Overwatch League was such a cool opportunity. But at the same time, it did mean I had to give up Hearthstone because I simply didn't have enough time to keep up with it.

With the decision to move away from the Overwatch League and re-explore being more of a freelancer, part of that is getting to reconnect with some of the games that I've been missing doing and so here we are. It feels great!

Shacknews: How much has Hearthstone changed since you last called a game?

DoA: It's changed in a lot of ways for the better, honestly. The numbers are bigger, which makes the games more exciting. It feels like you can put more power on the board faster. That's a lot of fun. Part of it, too, is that I feel like when I left the game, the prevalent thing was there was a lot of "Get a random (x)" effects in the game. And now that's been replaced by more Discover mechanics cards, which are more consistent. Just a lot of really unique mechanics, like the Galakrond thing, which seems like an upgrade of the C'Thun thing we had back in the day. It just seems like a more polished version of the game, so it's been fun to come back to.

Shacknews: Even with your busy schedule, you've been staying up to date with the game. What decks have you been playing?

DoA: I was in Hearthstone cram school, basically, for the last month, because I only really found out I was doing this about a month ago. And I played casually over the years, but I didn't really look at the competitive scene that much aside from watching a broadcast here and there. So everything I play now is geared on what's going to prepare me the best to cast.

Shacknews: Are there any decks you've seen this weekend that have impressed you?

DoA: Yeah, Highlander Mage, for sure. That's a deck that I tweeted coming into Day 1 that I thought would be a comfort pick for some people. In Hearthstone, traditionally, you're either a Mage player or you're not, because there's a very different skill set with playing Mage, with slower, more control-oriented Mage decks. So I thought we'd see some of it, but I didn't realize that it would have the level of success that it's having. The people who are bringing it are really experts with it and are throwing a lot of curveballs at the other players who may be playing more "standard" decks that they wouldn't have been expecting. And all the versatility that Galakrond Rogue, it seems like Highlander Mage has a lot of that, as well, too, where it has a lot of answers for different stages of the game. It's really interesting to see that come up and match the scariness of other top decks that people were worried about.

Shacknews: People are used to hearing your voice in faster-paced games like League of Legends and Overwatch, but of course, Hearthstone is a totally different animal. How do you change your casting approach when calling Hearthstone?

DoA: It's great, because to a certain extent, I get to relax a little bit more. I've never been a proponent of speaking quickly. I've always felt that one of the things a lot of casters of League of Legends and Overwatch should do is speak slower, because at some point, yeah, the hype is there, but you can get into a situation where you see some of the newer casters come in and they speak so quickly that it becomes a wall of noise. So I've always tried to slow things down a little bit and focus on clarity more than anything else. But Hearthstone makes it easy, where the action is very deliberate. There's points of excitement when big random things happen, when players make the play that wins them the game.

But for the most part, it's less of a vocal strain than something like Overwatch and League of Legends would be, so it's nice in that regard. I don't go home quite as sore every night as I did with those other games.

Shacknews: Similarly, you've seen your share of players overflowing with personality and charisma in those aforementioned games. From a caster's perspective, what stands out about the field of Hearthstone players, in terms of personality?

DoA: Well, like any pool of card game players, the players in this game tend to be a little more reserved than you would see in an Overwatch, a League of Legends, or a Call of Duty. So sometimes it is a little more work to bring the personality of the players out and that's part of our job, in that we need to be spending more time getting to know these guys and helping people get to know them as people. But it's always cool to see people getting more emotive on stage and we have had some players this weekend that have stood out. And then you've got the old standards, right? Firebat [James Kostesich] has always been an outspoken and entertaining personality.

But yeah, to a certain extent, it's a little bit more subdued scene, but that's how card games always are. They tend to be a more quiet, cerebral, competitive endeavor. It comes with the territory, so I think that's fine, but it's always nice to see a big personality come out here and there.

Shacknews: How have Frodan, TJ, and Sottle helped you settle back into Hearthstone casting?

DoA: They've been great. They've been so nice. I come into this knowing that I'm the person with the least game knowledge on the broadcast and I personally don't like that. I never like feeling like I'm behind the other talent, in terms of game knowledge, and I always try, no matter what game I'm doing, to be on par. Even if I'm not the guy on the broadcast to drop those deep knowledge bombs, I at least want to know all the same stuff so that I can facilitate conversation and set that up.

So they've been great, understanding that I am getting back into it after a number of years. And while my core understanding of the game is just as good as ever, it's just a lot of work to memorize like 1,000 new cards almost and just know how all of those work together, understand all the interactions. Picking apart the most ideal plays during your various turns is very complex and so when you pair that with all the new card knowledge, I'm definitely behind those guys right now, no doubt about it. So I'm trying this weekend to just focus on having fun with it and being entertaining, hopefully, and building on the knowledge that I've crammed over the last month or so and then building on that for the next one.

Shacknews: Last question, I want to ask something a little more fun. Casual esports viewers who may be watching this weekend are going, "That's League of Legends' DoA calling Hearthstone" or "That's Overwatch League's DoA calling Hearthstone." Is there a caster for a particular game that you would love to see try a different game?

DoA: There's so many, actually! I think a lot of casters have done different games in the past and it's fun to see what a caster can do with new stuff. Uber [Mitch Leslie] from the Overwatch League is such a fantastic caster. He did a great job with League of Legends in the past, some people don't realize that he did do some League of Legends and did do some Counter-Strike. But I'd love to see him tackle a fighting game. I think that'd be a lot of fun. Fighting game commentary involves a lot of wittiness during the downtime, as well, which I've always thought he's really good at. So I'd love to see Uber tackle a fighting game, that's number one on my list.

But I think a lot of casters, I would just love to see get a chance to tackle fighting games. Maybe I'll get my chance at Smash someday. Who knows?

Shacknews: That would be amazing.

DoA: That would be so much fun! I've played a lot of Smash previously and I've played a good amount of Ultimate before I got super busy with other things. I've always loved that game.

If you missed Hearthstone Masters Tour Arlington, you can catch the video on-demand on the Hearthstone Esports YouTube channel.