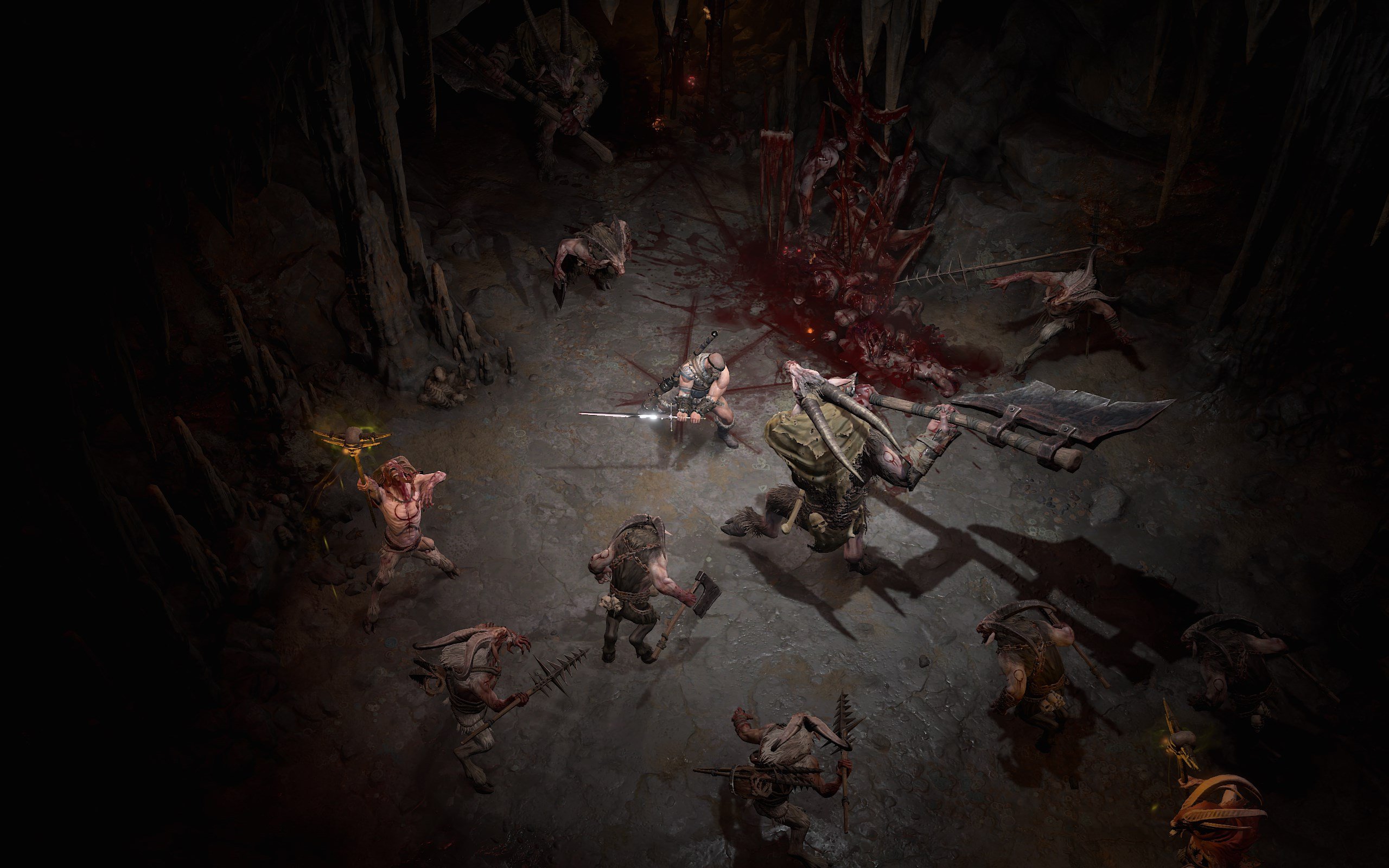 Diablo has always been among the darkest of Blizzard's franchises. That was never more evident than Friday's BlizzCon 2019 Opening Ceremonies. Visceral imagery, blood and entrails, and full-on flesh capes, Diablo 4 does not look like it's going to hold anything back. The publisher is fully embracing the darkness and presenting a much grittier product this time around.

But how does Diablo IV actually play? Is Blizzard reinventing the wheel or sticking to the formula that's made this dungeon-crawler such a breakout phenomenon in the first place. To get an idea, Shacknews went to this year's BlizzCon and gave it a look, braving some of the baddest demons that Sanctuary will have to offer.

Before diving in, there were three classes to choose from:

There's no character creation system here, but each class does look to have four preset models, two male and two female. So it's possible to run around as a female Barbarian or as a male Sorcerer. (Editor's Note: The Sorceress model did only have two female models available for this demo.) Voiceover lines will adjust accordingly.

The first thing that stands out about Diablo IV is that it looks like a much more realistic affair than its predecessors. The refined art style captures the slickness of the Barbarian going back and forth between his four available weapons and wielding them effortlessly. More than that, it captures how hard he's able to hit with them, sending enemies flying by slamming his staff on the ground or dismembering foes with his double axes. Combat feels much flashier than it has in the past, something I noticed as one of the Druids on-screen switched back and forth between werewolf and bear and stylishly ended enemies with his sharp claws and fangs. Just know that certain moves spend individual resources exclusive to each class, such as my right-click club strike spending Fury while the Druid was spending Spirit.

That is another thing to note here is that outside of the instanced caverns and dungeons, the greater outside region appears to be open to other players. As I looked to get going on a quest, I was suddenly joined in mid-conversation the aforementioned Druid, who had the same idea. It wasn't long before the Druid and I had informally partied up, but rather than continue on our quest, we found ourselves enthralled by the shared open world. Skeletons and other demons would pop up and we'd practice our abilities and watch each other work. It feels like something out of an MMORPG like Guild Wars or a social looter shooter like Destiny, where you're not necessarily partied up, but you'll find other players roaming the world. That does seem to indicate that portions of Diablo IV will be always-online.

Those who choose to go beyond the shared open world can jump into various dungeons, each with their own challenges and their own massive bosses. And as one would imagine, the bosses will drop copious amounts of gold and loot. Loot is one of the biggest draws of any Diablo game, but it feels too early to judge this aspect of the game, given my extremely limited time with it and my inability to respec my character. Item and loot synergies are definitely something that will require a little more time to judge properly.

There will be no shortage of ways to earn loot, especially through the aforementioned shared open world. These public areas will have their own bosses, which can be summoned by completing certain tasks. Once a boss is summoned, surrounding players will be alerted to its presence and will be allowed to participate. You'll probably need them, because these bosses are enormous and wildly powerful. It actually didn't take me too long to die facing off against this giant, slimy dragon. It's here that it's worth noting that the dodge roll that was a staple in the console versions of Diablo III is now a regular part of all versions of Diablo IV, with the move tied to the space bar on PC.

There were other elements of Diablo IV that I wasn't able to try out. For example, I couldn't change up my skills or play around with the talent tree. That does seem to feed into the feeling that this game is going to spend a lot of time in the oven. However, there's a lot to be encouraged by here. Blizzard looks to be keeping the best elements of Diablo III, while also adding in some much-needed upgrades, like the grittier art style, the increased level of violence, and a greater emphasis on cutscenes. And it's not just cutscenes, but cutscenes that are personalized to your character, a welcome change from the pre-rendered cutscenes of the past.

Diablo IV does not have a release date and nobody at Blizzard looks to even be hinting that there's one on the horizon. So don't expect to see this anytime soon. However, whenever the time does come to step into Sanctuary again, look for it to release on PC, PlayStation 4, and Xbox One.