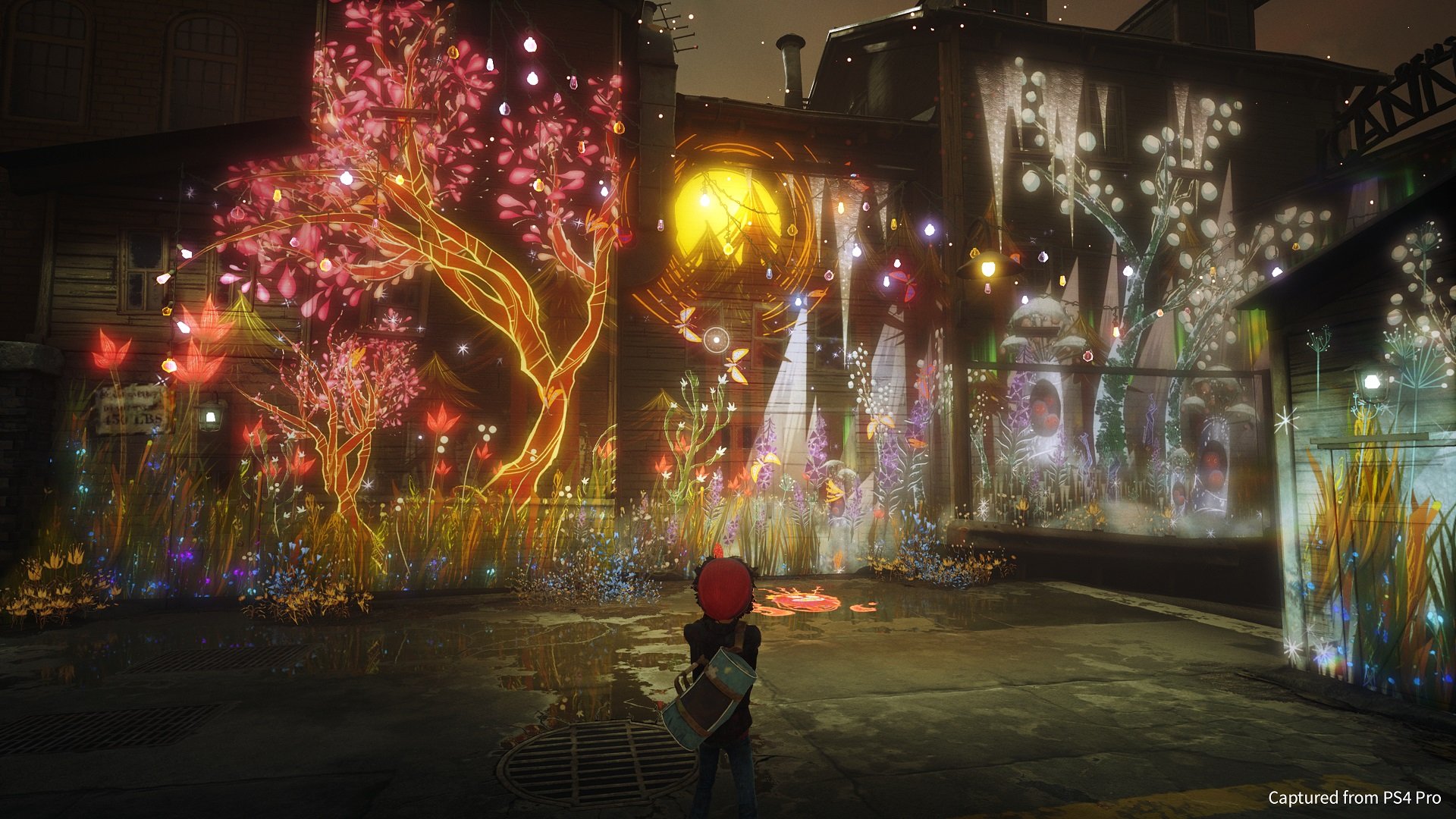 The world by its very nature is beautiful, but it's a world that has seen its brilliance diminished over the past couple of centuries. Whether it's through the ravaging of natural resources, the population boom, or other means, the world isn't as bright as it once was. But even with all the doom and gloom that comes with warnings of a "point of no return," there are ways to help restore the world's shine. Right-minded people take part in it everyday. The restoration of life, nature, and beauty is the central theme of Concrete Genie, a new first-party effort from Sony Interactive Entertainment and its smallest first-party studio, Pixelopus. Concrete Genie is a game about expression and how artistic expression can make the world a better place and when it sticks to that idea, it's an incredible effort.

However, it should be noted that while Concrete Genie's central theme remains the same over the course of the entire game, the manner in which it expresses it changes significantly in the game's final hours. We'll get into that shortly. But even with the curveball that Pixelopus throws out, Concrete Genie is a game they should be very proud of making. It's a visually-pleasing masterpiece that pushes forward the joy that comes out of creation.

A fresh coat of paint

Concrete Genie is set in the abandoned harbor city of Denska, once a thriving tourist town. The city is now completely empty, left to rot under a mysterious darkness. A young boy named Ash still comes back to Denska, mainly to remember better days when it brought happiness to hundreds. However, he's not the only one hanging around. A gang of vandals also hangs around Denska's remains, spray painting walls and causing wanton property damage. The bullies don't hesitate to push Ash around whenever they see him, making them a dangerous nuisance.

Ash's adventure begins when he finds himself in an abandoned lighthouse, where a spirit takes the form of one of his sketches. He's given a special paintbrush (I've been tempted to call this the Celestial Brush more than once) that allows him to paint walls with vibrant, lifelike objects. More than that, it allows Ash to draw special creatures called Genies and bring them to life. The Genies are childlike beings that can interact with the landscapes that Ash puts together. They act as companions and, under certain circumstances, helpers. The idea becomes to paint Denska back to life using the brush and the Genies.

As one might imagine, art plays a big role in Concrete Genie, particularly wall art and murals, but that's not all that Pixelopus uses to great effect. Flashbacks are told through gorgeous hand-drawn animation, like something out of a children's book. They're used to great effect in both Ash's recollection of Denska and also in conveying the backstories for the bullies. And yes, to my surprise, the bullies have backstories.

It's after the first few chapters that I expected the world to open up, but it turns out that Denska isn't actually very big. There's the fishing port, the hydroelectric plant, the waterways, and... that's it. There isn't a whole lot of town to bring to life, which is to the game's detriment. It would have been nice if the town was a little bigger or if there was a neighboring town to help paint, but small little Denska is the only playable area in the game.

While Ash can paint most walls, the target areas are the ones adorned by dimmed-out light bulbs. The Genies are happy to help by playing around the area, making it feel vibrant. However, they'll sometimes ask for certain objects. This is where the game adds a degree of challenge, since Ash may not have the specific object they want. At the start of the game, the bullies ripped out pages from Ash's sketchbook and threw them to the winds, so the idea becomes to find the loose pages blowing around the town. Fortunately, the pages are easy to pick up and if there's a certain requirement to move forward, the page will more often than not be just a few inches away.

Fulfilling a Genie's specific request will result in Ash getting Super Paint, which can clear off tougher splotches of darkness. Super Paint is a timed mechanic, so whenever it's active, it feels like there's a rush to erase as much of the darkness as possible. I felt more concerned with racing against time than with drawing something nice, which I felt started to diminish the game's main purpose. Fortunately, it's easy to refill the Super Paint meter, since the Genies always seem to have something they're requesting.

It's in the player's best interest to give the Genies what they want, because different-colored Genies can fulfill different functions. They can either burn objects, activate electrical switches, or blow objects to other areas. This leads to some interesting puzzles, some of which require Genie combinations. Again, the story felt too short for this idea to realize its full potential. Ditto with the idea of Genies wanting to play with Ash. Occasionally, players will find objects in the world, like a basketball, where Genies will want Ash to use the object to play with them. It's fun for the first few chapters, but then the mechanic is never really utilized again.

There's something to be said about completing an objective the way the player wants and completing an objective with what they have available to them. In certain areas, Concrete Genie revels in allowing the player to paint walls and complete objectives in ways that appeal to them. I could paint beautiful landscapes in certain places and feel proud of the way I finished that objective. Unfortunately, the bullies' presence makes that a little tougher to do, in some instances forcing the players into more stealth-oriented gameplay. The focus is centralized on not getting spotted to the point that you're just splotching whatever you can on the wall to get that area over with. Fortunately, that's not the whole game. In fact, the waterways are completely bully-free, allowing for full self-expression.

But just as you start to get into a groove, Concrete Genie takes a big left turn.

After getting roughly two-thirds of the way through the story, Ash's work is completely undone via a manner that I won't spoil here. His Genies become corrupted and they become Dark Genies and suddenly, Concrete Genie becomes a completely different game. Ash gets a health meter, three different attacks, paint skates, and numerous enemies. The game's serene essence is thrown out the window and this becomes more of a traditional third-person platformer. It's such a jarring transition that I can see more than one player getting turned off by it.

As far as serving the narrative, it pushes that forward in a satisfying direction. But it feels like such an odd way to end a story that, to this point, had been about artistic expression. Just like in some of the sequences mentioned earlier, the game's final minutes are more about just splotching whatever on the screen as fast as possible more than creating something that speaks to the player. It doesn't feel like it matches up with the premise that Pixelopus is aiming towards.

Once the main adventure is over, there is a Free Painting mode for players to truly express themselves without the pressure of the main adventure. And while Ash's sketchbook doesn't contain unlimited objects, they do contain enough for players to piece together something beautiful. The Genies are also happy to play around with players and suggest their own ideas for how to improve what's around them. Better yet, Free Painting is also available in virtual reality for PlayStation VR users.

I'd be remiss if I didn't mention that painting is mostly a breeze. The DualShock 4 is used for motion-control painting, which feels intuitive at many points. However, there are going to be instances where a PS4 is positioned out of the way, a sensor is off, or something isn't calibrated right. Fortunately, there is an option setting to turn motion controll off.

Overall, Concrete Genie feels like a satisfying story, even if it does clock in at only four or five hours for the main story. For a value-priced game, that still feels rather short. However, between all of the pages that Ash can grab to add to his sketchbook, there are hundreds of different artistic combinations to bring out. And I will say that Pixelopus largely makes the most of the time given, with multiple art styles and a relatable lead character in Ash. It's not a masterpiece, but Concrete Genie is still a fine piece of art.

This review is based on a PlayStation 4 code provided by the publisher. Concrete Genie is available now on the PlayStation Store for $29.99. The game is rated E10+.