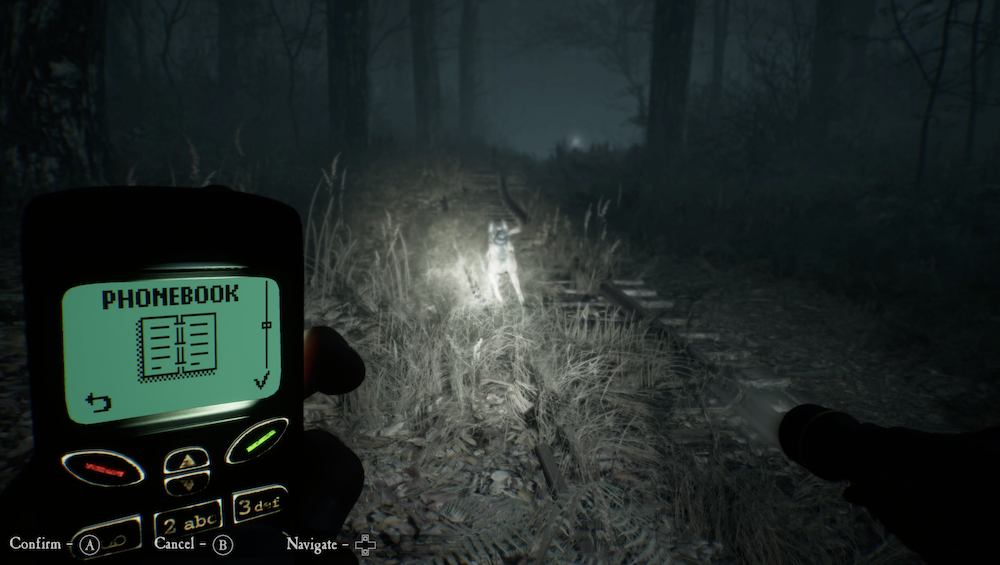 As you're making your way through the Black Hills Forest as Ellis in Blair Witch, you'll no doubt be reaching for classic, Nokia-like candy bar phone here and there. Your phone is a valuable tool that can connect you to ex-girlfriend Jess and other important figures throughout the game, receive text messages and helpful pieces of information, and also allows you to play a special minigame. It even comes packing a full list of numbers for you to call. All contacts are unlocked in your phone from the start of the game, and you can call them at will.

But where do all the calls go to? We've got a handy guide to all cell phone contacts in Blair Witch mapped out below so you know who's worth dialing up and who you can ignore for now. There's plenty of other cool stuff to do with this cool retro phone than call people who clearly don't want to pick up, right?

One of Ellis's old army buddies who was previously serving alongside him. You can try to call out to Alon, but usually the phone will go to the "Line Busy" message that's typical of several of the contacts.

Ellis has a lot of friends from his old army days, and Ashley is another one. Ashley won't pick up, though, and the phone will simply go to the now-familiar "Line Busy" message.

You can call Ellis's doctor, but he doesn't seem to answer usually, and typically it goes to "Line Busy." It could be something of a metaphor for Ellis's fragile state, but it's probably you're calling at odd hours of the day and night.

It's a pizza joint! It must be one of Ellis's favorites since it's in his contact list. They call themselves "the best pizza in Burkittsville." But Ellis is a fuddy-duddy and never actually orders any pizza.

Ellis's estranged girlfriend, who you'll remain in close contact with throughout your journey. You can try to call her several times throughout your journey, and she'll often pick up. She and Ellis will have several conversations about their relationship, Ellis's mental state, and a variety of other things over the course of Blair Witch. It can't hurt to give her a call when you're feeling a little cornered. Sometimes, she'll even call Ellis as well.

Keith is another military pal for Ellis, but unfortunately when you try to call him, you get that dreaded "Line Busy" message. Are you starting to sense a pattern here?

Another ex-military friend of Ellis. What do you think happens when you call? That's right. The line's busy.

Ellis sure had a lot of army friends, didn't he? You learn all about them over the course of the game (and their plight) but not through these phone calls. Roscoe goes to the same busy message as well.

Ellis can occasionally connect with someone who he believes is Sheriff Lanning, but most of the time you can't get an answer. As far as why he may not be picking up from time to time? Well, that's something of a secret for you to find out as you play.

Sylvester is another of Ellis's old army friends, but they appear to have lost touch. He won't pick up the phone, and you'll get the "line busy" notification when you try to call.

One of the few contacts that will actually lead you anywhere, the VA Office phone option will typically lead you to an automated answering machine telling you that all agents are busy. There are a few menu options, but you can't press any buttons on your phone to use them.

If you call your vet, Dr. Reba of Rocco's Animal Clinic will actually answer, showing concern about Bullet's health. It's not much, but you can call in the middle of a particularly scary segment if you need to hear a friendly voice who cares about how your pupper is doing.

This one's self-explanatory. You can check it often to see if anyone has left you any messages. Occasionally they will, and they won't always be kind. They'll be pretty strange, in fact. Hey, why are you calling and leaving these messages, Blair Witch cast? You're creepy.

Now that you're done playing phone tag, you might need some additional assistance with figuring the rest of the game as you're making your way around. Worry not, because Shacknews is here to help guide you through the forest to safety in Blair Witch, no matter what. Be sure to check out the rest of our coverage as you tackle the malevolent forces in Black Hills Forest.

How to link your Ubisoft Uplay account to Twitch
Login / Register