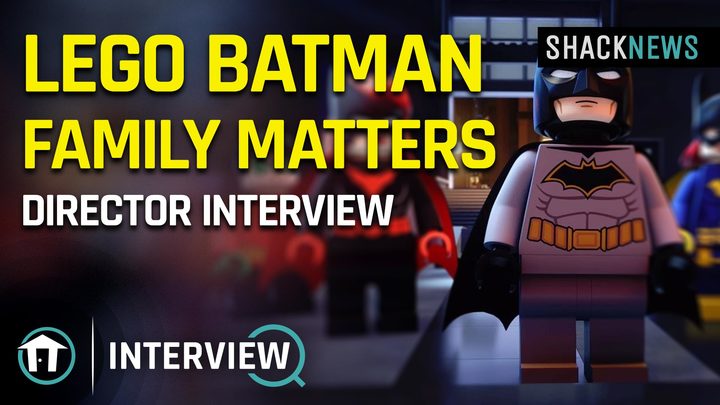 In the newest upcoming installment in the Lego Batman series Lego DC Batman: Family Matters the entire Bat-family is brought together by the mysterious villain known as the Red Hood. What kind of nefarious evil deeds could he possibly be up to? You’ll have to pick up a copy of the Blu-Ray, DVD or buy a digital copy to find ou. But, before you do all that, be sure to check out our own intrepid ace video editor Greg “Burkleton” Burke’s interview with the film’s director Matt Peters about the animation process.

While many fan-favorite members of the Bat-family like Damian Wayne, Batwoman, Bat-Girl, and Nightwing, Greg was quick to point out that one member of the family was surprisingly absent. Will this character’s apparent absence play into the film at all?

While the dynamic duo that is Matt and Greg did discuss the content of the film a bit, the real meat and potatoes of their conversation focused on the pros and cons of working in 2D versus 3D animation and how they compare and contrast. While Matt has worked in both mediums it seems that working on 3D animated with Lego, in particular, has given him a unique perspective on the process. You can check out the whole interview for yourself in the video below.

Lego DC Batman: Family Matters seems to have nothing to do with the Winslows, and I don’t think Urkle makes a cameo, but regardless of all that the film is looking like a fun-filled action-packed romp for the whole family to enjoy. Bat-fans can get their hands on the Bat-fams now via digital download, DVD, or Blu-Ray. For more interviews and coverage of all your favorite conventions, video games, and pop-culture franchises be sure to check out the Shacknews and GamerHubTV Youtube channels.