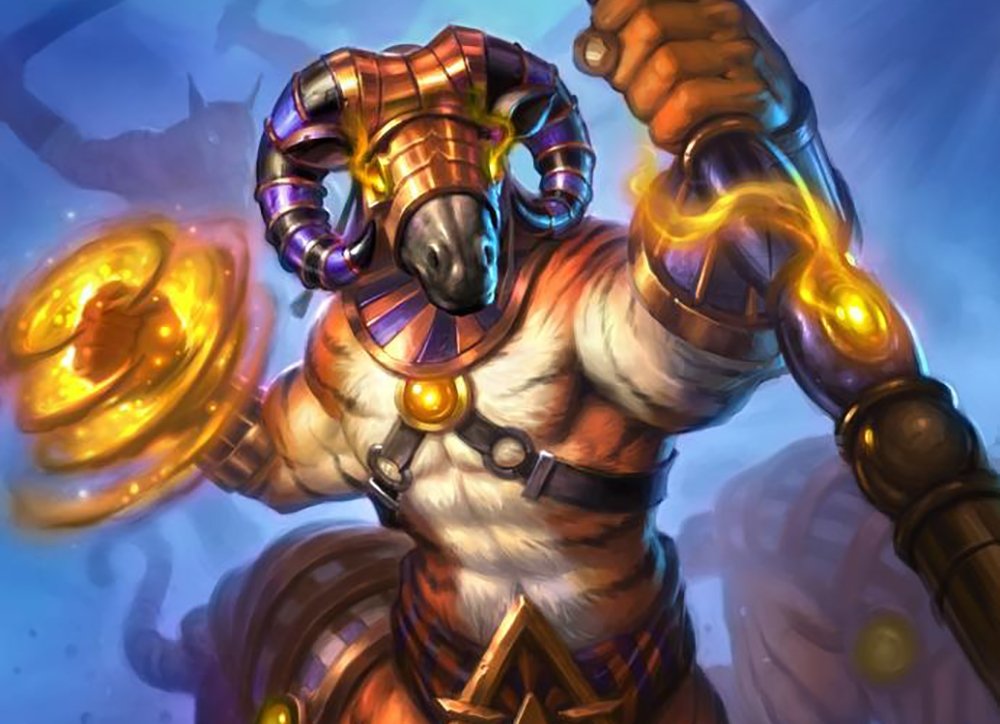 Hearthstone is ready to continue further into the Year of the Dragon, moving forward into this year's second expansion. The League of E.V.I.L. has taken the floating city of Dalaran into the desert for 2019's next expansion, Saviors of Uldum. Blizzard will add another batch of 135 cards to join the Standard and Wild rotations.

That means it's time once again for Shacknews to break down each of the expansion's cards, one-by-one. Before the card reveals begin in earnest, we're going to take a look at the cards unveiled, some of which utilize some brand new mechanics to Hearthstone.

Before we start, a quick recap of what we've unveiled to this point:

And now, let's get started.

Analysis: This essentially summons copies of any minion on the spot. And I know what many people are thinking. LEEROY JENKINS! And yes, if anyone can come up with a way to reliably pull these Shadows out of their deck on the same turn that Leeroy gets played, that's 24 damage on board.

There's also room to play a lot of delitating Taunts that can get in the opponent's way. Safeguard immediately comes to mind.

This one has potential and could be part of a killer OHKO combo before long. Keep an eye on this one going forward.

Analysis: This is the latest in a series of 5-Cost 8/8s with a massive downside. And it's hard to imagine taking any kind of advantage of your opponent getting Reborn minions, unless you're a Priest and the idea is to somehow swipe them.

No player in their right mind is going to willingly pack this into their deck, which means this is here squarely as a poison pill. More than one person is going to wind up with this thing as a random effect and then the race will be on. If you've got the 8/8, try to finish your opponent off as soon as possible before the other side of the board gets filled with things like Reborn Ysera.

(4) Conjured Mirage (3/10)
Type: Minion
Class: Neutral
Rarity: Rare
Taunt: At the start of your turn, shuffle this minion into your deck.
Source: TheFishou on YouTube

It means that all the opponent has to do is simply stand pat and leave it alone. It'll move itself out of the way in short order. It's hard to recommend this one, based on that, especially since it doesn't keep any enhancements. This one feels like a dud, unless the plan is to protect your Doomsayer in the late game.

Analysis: Here's a fearsome new Legendary that will fit nicely into a lot of decks. It won't be the centerpiece, but it will be a strong support card. Siamat can fit into a lot of situations, working as quick removal with Rush or as an impenetrable wall with Divine Shield and Taunt.

It'll find its way into a lot of constructed decks, Shaman decks in particular. Shudderwock looks awfully scary with this guy. And needless to say, it'll be highly coveted in Arena.

Analysis: On paper, it looks like a good Secret for the Mage until you really analyze the text. This isn't the Mage's new Explosive Trap. It's the Mage's new Bear Trap. This Secret doesn't activate until after you get attacked.

There's a key difference between those two distinctions and it's hard to see making regular use out of a spell that can activate after you take massive damage to the face. It destroys Leeroy, but only after he hits you. So it's no good when it comes to preventing lethal Leeroy damage.

This will see play off random effects, but this is a fairly weak Mage Secret.

Analysis: This is a fairly decent Pirate for the Rogue with good 4/4 stats. It's also got a random Sap effect attached, which is going to prove infuriating to certain Mech Hunters and Paladins that are abusing the Magnetic keyword.

With that said, it's also easy to use this effect against the Rogue. Take it out with something like Dyn-o-matic and then just sit back as it comes right back to your hand. Use some strategy wherever it may apply here. Sahket Sapper will see play, so try and minimize that effect wherever you can.

Analysis: An absolutely disgusting new 10-drop in the hands of something like Big Spell Mage. If you're packing two Pyroblasts (Why would anyone do that? Stay tuned) in your deck, this will bring out a pair of 10-Cost minions, along with additional minions for your other spells.

This will prove to be foul and dangerous in certain decks and I would expect to see it a lot in constructed play, with Mage and Paladin players getting the most out of it. The sole downside here is that the 5/5 body will now poison the 10-Cost well, which is going to be bad news for Conjurer Mages. Still, that's a pretty fair trade-off for one bonkers effect.

Analysis: Resurrect Priests are going to be hesitant to poison their minion pool, but with that said, this is going to have a lot of uses. Deathrattle minions with a helpful effect are going to frequently be attached to this thing, which will wipe them out before bringing them back to unleash their effect again.

There are some good candidates for this guy. Witchwood Grizzly comes to mind immediately. But also don't forget to use this thing on your parade of Reborn minions. There's potential for abuse here.

Analysis: The folks at Stop Game offer a pretty good example of where you can use your Wretched Reclaimer. This new Taunt minion is a slightly more expensive, yet slightly lesser version of Rotten Applebaum. But if you can exploit that Reborn keyword, you could heal yourself multiple times.

It's ultimately a toss-up over whether this or Safeguard will be your 6-Cost Taunt of choice, but it's going to be hard to go wrong either way. They're both solid choices.

Analysis: This is somewhat of a throwback. It looks like the old Obsidian Destroyer, which looked like a great idea on paper, but was often removed too quickly to be of any use.

Wrapped Golem seems to alleviate that problem with Reborn, meaning it'll more than likely stay on board for multiple turns. It's still hard to imagine this finding its way into constructed decks. Priests certainly won't use it, given how those 1/1s will poison the Resurrection pool. Warlocks will be the most likely to use this to help add to its zoo numbers.

With all of that said, Wrapped Golem is going to be a pest in Arena and you'll see it there quite frequently.

That's all for now! The expansion arrives tomorrow. Come back later tonight for a look at the new Saviors of Uldum quests and then come back tomorrow morning, as we Lightning Round through the remaining cards before the expansion's big release! Hearthstone: Saviors of Uldum is set to arrive this Tuesday, August 6.