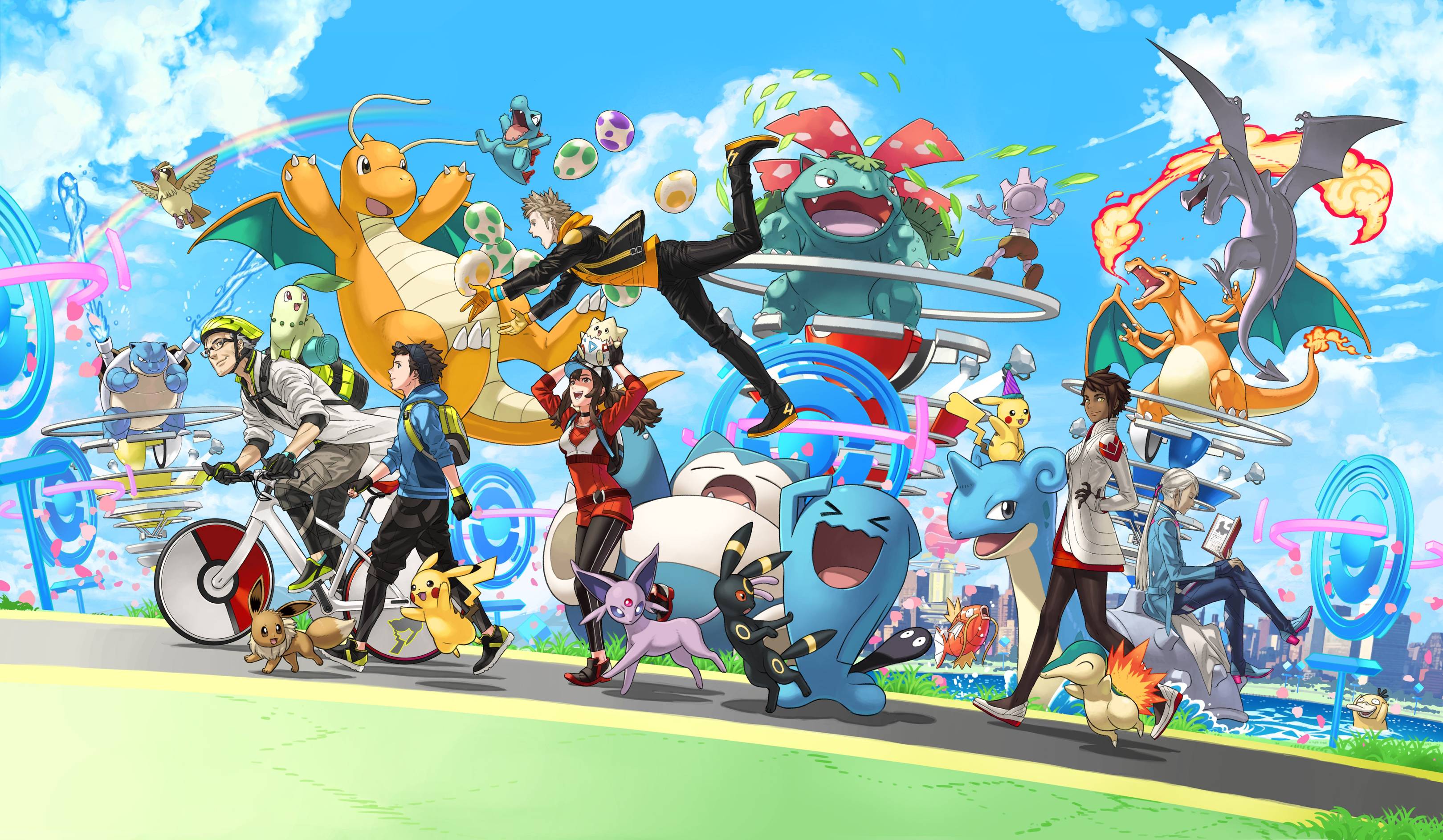 Shack Chat is back once again, our weekly feature each Friday where we’ll ask the Shacknews staff to give their opinion on a particular topic, then open the floor to our dedicated Chatty community to provide a diverse mixture of thoughts on the subject. It’s a great way for us to get to know one another better while inspiring healthy debates with all of you passionate gamers out there.

Pokémon Go not only my favorite free-to-play game, it is my favorite mobile game. I can’t believe how many times I end up coming back to this game. I love checking into new Pokéstops when I travel. They even made a real Pokéstop at GDC 2019. The new Snapshot feature has me coming back to the app just to take pictures with my favorite Pokémon. It’s a wonderful game that is free to play, and it is way cooler than the Harry Potter clone.

It was a hard choice between this and Kim Kardashian: Hollywood because I actually spent real money on that one. But whether I'm playing the mobile version or the Nintendo 3DS version, I'm always having a blast collecting new Pokémon and bursting through dungeons with the greatest of ease. Seriously, these "toy" Pokémon are absolutely adorable, too.

I’ve spent an astronomical amount of time exploring the world of Tyria since Guild Wars 2 originally released in 2012. As one of the first big MMOs that I got into, the game did a really great job of sucking me in and becoming my primary outlet for a long while. Now that the entire base game is free-to-play, there’s never been a better time to dive in and enjoy the glorious living world that Arenanet has created.

The game has plenty of quests and story for players to dive into, and even now it’s still one of my favorite MMOs to play. Sure, there are a couple of crappy aspects of the game (as with any MMO that goes free-to-play), but it’s still a really great world full of great mechanics and things to do.

I’d be lying if I didn’t say Counter-Strike: Global Offensive. I’ve been a huge fan of the base game for a long time, and I still find myself playing the latest iteration during long, sleepless nights. I wasn’t exactly pleased when Valve announced the game was going free-to-play, nor am I really thrilled about Danger Zone, the game’s battle royale element, but CS:GO still has the core action I crave basically two decades after first getting a taste. The infinite grind for medals and slowly trickling supply of weapon skins certainly doesn’t hurt the game’s replayability, of course — if anything, it helps to better serve the game’s new free-to-play status.

Team Fortress 2 - Chris Jarrard, Always wanted to be a raccoon

While I initially paid $50 for the right to play Team Fortress 2 as a part of Valve’s 2007 Orange Box package, the game was relaunched as a free-to-play product several years later. They could have charged $250 to play the game and I would have still jumped at the chance. Team Fortress 2 is probably my all-time favorite online multiplayer experience. From late 2007 to the end of 2009, most of my free time was spent on cp_granary or pl_goldrush.

The art style remains timeless, with the game looking as relevant today as it did nearly 15 years ago. Each of the 8 character classes has an iconic outline that is burned into my retinas, along with their library of quotes and quips. I made more than a few lifelong friends playing the game and still occasionally drop into a server with the Shacknews community. The game still plays just as well as it always did, even if there 5000 hats now.

I don’t get a lot of time to play free-to-play games, and I’ve played few that manage to keep my attention. Recently, Apex Legends dominated my game time, but I was inevitably drawn away to new releases and AAA titles. So while I certainly love it, nothing has quite affected me as much as League of Legends.

I’ve quit playing League for some years now, but when I did play, it was a daily occurrence, for many hours a day. I spent a whole bunch on skins, which felt good because I could actually see them as I used my favorite characters. It also avoided the dirty loot crate that so many games have fallen to. Plus, there was a new champion every 3 months and major game updates that shfited the meta.

League of Legends was certainly one of my favorite free-to-play games, but I can’t go back to that needle.

Ever since discovering Super Mario Bros., I’ve been in search of games that are easy to pick up and just as easy to put down. The sort of games you play while waiting for a table at a restaurant, riding public transportation, or, yes, fine, answering nature’s call. Combine that with the fact that words are on my brain 24/7, and Word Connect remains my free-to-play game to beat.

I pick this game up throughout the day. When I wake up, I tick off daily challenges. Before I head out on errands, I’ll solve a puzzle or three. It’s mentally engaging, yet simple enough that I can put it down when I need to get back to work.

Heroes of the Storm- Greg Burke, Lives in the mines

Heroes of the Storm. I have over 400+ hours and can easily get lost in the game after each match. Blizzard did a brilliant job removing everything I didn’t care for in games like League of Legends and DOTA, last hitting, shop visits, gold currency. Getting yelled at in chat for buying a “wrong” Item, or killing an enemy or minions when you’re supposed to let “damage” do it, just a bonkers design choice in my opinion. HOTS does away with all that nonsense, and focuses on team fights, split pushing and objective based gameplay. I have a lot of time in that game, more than I should.

World of Tanks - Bill Lavoy - Not Good at SMM2

After giving World of Tanks a try, it surprised me in just how much depth and complexity it had for a free-to-play game. Sure, you can hop into any old tank and shoot at things and that’s fun, but the game has a very steep learning curve that can take thousands of battles (rounds) to master. In fact, it’s not uncommon to run into players that have 30,000 battles under their belts, and trying to master just one tank can be a bit overwhelming.

That being said, I really don’t dig into a lot of free-to-play games. No Fortnite or Apex Legends for me, and Destiny 2 is still not technically free, so I’ve got to exclude that one. I have a feeling that I’d really dig Warframe, but for now it’s World of Tanks by default.

There is no free-to-play game that has provided me with more content and excitement than Fortnite. I originally started playing as a holdover as I waited for PUBG to get ported to Xbox. I soon fell in love with the light hearted aesthetic and quick paced action in Epic Games spin on the battle royale formula.

Fortnite feels like a living and breathing game. Every week there’s something new to see. New game modes, new weapons, and wild events. There’s also a constantly unraveling narrative and mystery about the battle royale island that’s fun to follow and speculate about.

Fortnite gets a bad wrap, but it’s on top for a reason. If it can continue to reinvent itself and find ways to retain player interest, it’s going to stay there.

I love Warframe so much and if I’m not playing something for work, it’s this or Rocket League occupying my time. I originally started framing because I bought a PS4 at launch and there wasn’t much else going on. It was enjoyable enough and I really dug the art direction a lot. But then Digital Extremes gave Warframe a total makeover that took a moderately successful franchise and made is something truly noteworthy. Since then, they’ve gone on to add open-world environments, a ton of new frames for players to try out, and they’re constantly updating the graphics to make it look even more polished. The game is showing no signs of slowing down from there thanks to the upcoming Empyrean expansion that should add epic space battles to the roster.

What, you thought I was going to answer with something else?

What still amazes me about Hearthstone being one of my favorite games ever is that I'm not even a World of Warcraft guy. I don't have a lot of attachment to WoW lore like other Hearthstone players might. The lore is simply a bonus and, in fact, I've come to enjoy that Hearthstone has crafted its own spin on Warcraft lore, like it's Earth-2 Azeroth.

No, I've come to love Hearthstone because of its simplicity, the way card synergies and interactions work, and because of the manner in which Blizzard takes advantage of the digital medium to allow for unique video game elements that can't be otherwise incorporated in a physical card game. Hearthstone continues to bring me joy on a daily basis and will continue to do so for years.

And when competitive Hearthstone is at its best, there's nothing in esports quite like it.

Disagree with our picks? Think we're a bunch of clowns? Let us know in the Chatty below.

Shack Chat: What do you want to see from Microsoft acquiring ZeniMax/Bethesda?

Weekend Console Download Deals for Sept. 25: The geese are back!
Login / Register