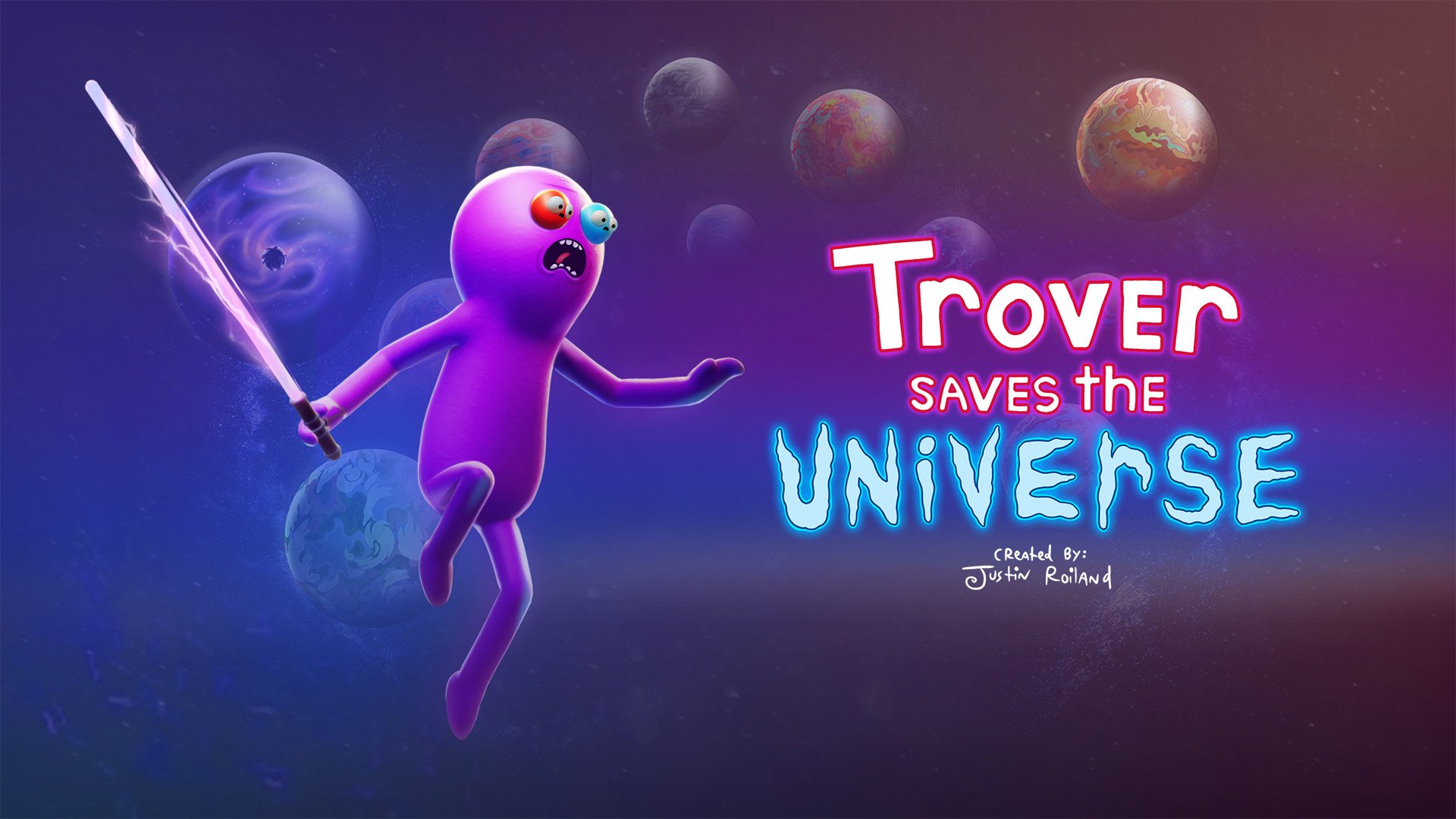 Squanch Games may have spawned from the creative ambitions of Rick and Morty co-creator Justin Roiland, but making video games requires more than ideas. That’s where Squanch’s CEO Tanya Watson steps in. Tanya has been working in video games for over a decade and her accolades include executive producer credits on titles like Gears of War 2 and 3 and Fortnite. With their powers combined, they make a pretty solid team that has ideas and the know-how to execute them properly.

Now, Justin, Tanya, and the whole team at Squanch Games have released their first title Trover Saves the Universe on an unsuspecting world. We had a chance to catch up with the pair to discuss how they and their team worked together to make a solid VR gaming experience. We also get to learn a little bit about Justin’s dogs and Tanya’s transition from Epic to Squanch.

Shacknews: What steps did you take to make sure players have a comfortable VR experience? Does the fact that you’re floating around in a chair resolve the locomotion issues that many VR games face?

Justin Roiland: We were thinking about VR sickness from day one. We fine-tuned the speed at which you rotate, the speed you travel from warp node to warp node, the speed and distance you pop up and down. All were fine-tuned and playtested. Free movement tends to make a lot of people sick. Implementing the “Warp Node” method casts the widest net for folks to be able to enjoy an adventure moving through worlds/ maps without motion sickness.

Tanya Watson: Trover was designed for VR from really early on. That meant that we wanted to make sure that people had the most comfortable VR experience as possible. Additionally, we wanted to make a 3rd-person action platformer, and we knew that the majority of those games in VR were not comfortable experiences (due to the floating camera causing motion sickness). Another element that was critical is that the story was centered around you, and the silent protagonist Chairorpean was born. Turns out he was critical to the story as well :).

Shacknews: How long into development did you realize that the game would work on a flat screen as well as in VR? Did that pivot affect development in any ways? What did the third person gameplay of controlling Trover open up from a design perspective?

Tanya: We were about a year in. We were playtesting on PC anyway, so there was some work going into PC controls to make testing easier. Once that happened, people were happily switching back and forth between VR and flat, and we realized that this game worked really rather well regardless of the screen you were using. We’ve always been focused on comedy, and turns out, comedy works well both in VR and on TV.

The third person controlling of Trover allowed him to be the voice in your head. You’re still in control, 100%, but he’s going to talk about whatever is on his mind, and that opens up to a lot more comedic moments. Additionally, it just felt really good to control him in that way, to have combat in first-person and close to the camera, or below the player. It really worked out well (we think).

Justin: About halfway, through development, we realized the game played great on a flatscreen. All we did was start prototyping some adjustments on controls so it wasn’t a huge pivot. We played with FOV and some other stuff and we were pretty blown away at how strange (in a good way) the flatscreen Trover experience was. All in all, it remained the same game.

Shacknews: There’s a whole lot of talking in Trover. How many hours of dialogue did the game ship with? A lot of VR titles struggle from being too repetitive in their gameplay. What have you done to keep the gameplay feeling fresh?

Tanya: Our playtesters reported 6 to 8 hours for a golden path playthrough, not counting collectibles and additional interactions tucked away for curious players to discover. With over 20 hours of mostly improvised audio, even the development team is hearing new lines as they play. We wanted to make it feel like a (really long) playable episode of Interdimensional Cable -- loose, fun, and weird with gameplay that sets the stage for comedy.

Shacknews: Video games and TV, especially animation, in particular, have a lot of crossover disciplines, but they are two very different worlds. How did your two skill sets meld together and what have you learned from working with each other?

Justin: I’m the crazy idea guy and Tanya is the foundation. All the stuff I’m terrible at, Tanya took onto her plate. I do not envy her. She wears a lot of hats… especially in the early days. I’m busy dreaming up everything from game design, stories, characters, and everything in between. It really is a fantastic partnership and none of this would be possible without both of our contributions.

Tanya: My favorite thing about working with Justin was giving him pretty much carte blanche to come up with ideas that he thought would be fun or funny. My role is and has always been to prop up the creative people and ensure that their ideas really shine through as best as we can. Sometimes it’s not always POSSIBLE, but we try. Due to that, he gets to be 100% focused on just the creative, and I get to be 100% focused on the how, and that makes our relationship super compatible. I trust him to make it fun, and he trusts me to get it done, and it’s a wonderful thing.

I’ve learned from Justin to let things breathe. I worked in previous environments where everyone was reactive and judgemental (we could never do that because…), and our culture at Squanch is very improv, very “Yes, and...” That was something that I had to work on because really, it means a much more collaborative and creative environment. When you can [push] each other and get excited about ideas. Even if they’re not technically feasible, it doesn’t matter, there may be a nugget in there that’s super exciting and new, and he opened me up to a whole slew of those things.

Shacknews: Justin, it seems like you had your hands in just about every aspect of this game including concept and character design, and you also voice acted a hefty amount of characters, including the titular Trover. How did you manage to pull that off on top of all your other obligations?

Justin: I couldn’t have done anything without all the absolutely insane talent I am partnered with across all my projects.

Shacknews: Where did the idea of Power Babies come from? Why do they eat each other?

Justin: Oh man. I have no idea. I think I was stoned on weed edibles, to be honest. I hate to admit that, but I think that’s the truth. They eat each other because it’s how they roll, man.

Shacknews: The dogs in Trover are based off your own real-life pets and their influence is present in your other works as well. Can you tell us a little about them? What are their favorite treats? Have they seen the game yet? What did they think of it?

Justin: My little guys are like my kids. Jerry is 12, and Pup Pup is 11. They actually love Dasuquin which I recommend all dog owners give to their little dogs to help with joints and whatever it does. I’m not a vet. But yeah, these dogs are the loves of my life. They sleep with me every night. I tried to show them the game, but they don’t really seem to care. They can’t see it probably.

Shacknews: Is the Trover-verse in the same multiverse as Rick and Morty?

Justin: Everything is in the same infinite multiverse as everything else! Take THAT, copyright laws!

Shacknews: Tanya, you worked on several well-known titles during your time at Epic Games, what’s the transition from that environment to being CEO of an indie studio been like?

Tanya: Being an EP at a company like Epic Games is almost like being a CEO of an indie company, except you have stability: The support and backing of the studio that you work for. The primary similarity is that you do whatever needs getting done, but as an indie, you have no money, so you fill in a lot of gaps that don’t directly relate to making games. Such as making websites, getting business insurance, picking up trash or rearranging furniture, and that is OK. If it’s what needs to get done, you do it, especially if it’s important for the team. I wouldn’t trade it for anything. I loved working at Epic, but it’s definitely different. At Squanch, we are a family, and I’d do anything for this team.

Shacknews: What direction would you like to take Squanch Games in post-Trover launch? Do you plan on focusing solely on in-house development or will you be courting other indie devs for possible publication?

Tanya: Right now, we’d like to focus on doing some post-launch experiments with Trover. We’re hoping that it’s successful enough to allow us to make more hilarious experiences. From there, we’ll see. We’ve got a number of things on the horizon, and depending on how Trover does, that will dictate how our strategy moves forward. We hope everyone loves it as much as we do.

Trover Saves the Universe is available now for PS4 and PSVR and June 4th on PC. Be sure to check out more details on Squanch Games over on their official website.