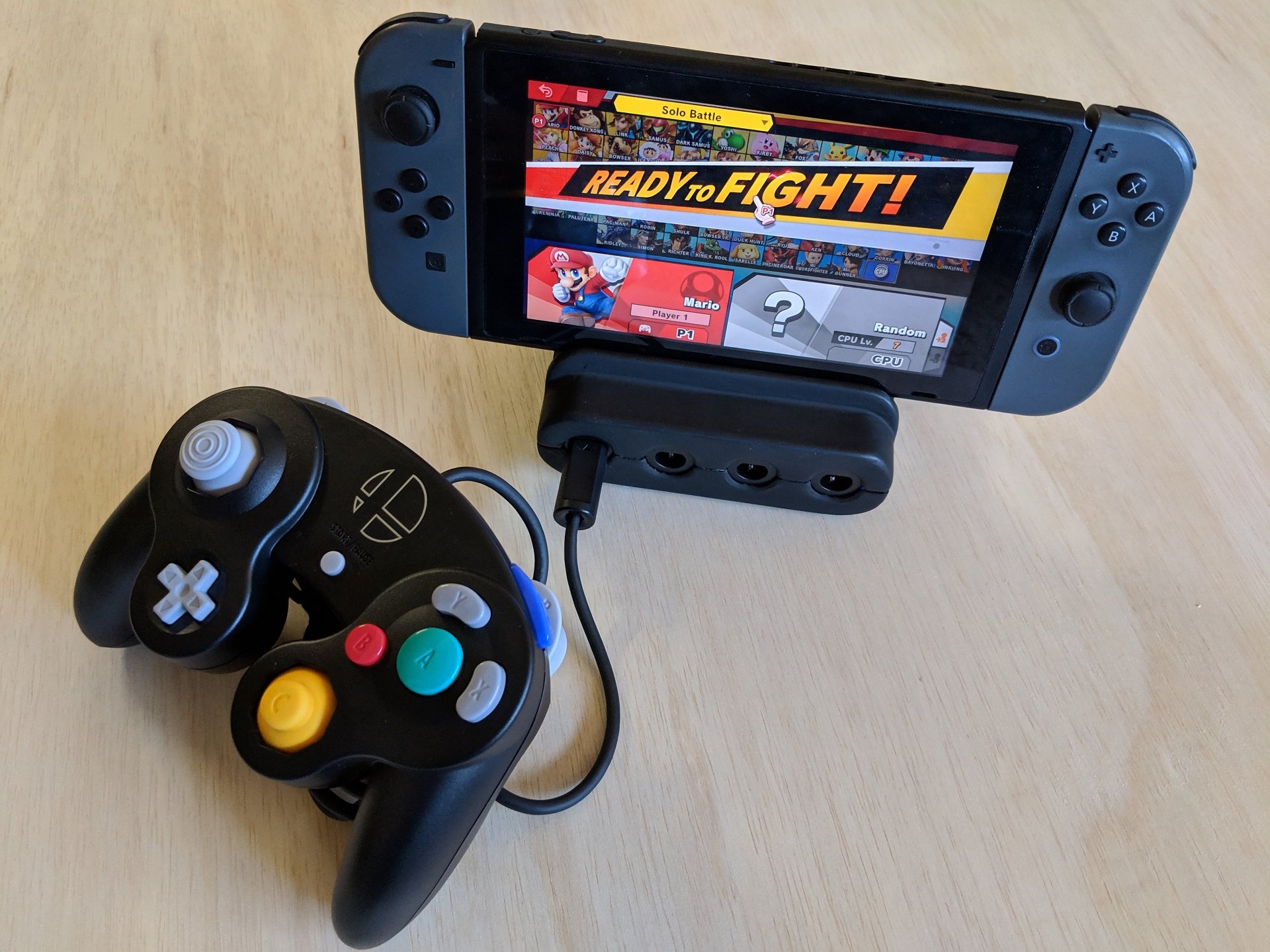 With the release of Super Smash Bros. Ultimate, veteran Smash players have been scrambling to either pick up their old GameCube Adapter from their Wii U days or find a whole new one for their Nintendo Switch. After finding the adapter, hooking it up becomes a simple matter of connecting it to the two USB ports alongside the side of the Nintendo Switch dock. But what if somebody's looking to play with their GameCube controllers in Handheld Mode? Well, that's when things get a little messy. There's clutter, there are extra hubs, there are wires everywhere, and it turns into more of an inconvenience than anything else. That's where the folks at Panda Global and Gearhawk Studio are stepping in to help.

Stand + adapter in one. Playing your Switch on the go with your GC controller has never been easier.

On Wednesday, Panada Global unveiled a new piece of hardware called the Ultimate GameCube Adapter. The idea here is that while it might look like a standard GameCube Adapter, it has a stand built in to prop the Switch upright and a dock to read the GameCube controller connection.

It looks like a miracle of modern convenience, which is why Shacknews reached out to Panda Global to ask a few questions. Speaking to Panda Global CEO Alan Bunney, we discussed the Ultimate GameCube Adapter's design, how they've avoided the possibility of bricking, and why Panda Global opted to go the Kickstarter route.

Shacknews: What can you tell me about the Panda Global Ultimate GameCube Adapter that you're developing? What exactly is it and how does it work?

Alan Bunney MD, Panda Global co-founder and CEO: The Panda Global GameCube Adapter is specifically a GameCube controller adapter for the Nintendo Switch that also functions as a stand for traveling, and has a charging port in the back as well if you wanted to charge while playing in handheld mode.

We don't have any HDMI output because third-party docks with visual output have been known to brick the Switch in the past, so we didn't want to take any chances!

We're looking into the possibility of adding a USB port (or two) as well as an Ethernet adapter, but we'll see.

Shacknews: How long has this been in the works? When did this idea first come about?

Bunney: Matt [Samperi, Gearhawk Studio owner] first approached us about the idea a month ago. He had been working on it for five months and needed some help to get it to market and make a splash. We immediately hit it off and realized that not only was Matt's design fantastic, but his outlook for developing future products really synced with ours. So we decided to join together and make the Ultimate GameCube Adapter a reality.

Shacknews: I'd like to ask about the stand element. I've seen stands that don't quite work or are hit-and-miss. How is this stand designed to prevent the Switch from flopping over backwards?

Bunney: The wide posterior to the base and rubber grip feet actually help balance the unit quite nicely. We’ve played on our prototype on all sorts of surfaces — even in a plane with turbulence! — and haven't gotten close to have the Switch topple over.

Shacknews: I see that the Nintendo Switch charger connects to the back of the device to help this act as a charging station. Does the device affect the charging time at all?

Bunney: The device itself is powered by the Switch, so the current adapter does not add any more time to charging than using a regular Nintendo adapter.

Shacknews: I've seen horror stories of third-party docks that can brick Switch consoles. You're assuring users that this device will not do that. How is Panda Global and GearHawk working to ensure that this device does not brick their Nintendo Switch?

Bunney: We've decided to remove extra functionality from the dock specifically because of reports of bricking. There is no HDMI port for that reason, as it's the cause of third-party bricks. Instead of taking a chance on hoping we can get it right, we decided to go the safest route to ensure 100% that our adapter cannot cause any issues like that.

Shacknews: How has the competitive Smash community reacted to the device's announcement? Has anyone offered feedback?

Bunney: They really like it so far! Now that Smash is out and people have started to travel more, they are seeing the issue with trying to play on the go. The Switch is designed for that, but as a serious player, you can't easily set up and practice.

A lot of people are asking to add an Ethernet port as well, so we are going to look into the possibility if we can do that without raising the price much.

Shacknews: Given the myriad of issues that this product addresses, why go the Kickstarter route? Why not go straight into mass production?

Bunney: As much as we love the competitive Smash community, we know it's a niche market. We want to do things right and stay grassroots for now without having to mass advertise it everywhere. Who knows! If this does even better than expected then maybe we can skip the Kickstarter next time we make something cool for our communities.

Shacknews: Do you anticipate this device finding appeal beyond the Smash community, particularly given that Nintendo patched the Switch to allow for GameCube controller use across the board?

Bunney: Maybe! Right now there are people who have done lag tests on multiple types of controllers, and the least lag has been seen with the GameCube controller. If there are people who care about the most responsive controls, then they may also like our adapter. Of course, if Nintendo ever makes a GameCube virtual console, I think this product would instantly have a much bigger market.

Shacknews: When do you hope to launch?

Bunney: The Kickstarter is aiming to launch early to mid-January. People can sign up for our email list at Panda Global and they’ll be eligible for an early bird discount when we go live!

Look for more news on the Ultimate GameCube Adapter as it arises. Be sure to follow Alan Bunney on Twitter at @PG_SamuraiPanda, along with the rest of the team at @PandaGlobal.